OCZ Technology has been a player in the performance CPU cooler market for a long time, even since the dark ages of overclocking when the surest way to improve a heatsinkÃ¢â¬â ¢s performance was to put a bigger, louder, faster fan on it. In those days, OCZÃ¢â¬â ¢s offerings consisted of the Dominator, Glacier, Gladiator, and Goliath (which featured an 80mm fan Ã¢â¬â an uncommon thing at that time). Then for a long time, not much came out of OCZ in the way of CPU cooling, as they focused upon their memory products.

Recently, however, OCZ has re-entered the CPU cooler market with renewed vigor, with three new heatsink/fan models Ã¢â¬â the Vindicator, the Vendetta, and the Vanquisher (the newest of the three). All three models represent the changing landscape of cooling technology, with slower, quieter fans and larger, more efficient fin structures made possible by heatpipe technology. 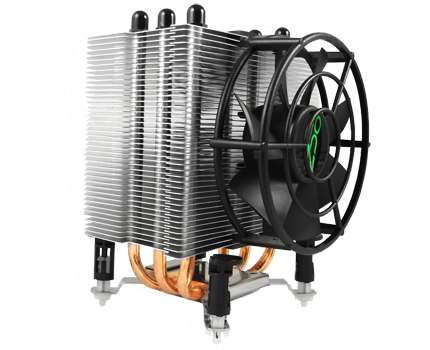 The Vanquisher is the newest addition to the OCZ cooler arsenal, and features the same vertical Ã¢â¬ËtowerÃ¢â¬â ¢ design as the other models in the lineup. ItÃ¢â¬â ¢s similar in design to Arctic CoolingÃ¢â¬â ¢s Freezer 64, of which Thermaltake also has a clone. (OCZÃ¢â¬â ¢s Vindicator tower-style cooler is also very similar to a pre-existing design, the Scythe Ninja.) And as we all know, following an established formula isnÃ¢â¬â ¢t a particularly innovative way to design a product, but it can predictably yield a good result. OCZ also provides a 1-year warranty on their coolers, for extra peace of mind should you somehow wind up with a dud.

In this article, weÃ¢â¬â ¢ll put the Vanquisher cooler to the test and evaluate its thermal and acoustic (noise) characteristics. Is the vanquisher a must-have or an also-ran? 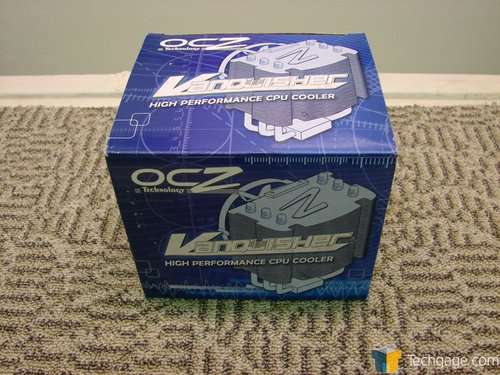 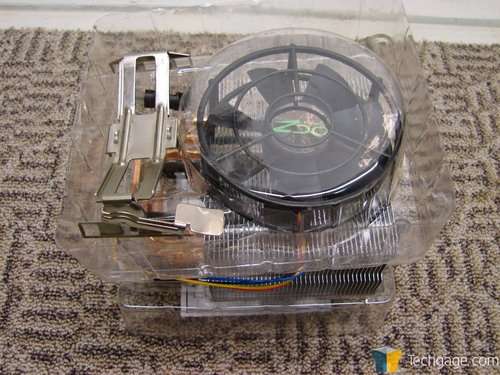 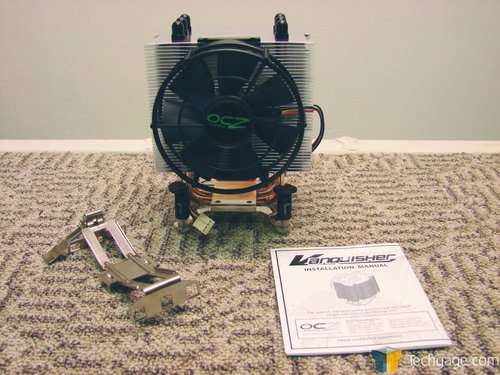 The Vanquisher cooler comes in a small cardboard box with blue artwork and a short list of the productÃ¢â¬â ¢s features. Inside, the cooler is cradled in a PET shell, while an additional plastic shell protects the pre-applied thermal compound. The hardware bundle is light Ã¢â¬â the cooler comes with its LGA 775 brackets pre-installed, while the Socket 754/939/AM2 clip is packaged separately. 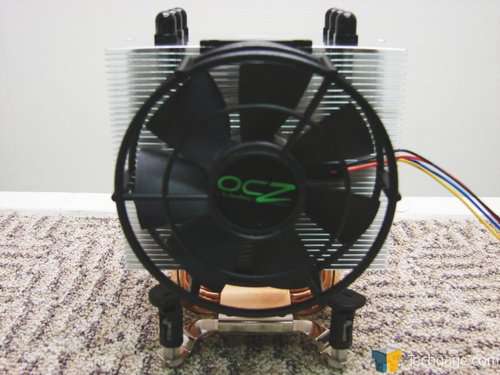 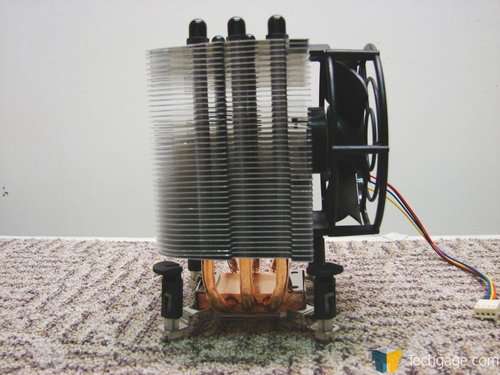 The Vanquisher cooler is a tower-style heatsink, with a 92mm frameless fan that spins at 2500 RPM at full blast. Frameless fans are said to produce lower turbulence noise at the trailing outer tips of their blades. The fan features a round guard to keep wires inside the case (or errant fingers) from being caught up in the fan blades, and a 4-pin PWM power connector. The fan is physically mounted at its hub directly to the fin assembly Ã¢â¬â removal of the fan will require disassembly of the fin structure itself. 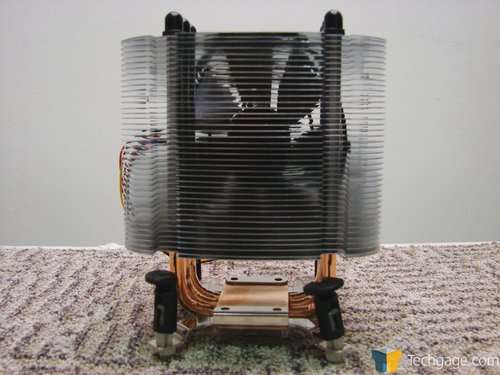 The VanquisherÃ¢â¬â ¢s fan also uses a Ã¢â¬ËceramicÃ¢â¬â ¢ bearing system Ã¢â¬â a variation on the typical sleeve bearing. Sleeve bearing fans fail when the lubricant seeps out of the bearing journal, but ceramic journals retain the lubricant through capillary action in the porous surface, extending the fanÃ¢â¬â ¢s life when compared to traditional sleeve bearings and enabling the fan to be installed with a vertical orientation without shortening its life. 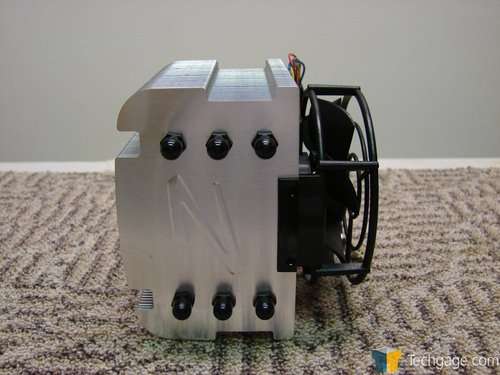 The Vanquisher coolerÃ¢â¬â ¢s heatsink uses three 6mm copper heatpipes to transfer heat from the copper base to the aluminum fins. The aluminum fins are spaced about a millimeter apart, which isnÃ¢â¬â ¢t particularly tight or loose spacing, though itÃ¢â¬â ¢s enough to present a low airflow impedance to the fan. The fin bodyÃ¢â¬â ¢s shape doesnÃ¢â¬â ¢t have anything in particular to do with airflow Ã¢â¬â itÃ¢â¬â ¢s purely cosmetic. The heatpipes are capped at the ends with plastic pieces, which have a tendency to fall off Ã¢â¬â I found two of them rattling around in the box when I first unpacked the cooler, and they fell off again while mounting the unit. 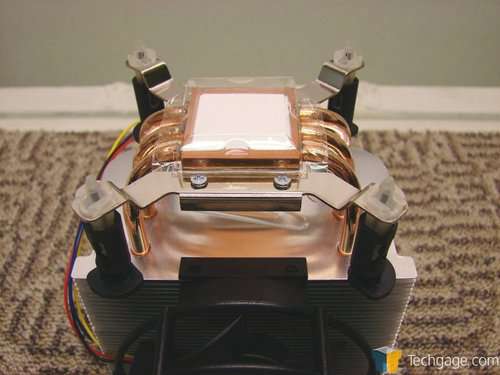 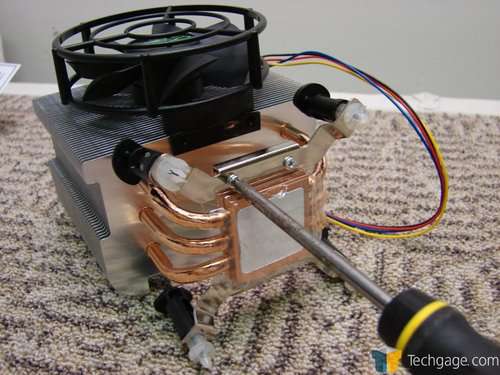 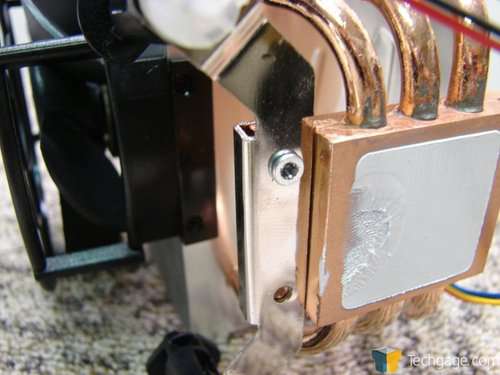 The test platform for this review is a Socket AM2 CPU and motherboard. However, the Vanquisher cooler comes from the factory with the LGA 775 bracket attached. The two-piece LGA775 bracket is attached with four small screws. Three of the screws came out easily, however to my dismay, my screwdriver cut through the fourth screw like butter, hopelessly stripping its socket. I had to take the unit to a friendÃ¢â¬â ¢s house to drill it out. This isnÃ¢â¬â ¢t a deal-killer, but be sure to use caution when removing the screws. 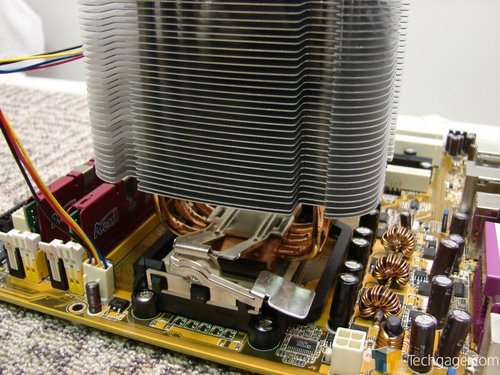 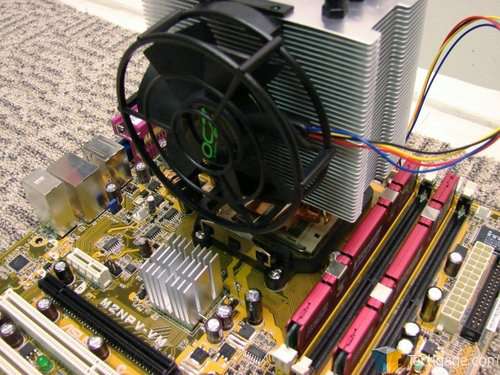 The Socket AM2 clip rests on top of the copper base, and centers itself with a pair of lugs that fit between the three heatpipes. Unlike some coolers weÃ¢â¬â ¢ve seen, the VanquisherÃ¢â¬â ¢s AM2Ã¢â¬â ¢s retention clip is a flip-clip design thatÃ¢â¬â ¢s easy to install. While the LGA775 bracket allows your choice of mounting orientation (front-to-back airflow is typically best in most cases), the Socket AM2 clip only allows the cooler to be installed in the orientation of the motherboardÃ¢â¬â ¢s mounting bracket.

Next, letÃ¢â¬â ¢s look at how the Vanquisher fared in our performance testing.

OCZÃ¢â¬â ¢s Vanquisher promises high-performance cooling for budget-minded enthusiasts, and boasts an impressive feature set for its price. ItÃ¢â¬â ¢s also pretty sharp-looking as well Ã¢â¬â no one can say that the Vanquisher fails to look the part. However, these claims are nothing if the performance isnÃ¢â¬â ¢t there. Here, weÃ¢â¬â ¢ll test the thermal performance of the unit, and also assess its noise output. We donÃ¢â¬â ¢t expect the Vanquisher to obliterate its high-dollar competition from the likes of Zalman and Scythe Ã¢â¬â rather, we use a stock Athlon 64 CPU heatsink as our reference point. While performance champions come and go, the stock Athlon CPU cooler is like a bellybutton Ã¢â¬â everybody has one. 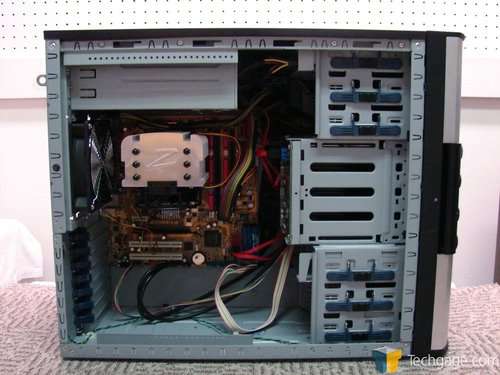 The test rig for this test is our trusty modified Cooler Master iTower 930. Essentially, itÃ¢â¬â ¢s an iTower 930 server case with every unnecessary component removed. While our photos depict the case with its side panels removed, all testing was performed with the side panel in place. The modified iTower 930 provides the same level of system airflow as a typical enthusiast PC, with a 120mm rear case fan and a PSU that also has a 120mm fan.

In all testing, the ASUS Q-Fan thermal CPU fan control and AMD Cool nÃ¢â¬â ¢ Quiet were both disabled. To ensure a level playing field for both heatsinks, we wiped whatever thermal compound was on the bottom of the Vanquisher and tested both heatsinks using Arctic Silver 5, with a ball-bearing-sized amount spread into a thin layer using a razor blade. Each heatsink was tested by first allowing the system approximately 30 minutes to reach its idle temperature, and then hitting the system hard with a round of 3DMark06, with the peak CPU temperature being reached at the end of the second CPU rendering test. 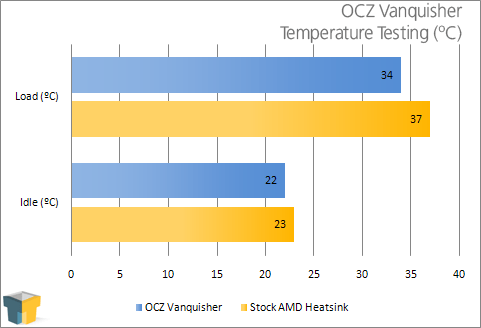 At idle, the difference between the two heatsinks is minimal Ã¢â¬â only a single degree. However, when the system was loaded heavily with the multithreaded 3DMark06 CPU rendering test, the VanquisherÃ¢â¬â ¢s lead increased to three degrees. While these margins arenÃ¢â¬â ¢t huge, remember that testing was done with a low-power processor, instead of a fire-breathing 120-watt quad-core behemoth. In terms of percentages, the OCZ Vendetta manages an 8.1% temperature decrease when compared to the stock AMD heatsink. This performance doesnÃ¢â¬â ¢t exactly blow the doors off other coolers weÃ¢â¬â ¢ve tested Ã¢â¬â but itÃ¢â¬â ¢s respectable nonetheless. 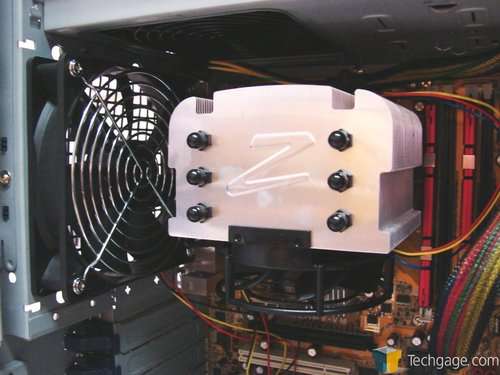 Its noise output easily dropped below the noise floor of my quiet test room Ã¢â¬â with all other noise sources shut off (including HVAC). Therefore, by our standards the Vanquisher qualifies as a Ã¢â¬ËsilentÃ¢â¬â ¢ product. We realize this is a fairly subjective standard, but itÃ¢â¬â ¢s the standard we feel is most likely to be applied by anyone without expensive measurement equipment.

There are lots of pretenders to the Ã¢â¬ËsilentÃ¢â¬â ¢ title out there Ã¢â¬â manufacturers who unscrupulously brand their products as Ã¢â¬ËsilentÃ¢â¬â ¢ when they barely qualify as Ã¢â¬ËquietÃ¢â¬â ¢. WeÃ¢â¬â ¢re pleased to report that the OCZ Vanquisher is not one of these Ã¢â¬â for a modest processor with low TDP, the Vanquisher is a great option for silent cooling on a budget. In fact, even under full load on our test rig, the Vanquisher kept our 65-watt CPU at positively chilly temperatures. WeÃ¢â¬â ¢d recommend this cooler for users who value silence, and donÃ¢â¬â ¢t aggressively overclock their rigs, though we have no doubt that the Vanquisher could support a respectable overclock in exchange for a slight increase in noise. The 1-year warranty is also appreciated Ã¢â¬â the warranty is long enough to protect against most bad units. 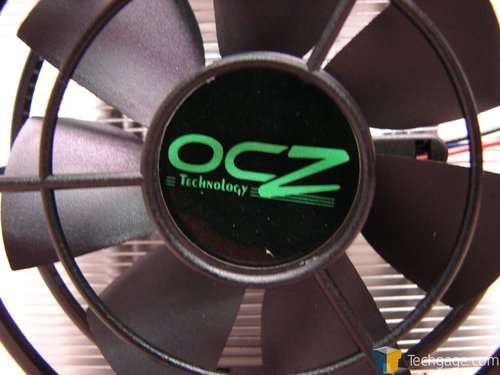 Our experience with the Vanquisher cooler was bittersweet, however Ã¢â¬â we did manage to accidentally strip out one of the screws that attached the LGA 775 brackets, and the Socket AM2 mounting clip didnÃ¢â¬â ¢t allow us to choose the direction of airflow (we prefer front-to-back, not vertical). Also, the VanquisherÃ¢â¬â ¢s fan isnÃ¢â¬â ¢t removable or replaceable Ã¢â¬â if you donÃ¢â¬â ¢t like the fan, youÃ¢â¬â ¢re stuck with it. And if the fan fails out of warranty, the whole cooler goes in the trash. For a bit more money, you can have the OCZ Vendetta, which offers a similar 92mm ceramic-bearing fan (which is replaceable), and a more optimized fin structure.

Overall, we feel that the OCZ Vanquisher is an excellent value, and definitely deserves your highest consideration where excellent thermal performance with low noise is desired. We award the OCZ Vanquisher an overall score of 7/10, because we did manage to break it, and we had a few beefs with aspects of its Socket AM2 clip, but in the end we find that its merits outweigh its faults.