Fantasy mingled with technology, a mix that has begun to see more mainstream use in RPGÃ¢â¬â ¢s to date. Ar tonelico, Melody of Elemia, is just such an RPG and yet appears to offer so much more. With all the elements of a classic RPG and new ones to boast Ar tonelico, it looks like it can satisfy that RPG itch.

Ar tonelico, Melody of Elemia, is a vast new gaming world of mixed futuristic and ancient technology, and there is only one tower and two floating islands left in the world of Sol Ciel. Below is a sea of poisonous clouds and the deadly plasma above called the ‘Blastline’, the world in the sky is small and isolated. Yet thanks to the legacy of an ancient civilization, the tower of Ar tonelico, life was peaceful. In days long since past the world still had its lands and skies, the people had constructed a great civilization under the goddesses, the Trio of Elemia. But now, so much has changed…

And that’s the prelude to the gaming world of Ar tonelico, NIS America’s next PS2 release since Disgea 2. As a leader in fantastically set role playing games, NIS America has become an icon for publishing classic yet innovative games, and Ar tonelico promises to be yet another great title to add to their lineup. I’ve played several games by NIS America; Atelier Iris 2, Makai Kingdom Chronicles, Generation of Chaos, and Disgea 2, and I can honestly tell you I have not been disappointed by any of them.

Getting Ar tonelico in hand I was anxious to get started on sharing with all of you the world of Sol Ciel and share with you the kind of game play that NIS America has come to be known for. So take a seat, and read on fellow gamers! 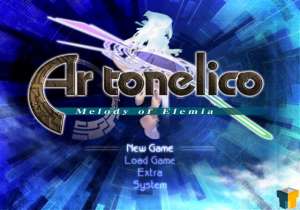 Beginning your tale you start as the lead character, named Lyner Barsett. He was born in the city of Platina, located in the upper levels of the Tower. As a Knight of Elemia, he protects Shurelia, the administrator of the tower. Yet one day new strains of viruses from the tower appear, and they can’t defeat them by normal means. So Lyner is sent to find a mystical artifact to stop these new viruses, which takes him to the Lower World.

Movement in the game is quite linear, being that you can’t actually ‘move’ about the world map freely. The world of Sol Ciel is not very large, so this method of movement is understandable. Instead destinations are highlighted on the map for you and you can jump from one spot to the other with relative ease. For some this may be a plus because you don’t have to traverse the world map for hours trying to find things. Yet it also pulls down the ‘adventure’ aspect of the game, having your locations easily accessible. 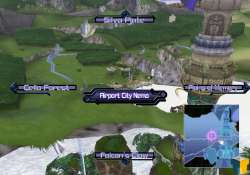 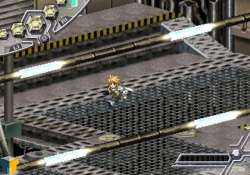 Towns in the game are set up similarly, your character not moving around the town itself to find things, but a list of places being available for you to go to. By selecting one of the places from the list you can enter that location. When in these locations your character can move freely, yet this movement is limited to that specific area. Certain areas will pull you into the story mode when you use them as well, and new areas become available the further you progress in the game. I personally enjoy traveling through a town, learning where things are, finding hidden items and such, so this was a bit of a let down for me. Such small things make the game seem too linear.

The maps for each ‘field’ area are nicely detailed 2d style backgrounds. When in these locations you can move your main character throughout, talk to people, and encounter enemies. Unlike the typical random battles in most RPG’s Ar Tonelico features an encounter bar that shows you when your threat level is low or high. As you walk around this bar will fluctuate from blue to red, red meaning you have a higher chance of encountering an enemy. As you defeat enemies in each field the bar will slowly deplete itself until there is nothing left, and then no more enemies will appear. This can be especially helpful when you are searching the map for hidden items, for you can take your time. Yet it also makes it hard for your character to level up swiftly to take on harder foes. 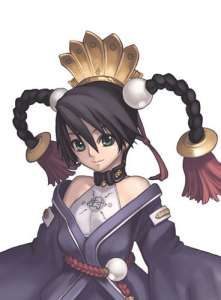 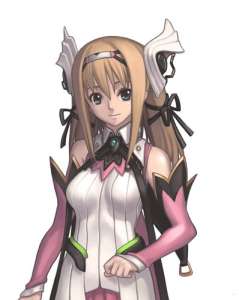 During Lyner’s adventure he’ll meet two Reyvateil, Aurica and Misha. Aurica is a third generation Reyvateils, whereas Misha is a pureblood. These beings are a rare species of beings that use songs, or ‘hymns’, to perform magic to aid the group. When in battle the Reyvateil sing songs to help aid the group. These songs can range from offensive to defensive, giving the front line characters stat bonuses, healing and so on. The Reyvateil cannot attack physically, and so the main characters that do the butt-whooping have to make sure that the Reyvateil are protected. Enemies love to target the Reyvateil and so you’ll have to use your front line to block attacks that would harm them. Also, as the Reyvateil sings she loses mana and once out she passes out. It is emphasizes that you need to care for your Reyvateil, so much so that if one gets hurt you about have a heart attack. Just like traditional RPG’s, and even MMO’s, it’s always wise to protect the mage, and in this game it is no exception.

The battle engine is like most would expect an RPG to be, and it executes it well. There were a few animation glitches I didn’t like, especially when Liner’s arm and sword are positioned over his face when he is in battle stance, but that’s just the artist in me complaining. As stated before the Reyvateil are relatively weak, and are used to help the group with their songs. They are positioned in the rear while the main crew does all the hacking and slashing in front. If a Reyvateil is attacked they can be extremely damaged due to their delicate bodies. They also lose all the power they had been building up. In order to protect the Reyvateil you can guard against an attack, and sometimes it takes the entire front line to do so. But, if you do a successful guard you can do a counter strike, which will increase your Harmonics Gauge. 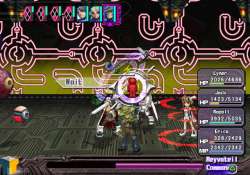 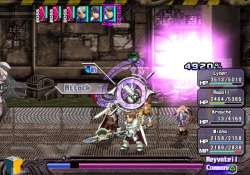 The Harmonics Gauge is the colored bar at the bottom of the screen, and can increase or decrease due to certain factors. The left side of the bar is for the fighters and the right side is for the Reyvateils. This gauge is a link that the Reyvateil has with the melee characters and when a melee character, such as Liner, completes a skill move against an enemy the Harmonics Gauge goes up, creating Synchronization. As this bar fills the group is given a host of stat bonuses, such as increased attack and shorter casting times. If party members are damaged or the Reyvateil is hurt/passes out, the meter decreases.

The last thing about the battle system is the Ambience Field, where the Reyvateils hold sympathies for the fighting characters when they do normal attacks, giving them bonuses, and also increasing their own song power.

As you progress in game Lyner can gain new skills and costumes in battle when he connects to the two Reyvateil. This connecting is called Diving, and in order to do so you’ll need to access Dive Shops around the world. Throughout your journeys around the world you’ll get opportunities to talk with the Reyvateil when your team is resting, and learn things about them that you can use when you Dive.

There are also discussion topics you can find hidden throughout the world, to give you more opportunities to talk to Misha or Aurica. By Diving Liner can deepen his relationship with the Reyvateil, by helping them with personal issues that they normally wouldn’t share. When Diving Liner helps the Reyvateil get through their fears and emotions, and in return strengthens his bond with the girl and opens them up to gain powers that they normally wouldn’t gain on their own. It sounds a bit odd for an RPG, I know, but it is one of the largest aspects of the game, and adds to its unique factor. It’s like an RPG/dating sim meshed into one. Truth be told the Reyvateil are the actual focus of the story, more so than Liner. 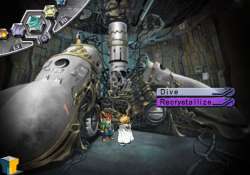 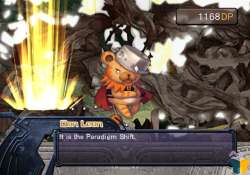 This soul space is also known as the Cosmosphere. In order to gain access to the events in the Cosmosphere you’ll need dive points, which you can gain by killing enemies in battle, just like gaining experience points. Each action you make within the Cosmosphere will affect the Reyvateil you are in link with, so you have to be careful, for decisions here can change the entire story.

The look of the game is alright; I have no issues with 2D games, and often find the 2D platforms much more enjoyable than the 3D ones. Perhaps it is the old school gamer in me, but the style is nice, and although I did have a few issues with the character stances in the battle screen, having a hard time reading and accessing the combat menus due to the way they are positioned in combat. There are some instances where you get confused with the backgrounds, as pathways can be hidden by overlaying images. Things do get repetitive when it comes to the backdrops, but that’s to be expected in most games. The backgrounds are overall enjoyable. I love the artwork for the characters, it is really well done. 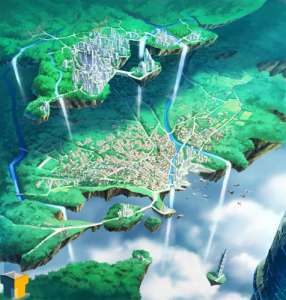 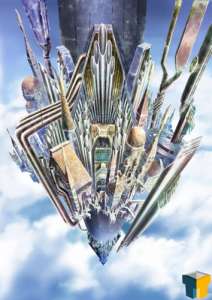 The soundtrack is acceptable, although there were a few points where I was completely disappointed, and wanted to gouge my ear drums out in frustration. For being such a music focused game there were quite a few songs that just grate on your nerves after a while. Mainly the battle theme, for whenever you entered battle you’d hear this decent music, then as the song progressed there was this rap voice overlay that just completely killed it. It just didn’t set the mood, and for the theme of the game it was not something I expected to hear. The opening theme song is good, and the animated sequence that played with it was great. Many of the songs the Reyvateil sing are pretty and appealing, which somewhat makes up for the few horrid songs throughout. Some of the voice acting was a bitÃ¢â¬Â¦ off, yet overall it was acceptable. 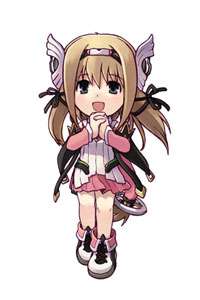 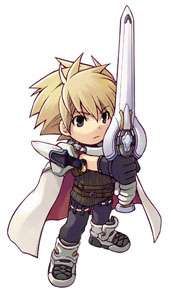 Overall Ar Tonelico is an enjoyable game, with an interesting set up and storyline. I didn’t really get to explain the crafting system at all, which is called Grathmelding, nor the majority of the history in the game, but I’m sure none of you want to read a novel, and if you do there is always the game guide, or just play the game and find out.

Although I found the story to be a bit straight forward and not overtly complex the interaction with the characters was a plus and was rather fun to go through. The game picks right up and goes straight into the action at the beginning, and it keeps you interested for the most part. I have yet to beat the game myself, but I do know there are multiple endings, for as I mentioned before your interactions with the Reyvateil are important, and what you do can change the outcome. I don’t think it will appeal to a vast audience, but those who enjoyed the Atelier Iris series will find this game just as enjoyable.