Seagate is a company that’s been around for quite a while, but their presence is becoming more and more intact as the days go by. A week doesn’t seem to go by without seeing their name in the news. A few months ago, we took a look at their 160GB mobile beast, the Momentus 5400.3. Even though that HDD came out months ago, it is still the largest 2.5″ drive on the market, and has no competition. 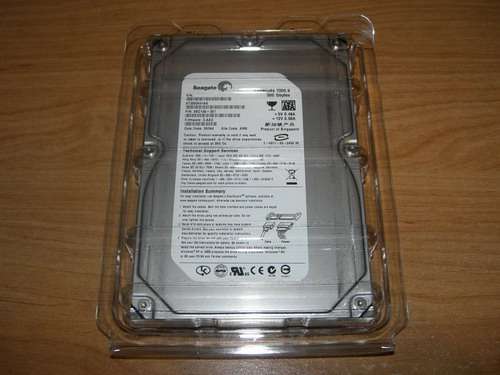 Just last week, they also released their massive 750GB desktop consumer drive which once again takes the top spot. If you are curious as to how they managed to fit so much data into the same sized frame, you can read our explanation here. So you may be asking yourself.. why are you reading a 500GB review when there is a far superior, and large hard drive already on the market? Well, according to current $ per GB calculations, the 500GB costs around $0.12 per GB less than the 750GB. That’s pretty substantial. 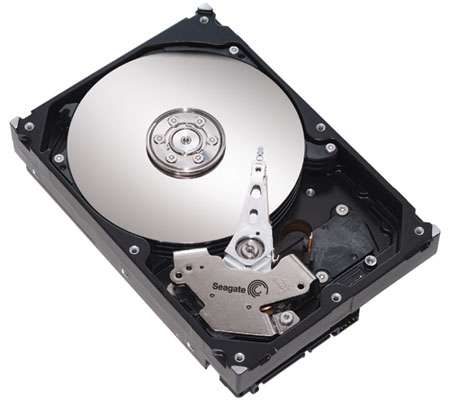 Back in the day.. I remember buying a brand new 8GB HDD for only $300, or around there. At that time, it was actually more than enough. I was able to install all of my games and applications, and still have plenty of space left over. It was a common theme, that after buying a new hard drive, it would easily be able to satisfy you. That was before digital entertainment became such a stature in our daily lives though. In a day where music collections can amount to hundreds of GB’s, games can take 10GB for a simple complete install, and DVD movie backups are second nature, we are always looking for more, and more storage. 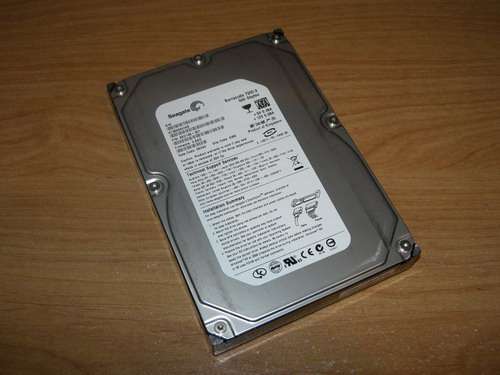 Even just a few years ago, the thought of your computer having 1TB (Terabyte) of hard drive space was ridiculous to consider. Of course, it’s hardly ridiculous anymore, and all you need are two of these drives we are looking at today. Of course, due to the 1024 byte issue, the drive is around 500,000,000,000 bytes, or 476,937MB. After the benchmarking and testing was completed, I took a shot of the drive using PartitionMagic, to show the total size. 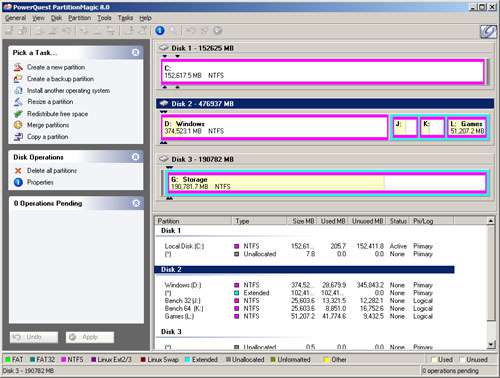 I doubt I will need to get into the nitty gritty of what a hard drive is, or how it works. What does this drive do that some other’s don’t? Well, not too much really. Unlike the new 750GB drive, this one does not use the new Perpendicular Magnetic Recording, simply because it has no need to. Shared by other Seagate drives is the NCQ feature, or Native Command Queueing. Essentially this is technology that allows the hard drive to receive more than one I/O request at a time, and performs them in an order that it deems best. This feature is available on their S-ATA drives only, so the ATA version of this drive will not include it.

This drive is also equipped with a 16MB Cache and a S-ATA 3GB/s capability. 7200RPM has been the norm in terms of drive speeds for a while, and it seems to be staying that way for the time being. You’ll also notice mention of a 3-D Defense System, though I really have no clue what it is. It’s related to data protection, but a search at the Seagate website brought forth no help. 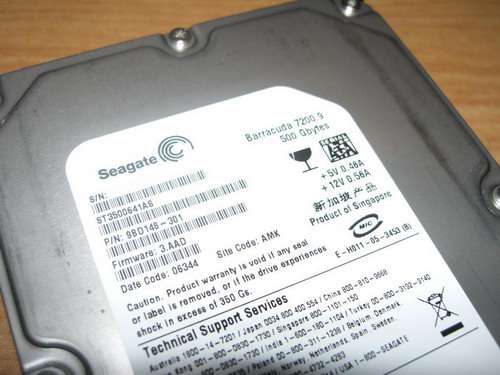 I received an OEM version of the drive for review, so there is no retail box. After tearing the bubble wrap off, it revealed the drive in a plastic blister case. This case is designed in a way to allow for some safety if you do happen to drop it. It bubbles out at various points all over, so if it hits the ground, there’s a good chance not too much damage will be done.

As mentioned earlier, this is the S-ATA version of the drive, although the ATA version shares the same stats and latencies. Without further ado, let’s get into the testing. )

To test out this beast, I ran it through many different tests, including real world. I didn’t have another S-ATA drive on hand, so I compared it to my primary drive, an ATA Western Digital 160GB 7200RPM 8MB. Before testing began, both hard drives were completely formatted with all partitions cleared. To completely clear my 160GB drive, I ran Darik’s Boot and Nuke for a single pass. This program essentially overwrites all data bits on the hard drive to help them become unrecoverable. Of course, we are not worried about data recovery here, which is why I only used one pass. 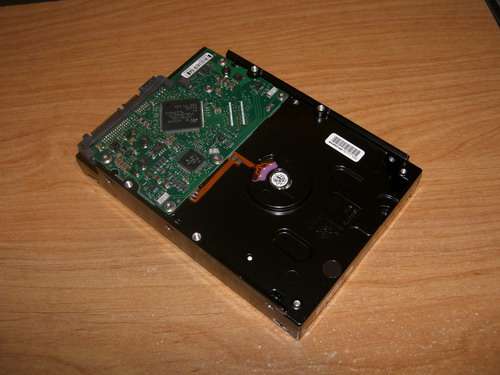 Here is the list of tools I used for testing the drive, in case you want to test out your own:

Let’s jump straight into the benchmarks!

Since I had two fresh drives, I figured I would see which one installed Windows the fastest. The end results are only approximate, but should not be within 5 seconds different of the actual value. The version of Windows I used was Media Center Edition 2005, which spans two CD’s. For some reason, installing with the 160GB drive, I had to swap the discs less than with the 500GB. Why? I have no idea. Here are the timelines:

After removing the prompting for different discs, the entire installation took around 1,038 seconds, or 17.3 minutes.

After removing the prompting for different discs, the entire installation took around 759 seconds, or 12.7 minutes. 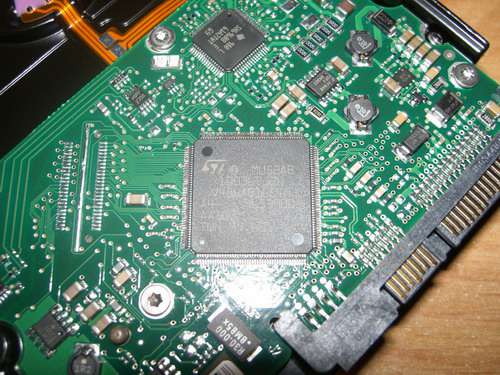 It’s interesting to note the ATA hard drive had the fastest Windows install. It required less disc swapping, but that’s not why. If you note the timeframe, the S-ATA took a longer time performing the same tasks. So, the ATA drive is the winner here.

HD Tach is one of my favorite storage benchmarks, mainly because it’s quite in-depth. It can give you a result for a burst rate, average and a latency. 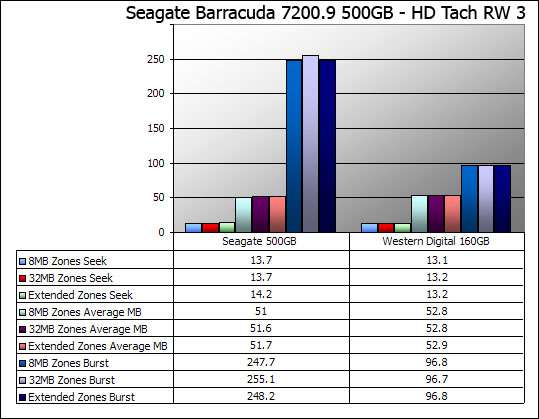 Our WD 160GB beat out the Seagate 500GB slightly in the latency and average MB’s. The 500GB brought on incredible burst rates, however.

HD Tune is not just a benchmark, but a great tool for checking up on your drives health. Under the health panel, it will be able to tell you how many hours your hard drive has been running for. The benchmarking portion can give us similar info as HD Tach 3, but instead of a simple average, it can also give us a minimum and maximum. 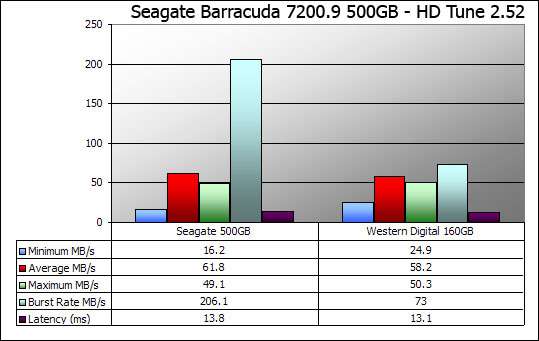 This time around, the Seagate beat out the WD 160GB in the average MB/s area, but lagged short in the Min and Max. Again, a crazy Burst rate is exhibited here.

PC Mark has a very interesting way of benchmarking storage. Instead of using a ‘normal’ Min/Avg/Max scheme, they take various aspects of everyday computer use and turn them into a benchmark. Note that the final PC Mark in the graphs have a decimal, but the real score does not. The decimal was added to allow the other bars to show. 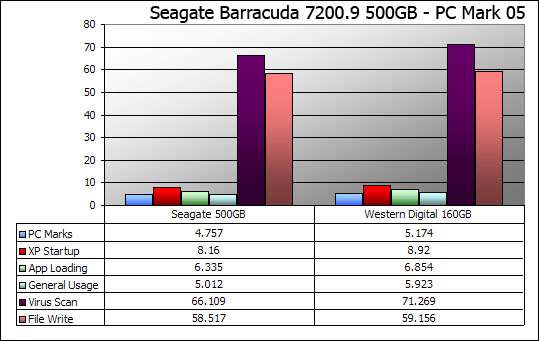 Once again our ‘little’ drive has taken the cake in all areas. It seems that having such a smaller density proves helpful in benchmarks.

SANDRA 2007 was just released the other day, but all of the benchmarks were performed prior to that. From now on, 2007 will likely become the SANDRA standard in all of our benchmarking. 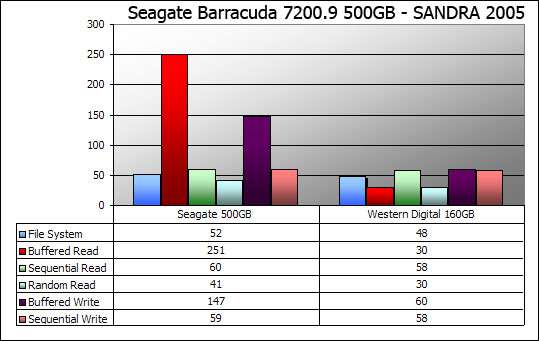 The burst rate on the 500GB drive is very consistent throughout all of our benchmarks today. This is the first benchmark, however, that shows the 500GB beating out the 160GB in every single aspect. Let’s jump straight into our real world testing and our conclusions.

To perform real world testing, I took a huge conglomerate of files and timed the copies using the Windows clock on another PC.

In many of the synthetic benchmarks, the 160GB drive beat out the 500GB, but not here. The only test that the 160GB came close to matching was the extracting of 92 RAR files. I assume this is due to the fact that the end result was one file. When far more files are thrown into the pile, that’s when the 500GB drive deemed superior.

Seagate knows what they are doing, because they continue to impress. It’s too bad I did not have another S-ATA drive on hand, because it would have been a more accurate comparison, but the Barracuda definitely held it’s own. Despite coming short in most of the synthetic benchmarks, it rocked our real world tests. Chances are that going from ATA to S-ATA will vary in performance depending on your system. It’s odd that the 500GB took longer to perform some mundane tasks, such as the Windows installation, because it obviously kept right up to the 160GB in terms of speed.

Price aside, if you have a need for a large drive, you will not regret a purchase. I am giving the Seagate Barracuda 7200.9 500GB a 9/10 and our Editors Choice award.

If you have the urge to discuss this review, (you know you do), feel free to head on over to our related thread. You do not need to register in order to reply to our content threads!

May 8 Addendum: One important factor I forgot to mention in the review was the temperature readings. This should be mentioned, because this particular hard drive is one of the warmest on the market. Currently, during regular computer use, the drive sits at 47°C. This is a huge jump from the compared WD 160GB which after a benchmark, sits at 34°C. Despite the high temps, it’s not in a ‘danger zone’, but if you are planning to throw one in your SFF case, you will want to make sure you have excellent airflow to keep things running smoothly.