It’s been a pretty interesting couple of weeks in the tech world. With CeBIT kicking off, the GDC coming up and the launch of the 7900 from NVIDIA, the tech world is in full swing. If you think about it, that’s the beauty of the industry that we are in. It’s always moving, always changing, so there is always something to keep us occupied. Today I am focusing in on the power requirements of today’s gaming PC’s.

We gamers are a rare breed and as much as we may or may not want to be associated with these people, we are a lot like car jocks. We always have to have to best piece of equipment and we have to have it as soon as it comes out. Now for a lot of us, me included, we can’t afford every new piece of hardware to come off the line. We either save up or get the best "bang for our buck" so to speak. There is always one thing that comes to mind that most people that I talk to overlook. 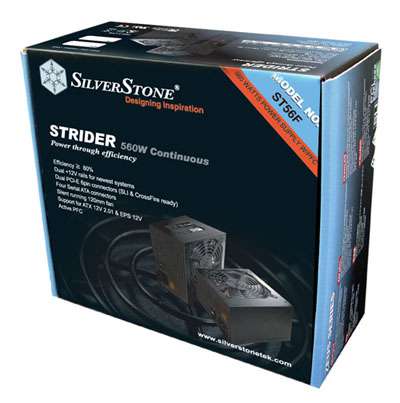 These are the hearts of our PC’s. They don’t do the thinking or the number crunching but they do supply the hardware that does said thinking and number crunching with the power for them to function properly. Power supplies have to be stable, reliable and ultimately good for everyday use. Some of us overclock, some of us don’t and that doesn’t matter at this point. What I am getting at is that out of everything that you spend your hard earned money on, that goes under the hood of your PC, should be a smart and safe investment. A bad piece of hardware won’t necessarily go bad but if it does, it can take other pieces of hardware with it and that’s not a chance that I am personally willing to take.

I have personally reviewed a few Silverstone products in the past with Techgage so I would like to think that we at Techgage and Silverstone have a good working relationship. This is proven true with the opportunity to take the Silverstone Strider ST56F Active PFC power supply.

The ST56F is a 560 Watt power supply with active PFC. While it lacks the actual logo, this PSU is NVIDIA’s SLI and ATI’s Crossfire ready. With the power requirements of 2 GPU’s, hard drives, optical drives, fans, motherboards, CPUs and anything else that can possibly plug in, we will need a powerful supply to feed all these pieces and keep them running at top level.

Let’s see what we can find out.

The packaging is what one would expect from a company such as Silverstone; Classy yet simple. The exterior of the box has a picture of the PSU on the front, along with the specs of the unit. The one spec that stands out in my mind is the SLI and Crossfire ready statement. This is important as we all want one or the other depending on what GPU we already have and from what company. I personally have a 7800 GT and will have a second one shortly, so the fact that this PSU is designed with 2 cards in mind makes me very comfortable going into this review. Let’s take a look at some pictures. 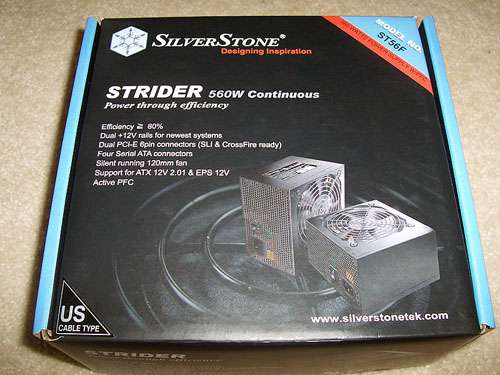 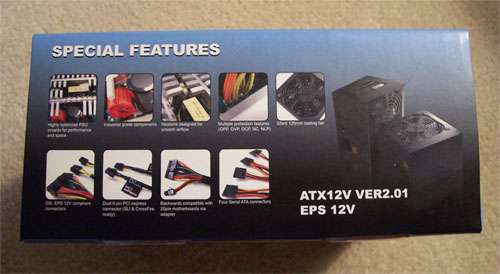 Now that we have seen the outside of the box, let’s move inward. After you… 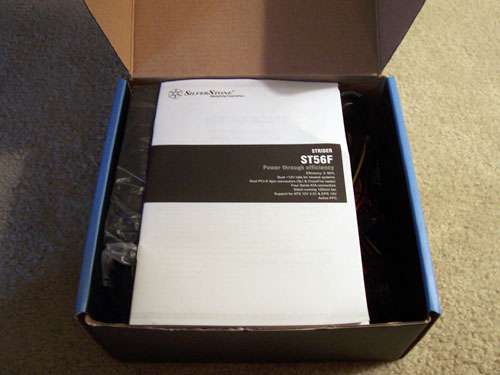 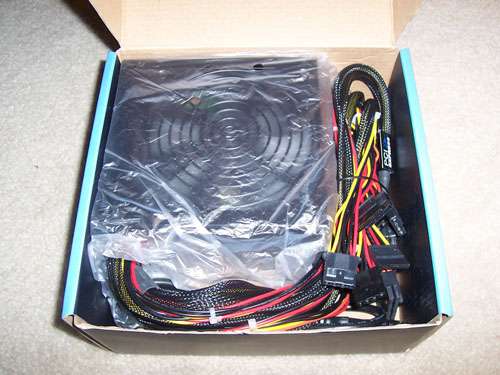 Now that we see how it comes packaged, let’s take it out and see what it looks like. 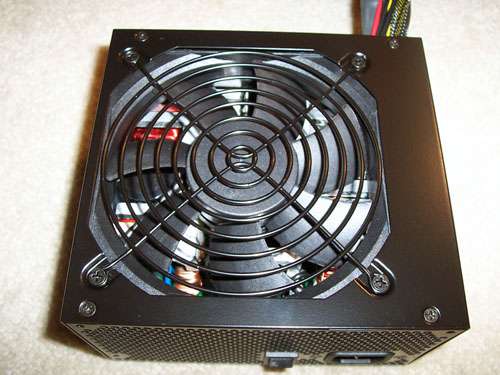 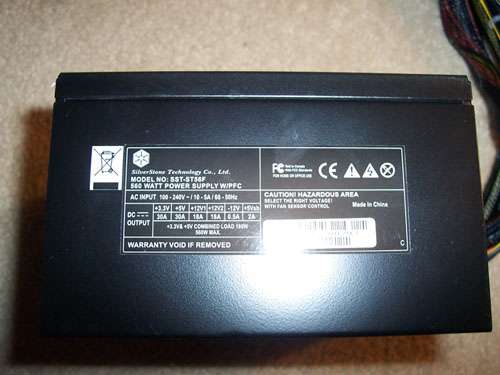 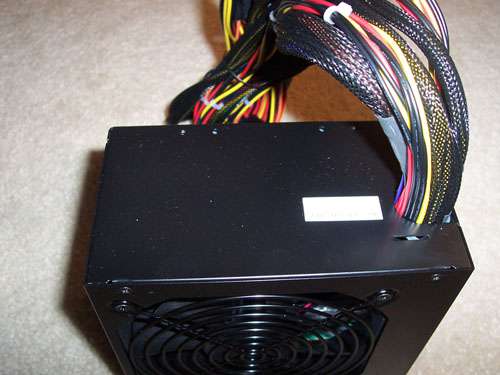 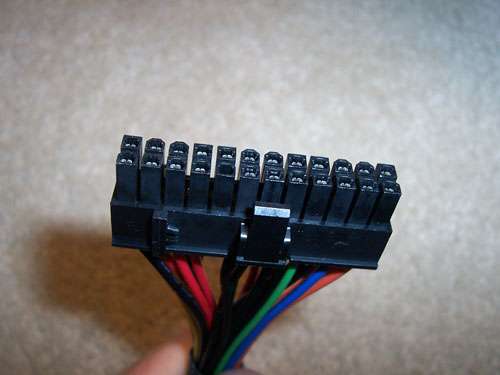 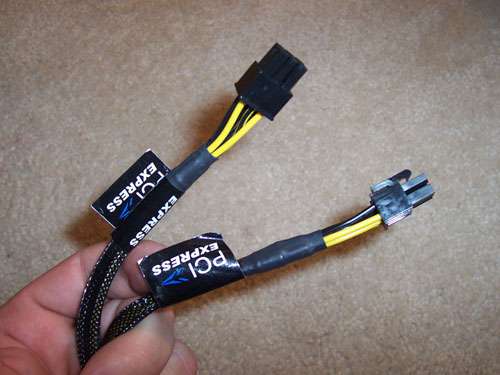 Before we get to the tests, let’s take a look at the information that Silverstone has provided on this power supply.

Well, there you have the PSU. How about we see what it can do in real world activities. I will be testing the ST56F in a few different ways. I will play a game or two of Far Cry* and see how it fluctuates as most of you out there reading this are gamers. I will also stress this by cranking up the fan speeds on all my fans, running SuperPi up 32M, accessing both my HDD’s by running HD Tach and playing a song off of the other one. I might as well charge my iPod for good measure.

The system that I am using is the same setup that I have used in all my other reviews. For those of you just joining in, here are the specs: 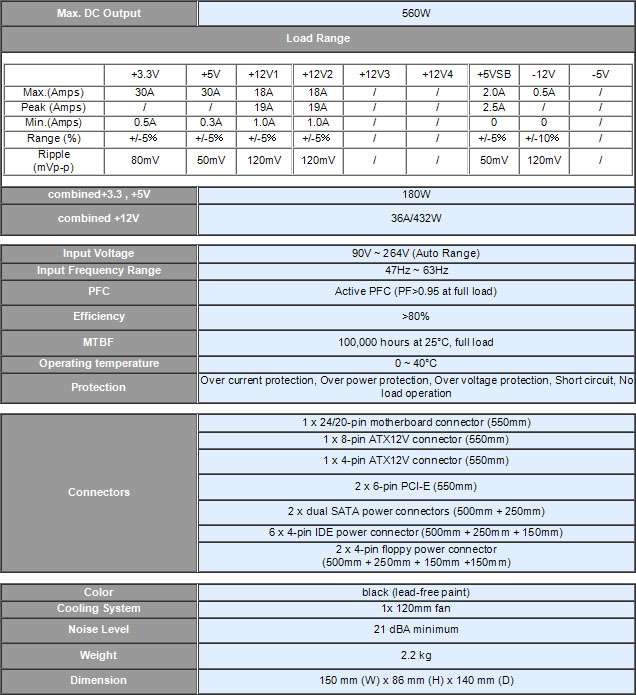 On to the results! 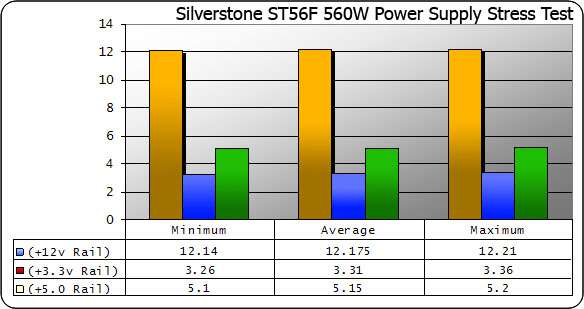 Those are pretty stable rails there folks. The rails stayed around where they should be and well with in the advertised range that Silverstone so to me, there is nothing to worry about. The rails were solid, the sound was virtually not there and the look is top notch. What’s not to love about this PSU? There is one more thing that I would like to mention about this power supply and that’s the fact that it does in fact feature active PFC. PFC stands for Power Factor Correction and what this basically means is that allows power distribution to operate at its maximum efficiency (according to endpcnoise.com.) To quote the same source again:

If you understood any of that, and for those that didn’t exactly follow, if you can afford it, active PFC is a better idea for your PC. I am not saying that you wont have any luck with a power supply with passive PFC because all of my power supplies up until this one have been passive but what I am saying is that a PSU with active PFC will provide your PC with "cleaner" power. 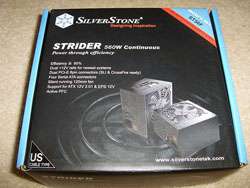 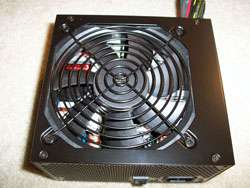 All in all, I liked this power supply. I actually liked it a lot. The presentation was good, with the box being attractive. The packing was tight and secure. The power supply preformed as it should. It lived up to my hopes and expectations. As good as the ST56F is, it is with down points. I would have liked to have seen all of the cables in sleeves and while I feel it is worth it, the 130 dollar (US) price can and will scare off a fair amount of possible customers. This isn’t a big deal because I have always thought that you get what you pay for and in saying that, I am not saying that you will get a PSU that will crap out and take your PC with it if it costs less than this one. What I am saying is that for 130 dollars, you are getting a damn good PSU that can handle most anything that you decide to throw at it.

You can pick the Strider ST56F at some etailers for just under $130. With that said, go get you one and see just how good a power supply can be.

I am giving the ST56F a score of 9 out of 10 possible with the only point missing going towards the steep price. This is a relative debate though because some will have no qualms with spending that but most will.

Thanks to Silverstone for once again working with us and allowing us to take a look at their ever improving line of products.

If you comments or questions about the review, we invite you to post in our related thread. You do not have to register in order to comment!