If you look around you’ll find that there are more brands of power supplies than you can shake a stick at. Some of them are really good while others aren’t even worth being hit with the aforementioned stick. Does the Spire Rocketeer IVSP-ATX-600W fall into the first or second category? Read on and decide for yourself.

Spire, makers of everything from coolers of every size and shape to cases to some modding supplies. They also market their own line of PSU’s under the Rocketeer nomenclature and today that’s what I’m taking a look at, a Spire Rocketeer IV model SP-ATX-600W which we can infer from the model number is a 600W ATX unit.

Let’s take a quick peek at what Spire says about this unit shall we?

The new Spire series power supplies give even the most demanding PC users a way to keep it cool. Housed in nickel coated enclosures, these power supplies feature multiple, low-noise dual ball bearing fans to ensure smooth and silent operation in the workplace or home office. Whether it is work or play, business presentations or games, applications can take center stage because they no longer have to compete with typical PC cooling noise.

Now, going by this we’d assume that the unit had dual fans which is hardly the case, it’s cooled by a single 120mm blue LED fan. Kind of odd that they use a generic description for their power supplies but we can hope that the unit itself is hardly generic. Speaking of the PSU, lets dive into it, shall we? 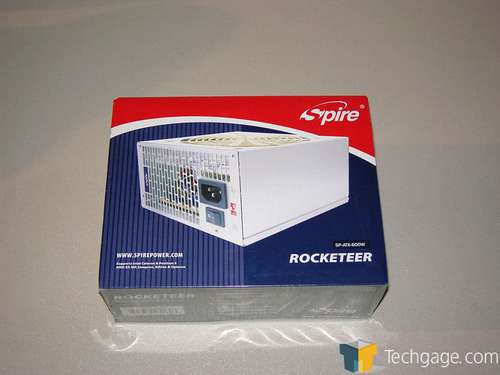 The packaging for the Rocketeer IV (from here on out referred to as the PSU or unit for simplicity’s sake) is pretty simple, with a shot of the unit on the front in full color. 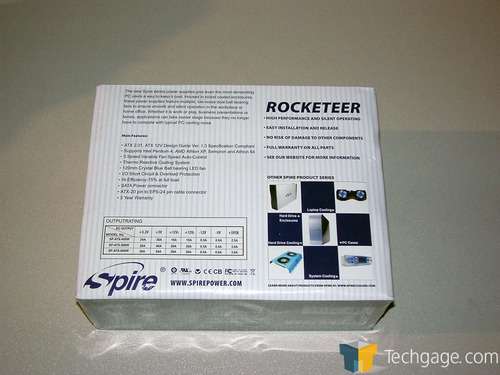 The back of the packaging lists the features and specs of the unit. It also highlights some of Spire’s other offerings. 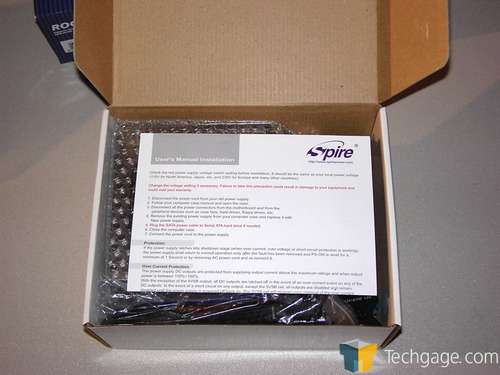 The color part of the box is a sleeve with a plain white box inside. Opening that box reveals the unit covered by the instruction sheet. 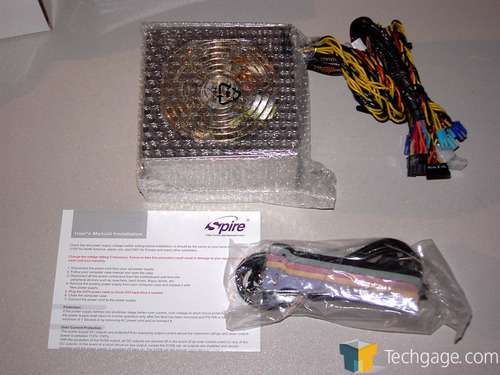 Once out of the packaging we see that Spire also throws in the obligatory power cable, a few screws (that are not seen) and some velcro cable wraps to secure unused leads. A nice touch to be sure although why they’re color coded is beyond me.

The unit itself doesn’t come packed in foam isolators as we’re starting to see in more and more units, instead it’s simply packed into a bubble wrap baggie. It’s actually a bit more environmentally friendly than using styrofoam and most geeks will be incline to hang onto the baggie to reuse it for shipping parts that they sell later. I would be happier to see the baggie made from the large bubble, bubble wrap rather than the small stuff since it would give better protection during shipping especially when subjected to the tender mercies of some of the parcel companies we have stateside. 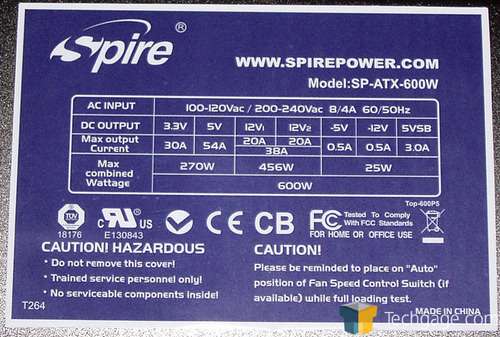 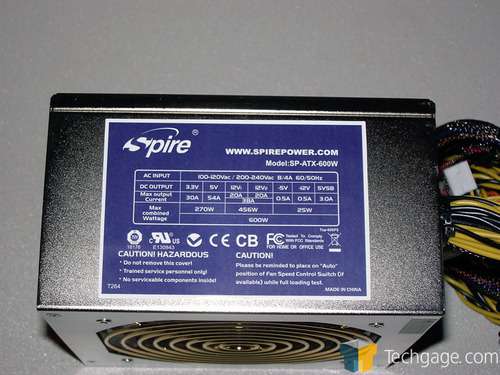 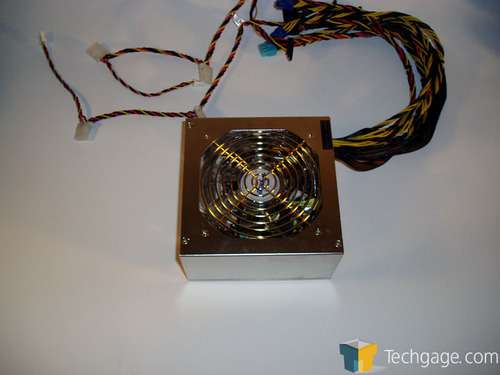 The unit is finished in a rough nickel finish and the fan grill provides about the only "bling" by being gold. In a world filled with "pretty" PSU’s the Rocketeer IV is decidedly plain. 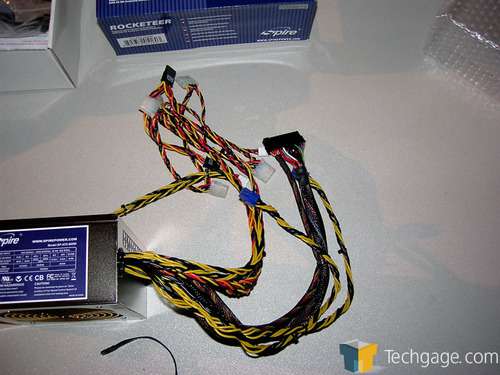 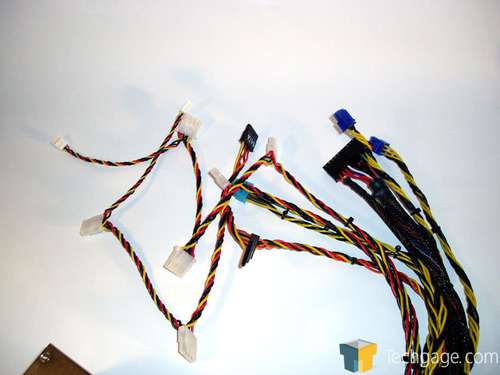 The cables are fairly long but only the main ATX cable is sleeved. The rest are twisted though so that helps to prevent them from coming undone in the case and creating a mess. Since we’re on the cables let’s cover the connector load out.

As we can see the Rocketeer is SLI capable for the cards that only require a single PCI-e connector. It has a decent load out for molex powered devices but the native SATA support is sadly lacking. Personally I like to see a minimum of four native SATA connectors on a PSU of this wattage caliber but I’d much prefer to see six. 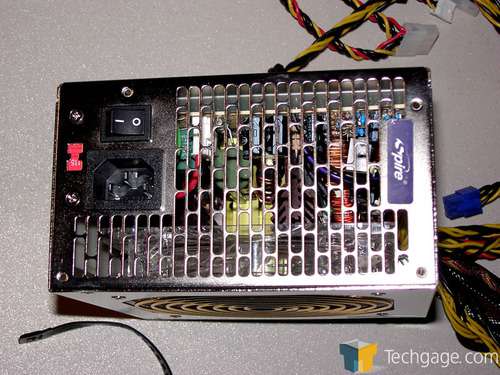 Finally we take a look at the rear of the unit to see how well the exhaust is implemented. As I said earlier, this is not a dual fan unit and this illustrates that vividly. The rear grill is very open and there should be a minimal drop in flow from the 120mm fan.

Let’s open this puppy up and see what it brings to the table. 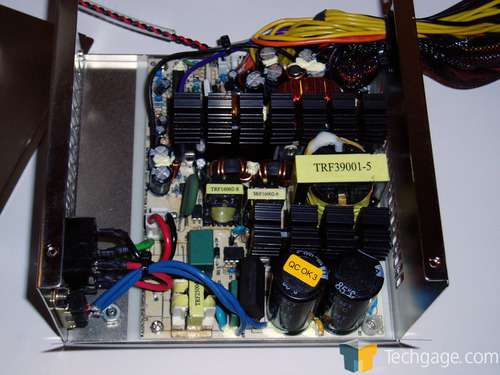 When we get the unit opened we see that it’s based on a Topower build and a low end one at that. The filtering on the AC side is minimal at best with nothing more than a pair of 1000uF caps. No chokes at all aside from one very small transformer towards the rear of the unit. This could bode ill for the performance of the unit as any noise on the primary side can find it’s way over the the secondary side in the form of ripple or AC noise on the DC outputs. 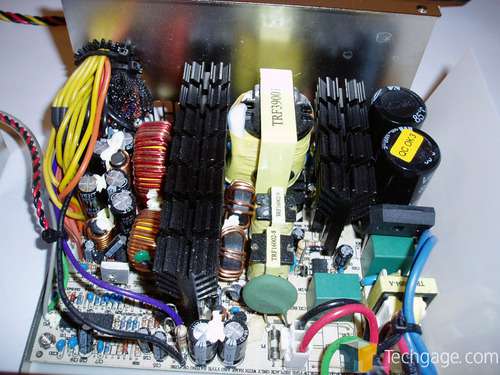 Judging by the simplicity of the design I’m leaning towards this unit being group regulated. This means that the regulation circuitry for the 12V pulls double duty by regulating the 5V and 3.3V as well. This means that when one set of rails is heavily loaded you can see the other set end up with elevated voltages as the regulation circuitry attempts to shore up the loaded rails. This is most apparent during heavy cross loads with more current on either the 12V rails than the 5V and 3.3V or vice versa. 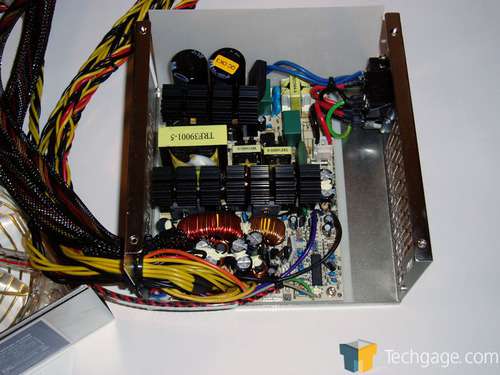 Another look at the secondary side of the unit. At least this side fares a bit better with filtering with a couple of goodly sized chokes and a smattering of caps. For those that are wondering, the caps are by Jenpo, a company that I’ve seen used by Topower before although the jury is still out as to the quality of their product. 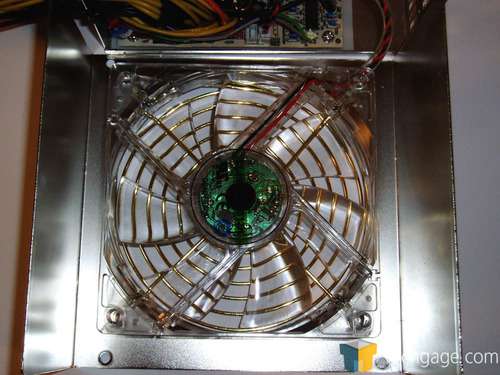 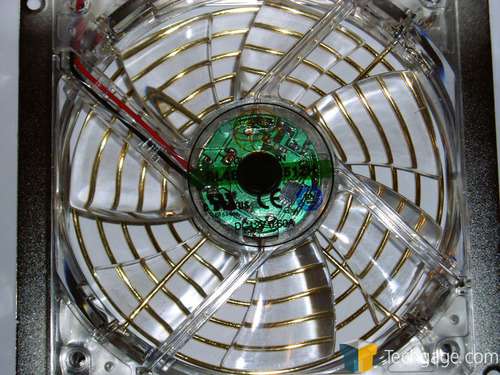 Cooling duties are handled by a Globefan that’s rated at 93CFM. Since Spire lists this unit as being silent I can only assume that the fan control circuitry is pretty aggressive as to the voltage being supplied to the fan. Globefan lists this fan in the upper thirties as to db output versus Spire listing the Rocketeer IV at a mere 19db. I will say that during testing the unit never got overly loud so I’m pretty sure the fan’s throttled way back. 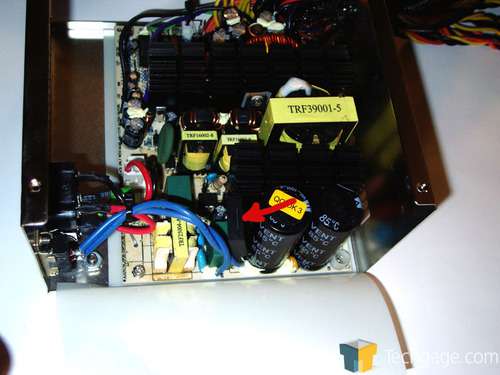 I just wanted to point this out, see the rectifier that the red arrow is pointing to? Yep, it has no cooling whatsoever. I think that this little omission will come back to haunt Spire in the future. Not that I saw it fail but I’m sure that over time it will lead to problems.

Enough looking at the Rocketeer IV, let’s throw this shrimp on the barbie and see if she cooks.

The results are a mixed bag at best just going by the voltages. The 12V rails dipped to borderline ATX spec (11.40 for 5%) under full load and the 3.3V got very close to the limit of the spec as well. The 5V stayed further above spec than either of the the other three but it still dropped .14V through the course of the load tests.

Now, what you aren’t seeing here and won’t see in the ripple results is the very poor voltage stability. The rails fluctuated by hundredths of volts at a slow enough rate to not show up as ripple but fast enough to result in bouncing voltages. The voltages I’ve listed are an average of the highest and the lowest voltages I saw during tests four and five.

During tests 1-3 the voltages looked pretty stable. Now, the fan never got loud during the tests but I think a bit more voltage to the fan wouldn’t be a bad thing as I started smelling the odor of cooking electronics at tests four and five. During test five the unit was pulling so much juice from the wall (800W) that it coupled with a window mount AC unit actually tripped a breaker. The RocketeerIV did restart and finish the test after I reset the breaker so that is to it’s credit. Although I’m not willing to place bets on how much longer it would have survived under full load.

Surprisingly the Rocketeer IV does fairly well on ripple with the 12V rails reaching about 65mV on test 5 and the 5V rail hitting about 47mV. The 3.3V rail stayed the cleanest at a mere 37mV at test 5 so all the rails were under the ATX spec of 50mV for the 3.3V and 5V rails and 120mV for the 12V rails. Truly remarkable considering the lack of filtering on the AC side. Still, the stability of the rails is enough to negate the good ripple results because even if the rails are fairly clean the voltages have more wobble than a drunk on a bicycle.

The Spire Rocketeer is basically an also ran. It’s got the goods to be called a 450W PSU but by no means is it a reliable 600W unit. It’s better than bundled PSU’s but that’s about it, it’s not really worth consideration for a serious gaming PC. When I add up the lackluster performance, the basic appearance and lack of sleeving I’d be hard pressed to recommend this PSU to anyone under any circumstances. That said I’m awarding the Spire Rocketeer IV SP-ATX-600W a 4/10 and relegating it to the "only in times of dire need" category. It’s simply a "it’ll work until you get something better" PSU.