Want a high-performance wireless gaming mouse that doesn’t have its battery-life measured in seconds? Well, SteelSeries has released its renowned Sensei into the wild, free to run and frolic in grassy meadows, without the need of being tethered to unsightly cables. Does the result live up to our high expectations? There’s only one way to find out.

Remember that uninspiring beige mouse that required the ball and rollers to be cleaned every so often? What about the first few generations of wireless mice that chewed through batteries so fast it completely offset any practicality that they may have had?

Yessir, things have certainly improved since then, and it doesn’t look like it’s going to change any time soon, thanks to companies like SteelSeries who has recently released the latest iteration of the popular Sensei high-performance gaming mouse, the Sensei Wireless.

In our review today, we’ll see if the peripherals giant has managed to create an updated product that is truly worthy of being called master, so let’s get to it.

The Sensei Wireless features a high CPI laser sensor, a 1ms response rate/1000mhz polling rate, up to 20 hours of battery life, and programmable buttons. All of this has been wrapped up in the tried and true, ambidextrous Sensei body shape, and coated in a soft touch material. It features a charging base, but also the ability to be charged directly as a wired mouse. 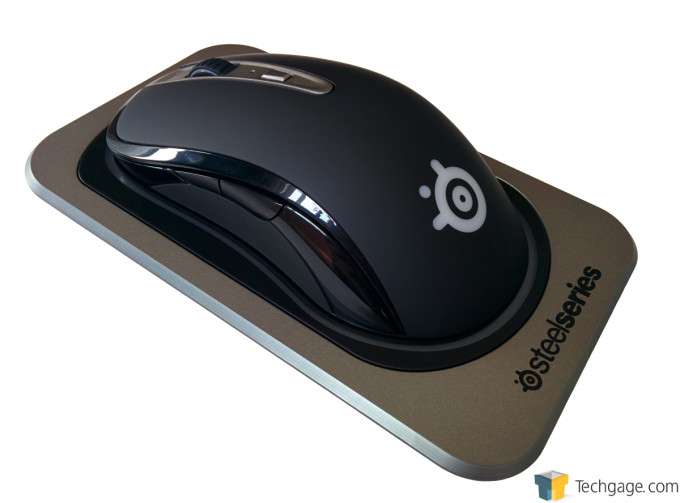 Running down the middle is a metal-like accent that holds the non-tilt, illuminated scroll wheel and CPI selector for on-the-flyÂ switching between two profiles. Between these is a small red LED that flashes when the mouse charge gets low, and remains solid while the mouse is charging. At the very front of the mouse is the mini-USB connection that allows the Sensei to quickly go from wireless to wired. 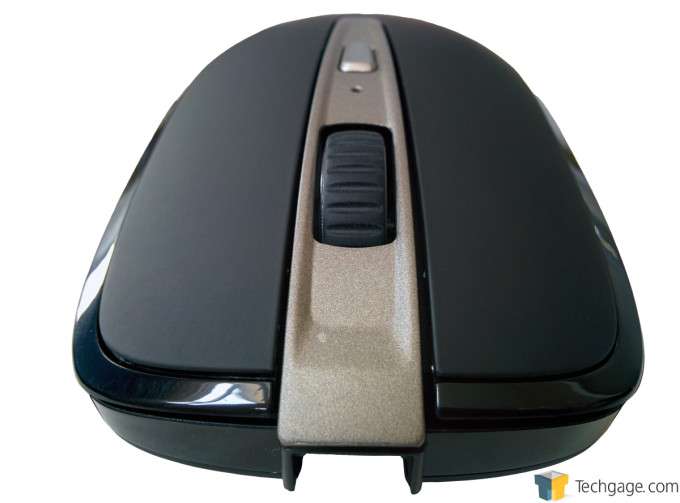 The body of the Sensei isn’t particularly tall or wide, which makes it more of a jack of all trades mouse that doesn’t place a lot of emphasis on the grip style that’s used. This middle of the road design means the two buttons on each side are easily accessible. 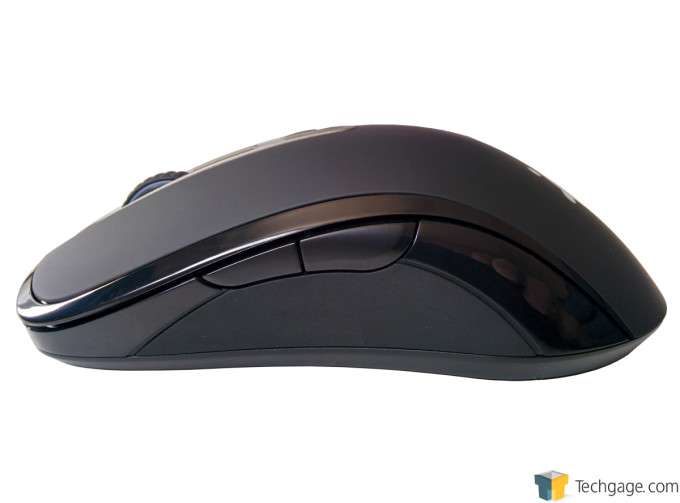 Towards the rear of the mouse is the illuminated SteelSeries logo that can be set to one of any 16.8 million colors, along with the scroll wheel. There’s also a sensor that detects when a hand is on the mouse, at which point this illumination is turned off to conserve the battery. 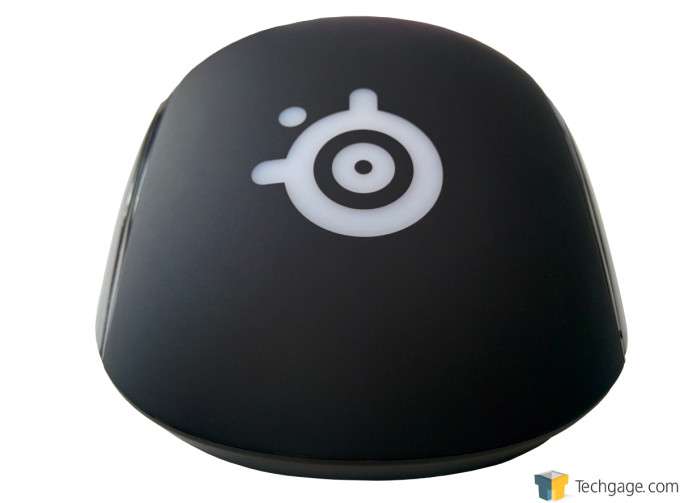 The belly of the mouse shows the Pixart ADNS-9800 laser sensor, which is capable of tracking up to 8200 CPI, and is surrounded by four Teflon feet. To the right is the on/off switch, and the connection button that makes the mouse play nice with the base if needed. There are also three small metal contact pads that are used when charging the mouse on the base. 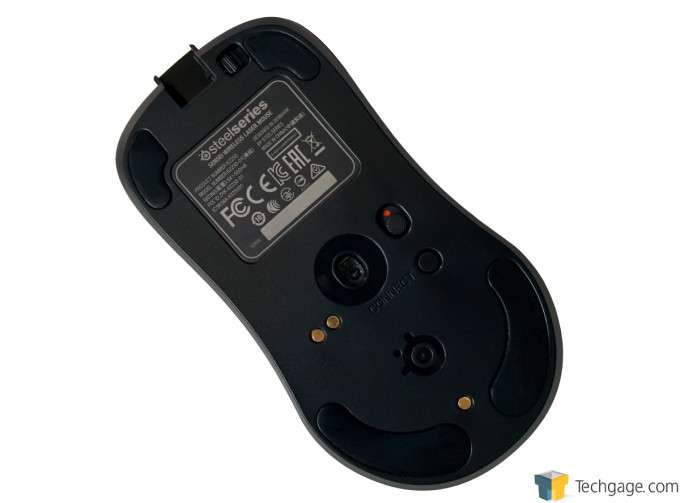 Switching over to the base itself, which doubles as the sensor that reads the mouse input, we see a bead blasted, solid aluminum top plate. The charging area features an illuminated ring that changes from green, to yellow, to red in order to indicate the current state of the battery. This illumination along with the rest can be changed through the software. 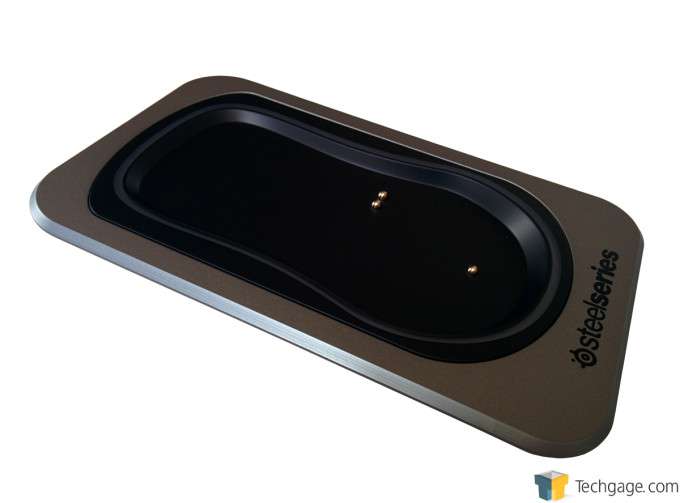 At the front of the base is the port where the cable can be disconnected if the mouse needs to be charged directly while in use. Finally, to protect whatever surface it’s sitting on, the majority of the underside has been covered by a foam pad that surrounds another connection button. 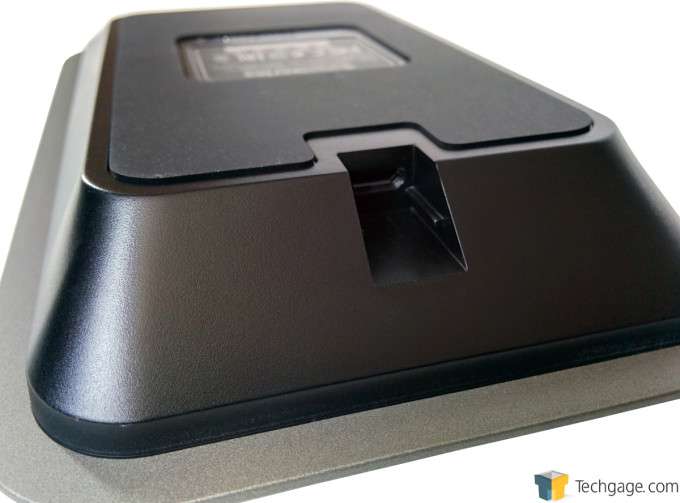 Included with the Sensei Wireless is the manual, a quick reference sheet that shows how to safely disconnect the cable from the mouse, the USB cable itself, and a SteelSeries sticker. 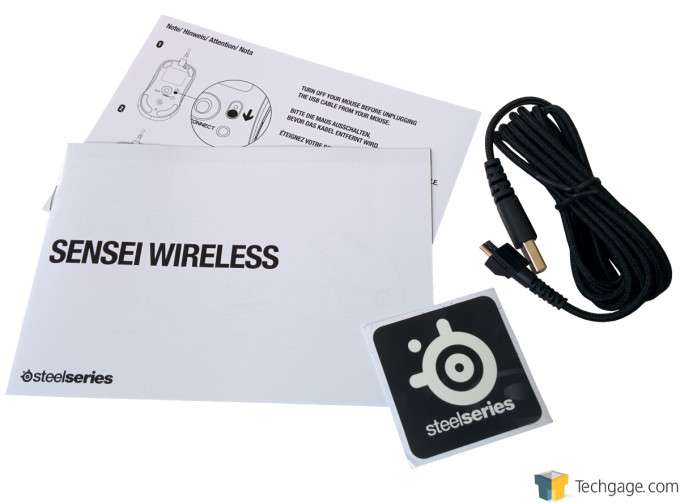 While the mouse will work out of the box, next we take a look at SteelSeries’ Engine 3 software in order to get the most out of the newest Sensei.

A Tour of the Software

On the left of the SteelSeries Engine 3 UI sits the various buttons that can be programmed, a macro editor, and a Config button that allows access to any custom profiles. In the middle is where a left, top, and right view can be checked, as well as where the illumination for the mouse and base can be changed. The section on the right is where the more intricate settings can be modified such as the two CPI profiles, the power settings, and the lift distance, just to name a few. 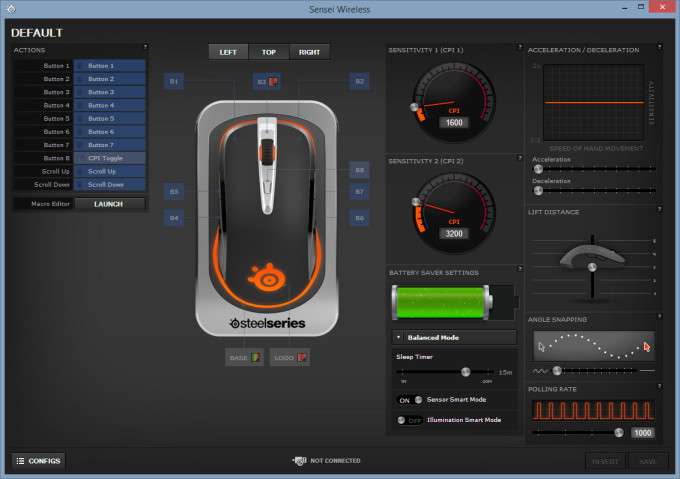 Pulling up the macro editor gives a visual representation of exactly what is going on as the macro is recorded. It shows the ‘button down’ and ‘button up’ actions separately, as well as the time between, and allows users to fine tune each action manually. 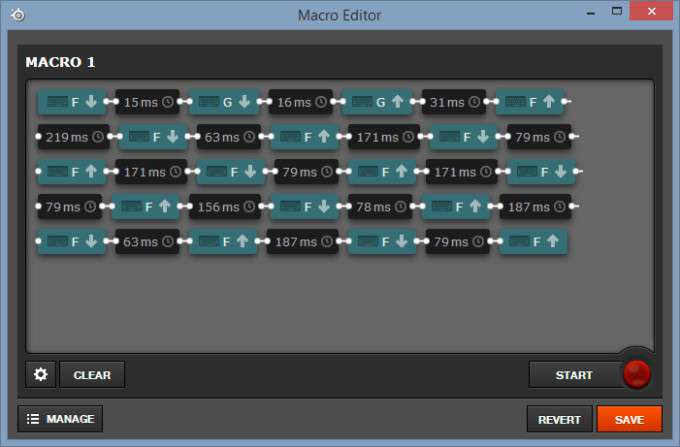 If the default orange illumination and the battery indicator just won’t do, simply click on either the B3, Base, or Logo icons on the mouse diagram to bring up the color picker. All illuminated areas can also be set to steady, breathing, or disabled completely. One point to note is if the color of the illumination on the base is changed, it will no longer show the state of the battery, so the small LED just behind the scroll wheel on the mouse will be the only indicator. 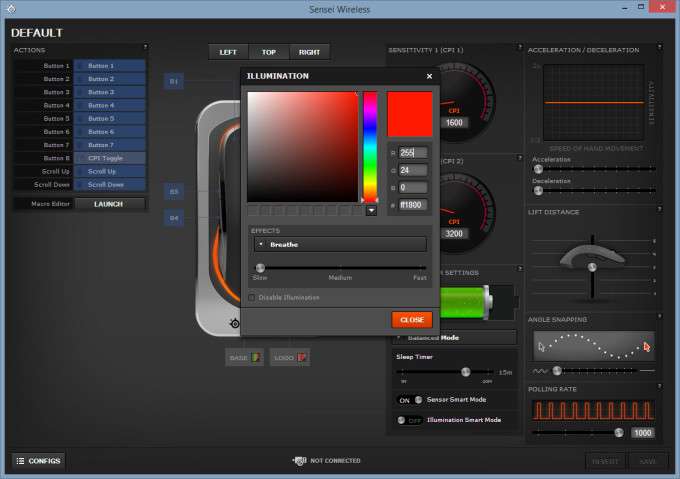 Chances are the CPI settings are self-explanatory for those in the market for a high-end mouse such as this, so we’ll move onto the Battery Saver Settings. Users can choose between the more battery intensive High Performance Mode, or the Power Saver Mode that extends the life of the battery up to 20 hours. There’s also the middle of the road Balanced Mode, or a Custom Mode that allows users to manually set the sleep timer, sensor, and illumination options. 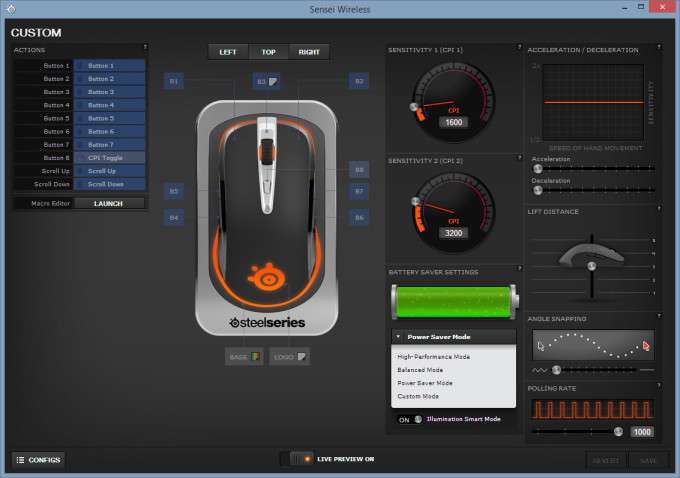 We won’t dig too deeply into the other settings such as acceleration and angle snapping, seeing how some may never even touch them, and those who do will want to fine tune them for themselves. What we did want to mention is that if any of the options are unclear, SteelSeries has provided a small ‘?’ box that pulls up a detailed explanation of each one. Another cool feature of the Engine 3 software that deserves some spotlight is support for uploading unlimited custom profiles to the Cloud for use at any time. 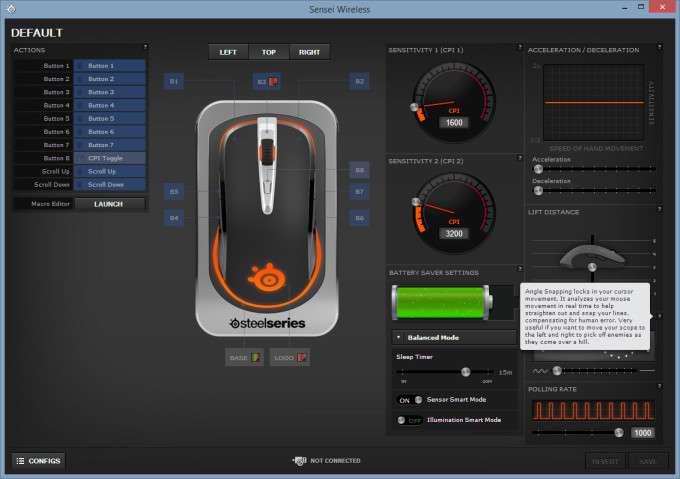 Now we’re ready to unleash the Sensei Wireless and see how it performs during some day to day use, which will include general web surfing, gaming, and possibly writing a review. See Rob? I’m not just playing games. I really am working!

Of course the first thing that a user will notice is how a new mouse feels in their hand. Unfortunately, this is purely subjective and what one person finds comfortable, another might find impossible to use. In my case, the Sensei Wireless fit like a glove for me, and this is coming from someone who has used a right handed mouse exclusively for over 4 years.

Each button was easily accessible, and I suspect that those with smaller hands shouldn’t have too much trouble either, thanks to the somewhat low and narrow profile of the mouse.

The left and right mouse buttons are solid, and have a nice, tactile feel to them. When it comes to the shoulder buttons, they’re a bit spongy, and seem to travel a fair distance before they register. This isn’t a make or break problem for me personally, but it would have been nice if these buttons felt as solid as the rest.

The scroll wheel features a bit of notched resistance, but for the most part remains nice and smooth. While clicking, the scroll wheel feels very similar to the left and right mouse buttons.

When it comes to performance, I noticed absolutely no lag or latency with the Sensei Wireless. It performed exactly the same whether it was wired, or left to run free. I’m sure we could have tracked down some sort of testing software, but I feel confident in saying that if there is any latency when running as a wireless mouse, there isn’t any real world impact.

There have also been mumblings around various forums due to acceleration problems with the ADNS-9800 sensor, but I didn’t observe any of thatÂ during my two weeks of testing. The pointer continued to track perfectly and move as expected, so instead of the sensor being the culprit, I’d imagine fault would lie with the firmware and internals of the individual mouse. 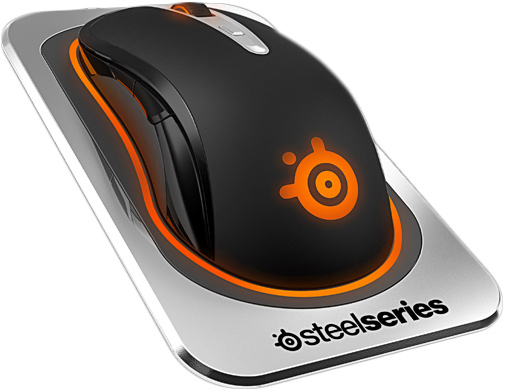 Battery life is also a prime concern when it comes to wireless peripherals, and we’re happy to report that the 20 hours quoted by SteelSeries wasn’t far off from what we found. From a full charge we managed to get just over 19 and a half hours when running in Power Saver Mode. Some might think 19-20 hours isn’t enough, but most of us aren’t likely to put in a solid 20 hours of use. The worst that could happen would be to forget to put the mouse on the charging base, in which case simply plug in the cable and use it as a wired mouse for a few of hours until it’s fully charged.

To wrap things up, SteelSeries has managed to carry over everything that made the original Sensei popular. The overall build quality of the mouse and the charging base is fantastic, the software is intuitive and easy to use, and the battery life is what I would consider excellent.

The biggest sticking point is likely to be the price tag, but in this case you certainly get what you pay for. At $159 US, it’s more of an investment in a solid, built to last product with well-designed software, rather than just something that will control your pointer.

As the name suggests, the biggest advantage here is the ability to have a high-end gaming mouse with the ability to be wire-free, which in my opinion is as liberating as cooking bacon without wearing pants.

Oh, the freedom. Does anybody else feel a draft?