The Internet Stratification: Tales of an Unequal Web

Think that the Web is equal for all? Not quite. While countries with great access to the Internet move towards creating content-heavy websites and services that require ever faster connections, there exists even more countries that would simply like a stable and reliable Internet connection to begin with. Read on to explore this digital divide.

Some months ago Blizzard announced — and dispelled any doubts — that its upcoming Diablo III would require a constant connection to the Internet, even in single player mode. Angry voices were immediately heard (including my own). Those were met with complete silence from Blizzard, or dismissive shrugs by the player community that sees nothing wrong on this move. It seems we have moved to an age were constant and reliable Internet access is accepted as natural and ubiquitous.

Or is it that we are spoiled by our western culture and its decades-old investment in connectivity infrastructures? We just don’t experience the Internet as a constant source of connectivity problems or bandwidth limitations anymore; and as such we forgot how unreliable the Internet really is and how limiting it can be for anyone wanting to tap into the amazing wealth of information and services available today.

During this periplus I’m undertaking around Angola, I’ve been seeing the “other Internet”. The World Wide Web of strongly limited bandwidth, high costs, and unreliable connections. The Internet our western countries have forgotten, but that is still a reality around the world. In fact, that affects the vast majority of the world population and, here’s the shocker, that also affects developed countries.

The Internet was founded on good principles of democratic access to information. And for a while it seemed this would be the case. When all we got was a dialup modem, the world pretty much played the same tune. In fact, I was here in Angola also in 1996, at the time doing some work for the Ministry of Finance. I could connect to the Internet from Luanda through a dialup connection and experience the World Wide Web or the Usenet just like someone in New York, London or Tokyo. In Africa, I was a 1st rate Internet citizen. Everyone was.

It’s true some remote locations couldn’t connect as easily. Anywhere not blessed with a phone line would have to go by without Internet access or pay premium prices for data rates and expensive satellite equipment. But as soon as a phone lines got extended into a remote location, the Internet was a modem away. I’ve seen this happen on some provinces here in Angola, as well as in my own home continent, Europe.

But technology is a racing car in constant acceleration. Not 20 years later and we have ADSL, Cable, Fiber and high bandwidth connections. We can transfer data faster than our hard drives can read it and the World Wide Web itself has become the largest library on the planet; an essential repository of information and an invaluable communication resource, both for business, education and leisure. Not just that, but it also became an immense market of commodities and services. The world Wide Web is the first example in Human history of a Global Culture.

Is this wrong? No, if you are privileged to have been born or live in a western country. But a major headache if you are not. You see, the fast-paced evolution of the Internet couldn’t possibly be met with the require infrastructure on countries where other concerns take precedence. Today, these democratic principles have been forgotten. If not 10 years ago I was still being instructed to optimize bandwidth usage when developing websites, today that basic principle is all but entirely forgotten. You can still see the warnings when using profiling software, but everyone ignores them… or doesn’t care anymore about profiling their websites.

Today the Internet mimics our societies. It’s a class-based service. There’s the haves and the haves not. The large bandwidth requirements for many of the services – even for simple access to basic information – has been creating a gap between those that can benefit from them and those who can’t or have trouble doing it. We haven’t reduced the divide, we have extended it. And yet you go to a mall in Luanda and you can see the latest MMORPGs on sale, you can see important businesses with their demanding bandwidth and stability requirements, you can see a population that uses the Internet and that requires it, just like anyone in North America or Europe.

Luanda, the capital of Angola, as well as a few other important cities, do offer high bandwidth services. You have ADSL, you have Cable and soon enough you’ll have Fiber. But only the privileged can use it. It’s not just that these are expensive services. It’s that their coverage is geographically limited to city centers and small pocket locations. Suburban areas aren’t usually covered. Many suburban areas in fact lack even basic sanitation facilities and electricity. But people still live there, more in fact than those who live in the city proper. You can find living in a Museke (The generic name given to Luanda’s suburban quarters), teachers, students, judges, policeman, white and blue-collar workers and even business owners. You also find businesses and public services.

These are all people and institutions for whom the Internet is known and required. And yet, the best access they can have (if they can’t pay for a dish to have remote access to Cable services) is dialup speeds, through a GPRS USB Pen, and a monthly 200 MB connection. A connection, I must add, that is constantly failing, often for as much as a full 48 hours period. Even that cable dish isn’t reliable, experiencing often the same connectivity issues.

This isn’t a backwards country. This is a real country, modern in many ways and definitely an avid consumer of western culture, which experienced nearly 30 years of civil war after its independence from colonial rule and that today faces the pressure of a lack of infrastructures that can cater to its population needs and the unforgiven push of technology. Blizzard won’t be selling many Diablo III copies here.

But many other things won’t happen here either. Simple access to Google emails can often take 3 minutes to complete even on basic HTML mode. And don’t think about sending inline pictures on your emails. Google mail doesn’t have an option to disable autosaving, so at 45 Kbps download and 35 Kbps upload speed (that’s bits alright, not a typo), after a couple of 400 Kb images, it will become impossible to do anything. Instead, send them as an attachment and prey you can actually upload it at that speed… you’ll need several tries, trust me.

Now imagine that on today’s World Wide Web. How do you think am I supposed to experience Amazon, a game website, eBay, many news websites? Imagine modern multiplayer games and single player games that require a constant access Internet? Imagine digital distribution services like Steam and imagine yourself downloading a 4 GB game on a 45 Kbit/s unstable connection. Imagine yourself using torrents, playing around in HTML5 websites, making use of Web applications on a 200 MB limited monthly transfer rate. In short, imagine yourself making regular use of the available Internet services in 2012.

It’s no wonder that maps showing global Internet usage appear nearly empty on continents like Africa and on vast expanses of Asia and South America. It’s a “simple” exercise to start a new Web service and count the countries that access it and realize that Africans won’t be many. Below is Web traffic map of the Akamai content delivery system that powers, among others, Web services from the likes of Facebook, Twitter, Amazon, Netflix, Yahoo, Microsoft and Apple. 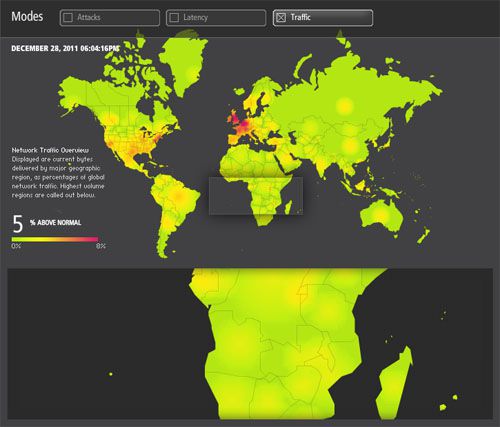 The unstoppable motion of technology advancements is a natural and desirable aspect of our societies. But it has its dark side. It invariably widens the gap between the poor and the rich, or the developed and undeveloped countries. With that, an Internet for everyone is no longer a dream. It is a fable.

We can hope for better days, but hardly they will come. It is already quite evident today that user demands and business requirements put more pressure on technological advancements than that which can be followed by countries lacking infrastructures or in the process of building those infrastructures. The vast majority of the world population simply doesn’t have any kind of physical access to the Internet or has a very limited access (limited both by speed and monthly transfer rates).

Even the simple process of developing a Web service is today almost entirely done with high bandwidth requirements in mind. No one develops websites thinking on 45 Kbps connection speeds. Even less do it thinking on 200 MB monthly rates. We can try to understand Blizzard’s business strategy and decisions, or Google’s unavoidable autosave feature. They make sense in a world of high bandwidth and stable connections. But the reality is that they make the Internet harder to use for the rest of the world.

A world where the Internet serves only the interests and capabilities of the western brethren and cares not anymore for its initial ideals. Can I blame anyone? Certainly not. It’s how things are. But let’s not pretend anymore the Internet is this cool place where everyone is the same. That’s the marketing blurb of our modern societies, oblivious of the real impact of the Internet outside the little bubble they live in.

We have today an Internet that lost its democratic principles, as its evolution and technological advancements introduced a class-based Internet where bandwidth reigns as a rutheless dictator over access and distribution of information.