When you look at your PC you look at the skin first and then consider what’s underneath. How many times have you seen an awesome PC at a LAN party and spent 10 minutes gawking at the case before even trying to figure out what mobo and video card the guy’s running in it? If you’re like me it’s quite a few.

A good case can make you happy with your PC even if you’re running a P3-500 and GeForce 2 (Ok, maybe not but you’ll at least feel good before you turn the PC on) and a really good case makes things such as cable management simple. Case in point, the Ultra Aluminus I reviewed back in February. Nice case, good looks and excellent wiring options. I’ve had other cases that were just lousy for hiding wiring. The Antec 1040B was one that wasn’t so wiring friendly due to the drive cage layout. 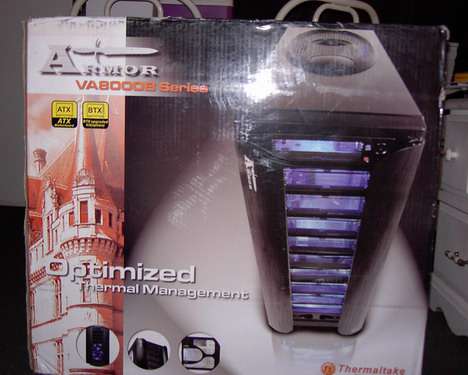 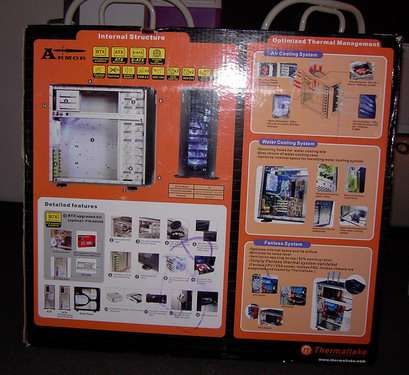 This brings us to the next willing victim, err, product up for review ad that’s the Thermaltake Armor-VA8000BWS. The Armor is built on the same chassis as the Kandalf and features 11 front bays that can be pretty much setup any way you choose. You have 1 bay that has to be a 3.5" bay adaptor but that’s because it has the power & reset buttons plus the power LED and HDD LED. Inside the box we find the case wrapped in a cloth-like wrapping with fitted Styrofoam end caps. I’d really like to see closed cell foam used rather than Styrofoam since it’s green friendly and it’s more durable so if you end up needing to use the end caps more than a couple of times they won’t fall apart. 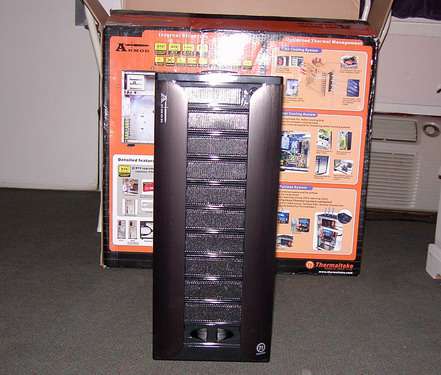 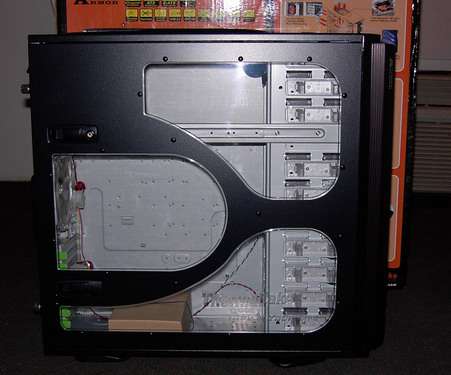 The Armor is available in 2 colors, black and silver and your choice in color dictates your material. Black cases are steel and silver are aluminum and as far as I can tell the black case is also available without a window for those of you that think that the only good case window is one that comes to life under the blade of your tools. I think that Thermaltake’s decision to not include a non-windowed side for the aluminum case is a mistake since aluminum is so much easier to work with and is pretty popular for modders.

The design of the window is one of those that you either like it because it’s different or you hate it because it’s too different. Myself I like it but I wish that it didn’t go quite so far forward, I really dislike showing the ugly drive frames in a window which is why the window I put in my case is just 10"X10". 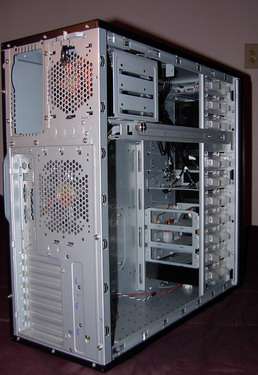 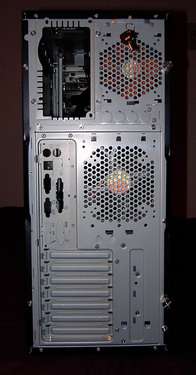 The inside of the case is built with strictly a 5.25" bay that runs from floor to roof. All the 3.5" drives in the front of the case are in bay adaptors. The button/LED carriage will hold either a HDD or floppy, there’s another single 3.5" adaptor that also does that trick that as such, like the button/LED carriage, is not fan cooled. Besides those there is also a 3 in 3 (3 X 3.5" drives in 3 X 5.25" bays) that features a 120mm LED fan which will keep those hot sweaty drives spinning coolly. There’s also a 3 X 3.5" drive (HDD only) that goes in the rear of the case beside the upturned PSU. I personally love this concept in that it’s making use of previously wasted space. The gondola is fan cooled by a 92mm fan directly behind it which pulls air through the drives mounted there. 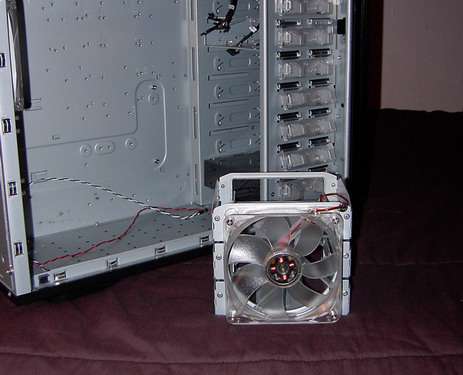 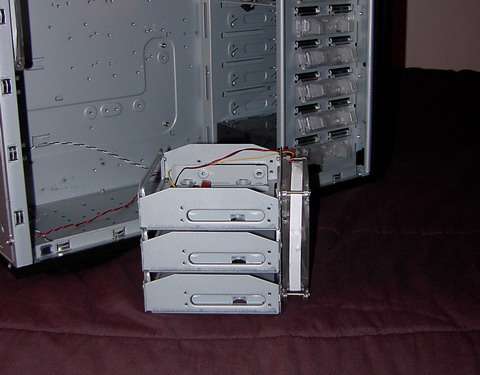 There is a downside to the arrangement though. If you have a PSU with a single bottom mounted fan the fan will end up being millimeters from the drive gondola which effectively blocks airflow for the PSU. I feel that Thermaltake would have been wise to allow the backplane that the PSU mounts to flip 180° so that should you run up against that you could flip the PSU over towards the off side of the case where there’s about an inch of clearance. While an inch isn’t optimal for massive airflow most PSUs don’t flow more than 30-40 CFM during normal operation so it shouldn’t be too much of an obstruction. 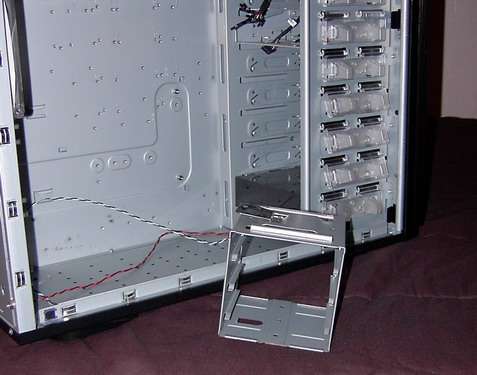 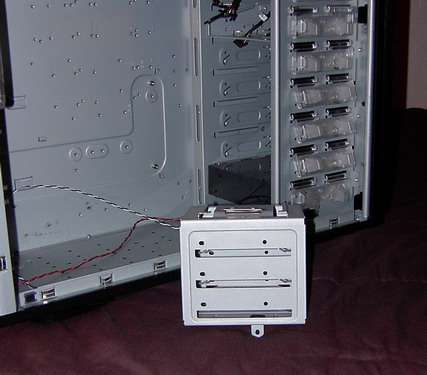 Inside the case you find the accessory box and inside it is the blowhole fan and the screw pack along with the instructions and a polishing cloth that feels a lot like a lens cloth. Considering that this case uses a fairly soft and easily scratched molded acrylic window and doesn’t have a high gloss finish I’ll assume the cloth is for the side window and not the case body but as it is not in the instructions at all I can’t say for certain. 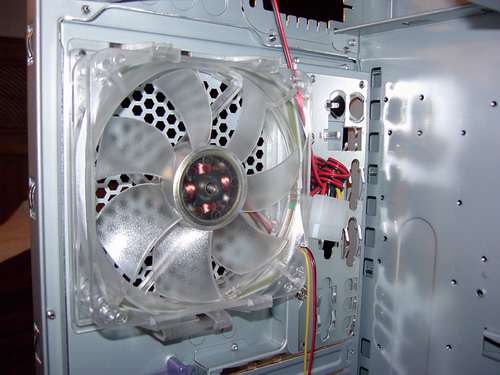 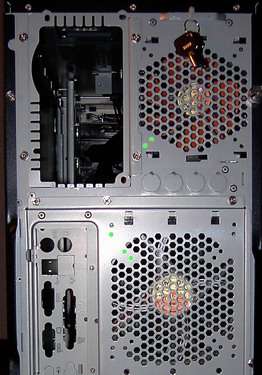 The rear of the case features a punched honeycomb grill for both the 120mm case fan and 92mm gondola fan. Happily you are not stuck with the fan clips and the stock sized fan. The honeycomb is stamped with fan mounting holes for 80mm, 92mm (And that’s it for the gondola fan) and 120mm fan screw holes so if you’re looking to go with a smaller fan for some reason it’s simply a case of snapping out the bracket and screwing it down. Also if you’ve got one of those fan vibration isolator kits you can use it and ditch the snap in mount. Very thoughtful! 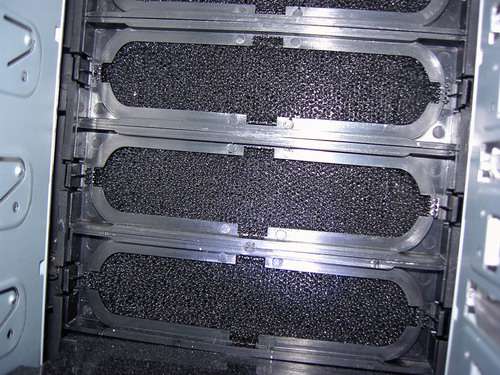 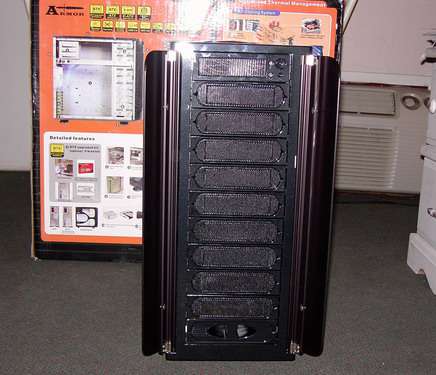 To allow for great cooling the front of the case features perforated bay covers that are all filtered. This means that as long as you’re pushing equal or greater air into the case as you’re pulling out you will have filtered air in the case with less dust buildup. The material used is open cell foam that offers a good balance of airflow to restriction which means you’ll get decent filtering without losing a lot of airflow to the case. 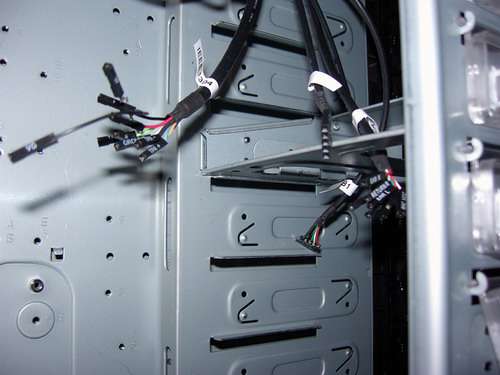 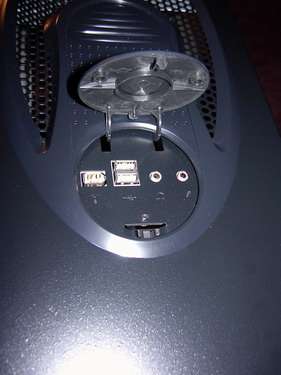 The Armor also features top mounted Firewire, USB and audio ports and they’re long enough to easily reach the headers at the bottom of the case but they’re not long enough to hide beside the 5.25" bays. If you noticed in the rear quartering shot I took the mobo tray meets the side of the 5.25" bays with narrow slots for thinner wires to pass through. The power, reset and LED wires are long enough to go through that area but the front audio, USB and Firewire cables aren’t which means you have to either have them hang out in the case looking pretty sickly or route them down the mobo under any cards along the way. I think that’s a bit short sighted on Thermaltake’s part. 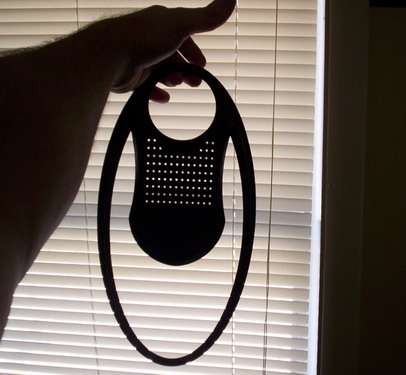 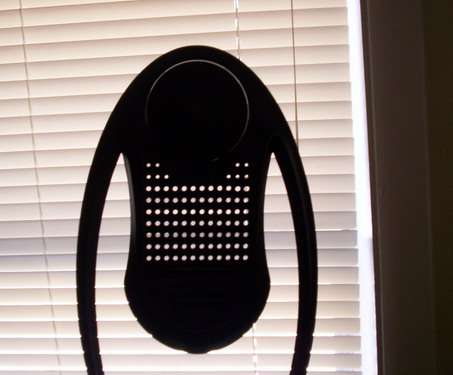 Also the holes in the top mounted blowhole trim are really small and restrictive. I ended up drilling the holes out with a 1/8" drill bit to open up the holes to nearly double their original size. This made a decent improvement to airflow through bezel as I was able to note by the drop in air being deflected through the fan. This is something that really needs to be addressed by Thermaltake to make the blowhole more than decoration.

As I’ve noted before the slots to pass cables through are fairly small so IDE cables are a no go. You can pass loooooong SATA cables through there though but you need 24" for use with the upper drive gondola. And now for how the case looks with a full system in there I didn’t include buildup pics because I’d be giving away another review and I can’t do that, stay tuned for more pics though. 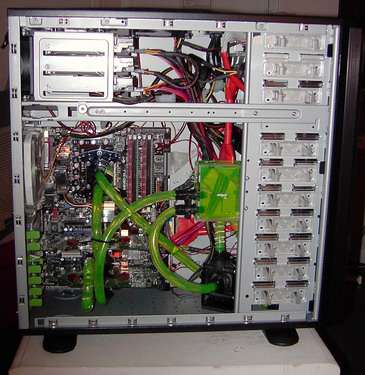 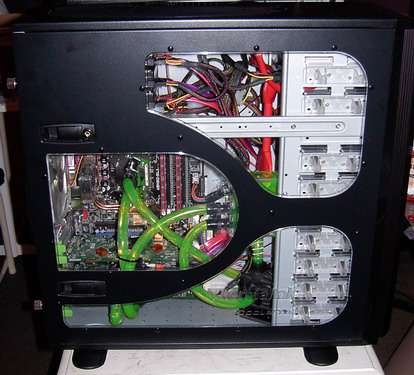 As you can see the Armor has plenty of room to allow for quite a setup to be placed in it. The system in question consists of an ASUS A8N32SLI-Deluxe, 2 X BFG GeForce 7800GTX 256’s, X2 4800+, 2 X 74 gig raptors, 400 gig Western Digital 16mb buffer SATA HDD, 2 X LG DVDRW drives, Swiftech H20-Apex Ultra water cooling kit and XG Duro 900 PSU. The radiator for the water cooling kit is standing vertically in the front of the case with the pump behind it and even with the radiator taking up 6 of the 11 front drive bays there are still 5 free for optical drives, fan controllers, the button/LED bay and or another HDD. The Armor really lends itself to water cooling. It even features knockouts in the rear to use an externally mounted radiator. 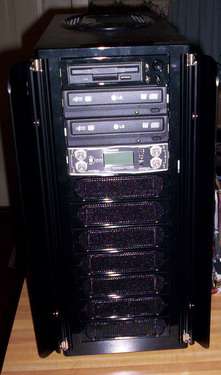 The verdict: The Armor in steel is insanely heavy. We’re talking close to 40 pounds here. A built system in this case tips the scales at close to 70 pounds. In my opinion this case really needs to be available in aluminum only but I’m biased, I have a bad back so picking up and toting around a 70 pound PC is a no-no. The ability to hide wires is hampered by the full 5.25" bay design but the flexibility is enhanced by it so it balances out there. The mostly decorative blowhole is a minus as is the lack of options on the PSU positioning. There is the lack of a removable motherboard tray but due to the huge size of the case (It’s even EATX capable) dropping in an ATX mobo is no problem, even with the water cooling kit installed so that balances out.

I’d like to give my thanks to Vince for loaning me the system I installed in this case. Someday I’ll have the good stuff but I don’t have $5000 to lay out at the present time.