It’s hard to believe 802.11g wireless has been around for 5 years now. That’s a lifetime in the PC industry but still, the wireless spec that we have comes to know and love is alive and well. Even today, with the emergence of a newer protocol 11n, little has been until recently to slow down sales of the tried and true 54 Mbps.

Over the last year however, Draft N as saturated homes across the globe, bringing with it a promise of increased bandwidth and further range. Sadly, it seems that this protocol can’t seem to break the draft status and become gain the standardization that it lacks. However, regardless of the protocol’s status, companies have been coming out with more and more hardware that works on the latest addition to the wireless scene.

Today we are working with the TRENDnet’s TEW-631BRP. Started 1990, TRENDnet has been delivering networking solutions to home, small and medium sized business worldwide. Offering over 250 products in over 125 different countries, TRENDnet’s popularity in the US has been steadily growing over the past few years so when they contacted us to see if we were interested in working with their latest lineup of routers, we couldn’t resist. Sending us over the TRENDnet’s TEW-631BRP, they also included the TEW-621PC PCMCIA wireless card to round out the TRENDnet home network experience.

When we looked at the D-Link DIR-655, Draft N was entering its current variant, version 2.0. By releasing v2.0 compliant hardware, companies reduced a lot of the consumer fears of purchasing a router that might not even be relevant when N became a standard. Not ones to fall behind, TRENDnet designed the TEW-631BRP to use the v2.0 protocol, putting it on par spec wise with most other Draft N routers available today.

The pair of products on our bench today, the TEW-631BRP and the TEW-621PC, comes packaged in similar boxes filled with virtually everything needed to get your home network up and going. As with any box art, there is various information about the products such as system specs and performance claims. 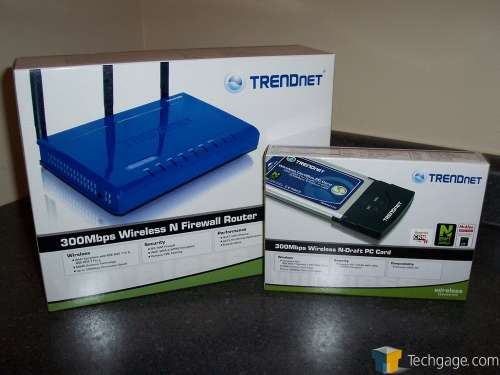 The back of the packages both share the same home networked diagram showing just how useful a wireless network can be, especially with the newer Draft N. This information is repeated multiple times in several different languages as TRENDnet is currently far more popular overseas than they are here in the states and because of this, distributes their products across the globe. 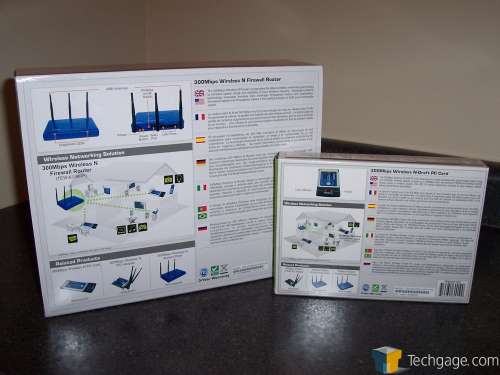 Shipping with the TEW-631BRP is a setup CD, a short and simple manual with basic information about the device, a power cord and a single six foot CAT5 cable. Nothing that is going to set off any amazing alarms but just enough to get you started with you unpack your own router. 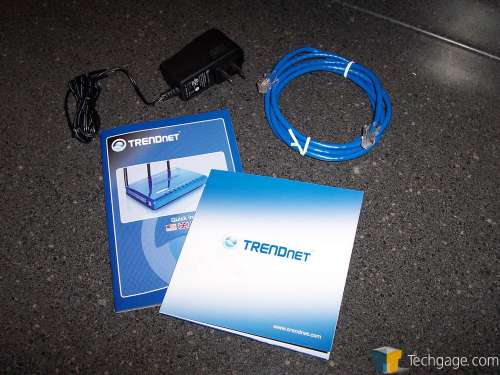 Getting to the TEW-631BRP itself, the first thing we noticed was just how ordinary the router is, a simple blue plastic casing with three antennas on the back. Weighing next to nothing (less than a pound), the TEW-631BRP is a slim router that should be able to be tucked almost anywhere you need it to go.

Running all along the front of the TEW-631BRP are 9 lights indicating everything from power to the wired LAN ports, WAN activity and WLAN activity. On the top in the middle of the router is the TRENDnet name stamped into the casing itself and in the upper right hand side, the model number is printed. There is also a jewel sticker just about the power light that simply says “Wireless Router” that lights up when the TEW-631BRP is in use. 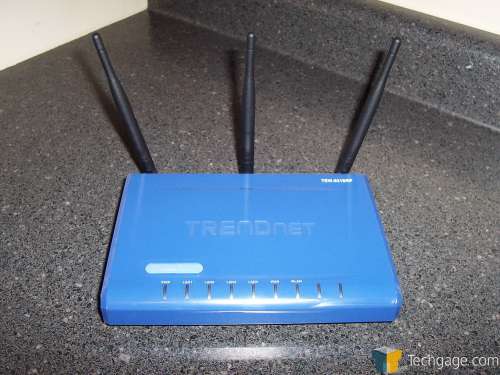 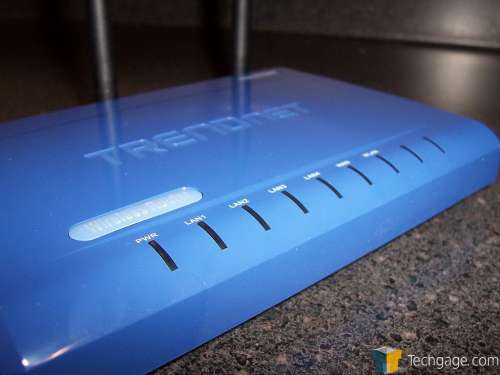 Moving around to the business end of the router lined up from left to right and in between the three antennas, are a power jack, a recessed hard reset button, a WLAN on/off switch, a WAN port that is intended to connect to your cable or DSL modem, and four 10/100 ports that are a horrific yellow color. The most interesting thing out of all of these pieces is the on/off switch. With the price of this router hovering anywhere between 60 and 70 dollars, the TEW-631BRP could easily be picked up with a wired network in mind and with wireless to follow later on.

The addition of this switch makes those using this initially as a wired router even safer as the TEW-631BRP suddenly is closed off to any wireless clients that might be hovering around your apartment or home. Nothing ground breaking and many routers allow you to switch off the wireless capabilities through the web interface but a nice addition none the less. 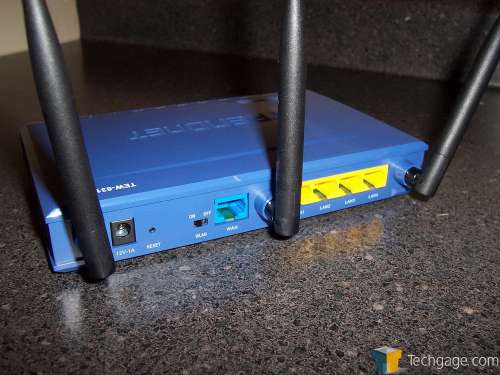 Turning our attention to the TEW-621PC, one can instantly appreciate the thinness of the PCMCIA card. The edge of the card that will stick out of the PC is almost as thin as the rest of the case that fits into the notebook itself. There is a pair of LED lights on the card that indicate power and wireless network activity.

Shipping with the TEW-621PC, like the TEW-631BRP is a manual and a setup disk with a manual in .pdf form, device driver, wireless utility and a version of Adobe Acrobat for giggles. Like its router brethren, the package isn’t anything spectacular but exactly what we need to get going. 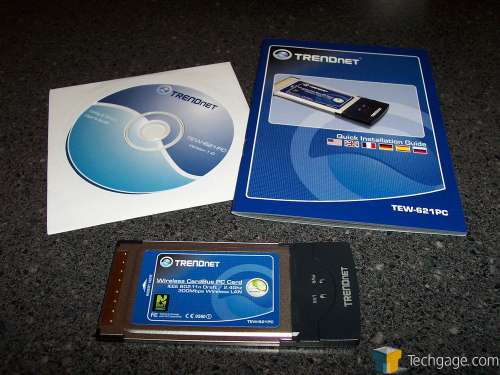 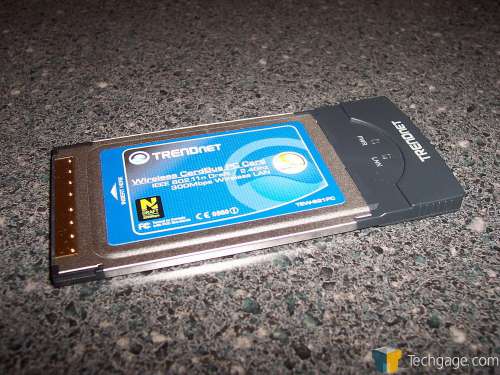 With the look out of the way, let’s move onto setup and checking out our available options.

Once connected, we installed the wireless utility found on the setup disk with the TEW-621PC. This simple program polls the area for wireless networks and allows you to connect to which ever network you see fit. The first tab is the “Link Information” page. This gives you information about your current connection including encryption methods, connection speed and IP information. 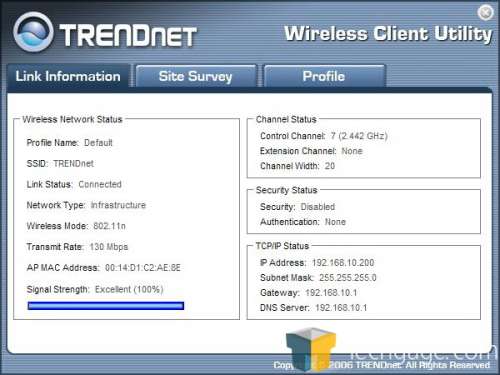 The second tab is the “Site Survey” tab. This allows you to scan your area for any available wireless networks as well as the connection strength and protocol type. As you see here, the TEW-621PC picked up on a pair of networks found in our test area and reported back the signal strength and security mode. 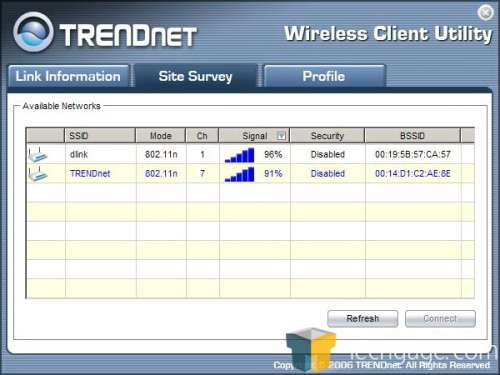 The final page is the “profile” page. This gives up information about the individual profiles. 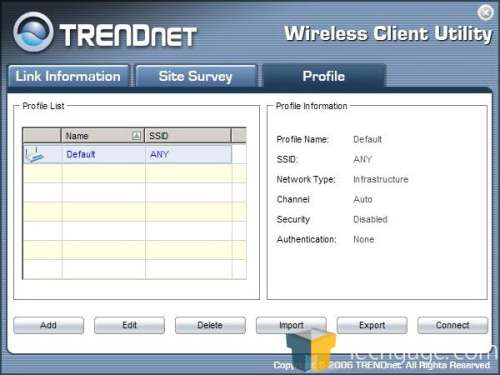 Once we picked our wireless network, we got connected and signed into the router using its default 192.168.10.1. Very simple and very easy. As with all routers, the manufacturer has chosen their own default administration and in this case, it’s a simply admin/blank. 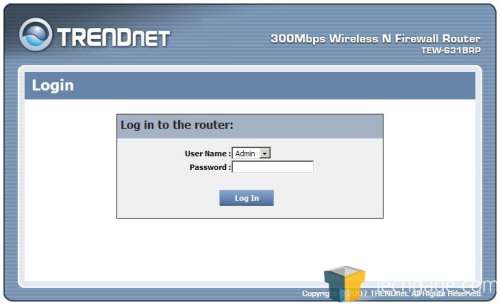 Once in, there are menus with a very similar feature set to that of the D-Link DIR-655 that we looked at last year. The first page is full of basic information that will walk you through a setup of an internet connection, wireless network and view your network settings. In the advanced tab, we get into far more interested features that include the ability to set your own routing tables, content control through simple IP banning, gaming QoS and many more. 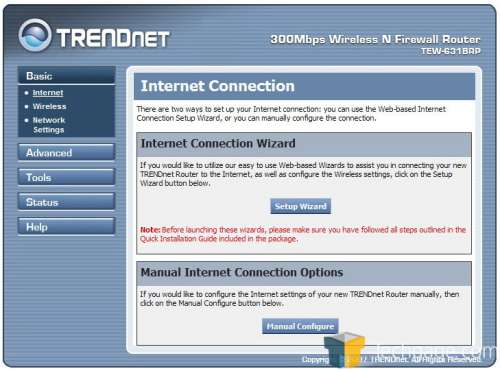 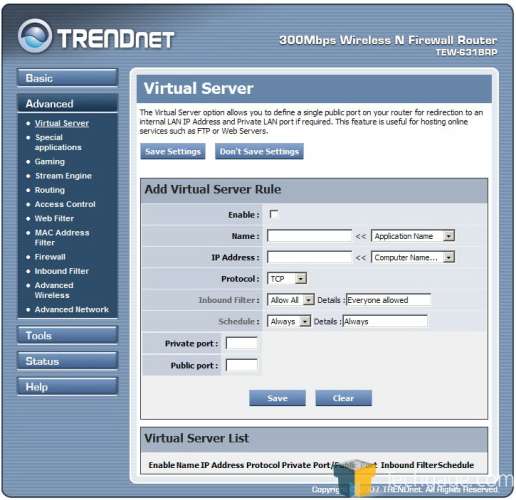 In the tools page, you can setup your own administrator password, point the router to a time server online or sync it up with your own PC’s clock, setup the TEW-631BRP to email when settings are either carried out or changed, update your firmware as well as a simple system check that is comprised of simple ping checks. In the status page, we found the information of our network as well as connected devices. 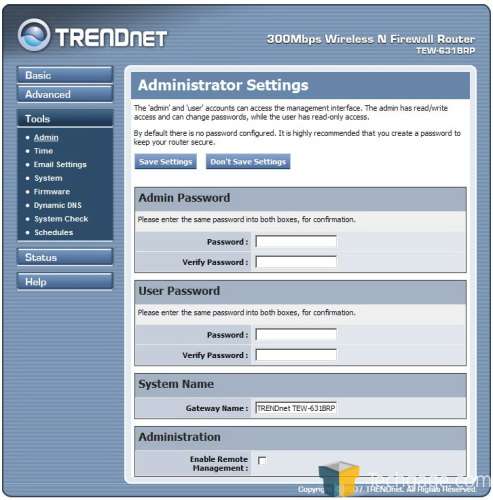 This is a simple way to check for lechers as it will give you the IP address of any connected devices and allow you to change your settings should you find one of those damned dirty lechers. There is also a help section that will allow you to check the definition and read an explanation of each of the commands available in the router setup.

As in our other router tests, we take a real world approach in our methodology. We have a simple 600 MB file that we transfer across the network both using the Wireless N 621PC from TRENDnet as well as the built in 802.11g adapter in our test notebook.

Our goal in this test is to showcase the difference between using a Draft N connection and the more common 11g. It should also be pointed out that the theoretical limit of Draft N is a staggering 300 Mbps while the 11g protocol is much slower at 54 Mbps. Keep in mind though, these are theoretical speeds and you will assuredly never see speeds such as this any time soon.

The machines used in our test were: 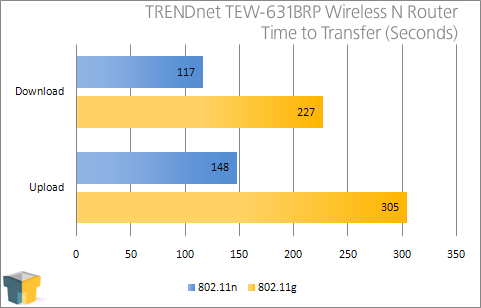 As the graph indicates, the Draft N performance was twice that of the 11g. While this is impressive, it’s expected. With performance in mind, speed in only one of the added advantages of using Draft N hardware. The second is range. Heralded as a double in range, the Draft N protocol should prove to be powerful enough for me to roam around the building, testing out whether or not we had a signal on our notebook.

In my venture, I was able to get all the way out of the building with Draft N but halfway down the drive as well. When we tried this same approach when connected to the 11g signal, we were able to get just over half the distance of 11n. While again, not surprising, the range of N is clearly stronger, giving access to more areas of a home than that of G.

When looking back over our experience with the TEW-631BRP, the most important thing that we kept coming back to was the price. Intending to compete with the bigger home networking companies here in the states, the TEW-631BRP can be found online for around 65 dollars. Clearly these are priced to sell and in talks with TRENDnet, they have moved a lot of them into the retail channel… encouraging news indeed.

The performance of the TEW-631BRP was solid as well when compared to that of a regular 802.11g connection. In the coming week, we will be releasing our review of TRENDnet’s flagship router, the TEW-633GR gaming router. This router included 4 gigabit ports on the back and is positioned quite well to compete with the D-Link DIR-633. We have been examining the performance differences between both TRENDnet routers as well the D-Link so stay tuned. 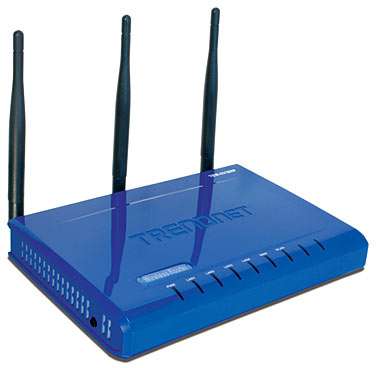 Getting back to the TEW-631BRP, it’s priced so well that it might make sense for many to upgrade that old 11g router you have at your house to a router such as this one from TRENDnet. In all honesty, this seems to be where TRENDnet is aiming their pricing scheme.

The more homes they can get their products in the better and for those in the market for a simple and easy to use Wireless N router (regardless of how ugly it actually might be), the TEW-631BRP from TRENDnet should get your consideration on your list of routers to look at. For the price and performance, the TRENDnet TEW-631BRP earns an 8 out of 10.