With so many MP3 players on the market today people are unsure what is good and what to look for. Well the Ultra 256Mb MP3 player boasts many unique features and looks to be quite promising. So, without further commentary lets begin the review!

As you can see by the images that the MP3 player comes in one of those nearly impossible to open plastic cases. It showcases the MP3 player well. I suggest using a sharp box cutter and run it along the edges to open it, taking care not to cut into the cardboard backing lest you cut the booklet inside and damage the program CD. The plastic casing is very sharp when cut, so take some care, don’t just rip into the sucker or you’ll end up with a really nasty slash or two.

The player is small, but not extremely small because of all the features it contains. On the end there is a removable cap that blends in, hiding the USB port plug-in. The backside is where you can insert extra memory for the player, though the player comes with 256 MB built in. All buttons are small but not so tiny that they are difficult to use.

To turn on the player you just push the top button, which is also the stop button. Play and pause is the bottom button, and to sort through your play list you push up or down on the joystick. Pushing left or right on the joystick will turn the volume up or down. Press the joystick in and it brings up the menu.

There are so many features to this little thing that I was boggled as to where to start. I decided to try out the main feature, and sorted out my MP3’s while the player charged. The fact that you can plug the MP3 player into your USB port to charge it is great, it comes with a rechargeable battery and it also uses normal batteries, though those cannot be recharged via this manner.

The only downfall is that it has to be recharged through a PC. One small AAA battery will work great, although the rechargeable battery has decent life of it’s own, as I found using the player almost all day doing chores. If your traveling, however, I would be sure to keep a packet of AAA batteries handy, just in case your chargeable battery runs out of juice.

Uploading the MP3’s is easy, the player comes with a USB extension cord that you can hook up to the player and the PC, or you can plug the player directly into your PC, whichever would work best for you. Go into your system’s ‘My Computer’ and find the removable HDD icon, which would be your MP3 player. Mine was marked ‘H’, but if you have another portable HDD device plugged in it may be different for you. Then you can just drag and drop, or copy and past your MP3’s into the window.

Close and safely remove the MP3 player from your system and wallah! You have music to take with you anywhere you go! Since the player is small it fits into a pocket easily, making it perfect for jogging, hiking… just about any outdoor activity, and even while your working, which for me is fantastic. Uploading files can take a few minutes, but this fact did not bother me.

The sound quality is great, and the headphones are small and light. If your not used to headphones that go in your ear they may feel slightly uncomfortable. They also double as a microphone for the voice recording function. Located at the top of the player is a small loop hole with a thin bar, meant to string the headphones to the player. Actually looping this braided thread through is the only difficult process with the player.

As stated the device also has a voice recorder. You can record a blurb or even a short conversation. I myself wouldn’t use this feature much if at all, but it may be useful for recording a friend’s phone number or something important if you don’t have anything to write on. The messages can be played back by accessing the menu and scrolling down to Voice Player, and to record just scroll down to Record and push the play button, which will start recording immediately. Push the stop button to quit recording. A handy little feature that many may find useful.

Next I decided to try the email function. Of all the features on this device I find this one the least used and the most needless feature. Going into your My Computer, you can access the player’s drive icon, and you’ll be able to use the mail function under the My Tools folder. Here you input your pop and smtp info, and can write, send and receive emails. In order to even use the email client you have to have the MP3 player plugged into a PC. Now, this would be a good tool for someone wishing to check their personal email at a friend’s house, or perhaps from work. Though, only emails that allow use of pop and smtp forwarding can be used. 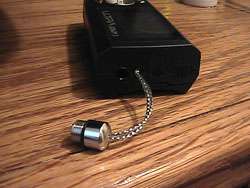 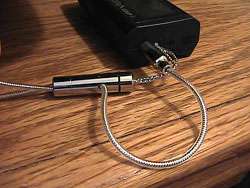 Most MP3 players double as a Pocket Drive, and this player is no exception. To upload image files or documents just follow the same process as you do when uploading an MP3. Its simple and easy and a great feature that I find very useful.

A feature that I am unable to test is the SD and MMC card expansion slot, for I do not have a memory stick available to do so. Even so this is good feature for those of you who wish to expand the player’s built in memory so that you can store more MP3’s and files. You can upgrade the memory from 256MB to 768MB. This is a significant increase and is a popular feature in most MP3 players today.

The FM Radio Tuner sounded great, for I do like to listen to the radio while I’m out taking a walk. Yet the stations never really came in that great. In order to get a station in halfway decent I would have to constantly move the device all over, and even then it wasn’t that great. Then you move and it’s back to fizzing again. For on the go the radio function isn’t that great. Unless there is a way to boost its receiving, it isn’t even worth the effort of listening to… or perhaps your into static. It is possible that because I live a small town my stations just don’t come in as clear as they would if I lived in the city. However, I’ll just stick with my MP3’s.

There is also a language learning function, yet the booklet does not say how to use it. I believe that this feature is actually the fact that the player is usable in several different languages. There is also a play list editor program that comes with the player, but is not yet functional with the player, and will be made for use later. So, these two features will be discussed in the forums once more information is obtained.

Overall I liked the player, it was easy to use when it came to its primary features and that was all I really wanted. The extra features weren’t really necessary to make this a good item, and I find that most of those extras just clutter it and are not that useful in the first place. Having a price of $129.99 (Although it’s rare to find it that high) it is quite expensive, compared to the RCA Lyra 1072 MP3 Player that we reviewed last week with a price tag of $79.99.

Even so the player was great and despite all the unnecessary extras it did well. Thanks to Mike from Ultra for allowing us to review their player!