External hard drive enclosures are a dime a dozen, but those that build in wireless functionality are not. So I had great interest when I discovered Vantec’s just-launched NexStar WiFi dock, one that supports both WiFi access and a high-performance USB 3.0 connection. Does this jack-of-all-trades enclosure prove its skill with both of these features? Let’s dig in and find out.

Years ago, the benefit of wireless storage may not have been too obvious, but today, many of us have smartphones, tablets, media players, smart TVs, video game consoles and so forth – all equipped with WiFi. But WiFi is just half of the equation – storage is the other. A smart TV might have no internal storage, but with an enclosure like this, that problem is remedied fast.

Vantec’s goal with its WiFi dock is to give those equipped with UPnP devices an easy way to either manage files, or stream them. Aside from mobile devices, any PC with wireless can be connected to the dock so that the files can be managed via the OS file manager. 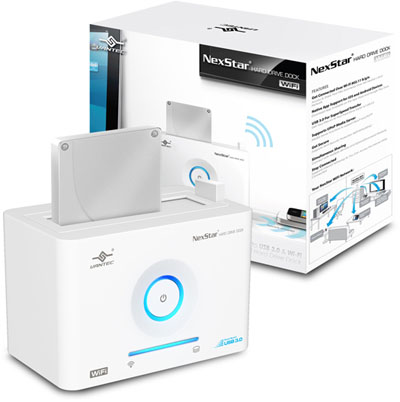 Before we go too much further, let’s take a look at this NexStar’s capabilities:

What in the absolute FLAC? There’s support for MKV, but not for FLAC? Words… I don’t have them!

Aside from that glaring omission, the rest of the format support is good. As long as you have a fairly recent iOS or Android device, you’ll have no problem using it with Vantec’s dock.

Speaking of the dock, let’s take a look at it, shall we? 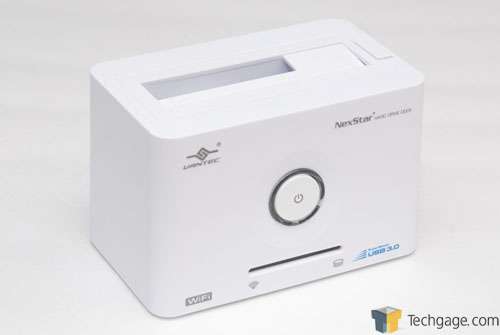 At this point, I’m not sure what I would have preferred – FLAC support, or this dock to come in black. As you’ll quickly see, photographing products as white as this is tough. But I digress. In the above shot, we can see the dock, sans drive. As mentioned in the specs table above, this dock supports both 2.5″ and 3.5″ drives, and as we’ll see in a moment, Vantec has constructed the dock to make sure the smaller drives are kept stable when in use. 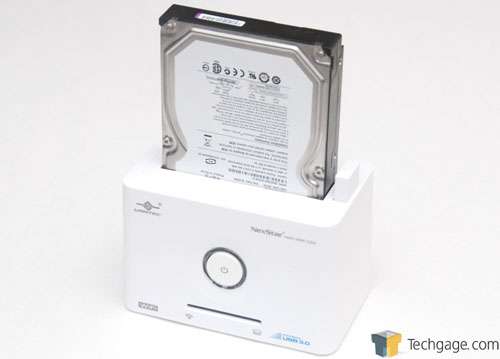 Both the ring around the power button and the strip below that glow a bright blue when turned on. Not quite room-brightening, but it’s sure going to be noticed. To the bottom-right, you can see the mechanisms I mentioned a moment ago that keeps whatever drive is plugged in secure. I haven’t used an enclosure before that had a lever to support the smaller 2.5″ drives, so I was happy to see it here. That extra bit of stability will be important if you ever happen to knock the dock with your sock – err, off your desk. 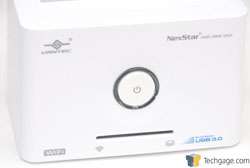 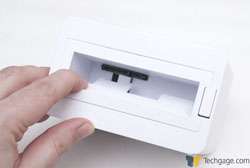 The last two “tour” pictures include a look at the back, which only features a port for the power connector and USB connector, and also a shot of the included AC power adapter and USB 3 cable. Unlike most every other USB 3.0 cable I’ve seen, this one actually isn’t blue, but rather white to match the enclosure itself. 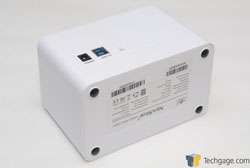 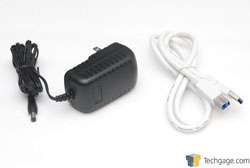 Using this enclosure for USB 3.0 purposes is simple – so simple, I’d like to consider it common-sense. The WiFi is a different story, however. I had expected the dock to include software that would allow me to configure it, but not so. Instead, you need to download the official app either from Apple’s App Store or Google’s Play Store and then reconfigure your phone or tablet to connect to the WiFi AP the dock creates.

In the above-left shot, you can see how the WiFi AP comes up in the wireless settings on Android. On the right, we’re inside the settings area of Vantec’s app, which allows us to update the firmware, reboot the drive and most importantly, configure the wireless security and even tether. Tethering is going to prove very important if you hope to stream content from the dock and still remain online. 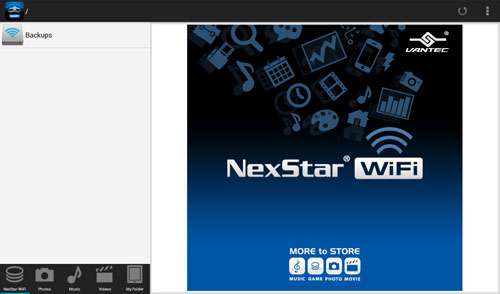 The settings menu can be accessed to the top-right, while the main app sections can be seen to the bottom-left. At this time, I’m not sure what the purpose of “Music”, “Video” or “Photo” is, because over the course of a half-an-hour, testing out different things, I couldn’t get a single thing to show in either one of them – despite having a hard drive plugged in that had an abundance of each type of content. If this is broken functionality, then I’m willing to bet it will be patched-up quick. This dock isn’t available for purchase quite yet, so it could also be a bug of some sort. If I hear from Vantec on this issue, I’ll update the article.

In the event a file format is not supported through Vantec’s app, an “Open With” prompt will pop-up (on Android; I assume iOS is similar), which asks you which app you’d like to open it up with. It’s fairly basic stuff, but it works. The second shot below is mainly there to show the non-functional Photos section. When this screenshot was taken, I had the app sitting on that section for ten minutes, just in case that’s all that was needed (there wasn’t a progress bar, however).

In all of the screenshots above, you can see a “My Folder” option to the right in the set of 5. This is to browse the media on your device – useful in case you want to stream from it, or if you want to upload data to the dock.

To test out the performance of Vantec’s NexStar WiFi enclosure, I used HD Tune Pro along with a Seagate Constellation ES.3 4TB and Kingston HyperX 240GB SSD for testing via USB 3.0, and then stuck with the Seagate drive to perform a quick real-world test over wireless.

For USB 3.0 testing, we used our current test bench equipped with an ASUS P9X79 PRO, which uses an ASMedia controller. For wireless, we used ASUS’ S56C notebook, which we took a look at just last week.

Let’s first take a look at the mechanical hard drive, which delivered some rather impressive results. In fact, it performed exactly the same here as it did when plugged into the native SATA 6Gbit/s port on the motherboard. To be fair, this shouldn’t come as a surprise, but it’s reassuring. 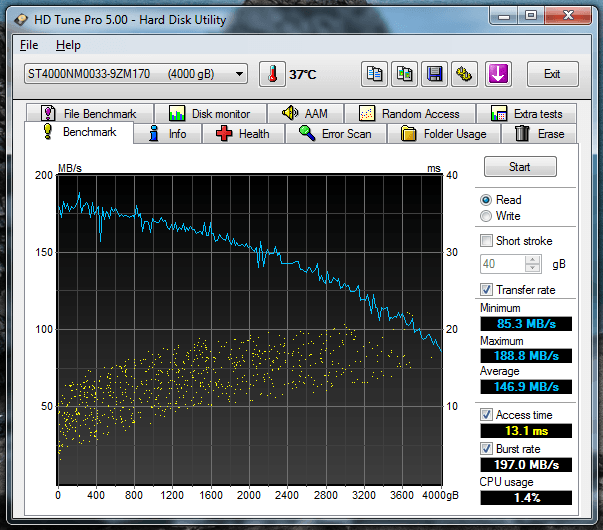 The SSD didn’t fare quite as well, however, at least in terms of peak throughput. It performed at about 50% of its peak versus having it plugged straight into a SATA port. While unimpressive, who uses their docks for SSDs? To attain maximum SSD speed, I’m sure a more expensive controller would need to be used, and given the number of people who actually need to use an SSD in their dock, I think the reason to go against a more expensive controller is justified. 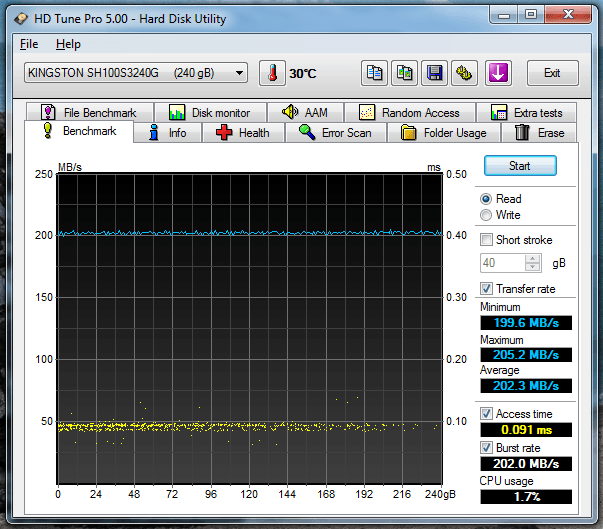 Given the fact that this dock boasts wireless, I expected it to perform quite well, but that wasn’t the case at all. To perform a quick test, I loaded up ASUS’ S56C and then transferred a folder of FLACs. This was the result: 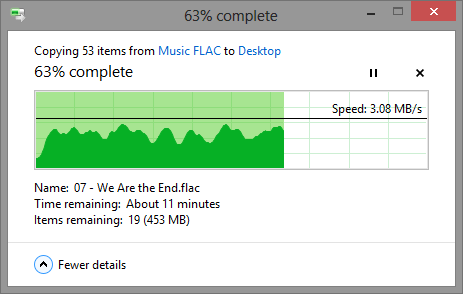 The entire transfer was sporadic in performance, dipping to 1MB/s and then back up to 3MB/s – both of which are a far cry from 802.11g speeds, much less 802.11n. I tested the transfer on a secondary notebook as well, and experienced the same lacking performance.

For the most part, Vantec delivers a nice product with its NexStar. It’s easy to set up, either for wired or wireless connections, looks good, and for the basics, works well. But where it falls flat is with regards to wireless performance – a bit unfortunate since that’s the biggest selling-point of this device.

With 3MB/s max speeds, there’s just no use for this dock where transfers are concerned. I streamed a couple of 720p and under videos, and those streamed just fine, but I’m not so sure about streaming to multiple devices at once. Apart from the transfer performance itself, merely connecting to the device at times was finicky. On one notebook, it timed-out twice in a row trying to connect. After I turned the dock off and on, it connected fine, but again, with horrible throughput performance. 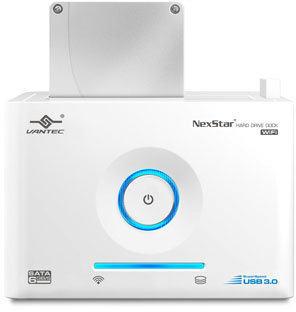 Perhaps even more than the wireless performance, the biggest fault of this enclosure is its inability to utilize both wireless and USB 3.0 at the same time. This just shouldn’t be the case. Most people are not going to want a dock that will only be used wirelessly (because it’s inherently slow to move files around), and likewise, no one is going to want to plug and unplug it all the time.

Instead, people should be able to connect it to their computers and just forget about it. They’d be able to both manage the files using a high-speed connection and also stream to their wireless devices. Whether this is something that can be fixed via the firmware, I’m not sure.

At this point, pricing hasn’t been revealed, but I’d expect the dock to hit retail in less than a month. Thermaltake’s BlacX 5G retails for about $50, so I’d expect this to sit closer to ~$70 because of its wireless functionality.

I wouldn’t recommend this dock at this time, given all that we’ve seen from it. It’s unfortunate, because it promises a lot, and does a lot of things well. If we hear back from Vantec with regards to potential issues or a firmware update that could help things, we’ll update the article with our revised findings.