After months of anticipation, the PC version of Destiny 2 is soon to drop. That being the case, there may be things you’d like to know about before jumping in, whether you’re entirely new to the Destiny universe, or are transitioning from the original on console. Fortunately, some of those things can be found right here!

Level Up Slowly, Or Quickly – It’s Entirely Your Call

If you’re a “get to the end-game as quick as possible” kind of person (like I will be, as I will essentially be starting my fourth character), your time will be well-served by focusing on Public Events scattered around the world. These seem to give the highest possible XP reward for the amount of effort required in the game, and since they’re actually fun to do, it’s a satisfying way to level up, and gear up.

If you’re more of a casual gamer, and especially a solo one, you’d do well to pay attention to the Lost Sectors found around the map (the game will fortunately introduce you to them at some point), as well as Adventures. Lost Sectors are entire areas hidden below the area you’re in, and after traversing down and beating a small boss at the end, you can loot a chest with some gear. Adventures are like mini-quests that reward you just the same, but at least to me, they are not as satisfying as Public Events or Lost Sectors, and you’re bound to reach a point real quick where your Power Level will be too high to make them relevant, anyway. 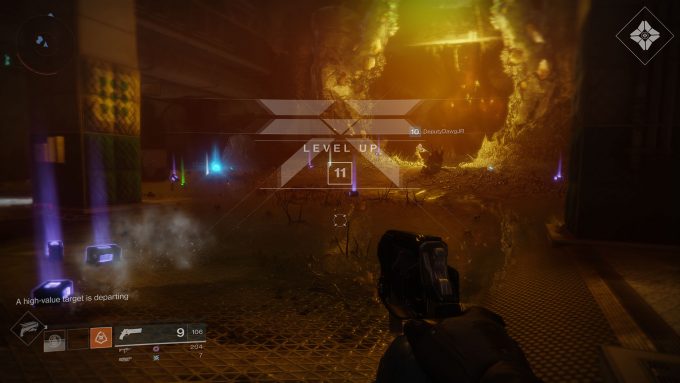 Don’t expect to get to 20 and suddenly have the full game unlocked, though. There are still some steps required to unlock the bulk of the game, which at the very least requires you to complete the main story. If you reach level 20 before you complete your important prerequisite steps, you’ll begin to earn Legendary gear quicker (since that’s tied to level, not progress).

Public Events are one of the best additions to Destiny 2, as far as I’m concerned. It allows up to 6 Guardians who happen to be on Patrol (simply exploring a given planet) to team up and take care of business, wherever that business may happen to be (blue diamond icons on the map will highlight Public Events).

After clearing through a Public Event, a chest will spawn, and you’ll be able to enjoy whatever loot Bungie’s randomizer decided to leave for you. If the Public Event becomes Heroic, the quality of the loot improves, granting you a better chance at earning an Exotic Engram – or in other words, an Exotic armor piece or weapon.

What the game doesn’t explain at all is how you turn a regular Public Event into a Heroic one. Because each Public Event requires a different method of triggering the Heroic, I am not going to explain how to do each one. If you are truly desperate to know, you can refer to this Polygon guide (I am considering doing a similar video guide, but at higher resolution and higher FPS – let me know if that’d be useful!)

What I’d recommend doing as a new Guardian is keeping your eyes wide open during Public Events, to see if you can figure out on your own how you’re supposed to trigger the Heroic. In most cases, the steps are not entirely intuitive, so don’t be afraid to look at your fellow Guardians and see if they’ve happened to figured it out. If you see a random guy shooting at a totally random object – maybe there’s a reason!

Can’t Find People At A Public Event? Reload The Instance!

This is unfortunately a bullet point that tackles something people shouldn’t have to endure: Public Events that don’t have a single other soul present. In most of my Destiny 2 life so far, I’ve found myself really annoyed by going to a Public Event area and finding no one else there, so I decided to take the advice of a random stranger at reddit and simply load back into the same area over and over, hoping for the best.

AMD Radeon RX Vega 64 - Unfurled Packaging
Sometimes, you will arrive at a public event by your lonesome

If you’ve never paid attention to Destiny 2 up to this point, Public Events show on your map as dark blue diamonds which have an orange border that fills up as the event nears its start. Personally, at around the 1-minute-start mark, if no one is still in my instance, I’ll load up my map and travel to the exact same drop spot I used before. Sometimes even that’s not enough – I’ve had to reload the instance up to three times before I’d see people doing the event, but there were also times when I’d have to give up because no one would ever end up appearing before the event itself disappeared.

It takes more than one person to complete a Public Event, and honestly, since it’s a “Public Event”, that much is probably obvious. This tip is me assuming the PC version will be just as bad for Public Events, but I pretty much have to assume it’ll be the same way at this point.

Understanding How The Crucible (PvP) Works

Not long into your Guardian’s life, you’ll be able to hop into the Crucible to try your hand at taking down some enemy players. There are two primary modes in Destiny 2, both acting as playlists. Quick Play will let you play Clash (Team Deathmatch), Control (Zone Capture), and Supremacy (Kill Confirmed). Competitive has Countdown and Survival, and is arguably the much more difficult playlist. Don’t worry: you’ll be playing both before you can begin choosing which mode to play on your own.

A couple of weeks into the game’s life on console, I was playing a Supremacy map with a friend, and despite performing seriously awful that night, we ended up winning. Why? Because I stopped focusing on killing, and started just running around the map, picking up crests that half the people seemed to be ignoring. I won the round without focusing on killing, just because other people didn’t understand the concept of the mode.

Countdown may be a little hard to understand at first, too. At the start of a Countdown round, you’ll notice numbers at the top; usually (or maybe always) 8. If you die, that number goes down. If your teammate dies… ditto. Once those numbers hit 0, anyone dying after that point is out for good. Well, at least until the next round. It’s an exciting game mode, albeit one that can make the match (and round) durations fairly long.

Use The Companion Apps & Community Websites!

If there’s such thing as a “best kept secret” in Destiny, it’s that companion apps exist that most people don’t use. And it’s not for good reason. The amount of people I’ve bumped into who’ve never even used the official Bungie produced Destiny companion app blows me away, because if I didn’t have apps like it, I don’t think I’d play. That’s not an exaggeration.

I hate to be blunt, but the in-game item management system is absolute junk in Destiny 2 (the same reality cursed the original). Finding an item you need in your vault is like rummaging through the discount movie bin at Walmart – you have to dig to find what you’re looking for. Apps like the official one from Bungie allow you to log into your account on your phone (or tablet), and move items between characters, or between your characters and your vault. In the case of the official app, you can also track quests and things like that, although if you’re already in-game, that information isn’t too hard to gather (unless you’re wondering about a character other than the one you’re on). 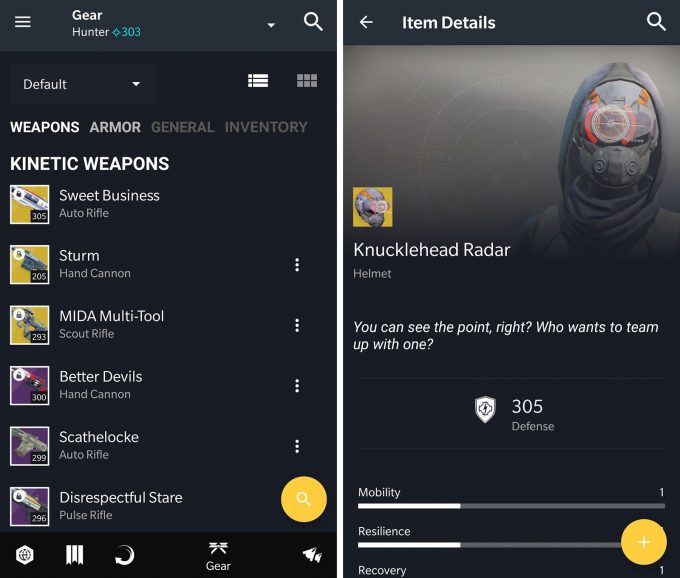 A couple of alternatives include Ishtar Commander on mobile, and Destiny Item Manager on PC (seen below). I use both Ishtar and DIM while playing, depending on whether I have my laptop next to me. Both serve the same kind of purpose – allowing you to move items around while playing, and avoiding the actual in-game vault at all costs (seriously, it’s bad). 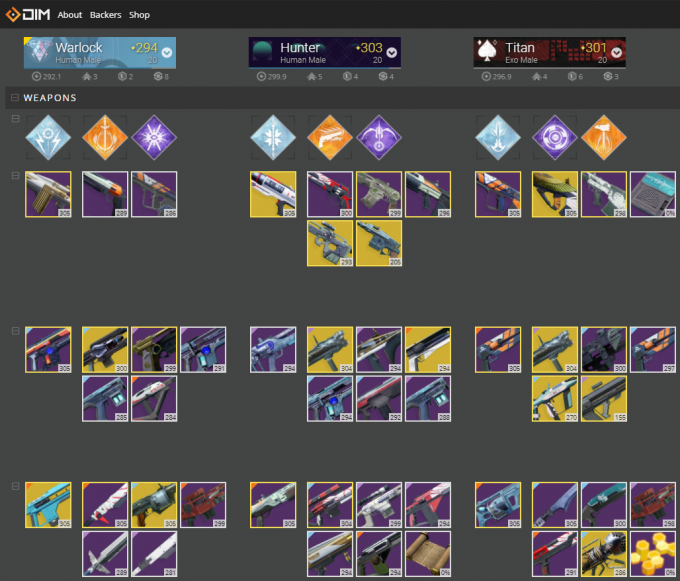 Ishtar Commander is available for both Android and iOS, whereas DIM can be used in any web browser (including on mobile, although experiences will vary). If you use these apps, and then stop; believe me, you’ll quickly pick up using them again. At least for me, they’re an extremely valuable addition to the game.

And speaking of that, also valuable is the Destiny community over at reddit. The game’s biggest Destiny subreddit is /r/DestinyTheGame, but another worth checking out is /r/Destiny2. Want to hook up with random people targeting the same goals? You can hit up /r/Fireteams to either create a post, or see if you can get in on someone else’s run. For those who want to look good, you may wish to peruse /r/DestinyFashion to get some ideas.

If you managed to read through all of that, then you deserve my praise, Guardian! Hopefully by now, you’ll feel a bit more comfortable jumping in, and if at any point you’re confused by anything while playing, you can comment your question here, or refer to the many subreddit communities I linked to above. 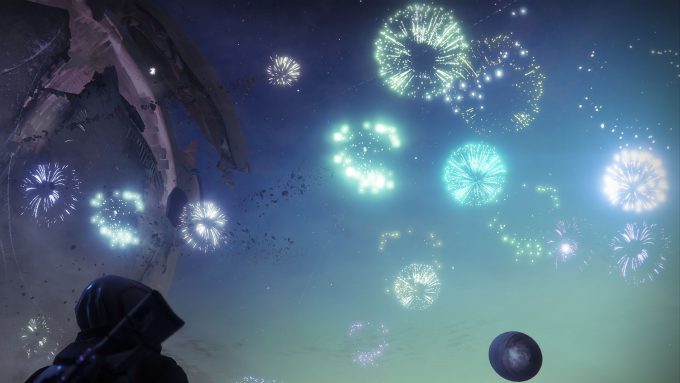 For the launch of the PC version, I am planning to stream the game to our YouTube channel for much of the afternoon and evening. So, if you’re bored at work, or want to see what the game is all about (and ask questions), stay tuned, and I’ll post the link to our social channels (and our news section) when the time comes. After giving myself the first day to play, I’ll jump on benchmarking after I hop off for the night, and work on getting a detailed performance look up the day following. For initial benchmark results, you can refer to the benchmarking guide I produced for the beta.

And with all of that said, I look forward to bumping into you guys in-game! Mouse and keyboard? HIGH FRAMERATES? Bring it on! I am just a little bit excited…