I tested the Mionix Castor under various conditions, using it in gaming and non-gaming roles. The primary focus of the performance review will be on its ergonomics and functionality as well as some comments on its perceived quality of construction.

Ergonomics is one of the Castor’s main selling points, so that is an area of intense focus for this review. Long story short, the Castor delivers on its promise that it is well-suited for any type of grip-style.

There are several reasons why it works well. First is the shape. 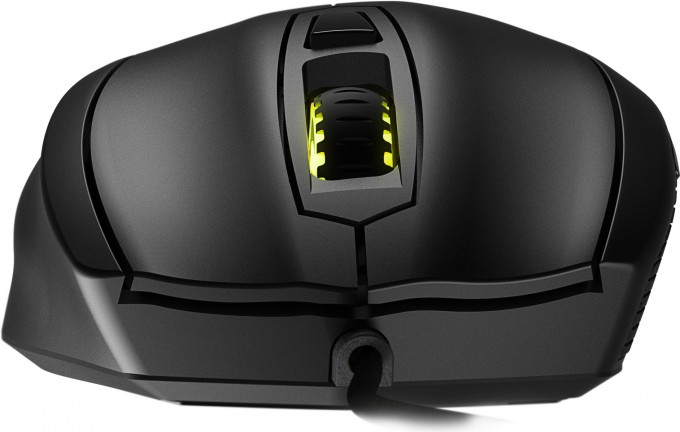 The front view shows that the Castor’s top surfaces mimic the shape of the human hand fairly well. That means the user’s hand doesn’t need to contort itself into an unnatural shape when holding the Castor. It’s a simple idea, really, but it works very well, as can be seen with other claw-style grips.

On the left flank, right under the thumb buttons, a patch of textured rubber provides a great gripping surface for the user’s thumb. The texture and material are perfect for making the hand feel like it’s connected to the mouse. No matter how you hold your mouse, your thumb will need to be in constant contact with it, and this patch of textured rubber accentuates that feeling of connection.

The four layers of rubber coating on the Castor’s top and flanks also make this mouse suitable for all grip styles. The rubber coating is grippy without being sticky. This is not a new idea for gaming mice, but Mionix’s execution of the concept on the Castor might be the best yet that I’ve reviewed.

As good as the Castor is in terms of ergonomics, it is just as good in terms of functionality. Six is an adequate button count. The software allows you to tweak the mouse’s performance characteristics and tailor it to your style. Anything you want to adjust on it can be adjusted to suit your needs.

It’s great that the software component is really easy to use, too. Plus the ability to store profiles and settings onboard means you can take your Castor with you, plug it into another PC, install the software, and apply your stored settings and user profiles in just a few minutes.

As far as build quality goes, the Castor feels solid. Button presses feel satisfying, and the materials used give users the impression that this is a high-quality piece of kit. The software component is also stable; it never exhibited any unexpected (and undesirable) buggy behavior during my testing.

The Castor is the newest star in the Mionix galaxy. And, just like its namesake, it just might be the brightest one so far.

While it may seem hyperbolic for me to say this, it really seems like it’s the perfect gaming mouse, at least for me. It’s pretty much flawless.

It delivers on its promise of being ideal for any grip style. Its shape, the materials used in its construction, and certain features (the finger grooves on the right flank, the textured rubber patch for the thumb on the left flank) all add up to what might be the most ergonomic gaming mouse I’ve tested yet. No matter how you hold this thing, it will never tire your hands or fingers out.

In addition to its superior ergonomics, the software component really maximizes the Castor’s functionality and performance potential. The ability to dial in your mouse precisely to your needs and usage patterns is an oft-underestimated aspect of owning a gaming mouse, but Mionix didn’t cut corners with the Castor. If anything, the software is as good as any I’ve tested. That it looks as good as it works is a testament to the expertise of Mionix’s engineering and design staff. The Castor can pretty much do anything you want it to, short of making money grow on trees, that is.

Plus its hardware is top-shelf too. The optical sensor is as precise as any out there, and the buttons are so satisfying to use. The ARM processor makes sure performance is lag-free, and the onboard memory is a feature that used to be the preserve of just the most expensive gaming mice on the market.

Mionix prices the Castor at $69.99, which is a really great value given everything on offer. So, not only is it a superb product with great performance, it’s also sitting in the sweet spot price-wise.

The Castor is definitely a super-bright star in a galaxy of gaming mice. It’s only natural that it has earned Techgage’s Editor’s Choice award.