The last game I would have ever expected to see released this month on Steam was Duke Nukem 3D, but lo and behold, it’s here. Dubbed the “Megaton Edition”, this one packs in upscaled graphics, three add-on packs and soon, multiplayer. Oh, and achievements. Let’s check it out, and compare it to the classic version and the HRP.

Think March belongs to Tomb Raider and BioShock Infinite? Then you need to hail to the king, baby. Last week, Duke Nukem made his first post-Forever appearance on Steam. I admit that I never expected to see DN3D on Valve’s service, but I’m glad to have been proven wrong. Better still: it’s not just some straight port.

The Megaton Edition, as it’s called, brings with it an OpenGL renderer along with three add-on packs: Caribbean: Life’s a Beach, Duke it out in D.C. and Nuclear Winter. Of these, Caribbean is the only one that originally got the a-OK from 3D Realms to be produced, though the company later adopted the unofficial Duke it out in D.C. to include it in its Kill-A-Ton Collection.

Despite having purchased Duke Nukem 3D too-many-times in the past, I couldn’t help but check out the Megaton Edition and see what it brought to the table. Plus, the allure of having the three aforementioned add-ons available in such an accessible manner really appealed to me.

Throughout this brief article, I’ll talk a bit about my initial experiences with this edition, compare some graphics to the original game and also the High Resolution Pack, and finally, give a quick tutorial on how to install the HRP with this particular edition.

Like the Xbox Live Arcade variant of Duke Nukem 3D that came out a couple of years ago, this port features a revamped menu that’s high-res, fluid and simple-to-use. Though the graphics have been improved (slightly) in this edition, there are no graphics options to tweak – outside of reverting to the “Retro” mode which simply disables the OpenGL smoothing.

Unfortunately, the game was unable to launch with a multiplayer component, but the developer has stated that it’s in the works. Also, if for some reason Duke’s latest appearance on Steam does little to excite you, you may be interested to know that an enhanced Shadow Warrior edition is en route. I can’t help but hope that the developer might tackle Blood as well in the future. 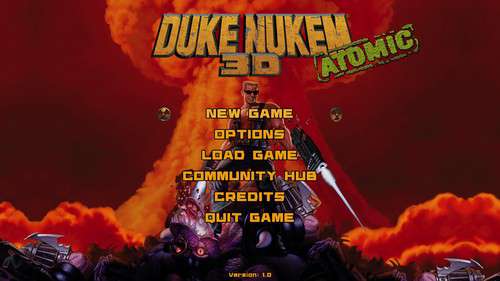 As mentioned above, what makes this a “Megaton” edition is 1) OpenGL, 2) Support for higher resolutions, 3) Cloud saves, 4) Support for Windows and Mac OS X and 5) The inclusion of the three level packs. The graphics are not “upgraded” at all, but merely scaled upwards and smoothed over. The truest experience to the original, while still being able to play at more comfortable resolutions, would be running the classic game through EDuke32. This in effect is the next-best thing, if you happen to appreciate smoother graphics.

At the moment, the game is relatively bug-free, although there is a lingering “floaty” mouse issue floating around (sorry) that the developer is actively working on a fix for. On that topic, I have to say that the level of interactivity with the developer on the Steam community hub for the game has been quite nice – the folks there are even considering implementing some fan suggestions for future achievements. Suffice to say, it seems like the game is going to be well taken care of for the foreseeable future. One would hope this support also includes the introduction of support for user maps – something the game lacks at this point in time.

After having played the Megaton Edition for a couple of hours, I’m left pretty satisfied. I wouldn’t have hated to see the game updated with a new engine and updated graphics – a la HRP, but that’s already been done. Unless we see the game recreated in an up-to-date engine in its entirety, this edition makes a pretty good complement to the HRP and classic variants.

Speaking of those, let’s take a look at some comparison shots, shall we? For the sake of ease, you can download all of the comparison images in one go with this archive (4MB. ZIP). 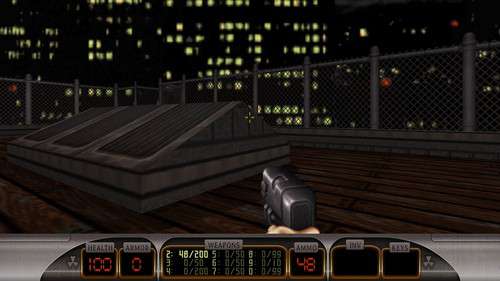 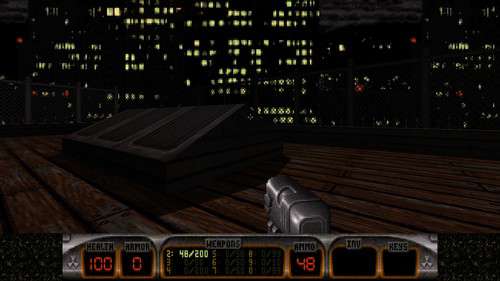 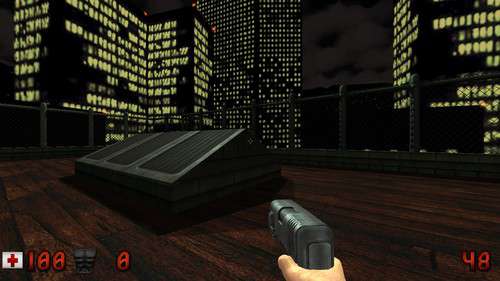 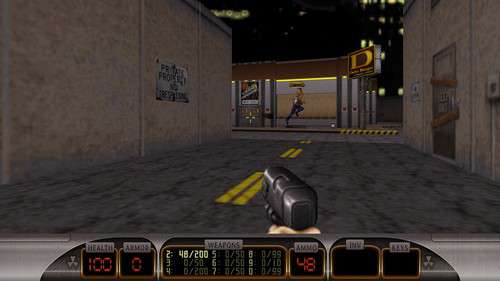 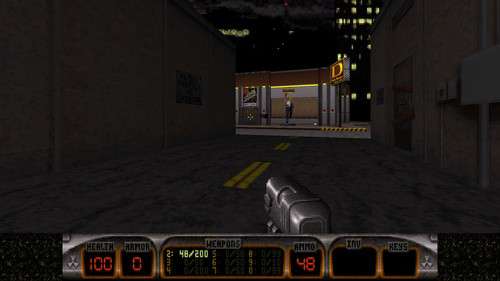 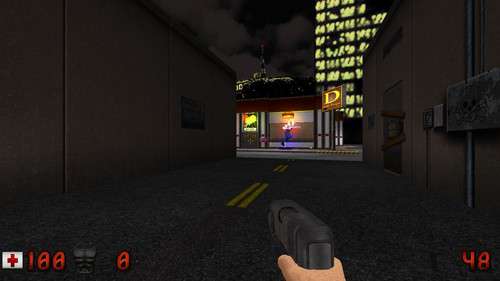 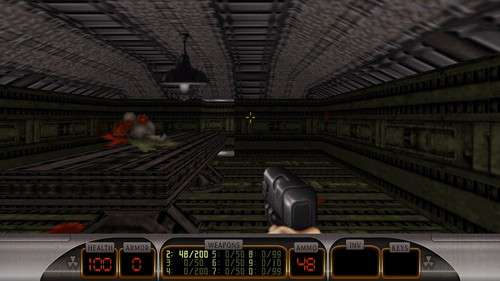 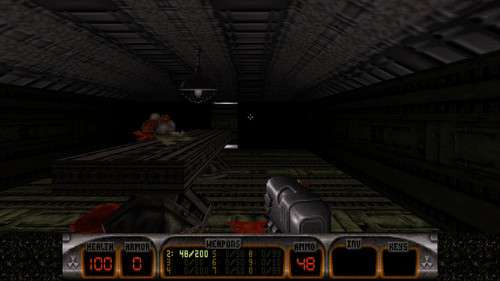 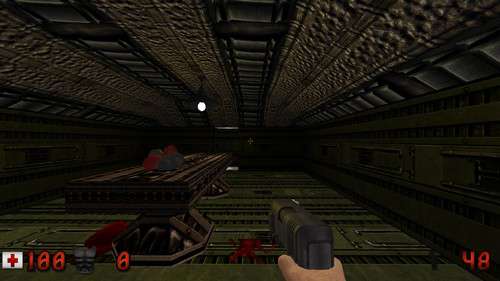 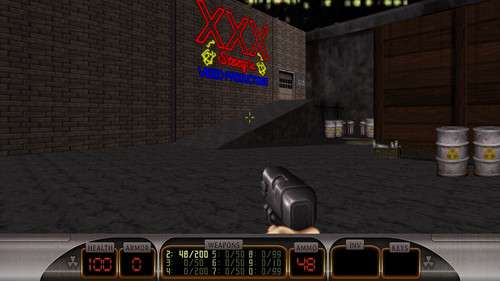 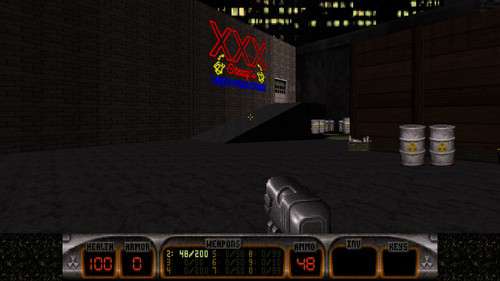 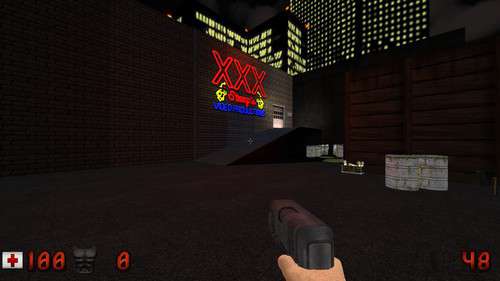 The original Duke Nukem 3D was a notoriously dark game in parts, and it seems that the developer of this Megaton Edition wasn’t ignorant of it. As can be seen in all four examples above, the lighting in the Megaton Edition is much-improved over the original – although that’s a fact that’s going to be debated. I personally prefer the lighting in the HRP compared to the others, but would definitely opt for the Megaton edition over the original.

Likewise, I tend to prefer the graphics upgrades that the HRP offers versus simple upscaling. Sprites are a rather funny aspect of DN3D. Because they’re everywhere, their “downsides” become apparent quick. Of course, this game was released in 1996, but even then, having items that faced you no matter which angle you looked at them at seemed weird. The HRP (mostly) takes care of that throughout the game, as most sprites are replaced with real 3D models.

In the end, whichever graphics mode you prefer is definitely going to depend on your tastes – the upside is that all three variants can be done with this single edition. Some may prefer the classic because that’s the “way it’s meant to be played”, while some will appreciate the simple upscaling and smoothing. Me, I really appreciate the advanced graphics of the HRP, which I’m sure is obvious by now. Everything from the models to the lighting, I much prefer it over the original. Further comments and information can be gleaned from my look at the HRP that I posted this past November.

For those who agree with me that the HRP is where it’s at, you’ll be happy to know that the Megaton Edition includes the original game in its DOS format. So, while mods cannot be directly applied to this updated version, they can be to this classic version. That means that EDuke32 and the HRP are just a couple of quick steps away – steps that I’ll explain at the bottom of this page.

But before we get to that, have a quick look at the awesome splash screens and an in-game screenshot from each of the three add-ons included with the game. 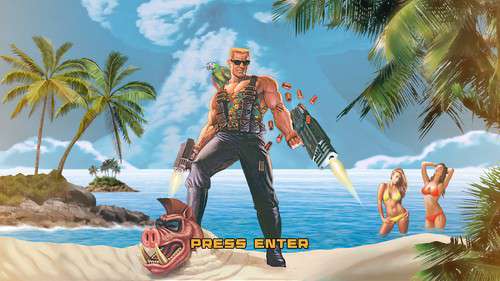 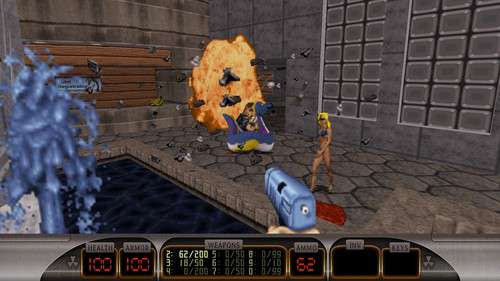 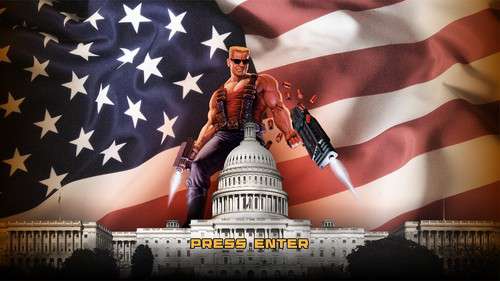 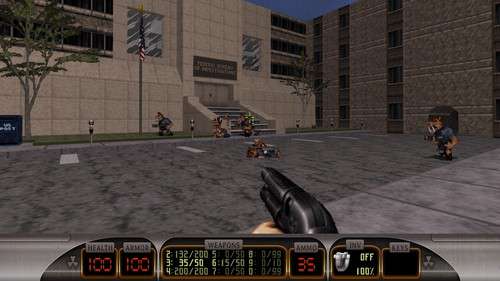 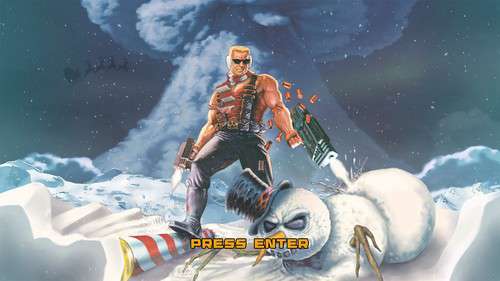 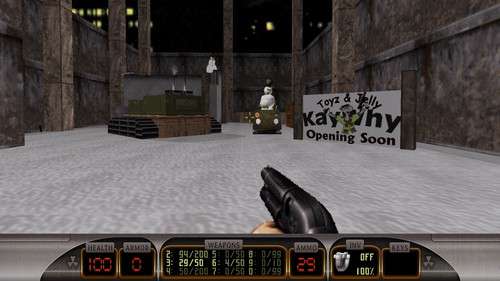 Note: You cannot earn Steam achievements with the classic version of the game.

Installing the High Resolution Pack with the Megaton Edition is simple, because the included original DOS version has been left unaltered. The first step is no doubt obvious: you need to go acquire the HRP. To do so, head on over to the official download page and grab the “FULL SFX” version. While that’s downloading, navigate to the install location for the classic version of the game, as seen in this screenshot; (eg: Steam\steamapps\common\Duke Nukem 3D\gameroot\classic\).

Once the HRP is downloaded, run the executable and extract the files into a folder (I’d recommend just typing a quick name after the end of the path it provides). With that finished, you’ll want to navigate into the folder with the extracted files and highlight all of them except ‘duke3d’, as seen in this screenshot. At this point, you can simply right-click and “Copy”, or “Cut”, and then head back on over to the game’s install folder as shown in the earlier example and “Paste” them in. If you’re not feeling confident about about your file-handling skills, first backup your entire “classic” folder before dealing with the HRP’s files.

With that all set, simply execute ‘eduke32’. You’ll be greeted to this screen: 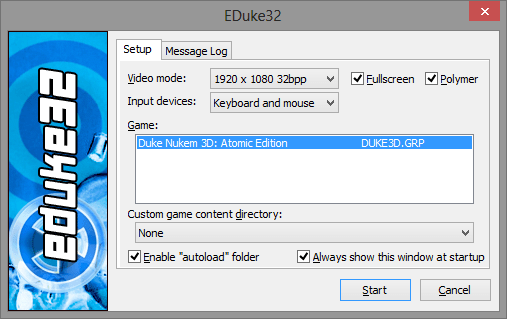 You’ll want to make sure that “Polymer” and “Enable ‘autoload’ folder” are checked, while also selecting the appropriate display resolution from the drop-down. After that, you can simply hit “Start” and enjoy the game in all its high-res glory (thanks to the dedicated fans who’ve made it possible). By default, the in-game graphics options are not configured for the highes settings, so if you have a capable enough PC, you’ll want to hit-up the video section and apply these recommended settings. “Ambient Light Level” is up to you, but the rest assure you’ll be playing with the highest-quality settings. Additionally, you’ll want to experiment with the filtering options on the previous page – I usually stick with Trilinear as I like the smoothing effect it gives.

Whenever a new port of Duke Nukem 3D comes out of the woodwork, the obvious first question to ask is whether or not it’s worth picking up – because let’s face it, it’s not uncommon for fans to own multiple copies already. My answer to this is “maybe”. As usual, this decision depends on a couple of factors.

With the game sourced from other locations, such as the original disks or GOG.com, the HRP pack can mimic quite well the same graphics enhancements the Megaton Edition provides. The benefit here, though, is that this edition includes three add-on packs that are well-worth playing – and can cost $10 per if you find them on eBay or elsewhere. The level of convenience of having them all load right through Steam is high.

Additionally, multiplayer is in the works. That feature alone would tempt me to a purchase. Unfortunately, this isn’t here now, but it’s my hope that it won’t take too long to get here. Heck – I also hope it doesn’t take too long to see the enhanced edition of Shadow Warrior get here, either. It’s almost obscene how excited this duo of games can get me all these years later.

If you’re a Duke Nukem 3D fan and don’t happen to own a current copy, this is well-worth the price-of-admission. Similarly, if you’ve always heard about what a great game it is but never got around to playing it, this is likewise a great way to dive-in. However, if you’re not too concerned with multiplayer, Steam achievements or the add-on packs, the game can be had for $4 less at GOG (it’s worth noting that both services regularly hold sales to drop these prices even further).

If there’s one thing I’m happy to see with this release, it’s that 3D Realms isn’t quite as dead as we once thought it was. We might only be seeing re-releases at the moment, but there’s always the hope that we’ll see something new from the studio at some point in the future.