Following a deluge of leaks, AMD’s 2nd-gen Ryzen ‘Pinnacle Ridge’ CPUs have landed. These new ‘Zen+’ chips are built on a 12nm process, and bring in a brand-new chipset (even though the older chipset will work just fine!). Read on as we take a look at both the 8-core Ryzen 7 2700X, and 6-core Ryzen 5 2600X.

For our rendering tests, we use Autodesk’s 3ds Max (2015, for SPECapc, and 2018, for our real-world model render), the popular open source design suite Blender, as well as Cinebench, POV-Ray, and V-Ray Benchmark for some quick-and-dirty results. 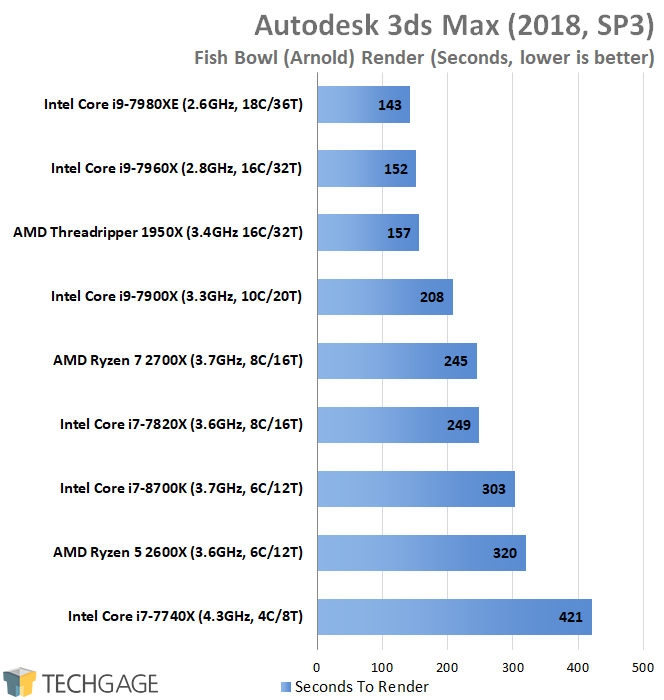 As of the time of writing, Arnold is only available as a CPU renderer, but that’s going to soon change with a revamped plugin that will tackle both CPU and GPU duties. Fortunately, for a CPU review, a GPU renderer doesn’t matter at all, so naturally, we see some very clean scaling with our render here. 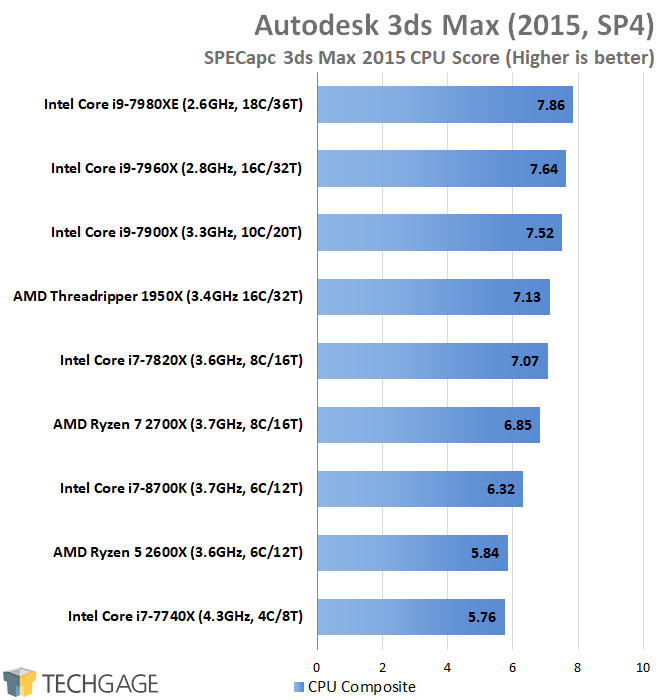 SPEC’s outlook on things paints a similar picture, with almost identical scaling across the board. In both 3ds Max tests, Intel’s lowly quad-core 7740X sits at the bottom, but that’s not a surprise given what it brings to the table. That said, what’s strange about that chip is that it falls so far behind in performance, yet costs generally the same as the new 2700X thanks to the fact it’s destined for the beefy X299 platform. A parallel would be AMD releasing a 1900X Threadripper with 8 cores to match the 1800X or 2700X, but eight cores is actually suitable for power users. 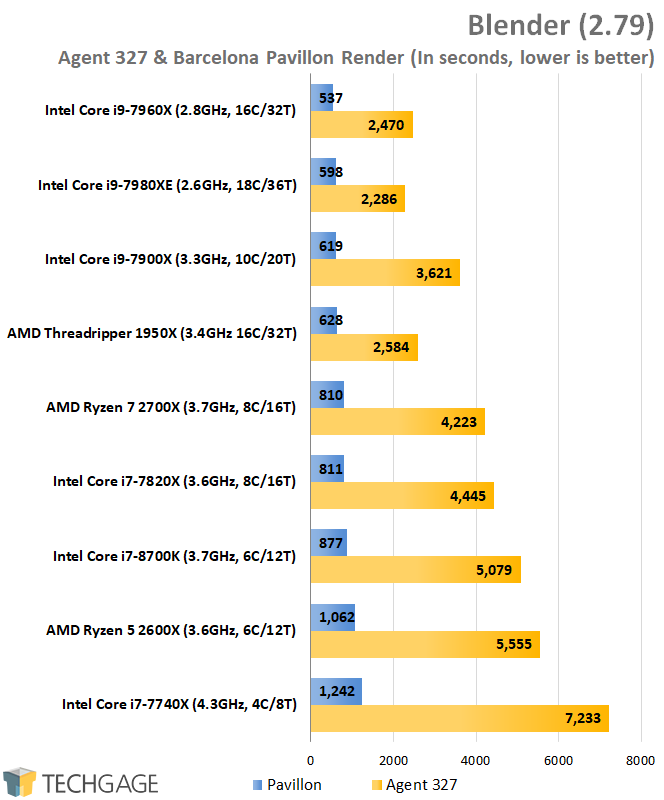 Based on these results, it seems like IPC matters quite a bit with Blender, but additional cores can help tighten the deltas between one chip and another. Nonetheless, in both cases here, AMD’s new 2700X beat out Intel’s six-core 8700K. If you’ve been familiar with Ryzen first-gen performance, this probably won’t surprise you too much. 8 AMD cores are faster than 6 Intel cores. Where Intel will strike back is with its optimizations for things like media, and in many cases, simply with its stronger IPC. 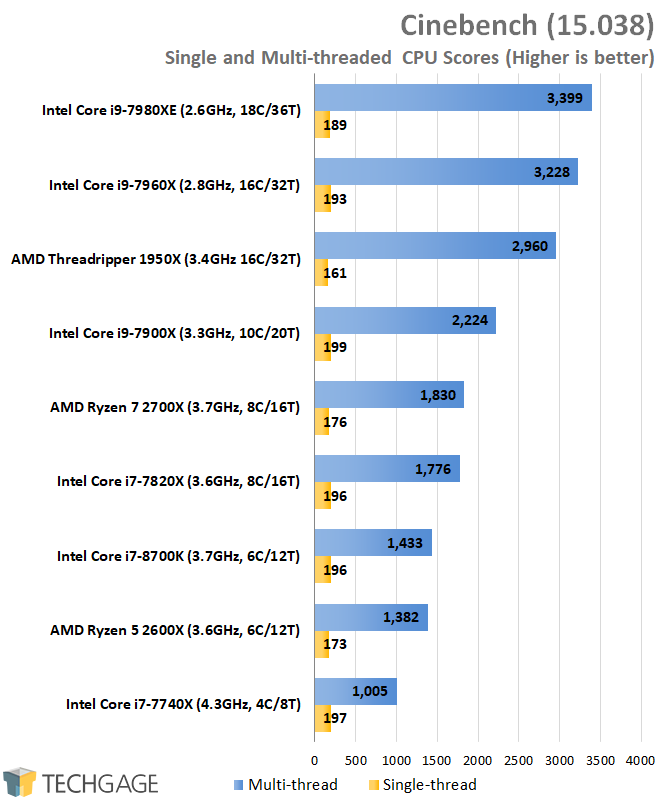 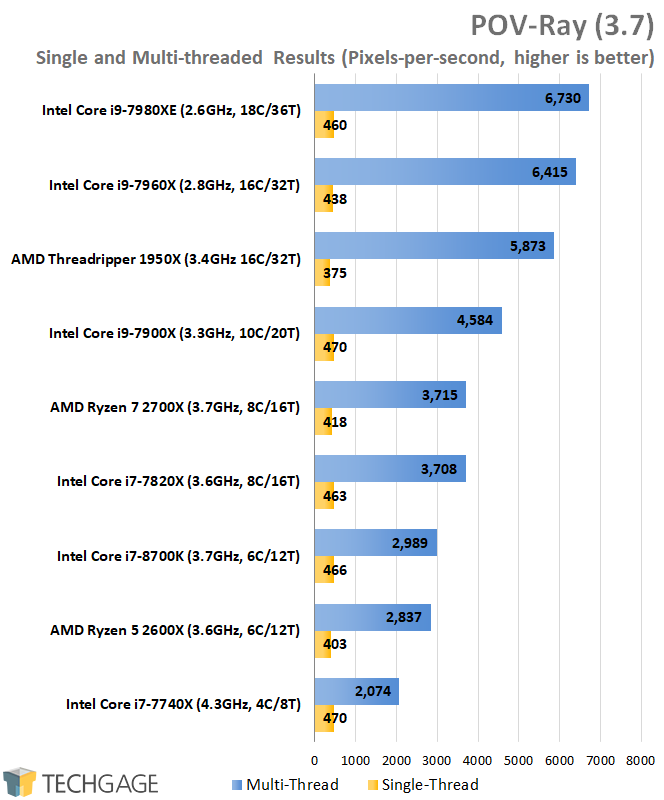 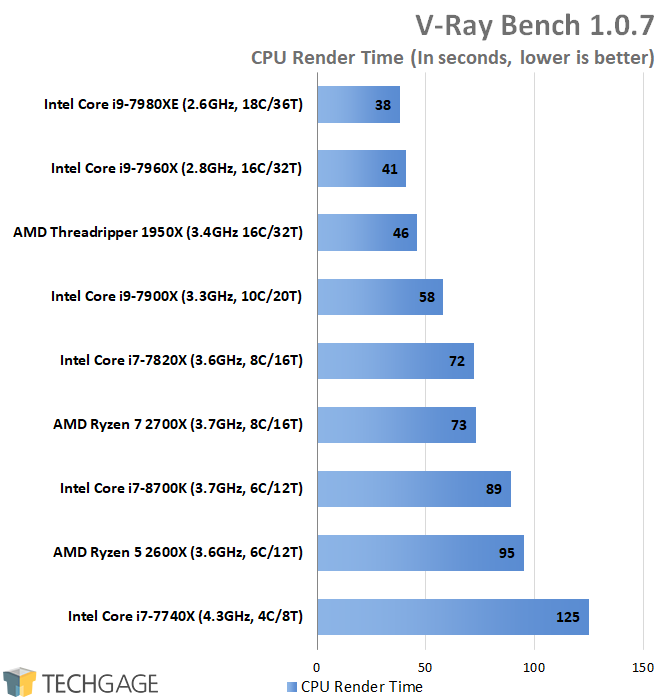 AMD continues to clean house across these synthetic renderers, with the 2700X outperforming the 8700K in every single one. I can honestly say that after spending a lot of time testing the real V-Ray plugin, that the CPU renderer works much better on AMD than the GPU renderer does. This renderer that’s existed since well before AMD was a serious competitor in the market uses the architecture so well, it allows the 2700X to really impress here (not just in V-Ray, but the others, too).

So far, AMD is really dominating at its respective price-points, but we will see a few examples coming up of where that’s not quite the case. Ryzen 2 doesn’t fix every Ryzen 1 wrong, but some of those wrongs are tied directly to optimizations not entirely in AMD’s control. Where raw compute is concerned, AMD delivers an explosive value, and these results prove it.