A Road Trip With The Transcend DrivePro 520 Dashcam

by Robert Tanner on April 27, 2017 in Peripherals, Security

The DrivePro 520 is a full-featured dashcam that has it all. With dual cameras, low light usage, infrared, GPS, mic, and a battery, this cam targets the full range of professional drivers from commercial haulers, passenger carriers, or just business vehicles. It also offers a proper toolkit for parents, so whatever your needs, Transcend’s DrivePro 520 can probably exceed them.

Dashcams are still a foreign concept to most drivers in the US. Many of us have seen the awe-inspiring videos taken by Russian dashcams capturing meteors blazing paths through the atmosphere.

Others have developed a more morbid interest in watching car accident compilations or incidents involving insane drivers, and the proof is flooding YouTube. Yet, despite this, the closest the average North American driver gets to a dashcam is at most a rear-bumper camera solely used for driving in reverse.

Buying a dashcam for one’s own vehicle remains a foreign concept to most drivers on US roadways but the benefits of them are numerous. In accidents where there is a lack of evidence to the contrary and neither party admits responsibility, then police and insurance companies tend to assign fault to the driver whose vehicle impacted the second vehicle.

In an example taken from one case study on dashcams, this trucker was initially found at fault for the accident until police had reviewed the dashcam footage. Hawk-eyed viewers will probably have noticed that moments prior to the accident, two other vehicles had cut the lane in the exact same fashion. Other concerns like the small but continuing trend of insurance fraud, road rage incidents and hit & run drivers, all provide additional reasons to consider a dashcam. 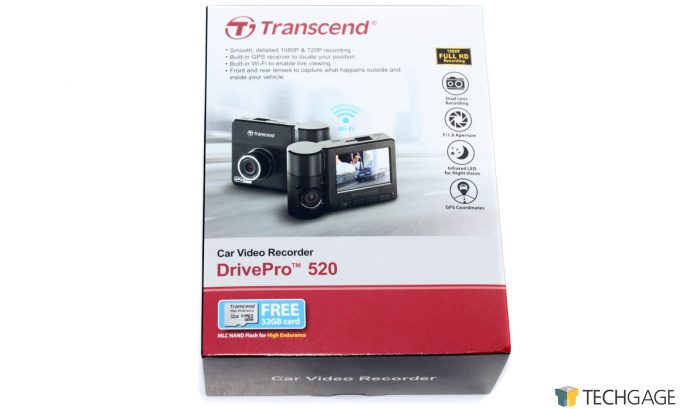 I will preface that when I started undertaking this review, I was no different from the average US consumer, making a dashcam something entirely new for me. The options when selecting which dashcam to buy are far more numerous than I had anticipated, and there are a dizzying number of considerations to take into account. This review will attempt to lay out some groundwork for drivers (and/or relatives of said drivers) interested in selecting from the great many options for dash recorders that have begun cropping up in recent years.

For this review, Transcend kindly offered the DrivePro 520 video recorder, which given its features and price makes it an upper-midrange dashcam. The DP520 comes in two models which differ by mounting kit options; one has a suction mount while the second is a permanent adhesive mounting. The mount itself includes full axis movement, and during use I never had an issue with the suction mount detaching from the windshield. The DP520 is Transcend’s current flagship dashcam out of five other DrivePro models shown by this comparison chart.

The following is a list of considerations to make when shopping for an in-car video recorder:

Most dashcams fall within either the 720p and 1080p range, though resolution alone is no guarantee of image quality, as it comes down to the sensor type, size, and if it is specifically built for low-light conditions. And then there are other factors such as how well the camera handles high dynamic range caused by harsh sun glare and high contrast shadows. If that wasn’t enough, while most theaters still show movies at 24FPS, video recording the cam should at minimum have a 30FPS rating for smooth video.

The DrivePro 520 utilizes an Aptina AR0330 CMOS sensor to drive both cameras, which is rated up to 1296p60 and is optimized for low-light conditions. As the sensor pulls double-duty, the front camera is rated for up to 1080p30 and the swivel mounted camera up to 720p30.

The cheapest dashcams tend to use an excessive FoV to provide the widest range of a vehicle’s interior/exterior, however as the FoV is increased so does the “fisheye” distortion in the video. As dashcams have evolved, most now sidestep this issue entirely by offering a second camera on a swivel mount. The DP520 offers a 130 degree FoV for the front camera and 110 degree on the internal swivel mount camera.

A dashcam with a single front-facing camera isn’t much help if an accident occurs from the side or rear of the vehicle. It also does not provide any proof that the driver was (or was not) paying attention to the roadway at the time of an accident, or if unruly passengers were involved. For these reasons many recorders offer a second camera that includes the vehicle interior and the rear view.

The Transcend DP520 is one such device making it ideal for taxi, Uber, Lyft, or any other passenger vehicle. The second camera offers a 110 FoV, wide enough to include both my ugly mug and a view out the rear window to monitor the vehicle from behind or simply any passengers. It can also be angled instead to show the driver and a view out of the driver-side window, or even swiveled around to face out the front windshield if pulling over for any reason.

Below is a smattering of assorted images in various lighting conditions including facing into the sun, during a rainstorm, and harsh sun glare out of a cloud after the clouds began breaking up.

Next up, further testing, and my overall thoughts.