A Road Trip With The Transcend DrivePro 520 Dashcam

by Robert Tanner on April 27, 2017 in Peripherals, Security

The DrivePro 520 is a full-featured dashcam that has it all. With dual cameras, low light usage, infrared, GPS, mic, and a battery, this cam targets the full range of professional drivers from commercial haulers, passenger carriers, or just business vehicles. It also offers a proper toolkit for parents, so whatever your needs, Transcend’s DrivePro 520 can probably exceed them.

One or both of a dashcam’s cameras may be infrared capable, allowing for proper recording when driving a night. Typically only the interior camera will support infrared recording due to the limited range of the infrared LEDs.

Low-light conditions are the most difficult for any dashcam. The front camera may have the vehicle’s headlights to help, yet will be challenged by the glare from oncoming headlights. An interior camera will have to rely on infrared to be useful.

The DP520’s front 1080p camera provides good low light video, but does start to suffer from image noise when driving far away from the ambient light pollution from major cities. Yet for night time city driving it performs excellent, providing fair quality video as seen below.

The infrared camera provides a very flattering effect for the driver, giving me an excellent ghostly pallor, double-chin and a few extra pounds. The black, demonically possessed gaze is a nice touch.

Personal image aside, the camera provides detail of the driver and any front passengers. Rear passenger detail will be mostly shadows. The camera does fulfill its purpose by providing more than clear evidence of the driver’s state of alertness, eye movements and direction, and any possible driver distractions. Ironically the mic quality is also good enough to trigger YouTube’s music content protection system.

Below are a random sampling of photos taken with both cameras at dusk and nighttime driving conditions. Urban driving was fine, though cross-country driving away from urban light pollution did noticeably increase in the noise in the images.

This falls under the peace-of-mind category. Some cameras offer motion detection and will begin recording at the sign of movement, potentially useful if the vehicle is at risk of vandalism or if somebody sharing the parking lot seems to have frequent trouble parking correctly and you’d like a record of who it is.

I’ve seen arguments that a dashcam could actually increase the risk of vandalism by providing a quick, tempting target for thieves (who would also make off with the footage). On the flipside, Wi-Fi enabled models could stream the footage elsewhere, say to a computer in the back of the trunk.

The second issue with motion detection is how it will negatively impact battery life of the vehicle over time, especially if it is too sensitive. Since the DP520 does not offer motion detection, I could neither test this nor will it be a concern.

The vast majority of dashcams tend to run from a 12V lighter port adapter. Truth be told, this was my largest issue with the DP520 as it meant I could either power the dashcam or charge my phone, but not both. It isn’t an issue for city driving, but during a four-hour road trip with Wayze on my smartphone for navigation, I would have had to eventually unplug the dashcam just to keep the phone running.

While most vehicles are not twenty years old like mine, not all newer vehicles include multiple lighter ports or offer built-in USB ports either. I would have liked to see a USB port built into the 12V adapter itself so that it could provide secondary device charging via USB while the dashcam was in use. Or possibly a USB connector for use with a compatible (or included) adapter as many drivers already have their own cigarette lighter-to-USB adapter.

The Transcend DP520 has a generously long power cord allowing for easy routing to keep the cable out-of-the-way. In my case, under the dash then up the side of the windshield brace, behind the sun visor and then routed down behind the rear view mirror with enough extra cable leftover to probably cover even the largest truck cabs. When researching fellow experiences with the DP520, it wasn’t uncommon to find commercial drivers that had the DP520 professionally installed into the vehicle’s electrical system so it would start with engine ignition.

This one may not seem obvious, but recording duration can be a concern for parents or relatives that want to maintain a long driving history, such as to ensure teenagers are driving safely and at safe speeds. In addition to the vehicle’s current speed, recordings can be marked with GPS coordinates, allowing parents to monitor a vehicle’s location history.

Of course, all this data is lost when the recorder is forced to overwrite old files to make room for new ones. From my experience, a 32GB card allows for exactly three and a half hours of 1080p + 720p recording history when utilizing both cameras. While the documentation implies 32GB is the max supported size, Transcend clarified that the cam will support up to a 128GB capacity microSD card. By rough estimate, a 128GB card should allow for close to 14 hours of video history before the oldest file would have to be overwritten. This can be further extended if either camera is set to lower resolutions.

Transcend includes one of its own high-endurance MLC 32GB SDXC cards with the DP520. In testing it would sustain 20-25MB/s transfer rates when copying data. Due to the high amount of data being written, Transcend recommends users upgrading to a larger card, ensuring that it is MLC-based, which as an SSD enthusiast I can say is pretty sound advice.

It may seem superfluous to offer photo capability in this age of smartphones, but there are some compelling reasons to have the option available. Not everyone has a good camera on their phone, or maybe it was out of power or had simply been forgotten that day. Possibly the smartphone screen could be damaged in an accident making the phone unusable. But whatever the reason it is good to have a dashcam that can quickly be disconnected from the vehicle to photograph or record an accident scene. The DrivePro 520 offers an internal battery that lasts over five minutes, allowing the device to be taken out of the vehicle for snapping photos and video if needed.

The DP520 has a button dedicated for snapshotting photos while driving, taking images from both cameras for separate storage on the microSD card. Snapshots are not overwritten by default and will stay until manually deleted. Unfortunately, while the image quality was very good, I typically would find that license plates were not legible unless stopped immediately behind the other vehicle at an intersection. That being said, the mic quality was surprisingly good, enough so for voices over the radio to be clearly discernible. I suppose if nothing else, one could simply read the plate aloud for future reference when later reviewing video.

As a sort of catch-all, I’ll lump the rest of the features here. The DP520 specifically includes GPS, Wi-Fi, built-in mic, and a G-sensor for auto-detecting and recording an accident. GPS is useful for location and may seem otherwise frivolous, but it is actually a required feature if the dashcam needs to record vehicle speed. Transcend intends the DrivePro family to be international cameras, so as such they support kilometer/miles as well as GPS/GLONASS for navigation.

The G-sensor is offered with three levels of g-force severity for event triggering. When triggered automatically (or manually via a red button) the DP520 will mark the recording(s) for finding later and will not overwrite them. The DP520 also offers a secure Wi-Fi access point, capable of linking with Transcend’s smartphone app. This can provide additional monitoring and file copying to a linked smartphone.

Transcend’s DrivePro 520 is a nifty dashcam that offers excellent image quality during the day, even under harsh sun glare conditions, and good quality at night for ubran driving. Image quality suffers a bit when away from the bright lights of a city, but remains quite usable. The interior camera offers good image quality during the day, though its infrared option is only able to provide image detail on the driver and front passenger; passengers in the back will mostly remain in shadow. Its cigarette adapter may pose an issue for some vehicles if not electing to professionally wire the device directly into the vehicle.

Having a dashcam isn’t without its drawbacks. It isn’t even summer yet but the Texas sun already gets hot enough on some days to risk melting the dashcam if it isn’t protected from direct sunlight. There’s also the risk of someone seeing and wishing to steal the dashcam for a quick buck on eBay. It is possible to use an always-on camera that sends video via Wi-Fi to a hidden device elsewhere in the vehicle to guarantee you capture footage of thieves, but at the end of the day that still won’t bring back a stolen camera or the cost of replacing a window. As such, I frequently found myself stashing the dashcam out of sight when parking if I wasn’t using a sunscreen for the windshield. 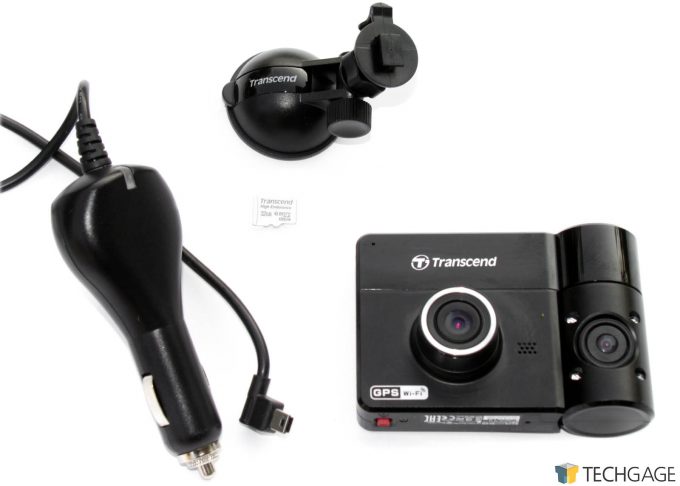 Admittedly, I wasn’t sure at first, but after three months of driving with a dashcam and the risks and hassles involved, I would have to say I  still would wholly recommend one and plan to continue using the DP520. Just having the extra layer of security in place should an unlikely event happen to occur gives a new peace of mind that has taken much of the stress back out of driving. And while not applicable in my case, there are other benefits such as potential insurance rate discounts on the vehicle.

At $190, the DP520 is priced in the upper midrange of dashcams, but as a dual-camera recorder rated for night driving, infrared interior recording, GPS, and vehicle speed monitoring, it offers almost the entire gamut of features. The only thing it doesn’t have is parking or motion detection capability. Given the amount of data a dashcam generates, the inclusion of a high-endurance MLC grade 32GB microSD card does help to offset the higher initial price.

Finally, its menu options provide for a wide range of settings, enabling the DrivePro 520 to work well as a taxi, Uber, or Lyft cam, a tool to completely monitor a fledgling teenage driver, or just a peace of mind for everyday driving. If wishing to spend a little more to invest in a quality dashcam the well-rounded feature set paired with good quality dual-cameras makes the DrivePro 520 an ideal choice for almost any situation.