With a great number of media players available on the market, picking out the right one can be tough. AC Ryan hopes to stand out with its Playon!HD, an option that does a lot more than just play media. It can also act as a NAS, and even handle your torrenting duties. Does it do all of these well enough to be worthy of a purchase?

In the world of digital media, some things are guaranteed winners. When it comes to media players, however, the particular prescription for success is still very much an enigma, leading to a glut of players on the market that – let’s face it – all largely do the same thing, and mostly the same way. I guess that’s why we’re paid the big-bucks (Right, Rob? Errr, Rob? Where are you going?!) – to help you figure out exactly where on the spectrum each one of these fairly identical products lies.

Today’s look is at AC Ryan’s Playon!HD media player, which has been out since a little after the start of the year. The Playon!HD is a full 1080p media player designed to take square aim and center stage against such products as the WD TV. Of course, it’s a little harder to source than some of its competition, due to the company’s supply lines – those of us in the US need to do a bit of searching since it’s not available on the likes of Newegg or in Best Buy. When you do find it, it retails between $139.99 and $159.99.

The device also very happily provides all of these to you through A/V outs of your choosing, including HDMI, Composite, and Y/Pb/Pr Component. For audio, it supports the additional SPDIF coax or Optical TOSLink, which is a nice bonus. 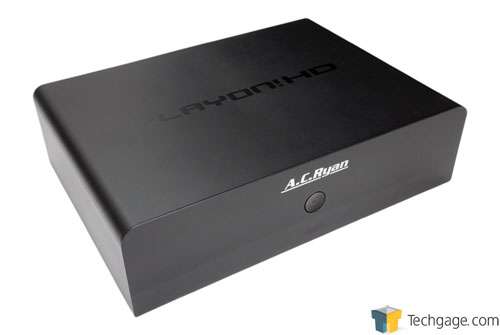 The Playon!HD comes with a 1.5TB drive for all of your media storage. If that’s not enough, however, it can be upgraded with any 3.5″ HDD up to 2TB. Even better than such a large drive being included is the fact that it’s also ready-to-use as a NAS box, meaning other network devices can still have access to your media. Of course, if that’s not enough, it also supports one USB-B device, two more USB-A hard disks or thumb drives and a whole host of memory cards built in, including SD/MMC and Sony’s Memory Stick.

The only real downside to the Playon!HD’s connection options come in its network ability – the built-in wired NIC is only 10/100Mbps, and the Wireless N (which actually is theoretically faster throughput) is actually an optional extra. This is not a wonderful selling point for a device that is proposing to be the media hub of your entire home, and might be worth noting depending on the number of concurrent connections and file sizes.

Finally, it’s worth noting that though the Playon!HD is a very quiet media player, it is not silent or passive – it comes with a 40mm “Low noise” fan. For anyone who’s played with computers for a while, the first thought is probably that 40mm is the opposite of “Low noise.” Though it’s not dead silent, I will say that it didn’t get much louder than the hard drive itself even while playing 1080p video.

One of the places that the Playon!HD really sets itself apart is in its typical AC Ryan polish. The box is kitted with a very snazzy, braided 6′ HDMI cable, a Component Video, Composite Video/Audio, USB-B to USB-A and USB-A male/male pigtail as well. This is literally a cord for every type of port you’re likely to use except for the NIC, and is a very welcome extra. Rounding out the bundle are the remote, a pair of batteries for it and a few extra screws (should you lose any if you mess with the hard disk drive). 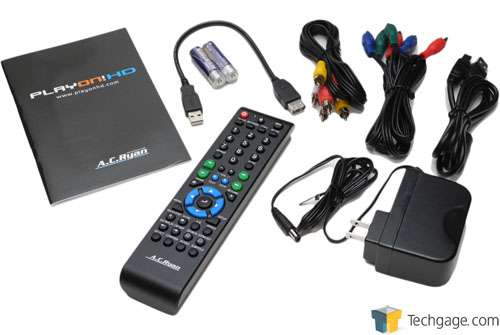 The unit itself is matte black steel across the top and sides, with a gloss black plexi front. Though this front could attract fingerprints and dust, the matte black across the top and sides do a great job of giving you places to hold on to so that this doesn’t happen. All A/V outputs are across the back, and the USB ports and card reader reside on the right side of the device (if it’s facing you). It is, in a word, sturdy. It feels hefty (unlike the WD TV) and like it will remain where you put it. Its looks may not be to everyone’s taste, but it certainly is a lot prettier and more understated than many of its competitors. 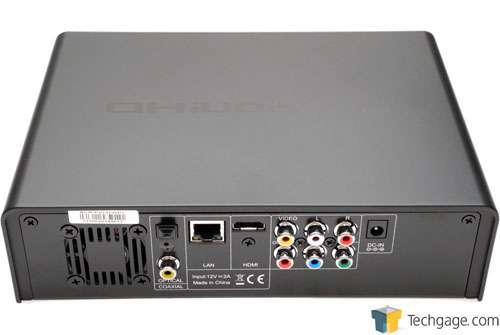 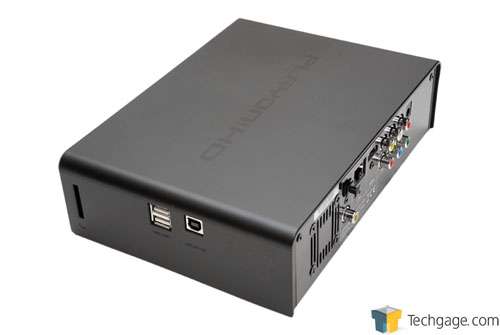 The front fascia is clean but for one power button, which glows blue. Normally, this would be a gripe to me, as I find front-facing LEDs are quite obnoxious in a media appliance. However, AC Ryan has toned it down behind a bit of shaded plexiglas so that it’s not terribly noticeable. This is a very welcome detail, as I’m about tired of media room electronics having garishly bright, eye-bleed level LEDs. Blue ones in particular are famous for this, and are very harsh in an otherwise dimly-lit environment.

Connections are as simple as you’d expect – simply plug it in, press the button on the front and the device will begin its setup procedure. This begins with a quick HDD format, followed by your basic setup questions (Time zone, Network, etc.). It’s worth noting that the devices rarely ship with the newest firmware, and upgrading mine actually provided a totally new “Home” screen layout. Your miles may vary, but it’s definitely worth checking out before you even get much of it set up, to save you some frustration at having to repeat that whole five minutes of your life.