A couple of weeks ago, I published a review of ASUS’ O!Play media player, and I admit that before I unboxed it and hooked it up to my TV, I wasn’t quite sure what the true purpose of the device was. It sure didn’t take long before I became a believer, though, so after the review was posted, I couldn’t help but get a competing product in right away to see what else was out there.

The first model to come to mind was Western Digital’s WD TV, because it’s one I remember having had good reception overall, and as WD tends to take network storage rather seriously, I knew that it had quite a bit of potential. And if there’s one benefit up front that the device has, it’s that it currently comes in four different flavors so that you don’t overpay due to features you might not use.

For a complete feature breakdown and comparison to each model, I recommend heading over to the official WD TV site where it’s explained with the help of a checklist. We received the flagship Live Plus version, which compared to the regular Live version, adds both Netflix compatibility and DVD navigation. If you plan on doing any streaming (online and via LAN) at all, the Live or Live Plus is what to look out for, since the WD TV HD only offers support for external storage.

Like most media players in the ~$100 range, the WD TV Live offers a wide-range of media support:

It’s difficult for a media player to offer “definitive” media support, but the WD TV Live sure doesn’t seem to be skimping out on much. Plus, if there is a format that later becomes popular, the company could add the support in with a firmware update. But as it is, all of the bases seem to be covered.

Aesthetics are nowhere near as important as actual functionality, but even so, people like a clean-looking device that doesn’t detract from the rest of their setup. In the case of the WD TV, there’s nothing to worry about in that regard, as the device is small, and very clean in design. It’s a bit hard to judge the actual size without a comparison, though, so for that, here’s another photo that shows WD’s device sitting on top of the earlier mentioned ASUS O!Play. 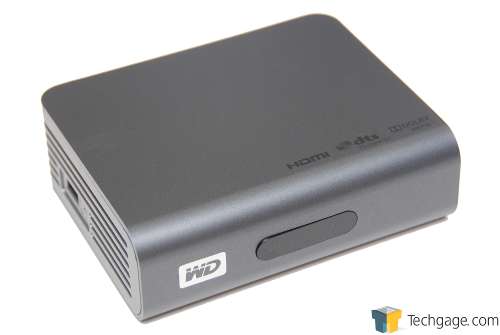 The sides of the device are rather clean, with a lonely single USB port found on the left. 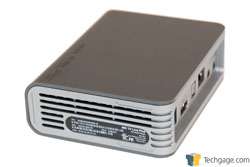 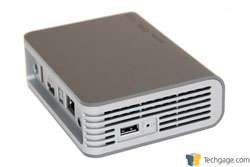 The rest of the connectivity options are found at the back, with another USB port available, along with the power, HDMI, optical audio, LAN, and two ports for the composite and component AV cables. Because this device is so small, WD includes special AV cables that have a 1/8″ jack that plugs into the back here, while the other end of the cable are typical composite and component. This is the first time I’ve seen an implementation like that. 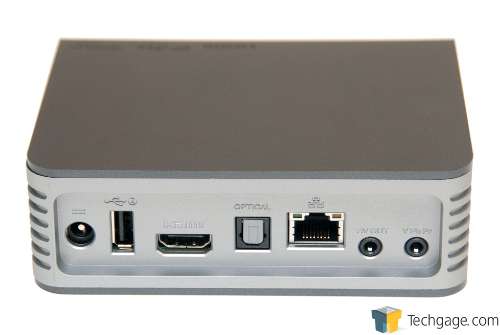 A media player would be useless without a capable remote, and the one that WD bundles with its WD TV is well-suited for the job at hand. But, there’s a potential problem. It’s small (the WD Caviar Green hard drive is for comparison; it’s not included with the WD TV). At first, I hated the fact that it was so small, but on the other side of the coin, I kind of like it. But when the lights are out, the small buttons can be a little troublesome to navigate, and if you have larger fingers, it could prove a chore to use. If anything, I would have loved to have seen backlighting for the buttons, or at least glow-in-the-dark logos. 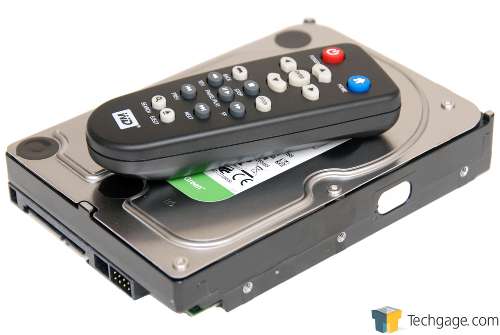 In way of extras, there’s not too much here, although as mentioned earlier, since the composite/component video cables are of a special breed, WD has included them here. Not pictured are the manual and software CD. 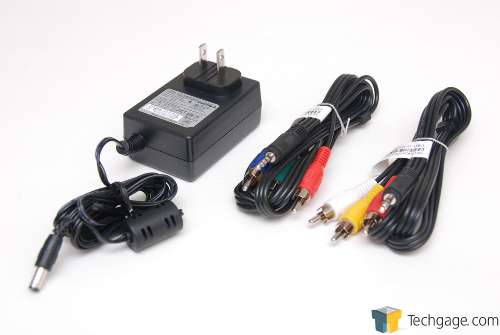 By looks alone, I’d have to give WD props. The device is small, clean-looking, and simple. That’s just how it should be. Next up… setup and testing.