In an article we published last week that took a look at an easy solution to ripping your Blu-ray movies, we mentioned that the HTPC lifestyle is constantly growing, and for good reason. Today, it’s not that expensive to build a modest HTPC capable of becoming a top-rate media streamer, and likewise, storage prices are almost laughable… 2TB for ~$100? Sheesh!

Most often, an HTPC will be situated under or near a television, because until wireless display standards take off, most people are going to be connecting their television straight to it. For others, the idea of building a home server that’s purpose is to stream media also seems tempting, and today, some TV’s do have the ability to connect to a network, even wirelessly.

But if you’re happy with your setup now and don’t find the need to spend more money, there are cheap solutions available that will allow you to stream your media to any television in your house. As long as you have a network, you can get this done rather easily. ASUS’ O!Play is one such device, and will be the first of many like it that we’ll be taking a look at.

“Media Players” such as the O!Play seem to have become a fad, but it’s not surprising. For the most part, they can’t be that expensive to produce, and for the end-user, they’re not that expensive to purchase. But, for that small entry fee, you can essentially bring your media to any room in the house. In the case of the O!Play Air in particular, you can even do this wirelessly.

ASUS currently offers up two different O!Play versions, the HDP-R1, a non-wireless model, and then the HDP-R3 “Air”, which as mentioned, does support wireless (up to 802.11 n). Both of the devices share the exact same functionality, so if you don’t need the wireless, the HDP-R1 will suit you fine. It should also be noted that for those looking to stream the highest-quality 1080p streams might also want to stick with the HDP-R1, but we’ll talk more about this later. 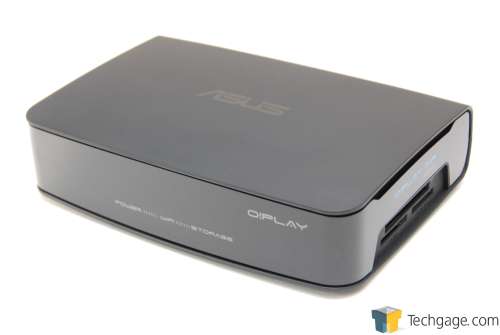 The O!Play doesn’t have built-in storage, or even allow the installation of a hard drive, but it does allow you to plug in various forms of external storage, including eSATA, USB and memory card (CF, SD, MMC, MS and MS Duo). For those who are looking to simply bring their media with them, rather than stream from a central location, this external storage support will be important. If you don’t want to use the O!Play on a network, for example, you could simply copy all of your media to say, a 2TB eSATA drive, then bring it to any TV to plug in and enjoy.

The first time I talked about the O!Play with ASUS was at this year’s CES in January, and at that time, the company told us that the O!Play was -the- most feature-rich media player on the market. Just how true that stands today, I’m unsure, but I do know this… it supports a lot of different media types. Here’s a quick round-up:

If you have a media type not listed here, I’d have to believe that it’s quite a rare format. The O!Play supports common file types such as .AVI, .MP3, .MP4, .MPG and .WMV, and it also supports newer formats such as .MKV, commonly used for high-definition content. Further, it even offers support for .m2ts and .vob, so you’ll be able to play direct rips of your DVDs and Blu-rays without issue.

Here’s something even more interesting. If you have a Blu-ray movie ripped to an ISO, sans copy protection, the O!Play will even handle that, menus and all included. That will be an appreciated feature for those who refuse to lose any quality of their movie, but love the fact that they can stash the cases away and not touch the discs again.

Before we get into the setup and testing, let’s take a tour of the O!Play and see what it’s made of. As you could see in the image at the top of the page, the O!Play is rather clean in design with curved edges and a matte-like finish. The unit is a bit darker in color (it’s a very dark gray) than these pictures portray.

On the right side of the unit are the memory card slots. If you have a digital camera, you could simply haul out the card and pop it in here, and then view your photos on the display connected to the O!Play. 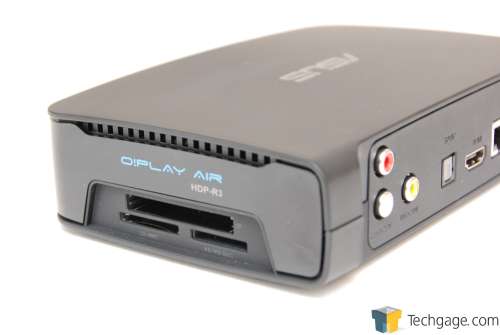 On the opposite side is the eSATA and USB ports, and also a reset button in case anything happens to go screwy down the road. 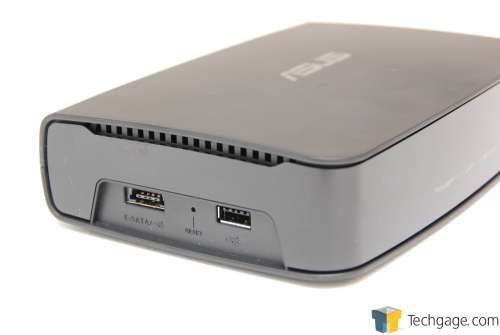 All of the important connectivity options are found at the back, including the LAN (you don’t -have- to be wireless, despite the “Air” name), HDMI, audio S/PDIF and composite. Because the O!Play is designed to play high-definition content, ASUS opted to go with HDMI in lieu of anything else, including DVI. That might be a turn-off to some, but the HDMI choice is understandable. 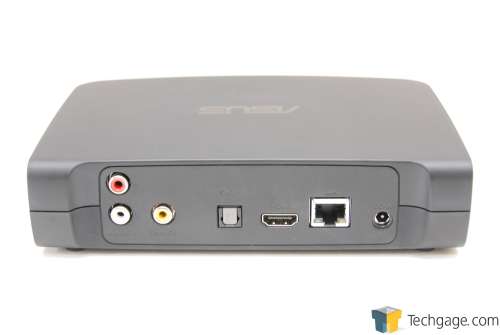 Unfortunately, no HDMI cable is included with the O!Play, but that’s again not much of a surprise since most displays/televisions do include them. For older televisions or to watch standard-definition content, ASUS includes a composite cable. An included CD featuring a manual and O!Play Windows software is not pictured here. 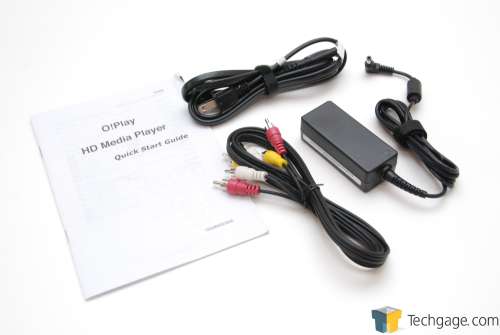 In order to take advantage of the O!Play, a remote control is required, so one is included. Most of the buttons are straight-forward, and overall, it’s simple to use. The large clear button with a musical note inside it is used to begin music playback with random selections from your collections. For perspective of the remote size, here’s another image that compares it to a Blu-ray case. 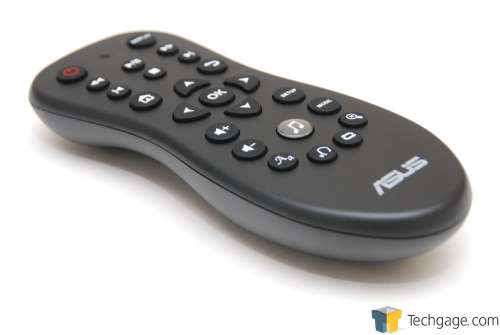 The O!Play kit as a whole is rather simple, but that’s a good thing. After all, the sole purpose is to stream media, so anything more robust could be considered overkill. The only thing the O!Play could include to improve it is the option to add a 2.5″ hard drive for internal storage. ASUS has other media devices that can do this, but none are quite as robust as the O!Play. Perhaps the O!Play 2 will include this option.