Ripping Your Blu-rays the Easy and Free Way

Do you think that getting a Blu-ray movie off of its disc and onto your PC is complicated? It once was an arduous chore, but today, it’s easier and more accessible than ever. We take a look at one of the simplest ways to both rip a movie onto to your PC, and then encode it into a variety of formats. Best part? It will cost you $0.00.

A couple of years ago, many people had little intention of adopting Blu-ray technology, primarily due to its cost-of-entry. Today, that concern is almost gone, as it’s easy to find Blu-ray readers for the PC for as low as $60 online, and stand-alone players for the TV for not much more. Then of course there are the movies themselves. There once was a time when even a re-release of a movie would run you at least $20, but today, Blu-ray’s can be found en masse for $10 and up.

As Blu-ray continues to become more affordable, so do our storage devices. Today, you can deck out your desktop or server with copious amounts of storage with ease, and without breaking the bank. Taking advantage of sales, you can score 2TB hard drives for as low as $100, and regardless of what you’re planning to store, drives like that avail a lot of breathing room.

Thanks to this combined affordability factor, many people are building HTPC’s and home servers like never before, because with a little bit of money, you could truly build the ultimate content-delivery machine. Not to mention, today’s popular media center software solutions can play pretty much any codec under the sun, so all of your media only has to be a click away.

In today’s high-definition age, it’s no doubt the goal of many to rip their Blu-ray movies and get them onto their HTPC for the sake of easy access. Unfortunately, this process has always been a little complicated, which is a stark contrast to DVD’s and audio CD’s, which by today have become a non-issue. Blu-rays are locked down with various protections though, and require many more steps in order to ultimately end up with a single file that can be played on many different media players.

Our goal for this article is to teach you how you can both rip your Blu-ray movies and encode them into a format that’s easier to manage, while retaining the excellent quality that Blu-ray delivers. Please note, though, that as ripping Blu-ray movies involves using applications that bypass protections put in place, such as BD+, AACS and BD-Live, usage of the software mentioned might be in violation of certain laws in your country. If you’re concerned with this, you should investigate this first.

In Blu-ray’s earlier days, ripping the movies from the discs was a complicated process. In fact, it took a couple of years before it became possible at all, with the first such software product to pull it off being SlySoft’s AnyDVD HD. Today, though, there are additional options available, but the easiest-to-use that I’ve come across, and the least-expensive (free) is DVDFab’s HD Decrypter.

In the full-blown version of DVDFab’s Blu-ray to Blu-ray, you can do things such as clone the disc, rip to mobile, compress, save as an ISO, rip only portions of the movie and so forth. Both SlySoft and DVDFab’s flagship applications offer similar functionality, but only DVDFab offers people the free option of simply ripping the disc to the PC verbatim (1:1).

The first step is to of course go and download the application off of the developer’s website, then install it. Depending on your version of Windows, you may have to reboot, but under Windows 7, I didn’t. The first time you load the application up, you’ll see an overview look your various DVDFab licenses. If HD Decrypter is the only tool you have a license (albeit free) for, that’s all that will be available. The other programs listed can still be used from the get-go, but will activate a 30-day trial as they are not free. 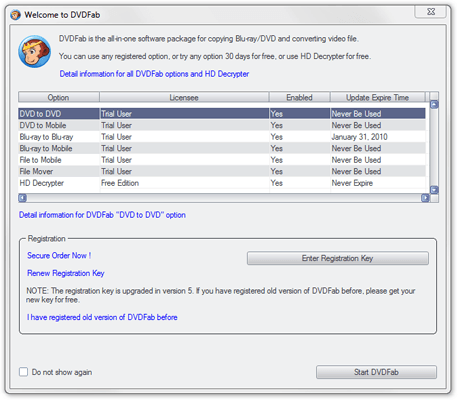 Once loaded, DVDFab will automatically begin reading your Blu-ray movie from its drive, and will load the various bits of information you might need to know. Of most importance will be the amount of drive space it’s going to take up, because with Blu-ray, the 1:1 rips could take upwards of 50GB. In the case of the movie I was ripping here, Donnie Brasco, the completed rip was about 40GB. 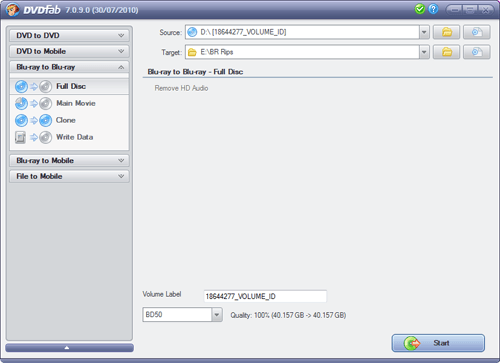 By default, the application will select the same ROM drive for burning, but since this free version of DVDFab only allows copying to the hard drive, you’ll need to browse and search for an output folder. Again, because DVDFab offers a free trial, you could burn directly to another Blu-ray disc immediately after ripping, but since that’s not a free option, and not the focus of this article, I didn’t test it out.

In some cases, DVDFab will allow you to remove the HD audio portion from the disc if you don’t need it, in order to save space, but for some reason, this particular Blu-ray didn’t allow it (most do). From here, hit “Start”, and you’ll quickly be greeted by a pretty status bar: 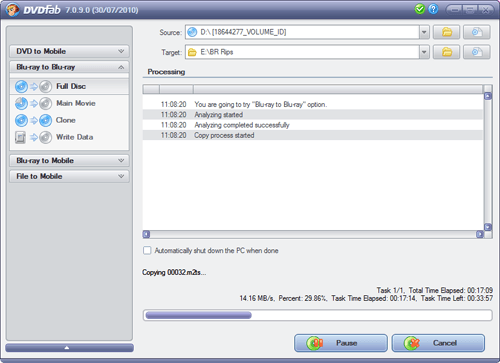 Handling Blu-ray in any way usually requires a bit of patience, and ripping one to your hard drive is certainly not an exception. For me, the average rip took about 45 minutes, but some took upwards of an hour. Depending on your PC’s specs, especially your BD-ROM read speed (mine is 4x), this process may take longer or finish quicker.

If the rip process completed successfully, the program will greet you with that fact: 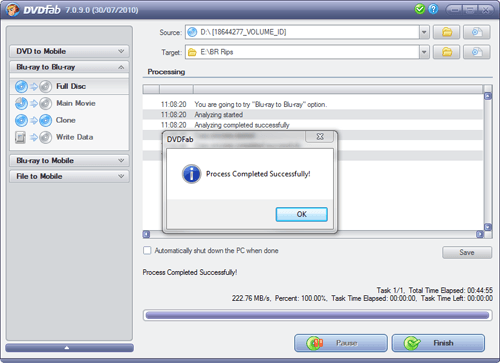 I can’t say for sure if DVDFab will be able to rip 100% of Blu-ray movies out there, but out of the 15 I tested, it processed all of them without issue. That’s not the biggest upside, though, but rather the fact that the entire process was easy. It required nothing more than dropping in a Blu-ray and clicking “Start”.

With our disc ripped to the PC, the next step is to demux it and create a file that’s a bit more manageable – and one that will play in a wide variety of players. Fortunately, the solution to take care of this is again free, and very easy.