Page 1 – Introduction, Backing Up Your PC

One cannot underestimate the importance of thorough, frequent backups. Yet, all too often, I hear horror stories from people who have had subpar backup schemes, or worse still, no backup plan at all. I used to be one of those people, and although I hate to admit it, it took more than one hard drive failure before I got fed up enough to make sure that I never experienced data loss again.

I’ve used a number of backup applications over the years, but something I found was that none stood out from the crowd. If someone asked me for a recommendation, I’d never have one. In the end, the tool I found myself relying on most often was Symantec’s Norton Ghost, both because it was reliable, and allowed full PC backups.

Until last spring, I had figured that Ghost was about as good as it could get, but that was until I took a look at Kingston’s SSDNow M series bundle, a kit that included an SSD and also a piece of software called Acronis True Image. After popping that disc into the drive, I became an instant fan. From that point forward, I moved all of my personal backup needs to Acronis, and kissed Ghost goodbye.

The immediate reasons for me boiled down to ease-of-use and also functionality. Because I use Linux full-time, I was impressed by the fact that True Image detected those respective partitions fine, and going even further, it offered me the ability to backup my entire PC, Linux installation included. That’s something Norton couldn’t do. This was just the beginning, though, as the more I used True Image, the more I liked it.

Acronis touts True Image Home as being the “Backup Solution for Everyone”, so it can be assumed that for the vast majority of home users, any sort of backup functionality you’ll need is going to be here. While the main feature that many are going to use is the one that allows you to keep backups of your entire PC, True Image can do a lot more than that.

A couple of the program’s bullet-points include the ability to clone a hard drive, backup individual files and folders, create a Virtual Hard Disk (VHD) version of your OS install for use in a virtual machine (and vice versa), install potentially unsafe software while retaining the ability to backtrack, boot straight to an image, clean and shred files and more. 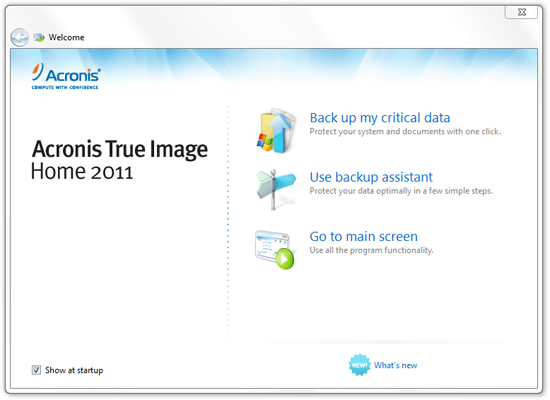 Because True Image Home has many features, we aren’t able to take a look at all of them here. Instead, we’re going to tackle the more common aspects of the program, while also talking a bit about some of the minor features that are still well worth mentioning.

To see all of the features that the program offers, including the ones we don’t cover here, I recommend heading here. If you happen to be a True Image Home user already, but are using an outdated version, you can see what’s new with the recent versions here.

Backing Up Your PC

When the program is launched for the first time, you’ll be greeted with the simplified screen shown above, but after clicking “Go to main screen”, you will see something similar to the shot below. Here, there is quick access to a couple of the program’s most common backup tools, and also an up-to-date list of backups stored on your PC. 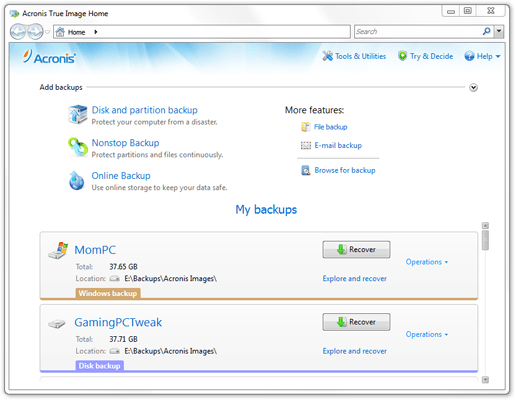 A list of backups will of course be non-existent if you’ve never created one with Acronis before, but since I’ve been using the program for some time, I have a decent collection built up. True Image is what I rely on to help us restore OS images to our benchmarking PCs quickly and easily. The “GamingPCTweak” you see in the screenshot above refers to our GPU benchmarking machine image, with all of our Windows tweaks applied.

The “Disk and partition backup” is the option to choose in order to create a backup of your entire PC, and after launching, you’ll see a screen like this: 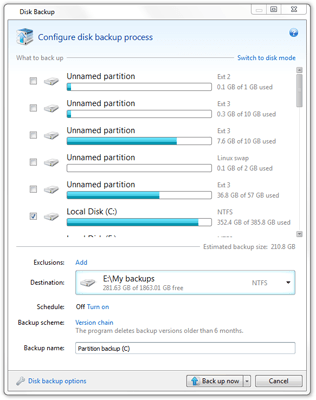 All of the hard drives and partitions available to your PC will be found in this list, and by default, the C: drive will be automatically selected. If you want to keep regular backups of other partitions, you can select them from the list. As you can see, because I also have Linux installed as another OS, the partitions for that are also found here. In order to back up Linux partitions, though, you need to back up the drive as a whole, not with individual partitions.

It’d be easy enough to click “Back up now” and be happy, but there is a lot of tweaking that can be – and should be – done. The first thing to pay attention to is where the backup is going to be stored. In my case, Acronis chose the hard drive with the most free space (yes, it looks like I’m due for another HDD addition soon).

Local hard drives aren’t the only option here. If you choose to browse for a location, you will have the ability to save to another device on the network, such as a home server or a NAS box, and also to an FTP server. Personally, I keep two copies of each backup, one on a NAS, and one on a local drive for the sake of added redundancy.