What’s this? An SSD-related article on Techgage? Yup, it’s true. To be honest, we’ve been a little behind the curve here, even though we’ve been using SSD-equipped machines for our testing for quite a while. You can expect to see more SSD talk on our site in the near-future though, as we begin to roll out more storage content, some of which will be using our newly-revised testing methodologies.

The product we’re taking a look at today won’t be taken a look at from a performance-perspective. As Kingston’s SSDNow M series is based on Intel’s already-proven X25-M, there’s no need to go through the performance details once again. When Intel launched the X25-M just last fall, it took the tech world by storm, because as we saw, they proved that MLC-based chips weren’t worthless. Not by a long-shot.

So, what’s the purpose of this article if not for performance? The benefits of SSDs by now are well-known, and as I mentioned, so is the performance for this particular drive. Thanks to this, and also dropping prices, more and more people are looking to jump onto the SSD bandwagon, and it’s a great thing. The faster the adoption, the sooner the drives will plummet in price and grow in size.

For those curious about the benefits of a solid-state disk, there’s a few to point out. The first and most important (to enthusiasts) is simply the performance. Mechanical hard drives are currently the largest bottleneck in any machine, as was proven by Samsung’s lab monkeys just a few months ago. We may have lots of memory and a blazing-fast processor, but if we’re dealing with copying a large folder from one place to another, or loading up our favorite game, we’re going to be at the mercy of our hard drive.

SSDs do well to lessen the bottleneck by increasing throughput performance and decreasing latency, because rather than having a needle seek data on one of the multiple platters on a hard disk, reading from something like a flash chip with no moving parts is virtually instantaneous. What this means to you is faster-loading applications, faster game level loads and far less lag when pummeling the I/O with your various needs.

Past performance, solid-state disks are small, fitting into a 2.5″ form-factor. That’s small enough to fit inside any notebook that has an S-ATA interface, and means that you’ll have far better airflow around the hard drive area inside your PC. And since there are no moving parts, the drives are 100% silent… another huge plus. There are a few downsides too of course, but those have to do with pricing and densities, both of which are constantly improving.

If you’re a long-time reader of Techgage, chances are good that you don’t mind reformatting your PC. Many of you likely do it on a regular basis, simply to have that “fresh PC” feeling (ahh, few things are as pleasing). For you, upgrading to an SSD likely wouldn’t a big deal. If you’re planning on a fresh install of your preferred OS, then it’s not going to be much of a problem.

But Kingston wants to cater to those who aren’t interested in reformatting their PC, but still want the benefits that an SSD can bring to the table. For those, the company has recently released what they call the “SSDNow M Series Bundle”, although I think a proper substitute for “Bundle” would be “Upgrade Kit”, because that’s just what it is.

As you can see below, there’s a lot more that comes with this SSD than simply the drive itself. Since this is an upgrade kit, the essential cables are included, such as a S-ATA and power connector, and also brackets used to install the SSD into a regular 3.5″ compartment inside your PC. You’d first secure a bracket to each side of the SSD, then slide in the new device and secure as normal. 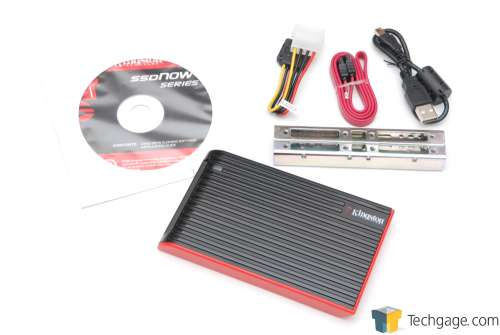 While the aforementioned solution above is for those who are upgrading an SSD on their desktop PC, for notebook users there’s an included 2.5″ external drive enclosure. So with this one kit, both 3.5″ and 2.5″ drives are supported for upgrading, a nice plus. Regardless of which method you’ll be going with, the overall process will be exactly the same.

And of course, the star of the show, Kingston’s “Intel” SSDNow M: 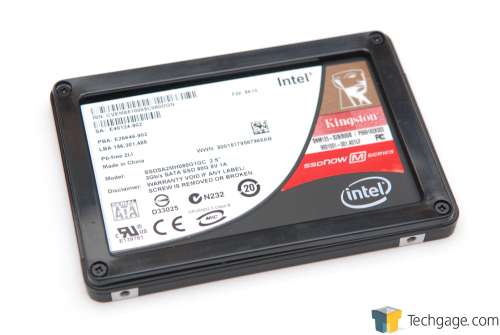 We’ve about covered all there is to know about the product before putting it to good use, so on the following page we’ll discuss both the pre-requisites to getting things up and running, and also a few limitations.