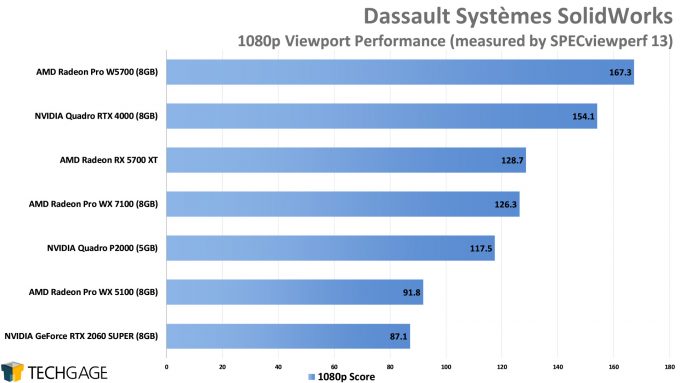 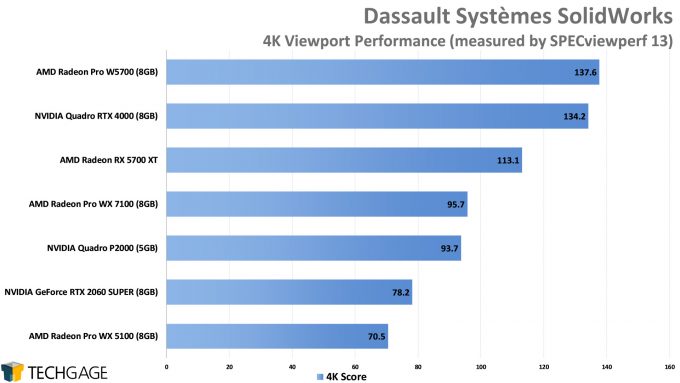 We begin our look at viewport performance with SolidWorks, an application that makes it obvious that gaming GPUs are second-rate. In real use, gaming GPUs are going to fare well enough, as long as the GPU you’re talking about is at least mid-range. Performance in SolidWorks isn’t crippled for gaming GPUs like it is in some others, but for the heaviest of projects, a pro card like the W5700 should definitely be emphasized.

It’s worth noting that SolidWorks also offers an advanced shading mode, RealView, which is exclusive to workstation graphics cards. We don’t have persistent access to a SolidWorks license, or else we would have included a look at its performance here. You can see RealView comparisons from our RTX 4000 review. 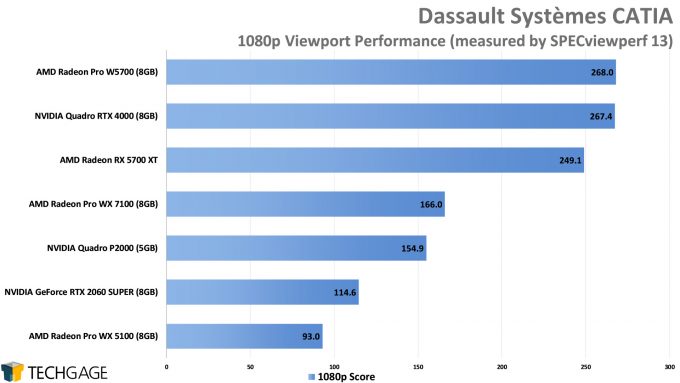 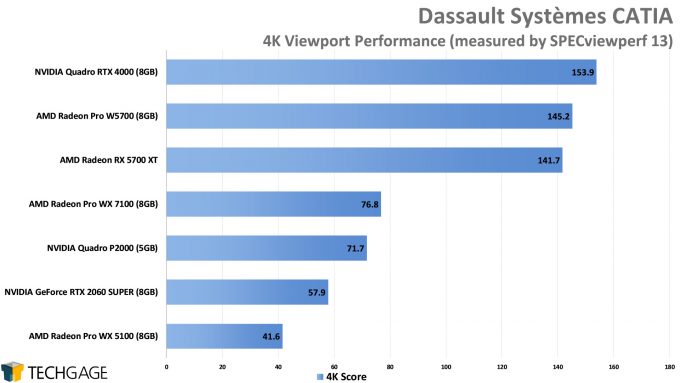 AMD gave NVIDIA a hard fight in SolidWorks with its W5700, and that scuffle has carried onto CATIA. Both the W5700 and RTX 4000 wound up with matched performance at 1080p, but at 4K, NVIDIA inched ahead. Since there’s not too much to talk about here, it might be worth highlighting the fact that (while gaming GPUs are not suggested for critical workloads,) AMD’s gaming GPUs perform a lot better than NVIDIA’s. The RTX 4000 absolutely trounces the RTX 2060 SUPER, but the W5700 only modestly beats RX 5700 XT in both SolidWorks and CATIA. 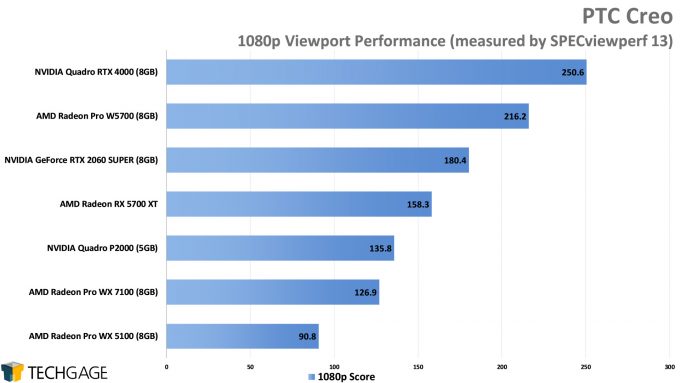 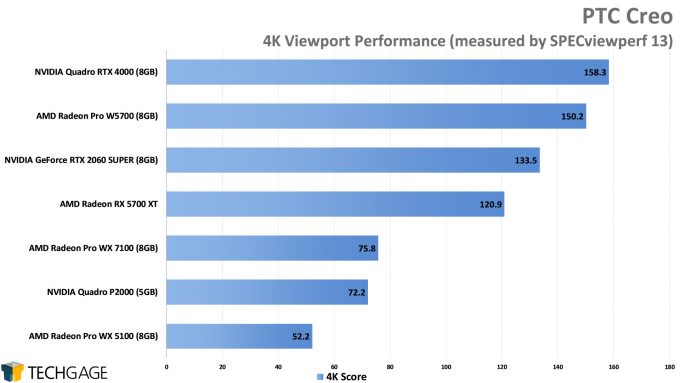 As we like to say, it pays to know your workload, and this page proves why there’s sense to that. AMD’s W5700 topped out the CATIA and SolidWorks results overall, but the RTX 4000 has struck back in Creo. 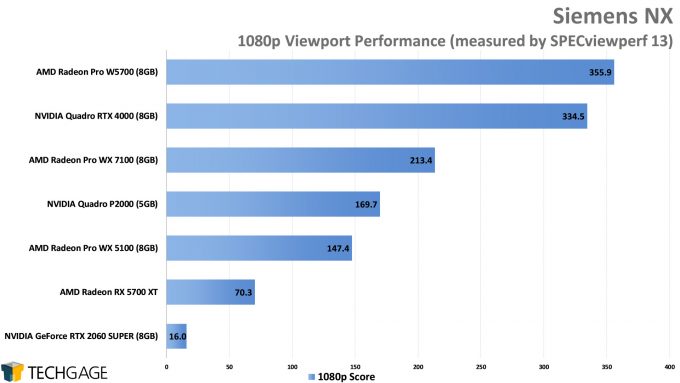 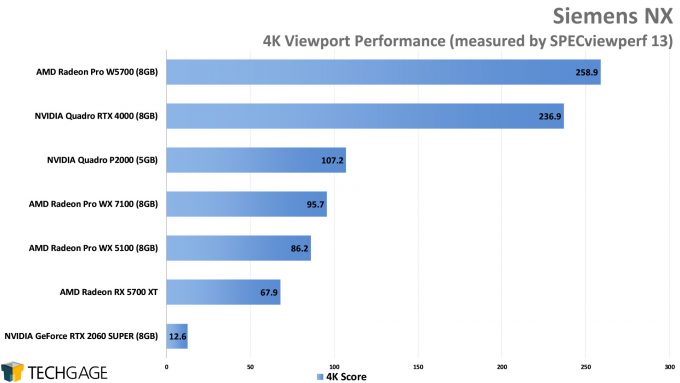 How fun are these graphs? The vendors of all of the software on this page (aside from Blender) would recommend using a workstation graphics card over a gaming one, but Siemens has made it clear that gaming GPUs are pure scum. In terms of these scores, NVIDIA’s workstation GPUs perform about 20x better than its gaming GPUs, while AMD’s is a much more modest 5x – which, to be clear, is still awful.

Overall, both the RTX 4000 and W5700 perform similarly, with AMD getting the edge in both resolutions. 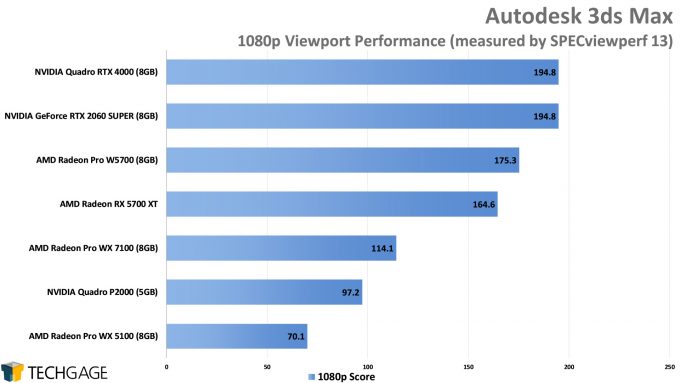 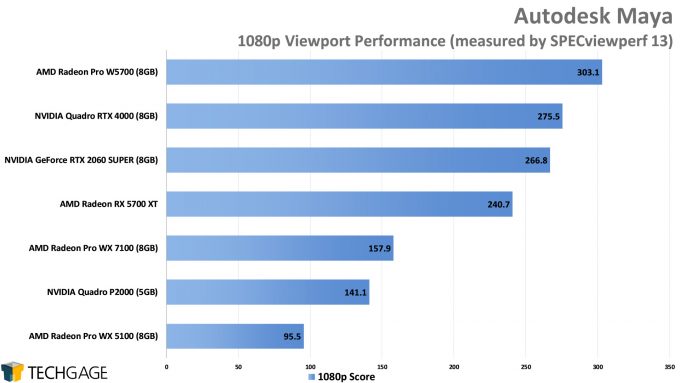 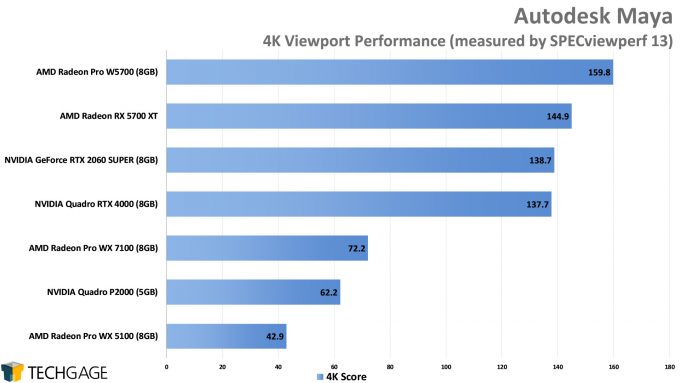 3ds Max and Maya are often grouped together, but both applications perform a bit differently. NVIDIA’s top two GPUs here share the top in the 3ds Max test (which doesn’t have a 4K version in SPECviewperf), while AMD’s Radeon Pro W5700 managed to overtake the technically quicker RX 5700 XT.

In Maya, AMD’s W5700 keeps glued to the top, delivering a really impressive showing overall. At 4K, even the RX 5700 XT managed to beat out both of NVIDIA’s top cards tested here. 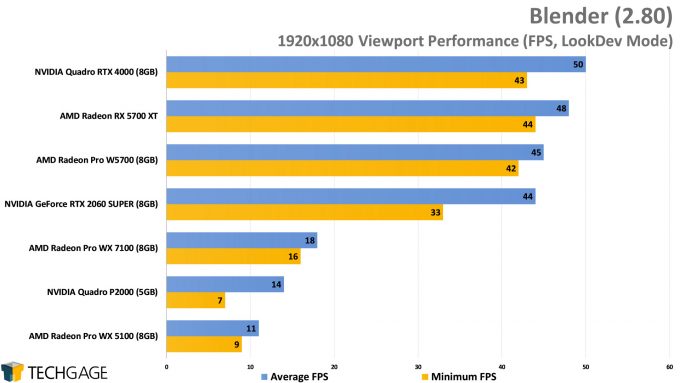 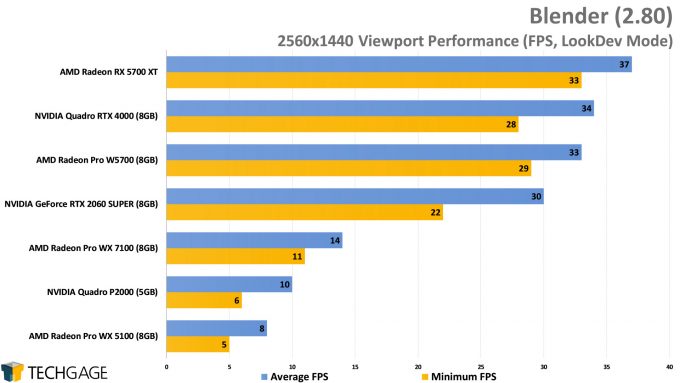 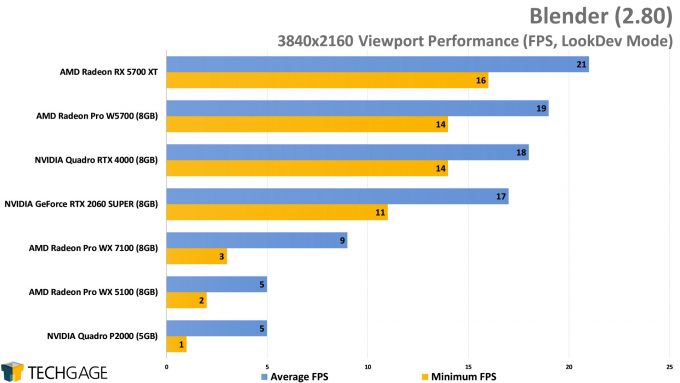 Blender 2.80’s LookDev mode is meant to allow users to get quick feedback on how their scene is coming along, without having the need to wait on an actual render. The computation is high in this mode, and that means the frame rates in the viewport will tank. You won’t design with this mode on, but you will definitely want to pan around while in it, so the more fluid it is, the better.

As these result show, it takes a mighty GPU to deliver quality performance at higher resolutions. 4K isn’t entirely realistic on even the top-end GPUs here. We don’t need gaming-level performance, but 30 FPS is a lot better than 20. You can check this screenshot to see how much of the UI is filled with viewport for these tests.

AMD’s RX 5700 XT has proven to be a really powerful GPU in this test, with the RTX 4000 and W5700 not falling far behind it. Perhaps the most clear point of all is that GPUs like the P2000 and WX 7100 are going to offer pretty painful performance overall. These results will become a lot more interesting as we get more GPUs tested for an upcoming general ProViz performance look.