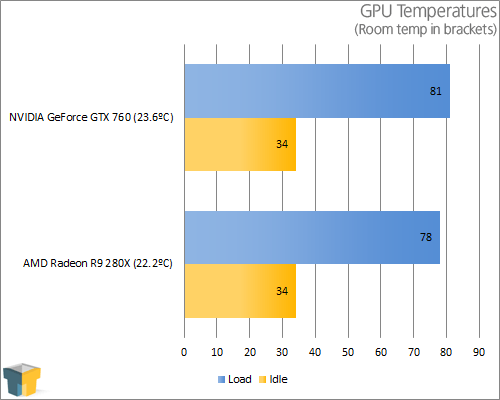 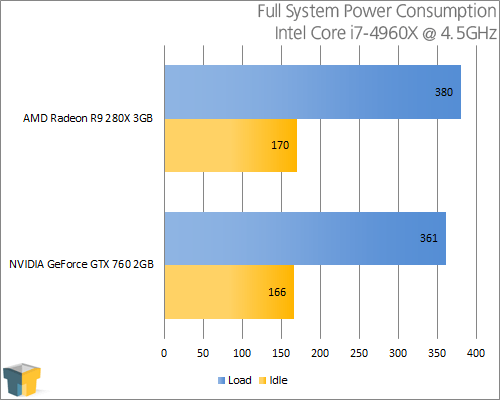 On the temperatures front, both GPUs might as well be considered equals. It’s worth noting though that NVIDIA’s card utilized a reference cooler, which typically don’t perform as well as those found on vendor cards. AMD’s card, by contrast, utilizes a much more efficient-looking cooler (seen below). Given this, it seems we might be able to say that AMD’s GPU runs hotter than NVIDIA’s, but it’s hard to settle on that until we get other cards in to test. 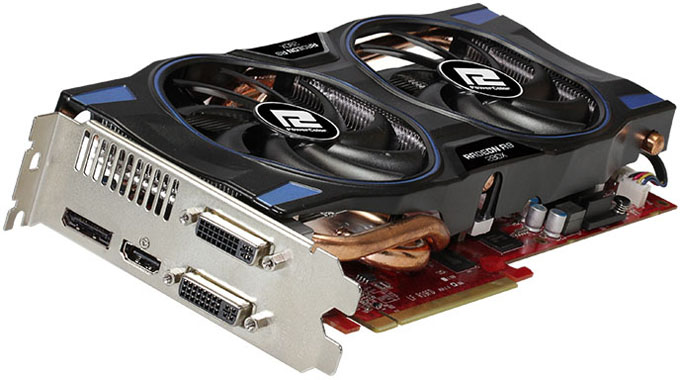 Where power draw is concerned, both cards idle about the same, but AMD’s is a little more power hungry at full-tilt – hardly a suprise given the 10~30% gain in performance.

It’s a little unfortunate that I was unable to include the R9 270X and R7 260X in this article, because it’d be easier to get a grasp on the entire lineup. Alas, the fact that I had just revised our GPU test suite and decided to test 4 different resolutions sure didn’t help with the time factor. Nor did the fact that I received the cards on Friday. Such is the life sometimes, living in Canada, behind seemingly the world’s worst delivery services.

That said, I am glad we started-off with the R9 280X, because it’s quite a good product. At the moment, NVIDIA’s GeForce GTX 760 retails for $250; AMD’s Radeon R9 280X retails for $300. AMD’s card in every single one of our tests surpassed the performance of NVIDIA’s card by at least 10% – the average was 20%, matching the scaling in pricing. I’m confident in saying that given the performance of both cards, the 280X is priced right. 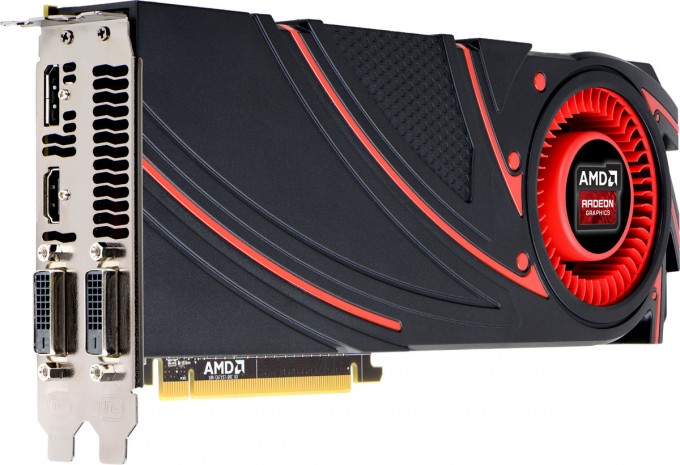 The unfortunate thing about the R9 280X – alright, the entire lineup underneath the 290 – is that it’s based on last year’s silicon. The R9 280X is in effect an HD 7970 GHz Edition. That makes things a little boring here, outside of pricing. While it’s not too uncommon to see GPU vendors rehash a silicon across a generation, it’s not common to see it affect almost the entire lineup.

That said, it’s going to be pricing that makes these cards most interesting. As mentioned above, the pricing of the R9 280X makes it quite attractive compared to the GTX 760, and the only option NVIDIA has to beat out the 280X is the +$100 GTX 770. Simply put, AMD knew it had to keep price-competitive, and at least with the R9 280X, it certainly has. Even on the power consumption front, AMD does quite well, so I have nary a real complaint.

Should you jump on the R9 280X right this moment? It’s not a bad idea, but a better one at this point in time might be to keep an eye out for deals on the HD 7000 series which are inevitably going to plummet in price to be cleared out. It’s also worth noting that AMD’s latest GPUs do not qualify for its Never Settle promotion (a major downer, if you ask me), so there are some definite trade-offs here.

It’ll be interesting to see how NVIDIA counteracts AMD here, because at least on the 280X front, the GTX 760 no longer looks like a homerun card. NVIDIA does have price-scaling on its side, however.