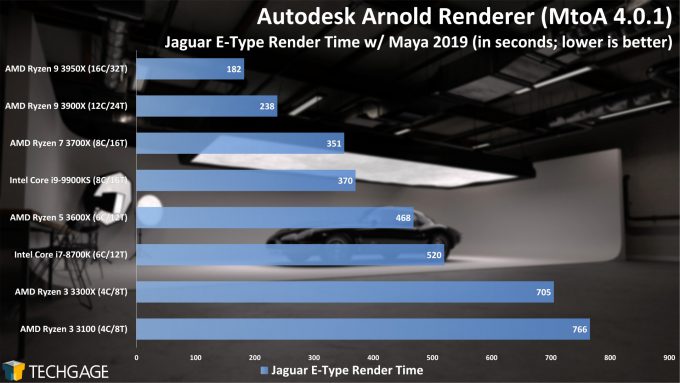 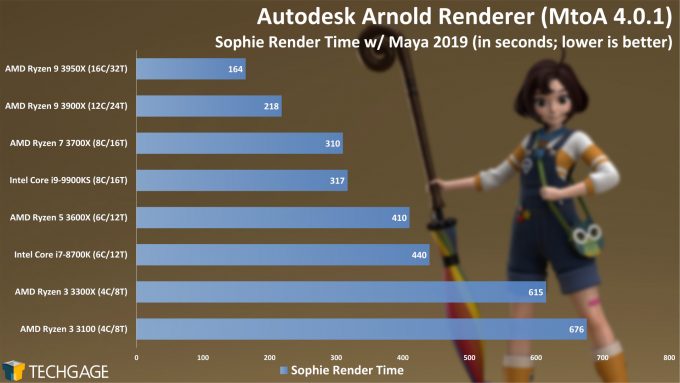 For our first rendering test, we get quick proof that low-end CPUs are not going to get the job done too quickly. Yet again, we’d never suggest focusing only on the CPU for rendering, since more and more heterogeneous (or NVIDIA OptiX) options are popping up. Arnold in particular supports CUDA-equipped GPUs, which uses OptiX by default. 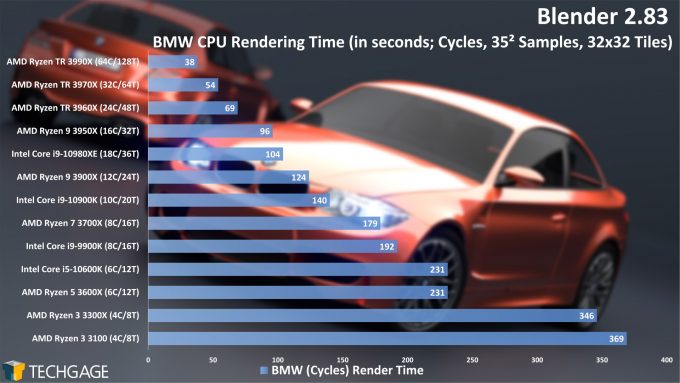 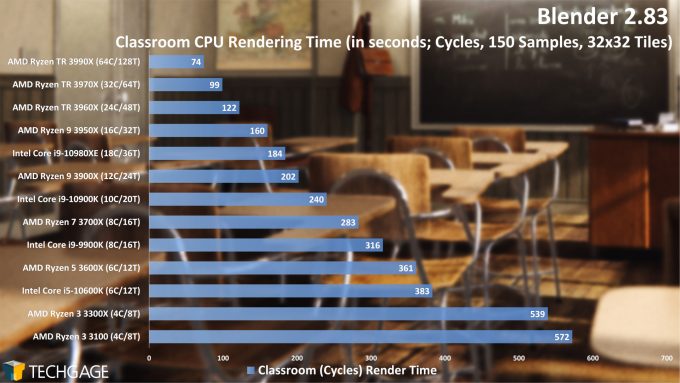 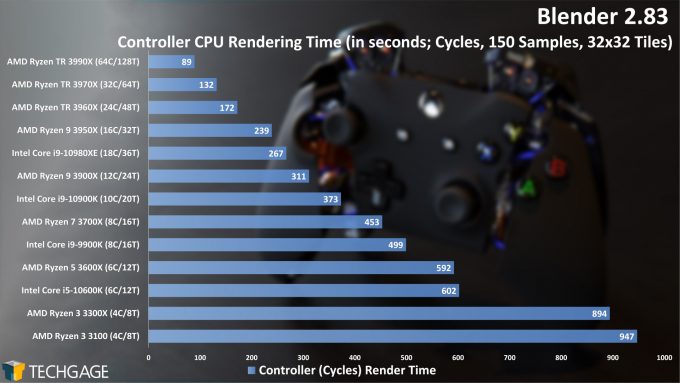 These Blender results might stand out due to the fact that there are many more CPU models involved than in the other tests (including dual Intel 10th-gen). That’s because this performance was pulled from our recent in-depth look at Blender 2.83. We’d suggest checking that out for a lot more information, including tile size considerations and viewport performance.

AMD’s two new Ryzen 3s not surprisingly fall to the bottom of this pile, but that’s again helped by the fact that they are effectively the lowest-end of the bunch. While a chip like the six-core Ryzen 5 3600X costs about twice as much as the 3300X, it’s clear that those extra cores open up a lot more breathing room.

What happens when a GPU is added in? 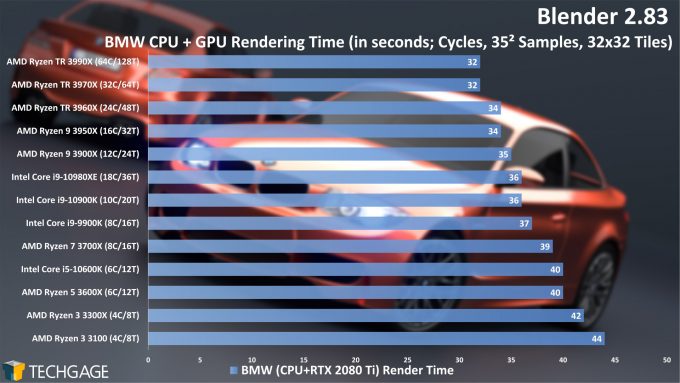 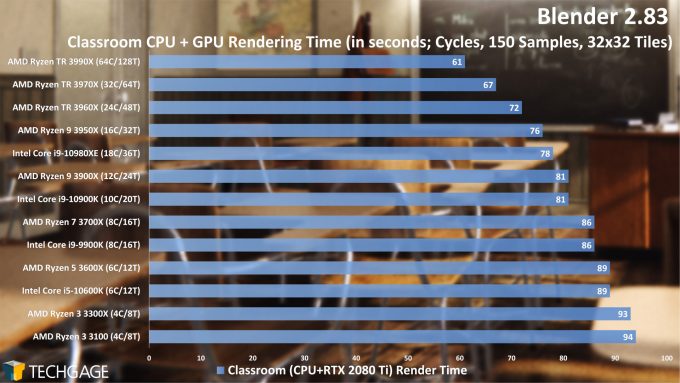 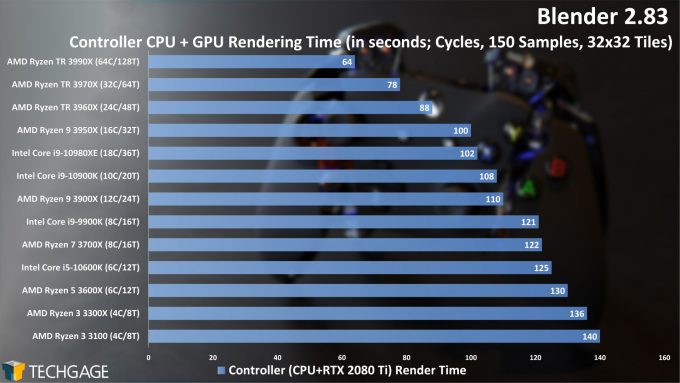 Performance scaling changes a lot with heterogeneous rendering, in some cases making the CPU choice matter far less than a GPU one. That said, as always, you don’t want to skimp on a CPU, because if you’re trying to get creative work done, you don’t want to force yourself to straddle the line of acceptable performance like this. Blender is very unlikely to be the only tool you’re running, and once you start loading up multiple tools or general software, extra cores is going to deliver a better experience. 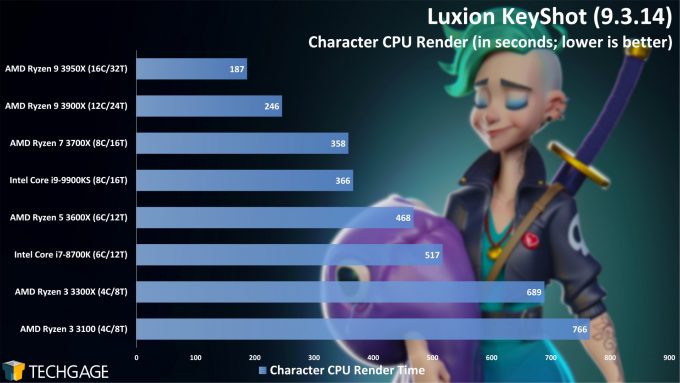 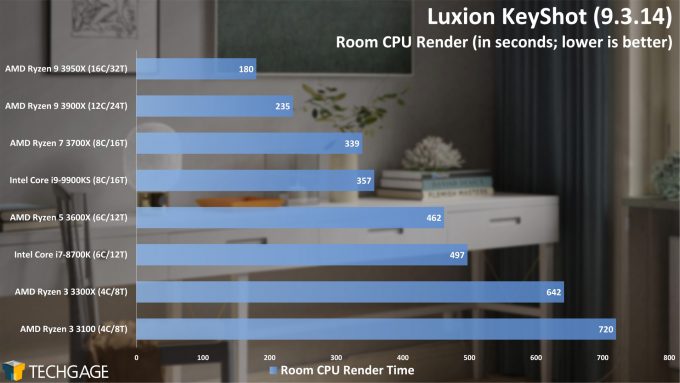 As we discovered in our in-depth look at KeyShot 9 back in January, we noticed that most of our CPU projects scaled identically across-the-board, and as it happens, we don’t see a great deal of deviation with these two chosen projects in our latest testing. Overall, everything scales here according to our expectations.

It’s worth noting that KeyShot is another solution that has gained NVIDIA GPU rendering support, and in many cases, that could improve your overall rendering speed quite a bit. That said, we’ve found in our testing that 8GB graphics cards need to be considered the starting-point for KeyShot, and you may have to make some changes to your scene to have it render properly. Thankfully, all you have to do is click the GPU mode in KeyShot and get immediate feedback. 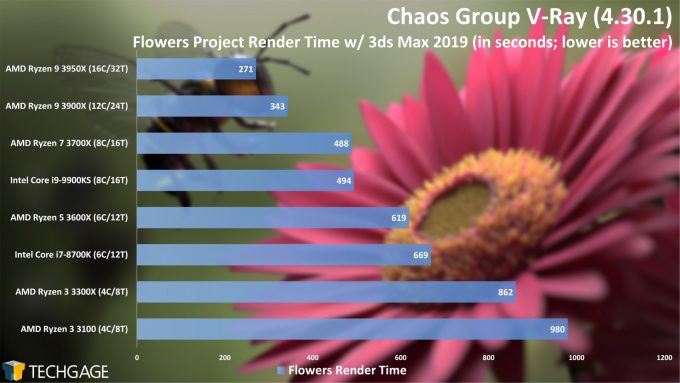 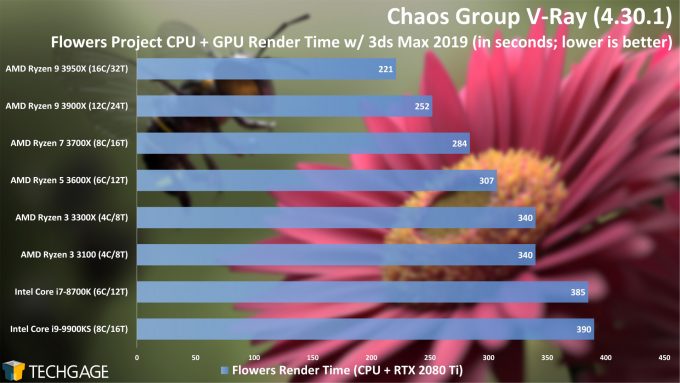 The CPU set of results scales as we’d expect, but the CPU + GPU results shake things up. At first, we believed something was wrong with our Intel results, but based on previous testing, scaling between models remains similar. For some reason, Intel’s chips just struggle here, to the point that the 8-core falls behind the 6-core. We’re not sure why this is the case, but this is one downside of only having one project to test with.

Things do change up for Intel with the standalone benchmark: 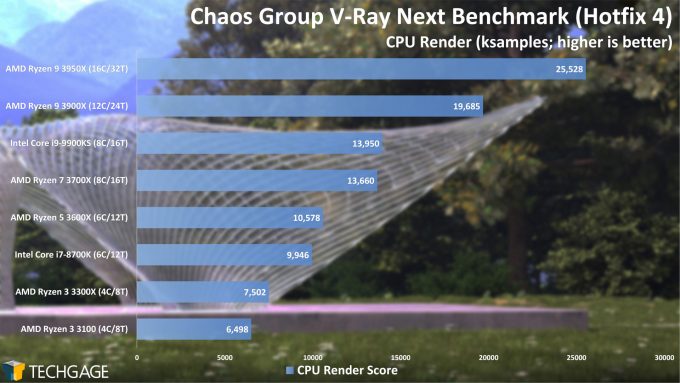 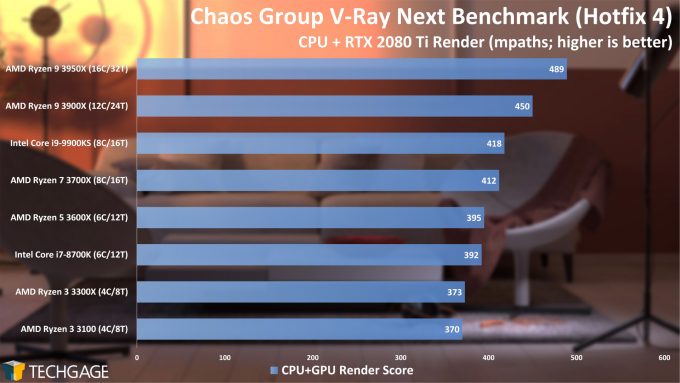 Now this is more like the scaling we’d expect to see. Because V-Ray gives you the option to render to both the CPU and GPU, both processors could be weighed heavily into your considerations. That said, the above performance ignores performance with NVIDIA OptiX, something we’ll have a fair bit of data to present for soon.