After poring over the results from our Windows and Linux testing, there’s a lot to cover with the $3,990 3990X. As mentioned in the intro, we can’t be more clear about the fact that this CPU is not for everyone. There’s always someone with deep pockets who simply purchases the biggest components they can buy, but doing that with this chip means that you may be detrimentally impacting the workloads that are actually important to you.

This is not a chip for gamers, that much should be clear. Smaller CPUs with higher clock speeds will be much more ideal for that use. For gamers who also create, the Ryzen 3900X or 3950X would make for great choices. Intel’s CPUs still have strengths over AMD in places, but we’ve posted close to 80 performance charts, so hopefully one of them will help steer you in the right direction. 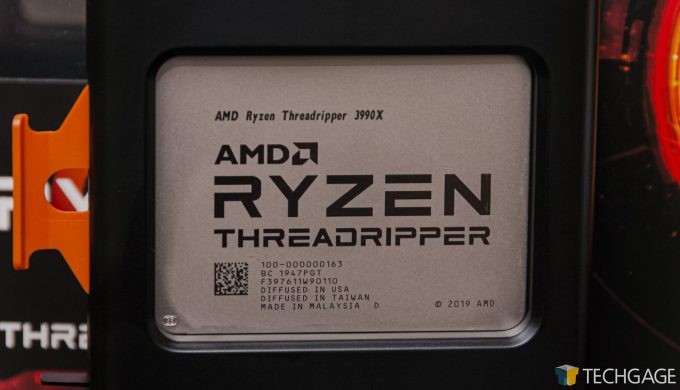 Most who build a rig around the 3990X are going to opt for a minimum of 128GB of memory, which, given the workloads the chip targets, is probably a given. Those with the most complex work will want to opt for 256GB, even if it means sacrificing the frequency a little bit.

We assume that 32GBx4 DDR4-3200 kits will be most common for this platform, as DDR4-3600 kits at that density are a little rarer (and a lot more pricey). We can’t yet confirm whether DDR4-3600 should be considered guaranteed for that size kit, but since the max official supported speed sits at DDR4-3200, that’s where you should set your expectations.

We ultimately saw better scaling in Linux than in Windows, which was largely to be expected. Whereas Linux has had many-core CPUs in mind for ages, it almost feels like an afterthought with Windows, especially since its inherit design doesn’t like to break out of 64-thread groups. So, it’s not too surprising that we had a harder time finding great scalability in that OS than Linux.

There were even some occasions where we expected to see great scaling, but did not. One notable example was with our real V-Ray test. While the standalone benchmark scaled without issue, we didn’t see the same sort of gains with our real-world renders. We’ll continue to test over time, and see if anything changes. Once we get 128GB of memory plugged in there, we’ll also retest to see if anything changes by moving up from 64GB (even though our tests should not ever require it – Premiere Pro might be an exception.)

A CPU like the 3990X is so bleeding-edge, the market needs to catch up, which is both a cool and unfortunate thing. It’s going to take a while for more solutions to take advantage of such huge CPUs, and while not every workload needs such capacity, if you can take advantage of a 32-core, that same software should technically be able to scale higher. The ultimate goal is huge parallelization to get a job done quicker, and in many of our tests, many of the cores just go unused. That ignores the potential of doing more than just a single thing on your machine, though. More cores means more virtual machines and in general, better multi-tasking.

And speaking of virtual machines, while AMD has been pricing its Threadripper and EPYC processors at competitive prices, VMware has recently decided that for some of its products, a CPU with greater than 32 cores will require a 2-CPU license. That instantly makes a CPU like a 48 core seem less attractive, because 96 cores from two of those would cost the same in licenses as 128 cores from dual 64-core chips. We’re not sure how great this move is for anyone but VMware, but it’s an odd caveat to be aware of if you purchase such licenses. Fortunately, VMware seems to have a grace period for this license change, but many customers are going to be miffed having to pay for two licenses for one CPU.

A preview of our overclocking attempts as things get hot under the cover.

On the performance front, it always pays to know your workload, but that’s especially true with the Ryzen Threadripper 3990X. It’s not a chip for everyone, but if your workloads actually take advantage of as many cores as you can give them, then you’re likely to see great scaling here. Just don’t pull the purchase trigger until you can validate for sure (namely if we don’t cover the solution you use).

We did some initial testing with overclocking and were getting some interesting results, although not entirely stable. We even managed a thermal shutdown at around 101C. We’ll be releasing a follow-up later on once we manage to sort out some of the stability issues.

Overall, despite the fact that it doesn’t scale well all over, the Ryzen Threadripper 3990X is a phenomenal processor. The fact that it doesn’t scale well in every case appears to us to be more the fault of software not being designed for it, rather than be a fault of the product itself. At the second-gen Threadripper launch, the situation was bad enough, as 32-core CPUs finally hit the desktop. Now we’re seeing a doubling of cores once again – that’s going to take some time to properly support.

If any area truly needs love, it’s really video encoding, and possibly image manipulation. Lightroom should scale better than it does on these massive CPUs, especially given how much cache is on-hand. It’d also be great to see better scaling out of Premiere Pro. Perhaps since these big CPUs are a reality now, we may see Adobe and others work towards better supporting them.

While the scaling situations could be better all-around, it doesn’t diminish the fact that this is an incredibly impressive CPU. You just need the right workloads to take full advantage of it – and chances are you already know if you have them or not.