If you’re interested in Windows performance, you may want to take a look at our experiences with the 3990X here.

It’s been a lot of fun watching AMD and Intel duke it out over CPUs the past few years, though it’s become obvious at this point which one has proven mightier. It was the fall of 2017 when AMD released its Ryzen Threadripper series, with the top-end 1950X sporting 16 cores. A month later, Intel followed-up with its Core X-series, with the 7980XE one-upping AMD by offering 18 cores.

After the launch of Threadripper and Core X, it seemed like AMD decided to take its gloves off. In late summer 2018, AMD released its second-gen Threadripper series, which introduced 24- and 32-core models. Intel’s attempt at competing against these chips soon came by way of the 28-core 3175W, a Xeon custom-tailored for enthusiasts.

Even though AMD had been offering a 32-core CPU, Intel’s 3175W was priced with a huge premium, something that’s suddenly become a lot harder for the company to get away with. Intel still offers the 3175W for around $3,000, which makes AMD’s 64-core at $3,990 seem downright alluring. 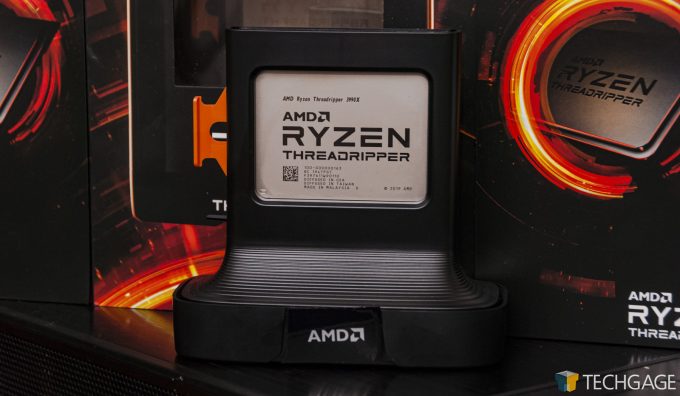 As we’ve said before, AMD has done well at recalibrating the CPU market. At a time when quad-cores seemed to be de facto, AMD came along and pushed six- and eight-core chips to the masses. After Threadripper and Core X debuted, the benefits that end-users could derive from these many-core chips became obvious really quickly. More cores means heavier work gets done quicker.

While the second-gen Ryzen Threadripper series was impressive, it was really the 12- and 16-cores that we recommended to most people, as the 24- and 32-cores introduced a design that detrimentally impacted certain workloads. Over time, this design was worked around by many software vendors, so some workloads improved – but not all. The much-improved design of the third-gen Threadripper makes that concern go away, even if we have five dozen or so cores.

With Windows threading being a little questionable at times with high core-count chips, Linux becomes a fun playground for pushing a CPU like the 3990X to its limit. At a time when the 2990WX struggled in many Windows tests, our Linux tests seemed indifferent, delivering far better performance overall. The same is largely true here with the new 3990X.

As we said at the launch of the 2990WX, it’s important to know who the 3990X is for. It’s not for your everyday enthusiast, regardless of how deep their wallets are. Most people who would buy the 3990X based on price alone would likely see worse performance for their uses. If you’re a high-end gamer that dabbles in creation, then the Ryzen 3950X is a good all-rounder. For those with gaming as a paramount concern, the even higher-clocked lower core-count Ryzens should be considered (such as the 3800X or 3900X), and of course Intel’s higher-end gaming chips (like Core i9-9900KS).

In Windows, threading success is largely going to depend on the software solution. In our Windows testing, we cover many consumer-oriented workloads, whereas for Linux, we gravitate more towards compiling, compression, security, and so forth, along with some shared tests, like Blender, HandBrake, and V-Ray. Threading improvements in the Linux kernel aside, a lot of the benchmarks we run in Linux have been designed with many-core CPUs in mind for a while, which helps greatly with scalability today.

Note that for this platform, the intended audience should be equipped with at least 128GB of memory; or, in other words, at least 1GB per thread. We don’t have a 128GB memory kit kicking around, so we instead used the same 64GB DDR4-3600 solution that the rest of the CPUs had been tested with. We were told by AMD that this would not detrimentally impact performance much, if at all, but that 128GB is still the suggested minimum.

If you’re looking to maximize memory bandwidth on this platform, you’ll want to try to go with four DIMMs rather than eight. AMD says that with eight DIMMs, the official supported DRAM speed is 2666MHz, whereas that increases to 3200MHz with four DIMMs. That said, there’s no hard roadblock that would prevent you from overclocking, but you shouldn’t expect anything beyond what’s officially supported – just in case.

And with all of that covered, we’ll quickly look over our testing methodologies, and then move right into a look at what the 3990X can do. 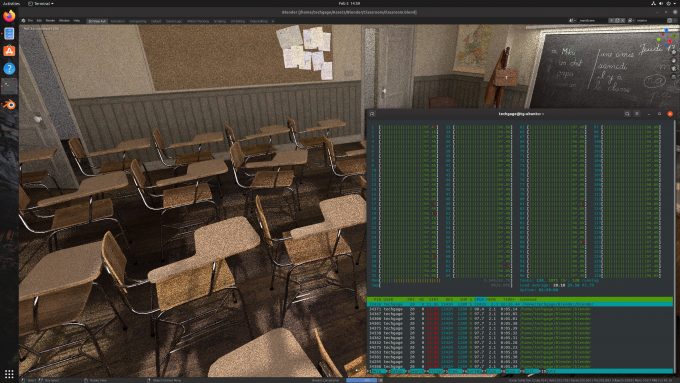 Many of our tests are run with the help of Phoronix Test Suite, with tests locked to a specific version to generate repeatedly reliable data. We don’t do any real OS configuration outside of disabling sleep, and enforcing the performance power profile.

On AMD platforms, XMP is enabled, and that’s all that’s touched. There is no automatic overclocking performed by the EFIs on these platforms, as far as we can tell (when compared to reviewer guide performance). On the Intel platforms using ASUS, XMP is enabled, and “Yes” is chosen to let it optimize the settings, after which point the Turbo boost settings are reverted to Intel default behavior. This ensures proper memory timings and settings are enabled, and that no automatic overclock will take place.

All of the platforms we tested on had their EFI updated before testing, if one was available. While the current EFI available for our tested ASUS Zenith II Extreme from ASUS’ website will handle the 3990X no problem, we upgraded to an internal beta for this review, as it was expected to deliver better stability with DDR4-3600 memory. 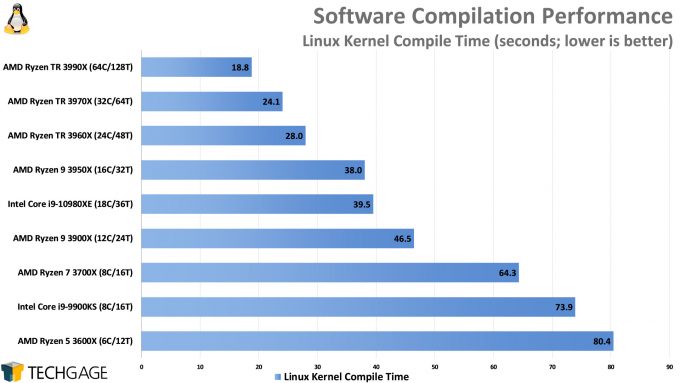 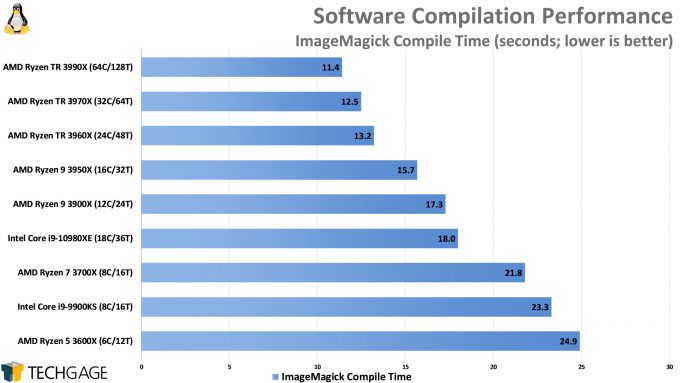 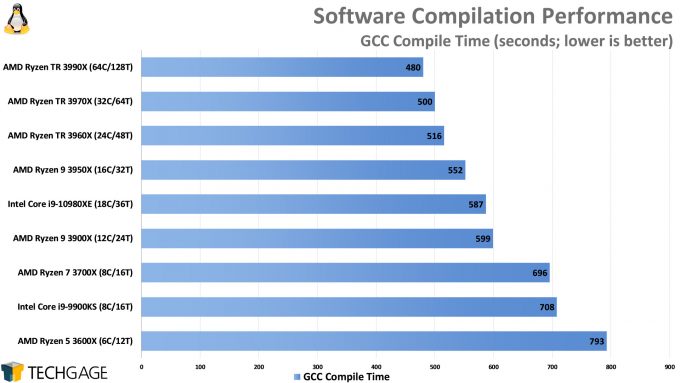 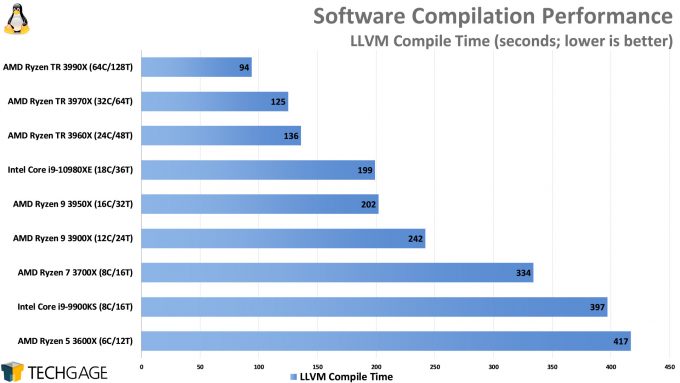 Software compiling can be a tough test to get reliably scalable numbers out of, because depending on the project, there could be lulls in the process where a CPU could go virtually untouched for a while. We see the same thing sometimes in rendering, and especially photogrammetry.

No one is going to purchase a $3,990 processor for a compile that takes just 20 seconds, but it’s nice to see that the 3990X has managed to distance itself a fair bit from the 3970X in the Linux kernel compile test. Reduced gains are seen in the other compiles, but the end result with LLVM is pretty satisfying. 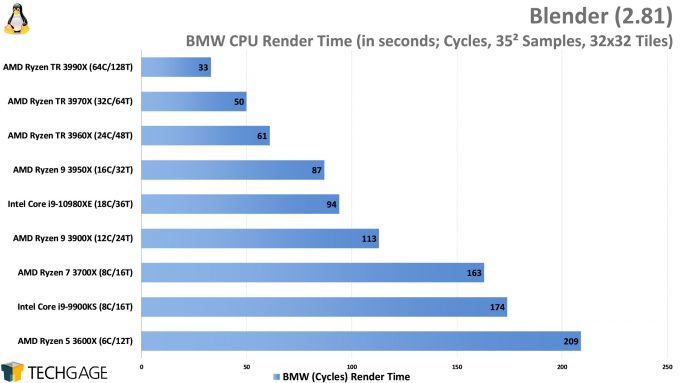 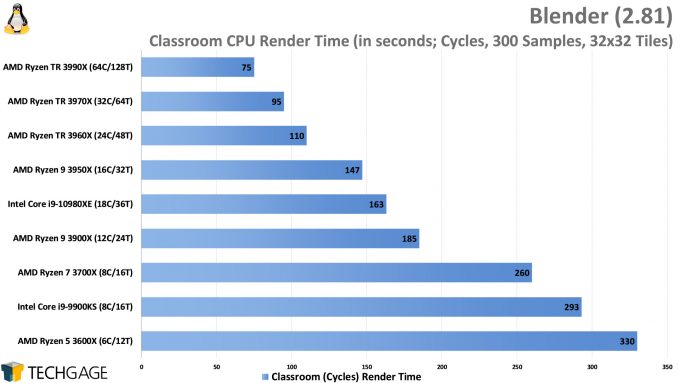 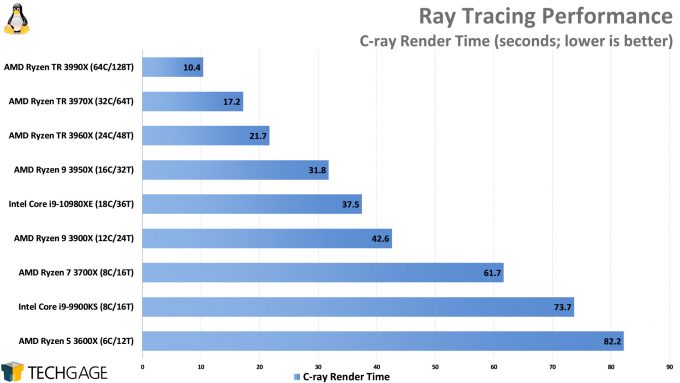 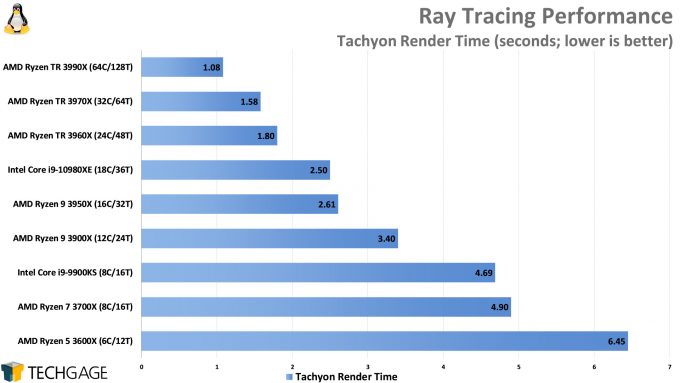 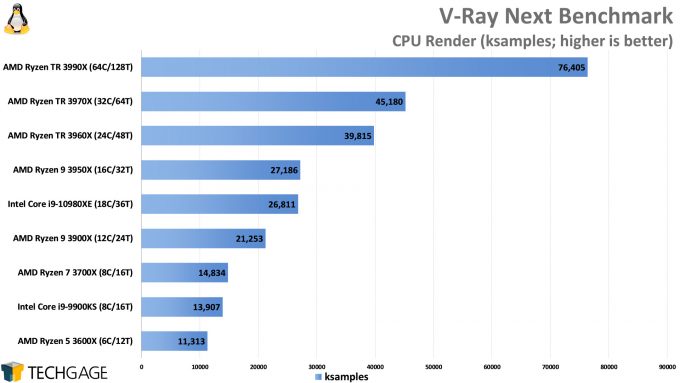 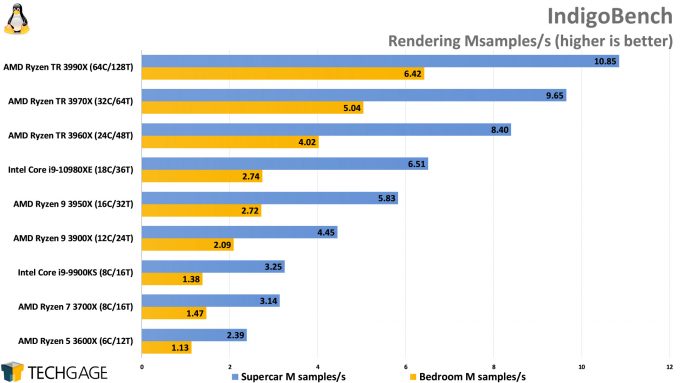 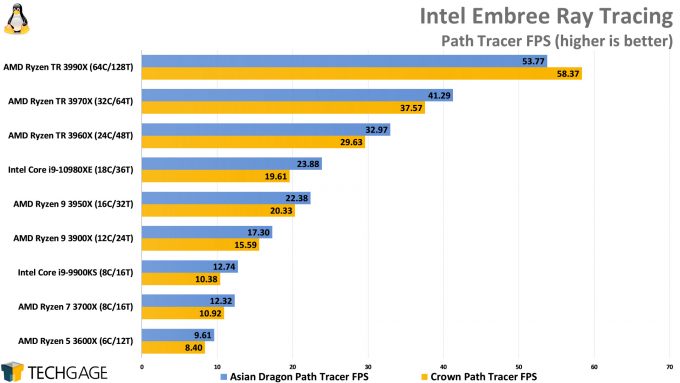 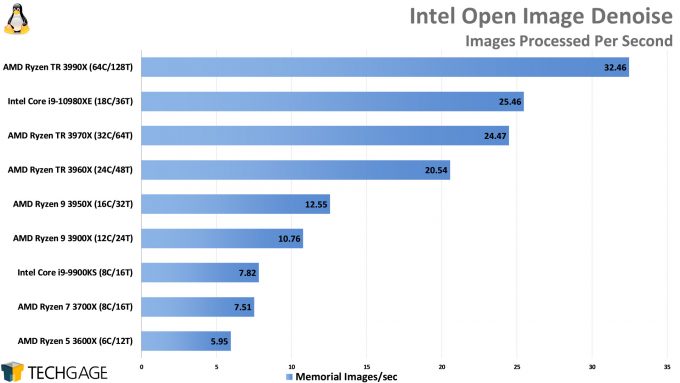 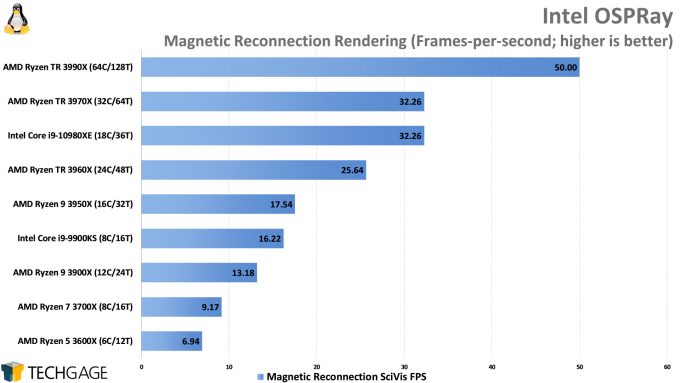 There’s a ton of rendering tackled above, but most of it paints the same kind of picture: in every single case, the 3990X soars to the top, albeit with different strengths depending on the test. In both Blender and V-Ray, we see exceptional scaling, with the latter in particular highlighting a nearly 70% gain. We admittedly wouldn’t expect to see that same gain in the real-world, but we happen to have real-world V-Ray performance en route for our Windows article, so we’ll see how the numbers agree.

We’re sure AMD will be pretty glad to see the Intel ray tracing results above, because when you’ve got more cores than the competition, chances are you’re going to do well. That’s even considering the fact that some of these tests utilize AVX-512 on Intel’s Core X-series. As we’ll see in our Windows results, the LuxMark test there doesn’t scale beyond 64 threads, even though it’s built with Intel Embree, which we can see here scales beyond that no problem.

Rendering is just one potential workload the 3990X has had thrown at it, so let’s check out some others on the next page: