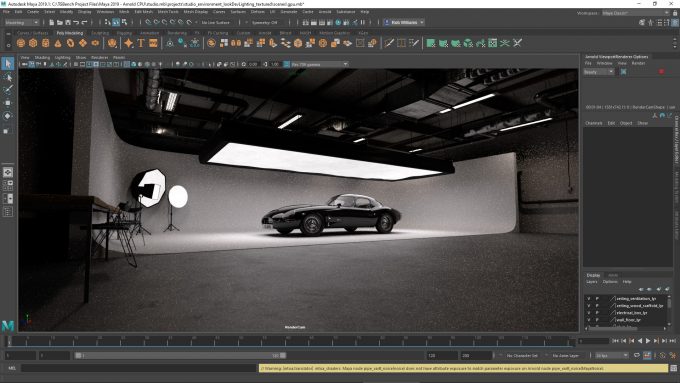 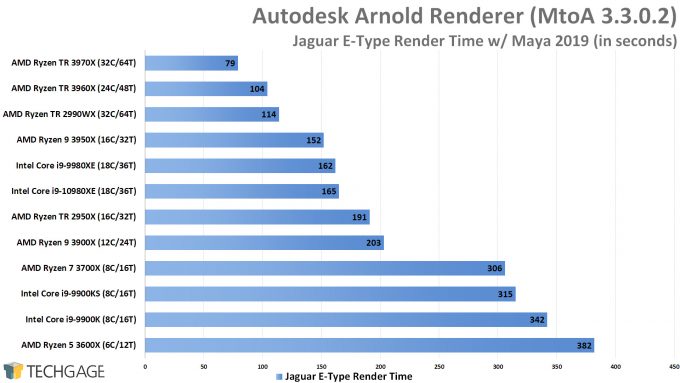 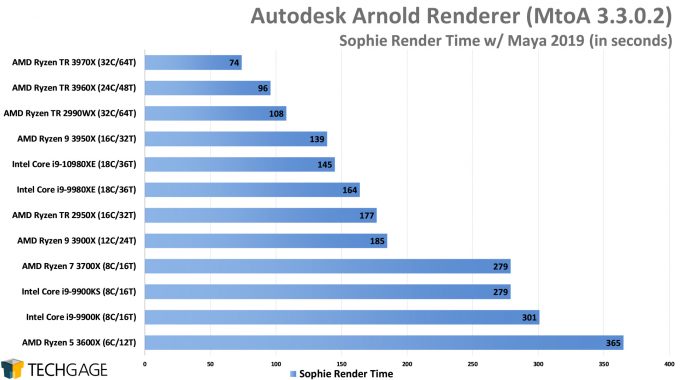 We’ve mentioned our uncertainties with what to expect from the new Threadrippers a few times, and it’s only because after spending so much time testing the original and last-gen Threadrippers, we were cautiously optimistic that we’d actually see the kinds of gains AMD was promising. With rendering, we truly didn’t expect too much, since rendering was the exact workload a chip like the 2990WX was best-suited for. But yet, we do in fact see massive generation-over-generation performance gains.

Meanwhile, we’re seeing immediate proof that if rendering is important to you, you don’t want to skimp on your processor. The traditionally fast 8-cores listed here prove slow in this heavy workload. 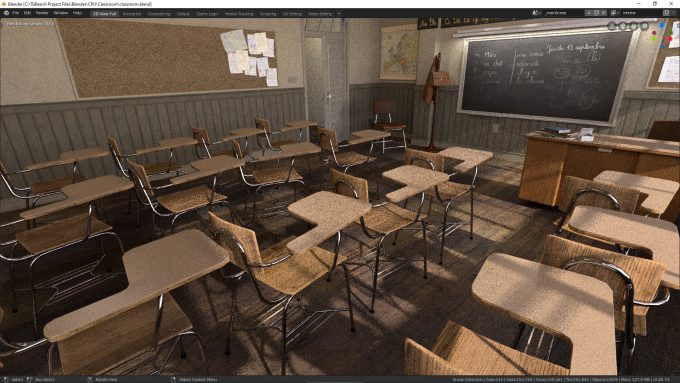 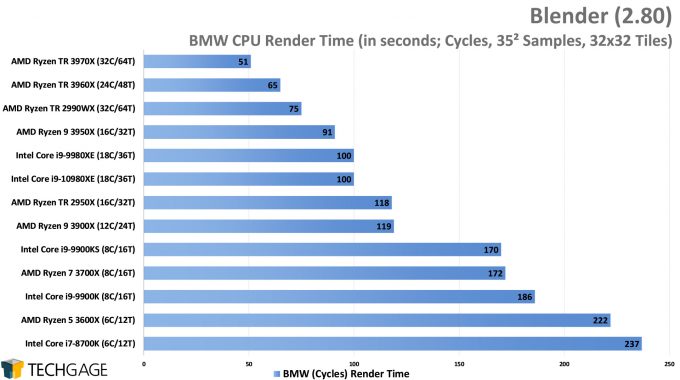 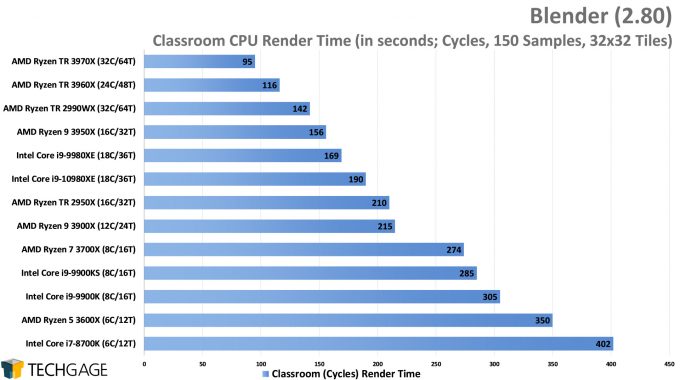 If you hate to see similar results, then the rest of this article might appear boring, because by all appearances, AMD has come to kick ass and take names. Both Threadrippers again soar to the top in Blender, but we know how to shake things up: by adding a GPU. 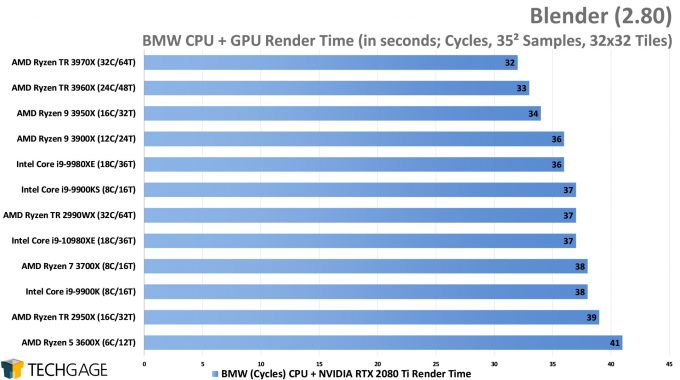 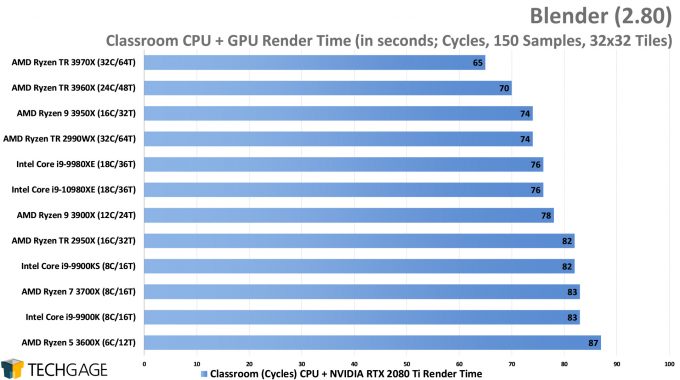 In some of our video encode tests, we saw that the 3970X and 3960X might fall a tad behind after adding a GPU, pointing to possible optimizations that could be done (from some or multiple sources). With Blender, no such detriment was witnessed, with the scaling left in tact. The astute among you may have noticed that the CPU+GPU tests are far quicker than the CPU only renders – so clearly, the GPU is exceptionally important here.

For more Blender performance, you can refer to our in-depth look at Blender 2.80 from a few months ago. It does not include the latest CPUs, but the results above can fill in, since it was all tested with the same version. We tested 2.81 on half of the CPUs listed here, and found no performance differences between the two sets of results. 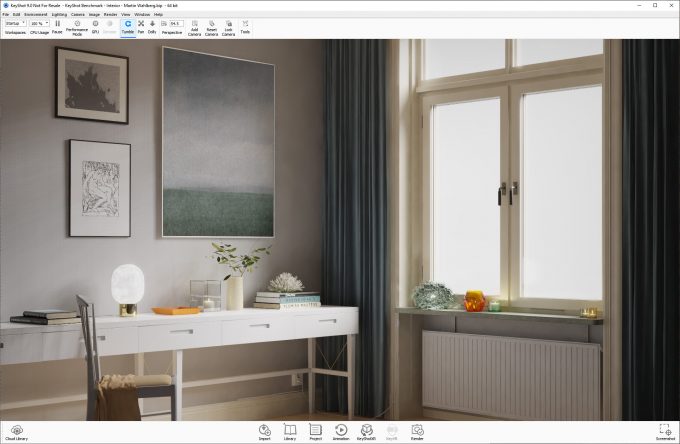 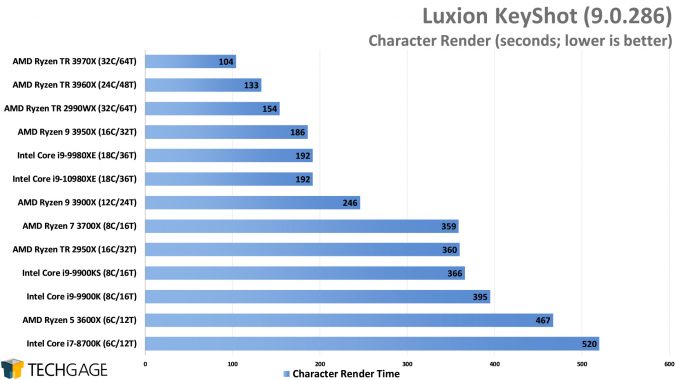 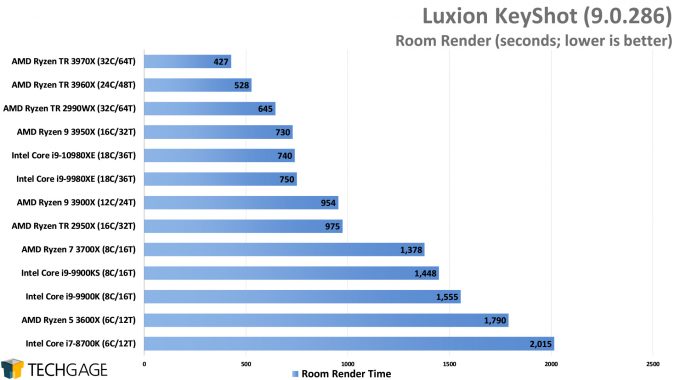 With as much testing as we’ve done with KeyShot, it’s hard to believe that we only introduced it into our test suite last fall, with the launch of the second-gen Threadrippers. Ahead of that launch, it became obvious quick that we needed more tests which took advantage of such big processors, and we’re glad we did, since it’s an awesome tool to play with.

On that note, the last-gen Threadripper had a bit of a regression problem with one of our KeyShot projects, specifically an interior scene which used a lot of glass. This was a problem that ended up being ironed out by the time KeyShot 8 rolled around, and continues to be a non-existent problem in KeyShot 9, as even the 2990WX performs exceptionally well here. Yet, even that result can’t hold a candle to the new 32-core. Just look at those performance gains – from 645 to 427 seconds in a single generation. Is it any wonder AMD has decided to charge a bit of a premium on this year’s 32-core? 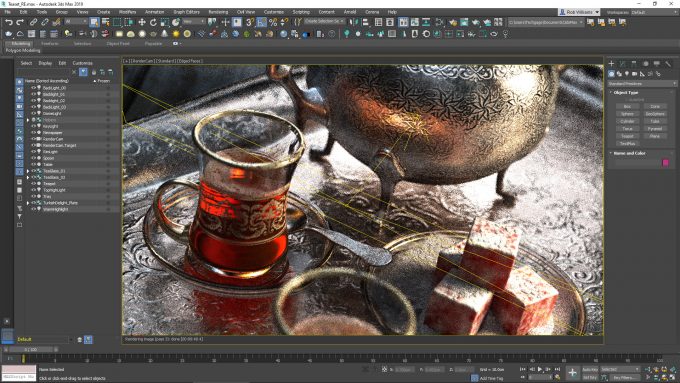 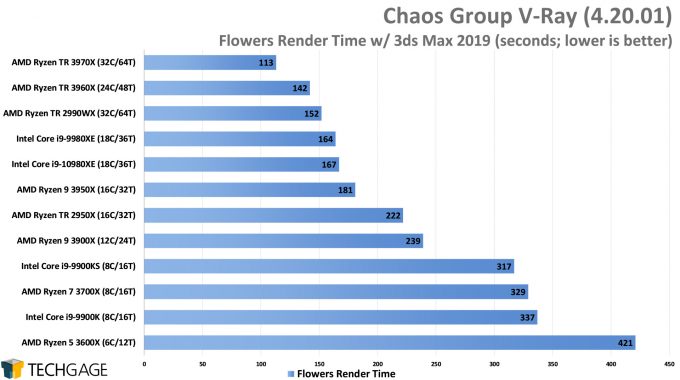 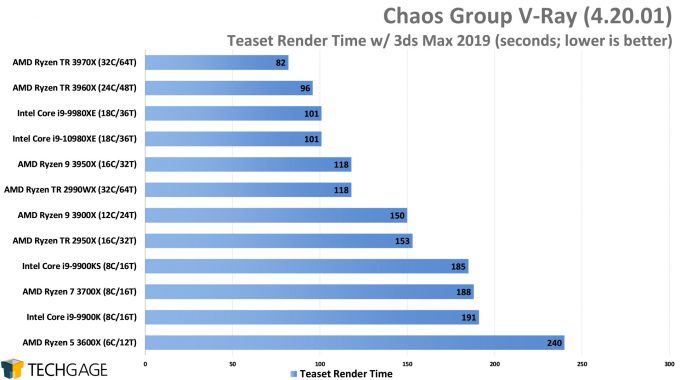 V-Ray typically performs strongly on Intel CPUs, but when AMD has far higher core counts to boast, that Intel edge no longer matters. Both the 24- and 32-cores continue to perform so well in our workloads, but we’ve seen hiccups with GPUs before; will it happen again? 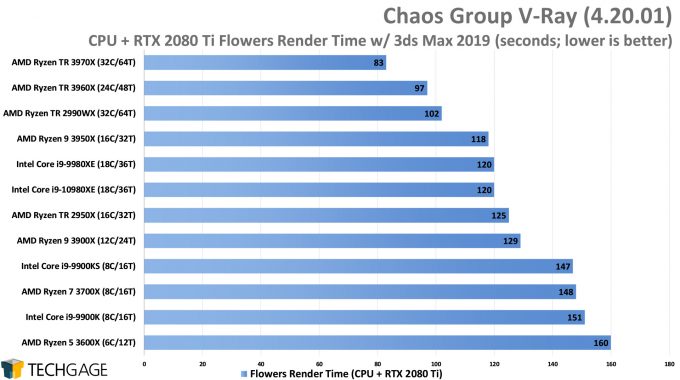 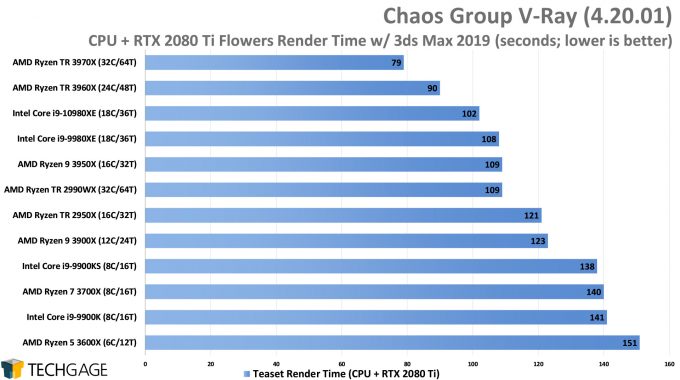 The answer is a definite “Nope”. V-Ray is one solution that happens to thread just fine in heterogeneous rendering, and with the new Threadrippers, some seriously attractive performance can be seen. Again, you don’t want to skimp on a GPU – it’s likely just as important as the CPU, but that of course assumes you are not locked to the CPU-only renderer. 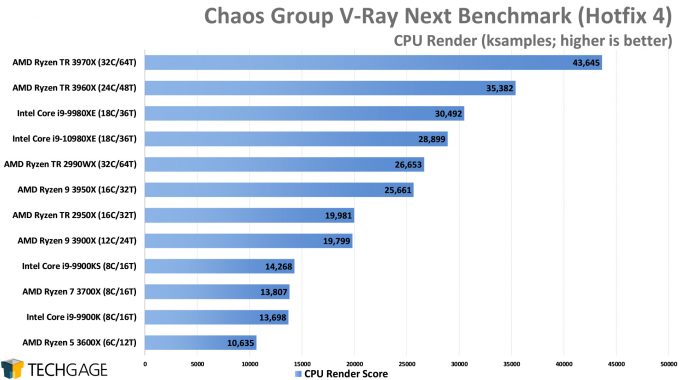 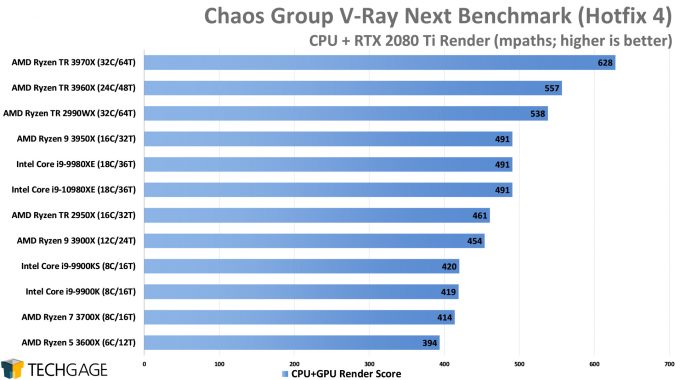 Scaling with V-Ray’s standalone benchmark seems to agree pretty well with our real testing. The new Threadrippers once again rule on top, especially so on the CPU only side. From 30K with the 9980XE to 43K with the 3970X is quite a jump.