by Rob Williams on August 29, 2022 in Motherboards, Processors

At an event held in Austin, Texas, AMD has just unveiled more details about its Ryzen 7000 series processors and AM5 platform, both set to launch to consumers on Sept 27. Some huge promises revolve around the product, including a 13% IPC boost, and hugely competitive performance in both creator and gaming workloads.

Up to this point, AMD hasn’t kept its upcoming Zen 4 architecture, AM5 platform, or Ryzen 7000 processor series much of a secret. At this year’s Computex, held earlier in the the summer, AMD talked about some of its key features, and initial expectations.

Naturally, Zen 4’s launch is nearing ever-closer, so AMD’s begun to divulge more about its upcoming series. At an event held in Austin, Texas, and being livestreamed this evening, the company talked at length about why its Zen 4 chips are the best it’s ever made, and talked about what plans it has for AM5.

First and foremost, AMD says that its Zen 4 is going to power its Raphael, Genoa, and Phoenix products, all catering to different market segments. At this event, the company even talked a little bit about RDNA 3 Radeon graphics, and also an upcoming Zen 4C, which are smaller versions of Zen 4 that look to cater directly to the server market.

On the Zen 4 side of things, AMD said that this architecture was developed with the goal of delivering the best possible performance with likewise the best power efficiency. That’s resulted in some bold claims. 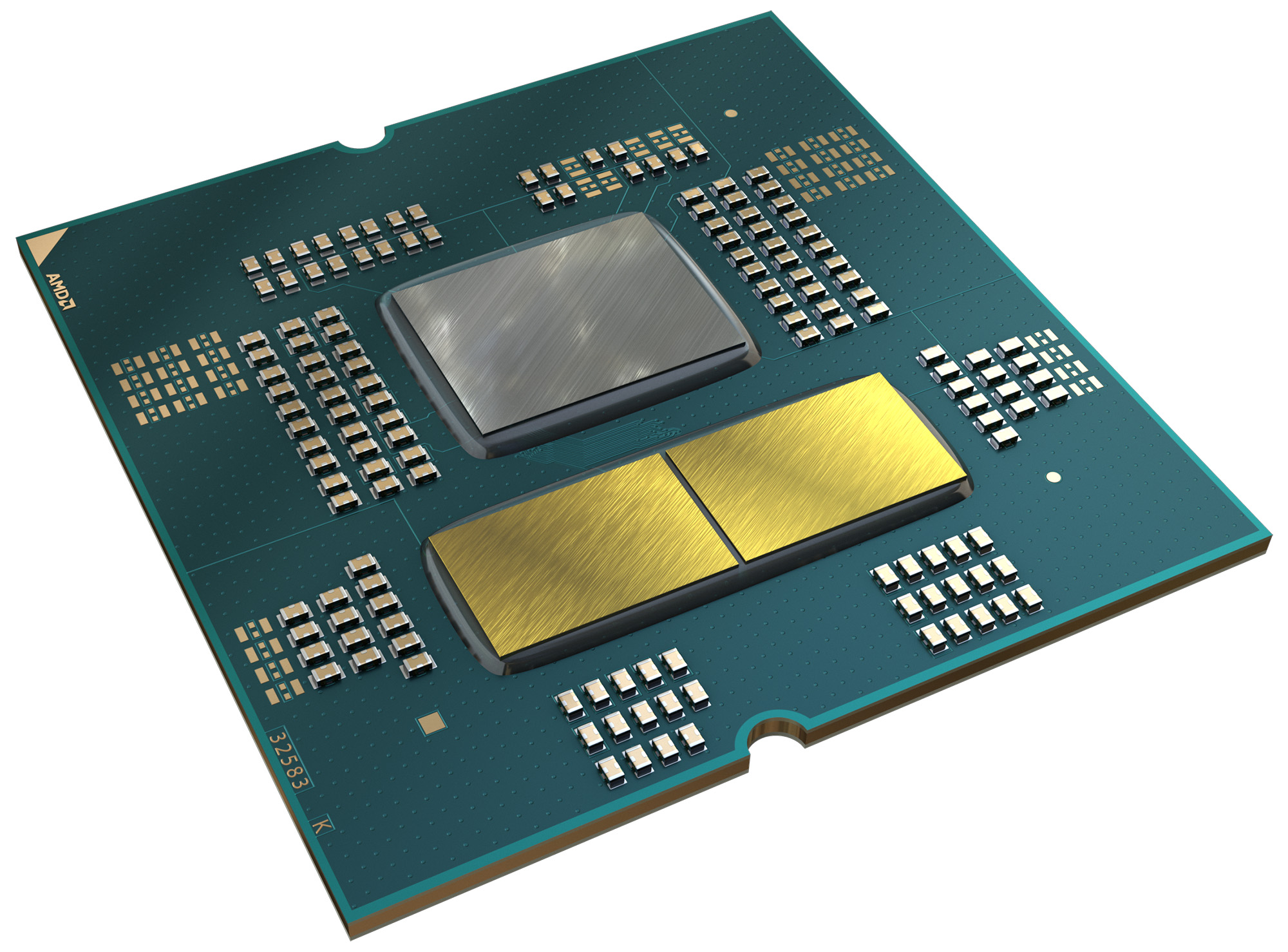 AMD says that Zen 4 can deliver the same performance as Zen 3 with 62% less power; or it can deliver 49% improved performance at the same power. That sounds great on paper, but the top-end Zen 4 chips have had their TDP hiked to 170W, which AMD says was done to allow for improved top-end performance, which includes giving overclockers extra headroom. Still, these efficiency improvements sound good.

On the stage, AMD CEO Lisa Su had lots of praise for Zen 4, noting it’s exceeded expectations. Prior to this event, the company said that IPC improvements would be between 8-10%, but today, that’s bumped to 13% geomean. As the (ultra-ultrawide) slide below highlights, some scenarios will show small gains, or none at all, while others will show notable improvements.

As you’d expect, AMD had lots of gaming-related performance to talk about, and it really wanted to prove a point with this comparison:

In the actual demo, game footage of F1 22 was running on each side, and ultimately, AMD showed that its mid-range Ryzen 7600X could exceed the performance of Intel’s top-end Core i9-12900K. Here’s a taste of some other games:

Obviously, this kind of testing needs to be done in reviewer labs to see if everything here matches up. But, to compare AMD’s (current) lowest-end Zen 4 to Intel’s top-end 12th-gen is quite something. We’d be remiss to mention Intel also has a new generation CPU architecture coming up, so we might see another shake-up at that time.

Before moving onto the models set to launch, we should mention that Zen 4 will support the AVX-512 instruction set, which is useful in AI workloads. Intel has supported this instruction on multiple CPUs, but on the consumer side, we haven’t seen much (or anything?) to take advantage of. With AMD also offering the instruction set now, it’ll be interesting to see if that changes.

With AVX-512, AMD says it delivers 1.3x better FP32 performance over Zen 3, and an over 2.5x improvement to INT8 inferencing.

So, you probably want to know which Ryzen 7000 CPUs are coming, don’t you? Well, we have that covered with the image below: 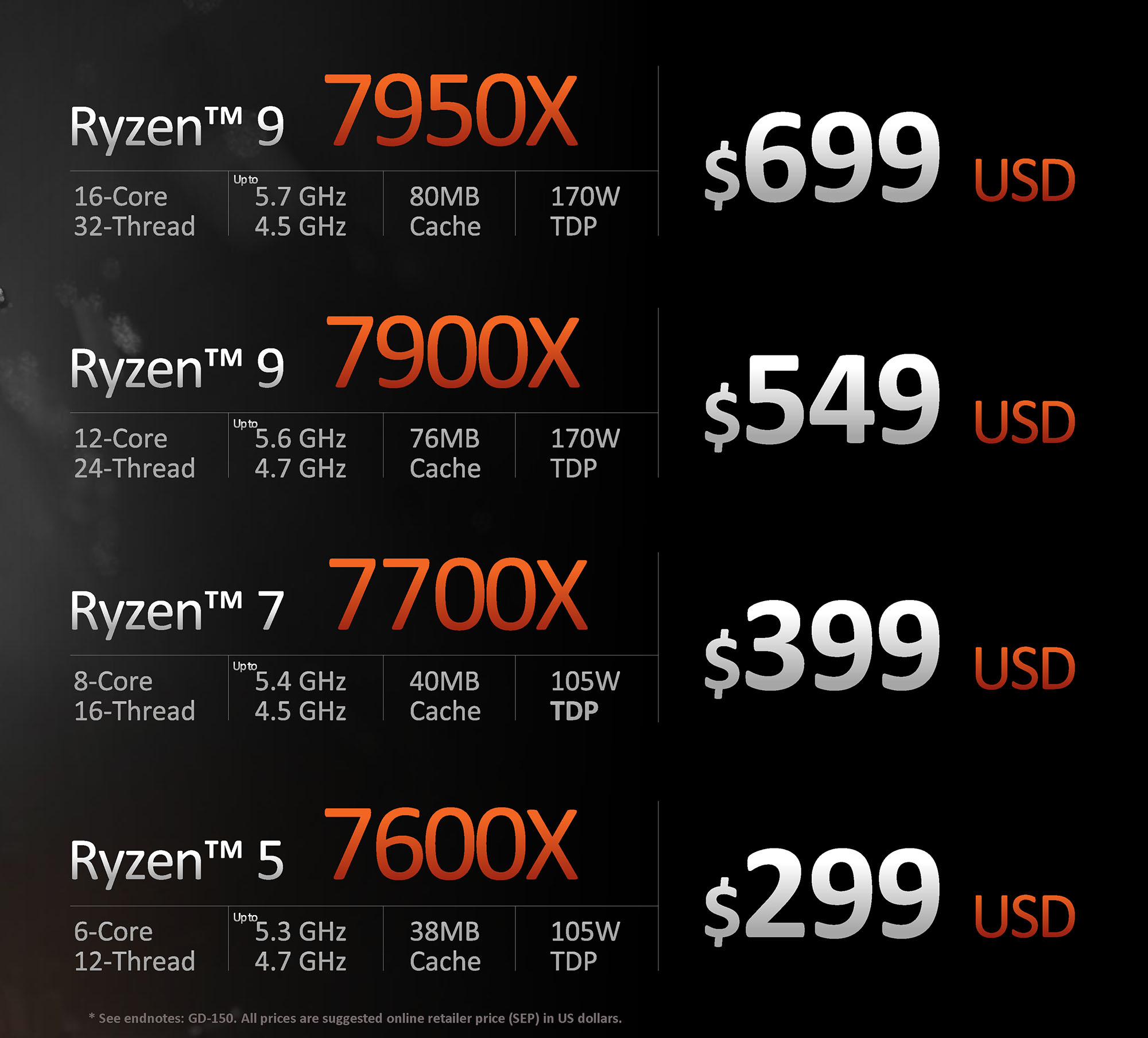 In terms of cores and threads, AMD hasn’t changed anything here. The top-end model still boasts 16 cores and 32 threads, but as seen in the IPC and multi-thread tests above, these new cores are notably faster (and more efficient, for that matter.)

It’s also worth noting that the ~100W TDP the previous-gen top-end chips saw has been hiked to 170W, while the lower-end chips inherit a 105W TDP. We’ll of course learn how much that matters with regards to power being pulled from the wall once benchmarking can get underway.

Another thing worth highlighting is the fact that pricing has been largely unchanged this generation. Last-gen had a 5800X for $449, but now AMD offers a chip with the same core count (and higher clocks) for $50 less. This is despite the fact that global inflation seems to be impacting everything lately.

One reason to be thankful for the same pricing as last-gen is the fact that DDR5 memory is still more expensive than DDR4, so if you want to upgrade to AMD’s latest and greatest, you’ll be glad to not have to overspend everywhere.

During a Q&A session, AMD noted that Zen 3 and AM4 are not going anywhere for some time, so if you want any chips even lower than the 7600X, you may want to consider a Zen 3 platform instead of waiting an undetermined about of time for the Zen 4 equivalence. 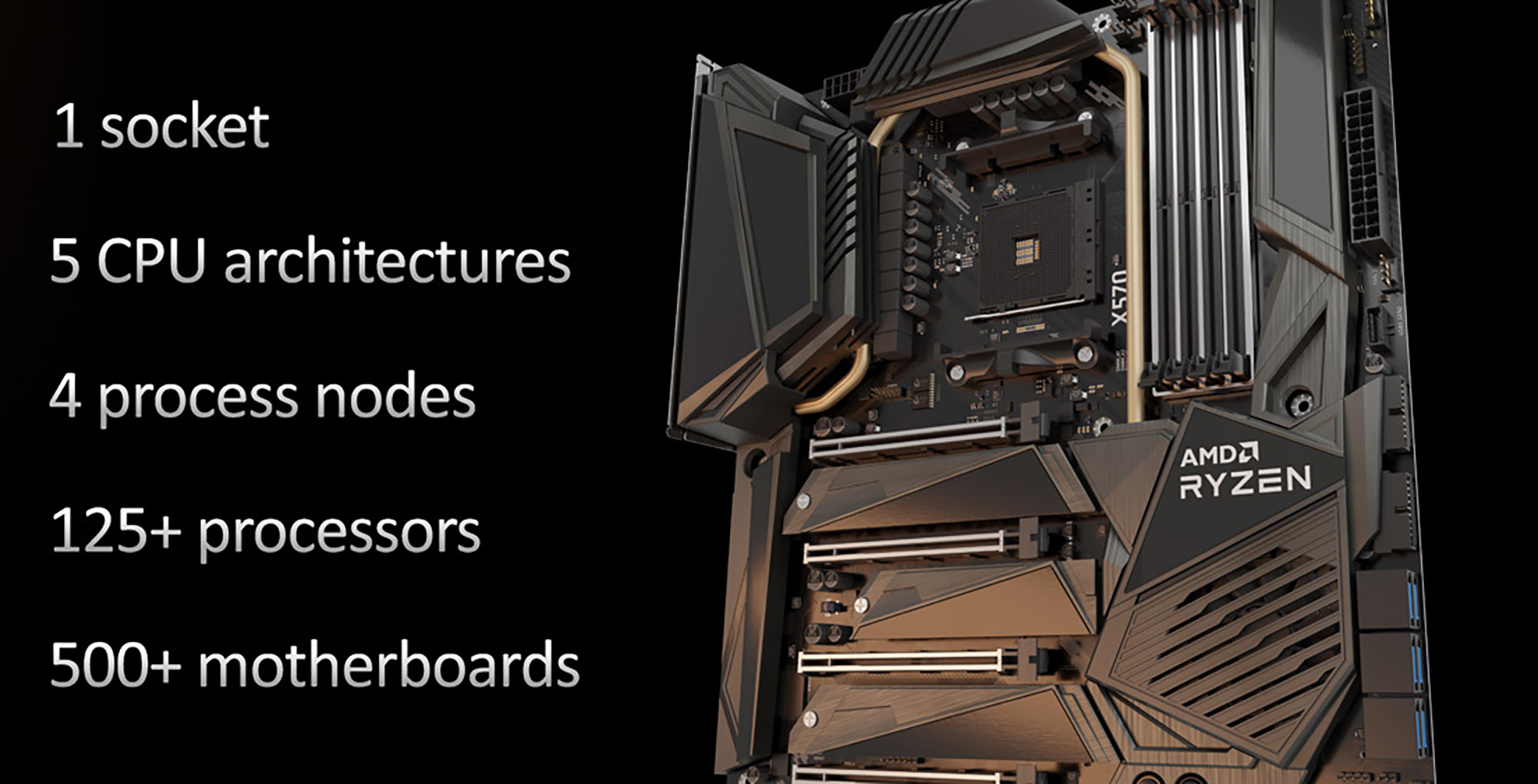 On that note, AMD talked about it being able to stretch five processor generations across a single AM4 platform, and it hopes to continue delivering on that long-term support with AM5. The current promise is support until at least 2025, although a + sign hints that it could be extended. Nonetheless, this does mean if you adopt Zen 4 at launch, you can expect to be able to upgrade to the next couple of Zen generations. Even better? AM5 is still compatible with AM4 CPU coolers, which may save you money when upgrading. 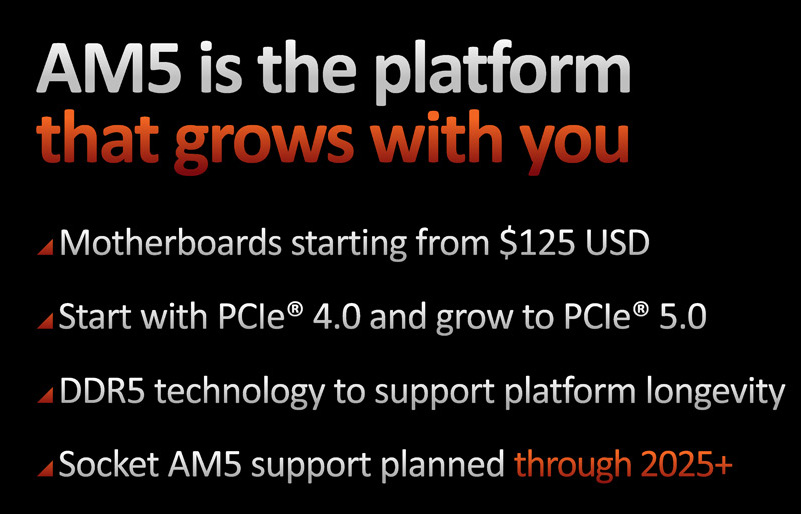 Zen 4 is built around a 5nm process, showing AMD hasn’t thought about slowing down its slimming of chips. The company actually boasted about the fact that a Zen 4 core takes up much less space than an Alder Lake core, but ultimately, what truly matters is what we see from a performance and efficiency standpoint, but smaller dies do make a chip easier to cool – and Intel’s latest-gen do run really hot.

We will have other things to talk about in our upcoming Zen 4 launch content, but will wrap this initial look up here, as time to write is winding down, and the most important things were tackled here. 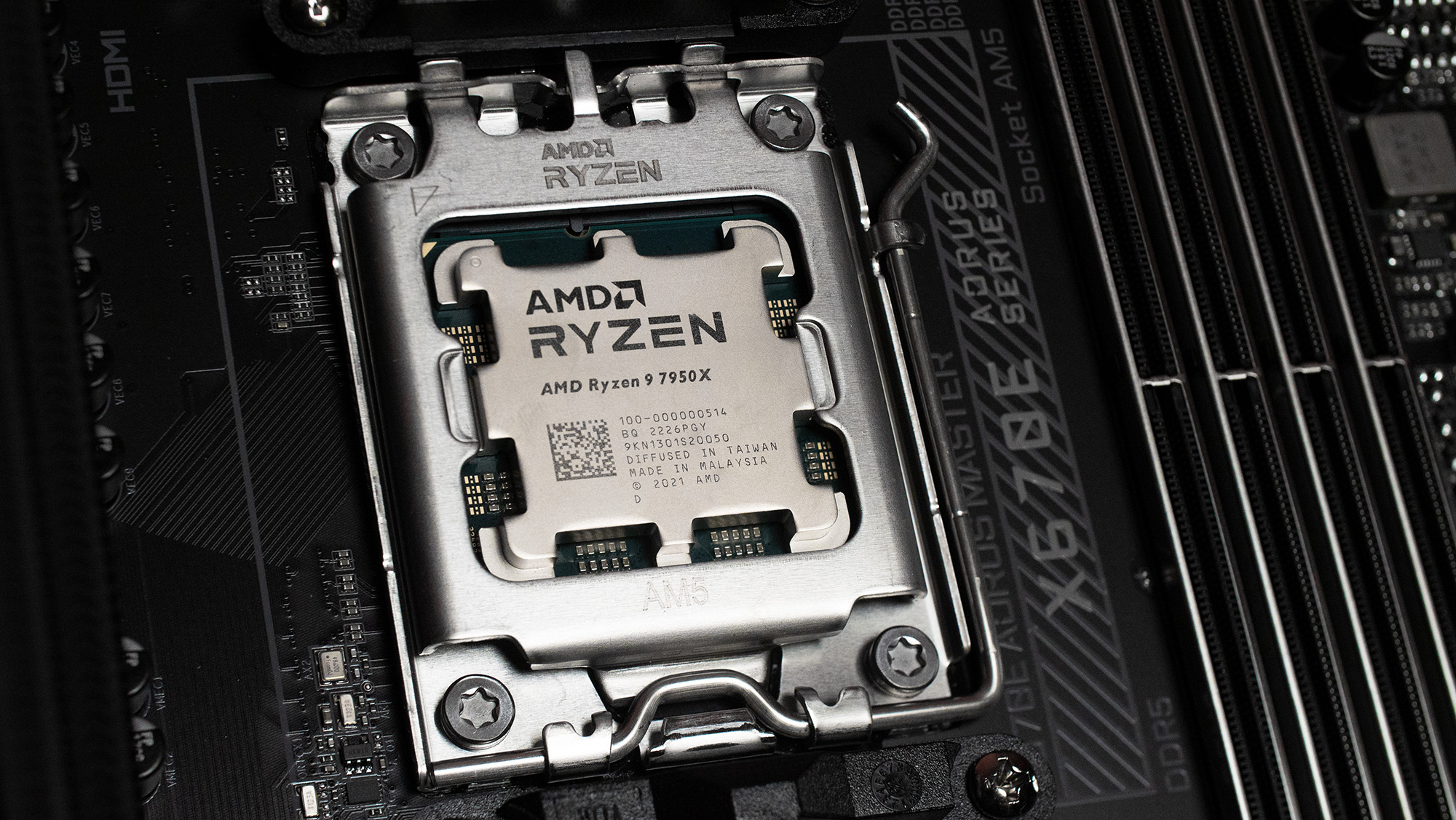 We didn’t mention the RDNA3 demo, but that’s because it was really quite simple in nature, showing playback of a really attractive game we fail to recall the name of. No frame rates were shown off; so harder info will come in time.

One last thing to mention: Zen 4 will be launching on Sept 27, and AMD believes current global situations should not impact its availability, as the company deliberately allowed extra time to make sure all regions received product ahead of launch. So, if you really want to upgrade, hopefully you’ll be able to do so right at launch.