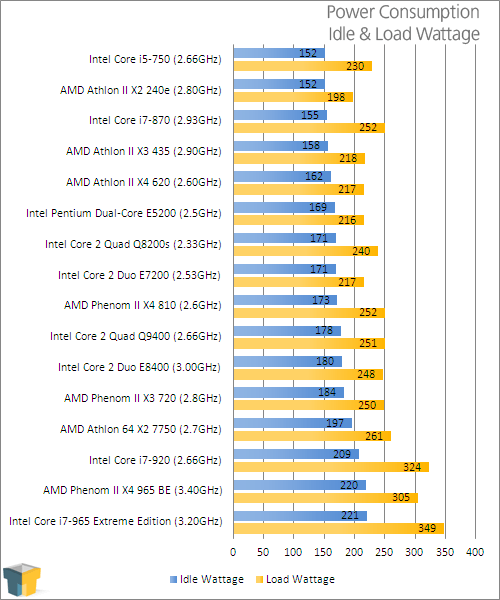 If the performance we saw throughout the results was any indication, the power consumption for these two chips shouldn’t be too bad, and it isn’t. But what this chart does show is just how efficient Intel’s processors are. Its Core i5-750 quad-core idled at the same wattage (motherboard withstanding) as our dual-core 240e, and hit a max load of just 32W higher. That’s impressive. AMD’s power consumption isn’t horrible, but given what Intel has been able to achieve, we can see that improvements can be made, but we won’t see that until the next major architecture.

Throughout all of our performance results, we saw both the 435 and 240e fall well behind all of the other processors in our line-up, but of all the near-20 processors in these charts, these two CPUs from AMD are only two of the four in our chart that sell for below $100 (to be fair, the X4 620 is currently selling for higher than the $99 SRP). Given that, we didn’t expect anything amazing with the results, especially given the lack of an L3 cache, but despite all that, these CPUs aren’t a waste of time.

For the price, both processors performed quite well, and most often, the scaling would work in their favor when compared to processors that cost almost two times as much. It’s also impressive that the 240e beat out Intel’s E5200 in almost every test, when the non-“e” version costs $5 less. I’ve said it before, and I’ll say it again… the value in most any computer component today is very high, and these processors are no different. 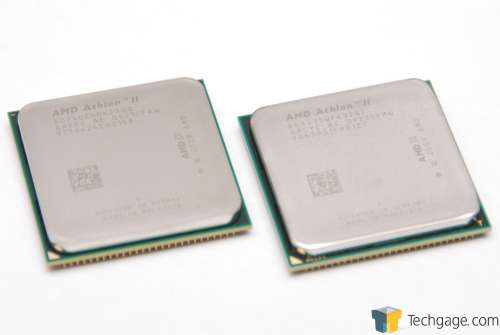 If you’re on a real budget, then anything form the Athlon II line-up is worth a look. It comes down to how heavy you multi-task, or take advantage of multi-threaded applications, and also how much money you’d like to save. The X2 240e sells for $77, while the X3 435 sells for $87. Personally, given these prices, I’d be apt to splurge the extra $20 or so to upgrade to the X4 620. It might be a bit slower at single-threaded tasks than both of these CPUs, but it’s a quad-core, so it’s going to bring obvious benefits.

But whatever your tastes, AMD truly does offer a CPU for you, and at your price-range. If you’re looking for something with a bit more oomph, than I’d recommend a lower-model Phenom II, but for the under $100 crowd, these can’t be beat.