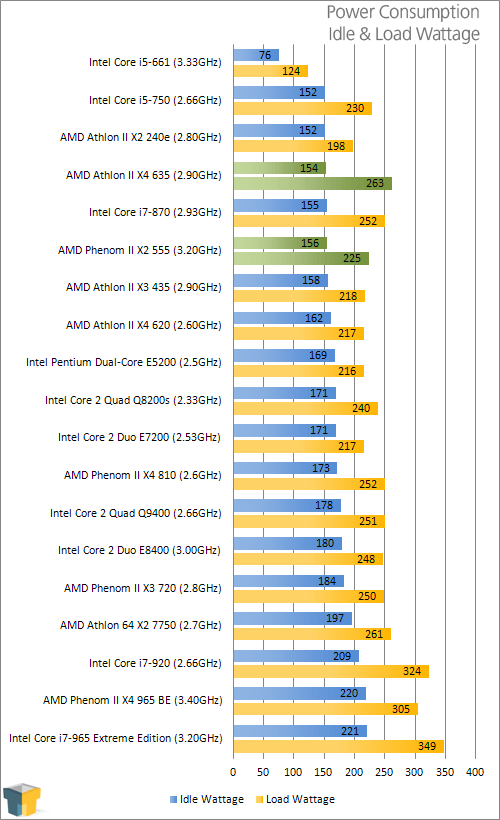 Interestingly, despite the higher clock-speed, the Athlon II X4 635 idled at a lower wattage than the X4 620, but it had a much higher load wattage. Also interesting is that the X2 555 dual-core pretty-well matches the power consumption of the original X4 620 quad-core. For what they are, though, these are some great results.

I hate to use the word “interesting” once again, but I can’t help it, because it’s the perfect word to describe both of the models we put through the ringer here. I regret not having Intel Core i3-530 results to include here, because that is the perfect competitor to both of these, price-wise (+$5 over the X4 and +$25 over the X2). We’ll be testing out that CPU thoroughly over the next week, however, and will deliver results for it next week.

As it stands, though, it’s easy to recommend either of the two models we took a look at today, and it reaffirmed my faith that the value in processors right now is simply incredible. Take a look at the Phenom II X2 555 Black Edition, for example. It’s clocked at 3.20GHz, has a boat-load of Cache, and costs $100! That to me is undeniably exciting, because for a mere $100, you can have a true powerhouse of a CPU in your machine.

But as mentioned earlier, it’s tough to recommend one of these two models over the other to an end-user, because it boils down to what’s done most often on the machine. For things like media encoding, the Athlon II would be the better choice, due to the fact that it’s a quad-core. Many applications today can take good advantage of multi-core processors, and as you could see in our TMPGEnc Xpress test, the X4 635 shaved near 30% off the encoding time.

In fact, the X4 635 was faster in all of our tests over the X2 555. That doesn’t mean the latter is a poor choice, however, because with its higher clock speed and additional Cache, it can take care of single-threaded tasks a bit faster. Because we utilize only multi-threaded applications in our test suite, this is hard to showcase. But for things like Adobe Photoshop, the faster dual-core would likely be the better choice, as that application isn’t truly multi-threaded at this point in time.

For a fantastic all-around processor, I’d recommend the X4 635, and for a more feature-rich and fast processor, I’d recommend the X2 555 Black Edition (especially if you want to overclock). What would I go with? Seeing as I tend to juggle a lot of tasks at any given time, and take good advantage of many multi-threaded applications, I’d without question jump all over the X4 635 quicker than the X2 555. But that’s me.

Once again, please stay tuned for our Core i3-530 article next week, as it will shine an even better light on the current competition. That chip is about $125 retail, and with its HyperThreading feature, it’s sure to be great competition for both of the CPUs we looked at today.