During a briefing held last week, AMD took the time to detail some of the major changes coming to its Catalyst driver. Of these, the most interesting might be the fact that the UI is getting a major overhaul, and so far, it looks great. In addition to taking a look at this, we also delve into recent stability claims, and also performance increases.

Earlier this year, AMD briefed us on what it would be changing in its Catalyst drivers going forward, and at the time, there was quite a bit to talk about. Of most interest, the company had introduced “CrossFireX Profiles”, which are driver-independent updates that gamers can install to make sure that the latest games have the most up-to-date support. Eyefinity improvements were also discussed, along with 3D stereoscopic support.

At the time of our briefing, it became clear that AMD had a keen interest in improving its Catalyst drivers, and last week, that point was driven home once again. The company laid out a number of improvements that will reach the public in the months to come, and since some of the things discussed was quite noteworthy, we decided to write this quick article to discuss them.

Though AMD did provide us with a test driver, we were unable to take it for a spin due to other things being on our plate. So, for this article we will be referencing the official PDF slide that was gone over during the briefing. Kicking things off, AMD named three main factors that are taken into consideration during its driver development; Stability, Performance and Innovation. 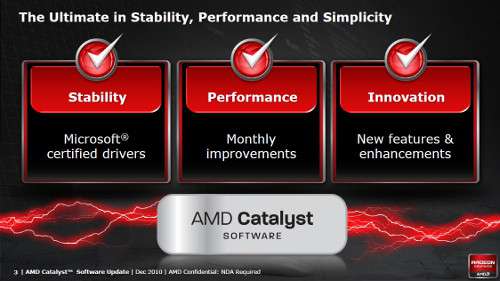 Tooting its own horn, AMD stated that during 2010, its Catalyst drivers had been downloaded over 50,000,000 times for desktops and notebooks (Windows and Linux), and of those, WHQL versions were released on a monthly basis. I do have to wonder what percentage of that 50 million was as a result of us and our testing, though… I’m kidding!

The “Stability”, “Performance” and “Innovation” just mentioned were three separate things AMD wanted to talk about in more detail, as there has been a lot of half-truths floating around that it had wanted to clear up. On the stability front, NVIDIA has often mentioned that its drivers are more stable, but a recent test performed by Perseus Labs, based in Texas, contradicts that. It had done tests across three cards from both AMD and NVIDIA, and with multiple driver versions. Then, stress-testing began. 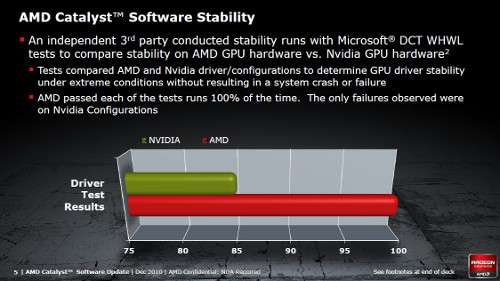 To test, a script was used, although I couldn’t find out how it did its work. The conclusions are that no AMD card ever crashed, but NVIDIA cards, or I should say “card”, did. That card in question is the GeForce GTS 250, a card that is in all regards low-end. These results in themselves don’t prove to me much, as it’s understandable that a brutal workload could affect a low-end card in a strange way, but to be fair, AMD’s Radeon HD 5670 was also tested, which is for all intents and purposes comparable.

Does all this testing conclude that AMD graphics drivers are more reliable? Yes, and no. For me, such testing holds little merit, because it’s so specific, and non-realistic. If the stress-test was a large number of games, then that’s something I could hold some credence in, but not some script that’s not explained too well. For me personally, I’ve had a number of problems with both AMD’s and NVIDIA’s drivers, and I can’t just pick which is worse where stability is concerned. All that matters to me is that this is at least on AMD’s radar, and that its drivers are sure to benefit.

For those interested in reading the report further, we’ve hosted the PDF on our servers. You can download it here (400KB).

Onto a look at performance, AMD stated that in the past year’s worth of Catalyst releases, some games have experienced rather stark FPS increases. Unreal Tournament III and Crysis Warhead, for example, have seen a 15% increase, while Metro 2033 and Resident Evil 5 have seen increases of 50% and beyond. Dirt 2, one of the biggest titles AMD has pushed over the past year, has seen an also impressive 43% jump in performance. 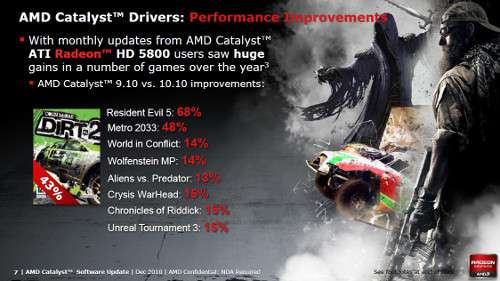 As mentioned at the outset, AMD introduced “CrossFireX Profiles” at the beginning of the year, and had plans to release those on a non-specific basis… essentially, whenever it felt like they were needed. That’s changing, as the company plans to amp up that schedule to weekly.

Unfortunately, these updates still come in the form of downloadable executables. I’d find it much more ideal if the Catalyst Control Center was capable of downloading and installing these updates within itself, as it’s inconvenient to have to go to AMD’s website each week to grab the latest versions. I’m sure this idea isn’t unknown to AMD, though.

In addition, an upcoming Catalyst release will spawn the introduction of official DivX acceleration, meant to be paired together with DivX’s “Plus Codec Pack”. AMD says that using this perfect blend will decrease CPU usage, reduce noise in HTPCs and enable playback on systems with less-than-stellar processors. 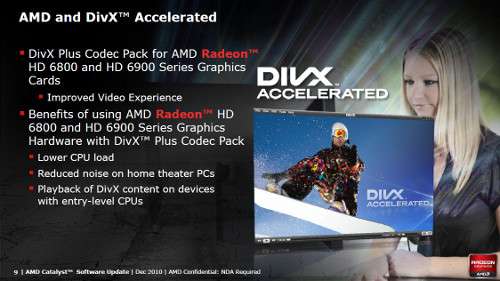 Finally, while the Catalyst driver has supported OpenGL 4.1 for a little while, it will “officially” support it with the next WHQL release. This will be appreciated by those who use workstation apps that heavily utilize OpenGL, or even gamers if a game supports it.

Over the years, both AMD and NVIDIA have made various improvements to their respective control centers, in order to add to the ease-of-use, usefulness and overall appeal of their drivers. For the most part, I tend to hate most control centers, as they’re just not that nice to look at, and can be counter-intuitive. Will AMD’s upcoming update change my mind? Well, it sure has potential. 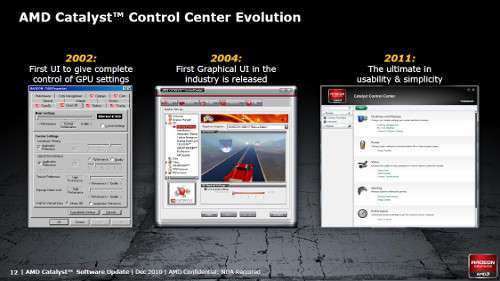 With the help of UI specialist Infusion, an upcoming Catalyst driver will feature a completely new interface, one that’s much cleaner, better-looking, and of course, easier to use. Similar in a way to the control panel found in Windows Vista and 7, the items laid out here should be common sense, and simple enough for the novice to use and robust enough for the enthusiast.

The biggest change is “one-click access” to all of the settings, and this to me is huge. I much prefer clicking on a single item than go into a sub-menu and then some tab, and I’m sure I’m not alone. In addition to what we’ll see from the get-go, AMD remains committed to updating the entire UI as there is need. It plans on scanning its own forums and others for user feedback, so if there’s anything you don’t like about it, be sure to get out there and post! 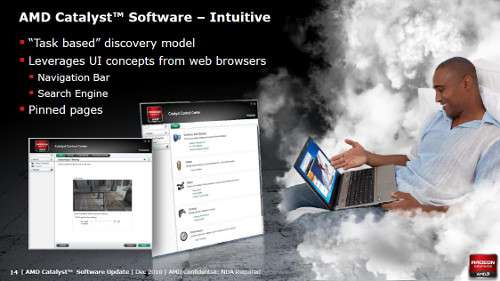 I’ve been referring to all of these changes being implemented into a “future driver”, but for those who want to see what’s in store now, a preview driver should be made available soon at Game.AMD.com. Once it is, we’ll post about it in our news, so stay tuned.