Towards the beginning of this year (during CES to be exact), AMD launched their highly-anticipated Phenom II processors, which at the time included only the X4 940 and X4 920. Prior to launch, we all had a fairly good idea of what to expect out of the new offerings, and for the most part, most of those assumptions were found to be spot on once the initial reviews hit.

Clock for clock, AMD lags a little behind Intel, and this is nothing new, and even AMD will admit to this. Because of this fact, though, AMD strives to remain competitive by scaling their prices to match or beat Intel’s comparative offerings. In the end, we all win, so even if AMD doesn’t deliver the fastest CPUs known to man, they’ve helped vastly by giving consumers great bang for their buck.

Many people appreciated this fact when “Dragon” first launched, and AMD was finally put back in a great position. Enthusiasts were beginning to take their offerings a little more seriously again, because although it’s been a long-time coming, AMD is finally releasing new models that are extremely overclocking-friendly, and we saw proof of this at CES with a staggering 6.8GHz overclock.

Closer Look at AMD’s AM3 Processors

But enough about the past… let’s talk about now. Although Phenom II just launched, AMD wasted no time in following-up with a few AM3 processors, two of which we’ll be taking a look at today. We’re a little late on getting this article up, so we won’t exhaust all of what’s new. What’s important to make note of though, is that AM3 processors are backwards-compatible with AM2+ and some AM2 motherboards.

AM3 boards are of course being made available as well, but AMD isn’t too keen on them right now, as there seem to remain un-ironed bugs. So unless you require DDR3 for some reason, you should feel completely confident in the fact that you’ll lose nothing by sticking with AM2+. 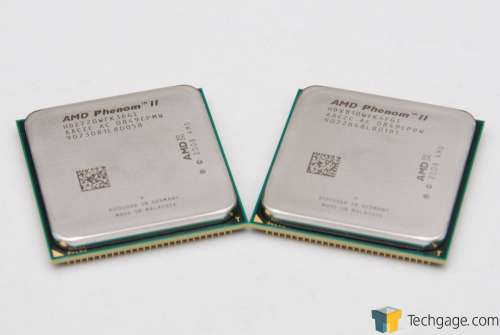 That last fact is one that AMD should really be commended for, because to be able to release a fresh design that remains completely compatible with motherboards that have been available for quite some time… is impressive. Anyone who jumped on the Phenom bandwagon when they first arrived to the scene are now able to simply purchase an AM3 CPU and be done with it. That’s a great thing.

This AM3 launch also brings about the first Tri-Core Phenom II’s, which include the X3 720 Black Edition and also the X3 710. The X3 720 BE is of course unlocked, so the skies the limit where overclocking is concerned, while the X4 810 might experience more difficult overclocking, given the bus speed is required to be raised for any gain. The small table below outlines AMD’s current Phenom II line-up, excluding two processors (X4 910, X3 805) which are not available to the public, yet.

One important thing to note is that the new X4 810 chip cuts down a bit on the available L3 Cache, so if you are a hardcore media buff and encode video often, you’d be wise to consider a higher-tier model with 6MB of L3 Cache. In some cases, you might actually see better gains by downgrading to the X3 720 BE, as it strangely enough contains just as much L3 Cache as the Quads.

We’re late enough on this article as is, so without further ado, let’s get to testing!