As I’m sure is obvious by now (I’d sure hope so!), AMD released its long-awaited Radeon HD 6800 series of graphics cards late last week. We of course posted an in-depth look at the company’s two launch models, the Radeon HD 6870 and HD 6850, and in the end, surmised that AMD has a winner on its hands. The reasons boil down to pricing, performance and of course, features.

Depending on your outlook on things, you may disagree, but there is a reason NVIDIA dropped the pricing on two of its most popular GeForce models a mere day before AMD’s much-touted launch. Thanks to that move, though, competition couldn’t be much more fierce, and as I mentioned in that article, it’s a great time to be a gamer.

Although I’m pleased with the amount of testing I was able to put both the Radeon HD 6850 and HD 6870 through (13 games!), a major time-related omission was CrossFireX testing. And believe me when I say that I hated to not have something in there, because from light initial testing, the results were beyond impressive.

That said, this article is going to focus primarily on the CrossFireX performance of these new cards, and not what’s changed with the architecture and feature-sets. For that information, I recommend perusing our launch article, as it’s all tackled there. For those of you who want a mind-blowing high-end gaming experience, read on.

Although multi-GPU technologies have existed for quite some time, neither AMD or NVIDIA offered the most stellar of solutions until very recently. In years past, the performance gain seen by pairing up two or more GPUs would never be a definite, but rather be on a game by game basis. Things have sure changed since, with both companies having refined their respective technologies with each new launch. We’re at a point now where multi-GPU isn’t just a niche anymore, but a real option.

According to the reviewer’s guide supplied by AMD, performance scaling with CrossFireX can reach heights of up to 1.99x, which in all regards, is mind-blowing. In the company’s internal testing, the 1.99x performance boost was seen in Far Cry 2, but it also saw impressive gains in other titles as well. The most lacking boost looks to be at around 1.60x, which for all intents and purposes, is still good. 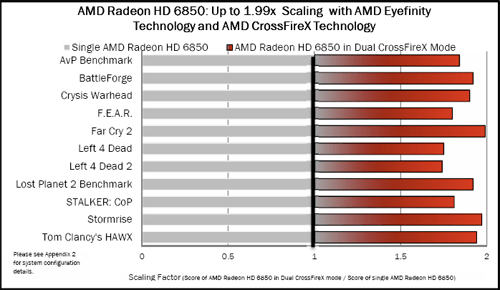 The problem I have with graphs like these, though, is that most of the games are just not that relevant. Far Cry 2, for example, was a crappy game (in my personal opinion) when it came out two years ago, and it’s a crappy game today… and one that very few people care about. Likewise, how many people do you know that play Stormrise? Or the original HAWX? Or heck… F.E.A.R., a game that came out a staggering five years ago? We’ll see if the same kind of boosts will be seen as we benchmark many current titles.

A common angle I discuss a lot in our content is the value proposition of today’s PC components. In everything from the CPU to the GPU, and even things like storage, you sure do get a lot for your money nowadays. Because of that, a lot of gamers, unfortunately for AMD and NVIDIA, could easily get by with a modest $150 graphics card, as chances are, the resolution being used is 1680×1050 or under.

It’s when things like anti-aliasing and other GPU technologies like DirectX 11 are brought into the picture that the situation might change. For those who demand the best graphical detail possible, but still run a modest resolution, a multi-GPU setup might still be a good idea. This can be especially true given that sometimes, the performance seen can exceed a much, much higher-cost single GPU part.

I often hear people say that multi-GPU simply isn’t needed in today’s PC landscape, but it’s clear to me that those people are A) not hardcore gamers, and/or B) not driving huge resolutions. With some of today’s high-end PC games, a resolution of 1920×1080 can really begin to drain a GPU, especially where AA is concerned. Things only get worse at 2560×1600.

I didn’t outright ask the question, “Who is CrossFireX for?”, but the previous statements sum up my thoughts on the matter. If you consider yourself a high-end gamer, and do use a rather high resolution, a multi-GPU setup makes more sense than ever. Pretty-well every motherboard out there that offers at least two PCI Express 16x (or 8x in dual mode) slots can utilize CrossFireX (unlike NVIDIA’s solution which requires an add-on chip, which many boards do not include), and because power consumption is far better than in years past, you might even be able to continue using the PSU you already have. 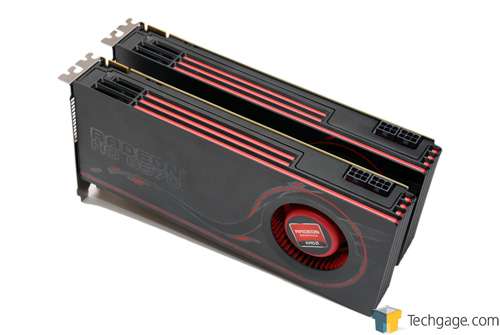 The best part of multi-GPU from both companies is that the scaling is constantly improving, so the argument of “high-end single GPU vs. mainstream dual-GPU” is becoming less of an argument at all. This is something we hope to elaborate on in our results here.

I just mentioned power supplies, so what kind of unit am I talking about? For either the Radeon HD 6870 or HD 6850, AMD recommends a 500W unit for a single card, or 600W for dual, with each of the PCI Express cables driving an output of at least 75W. For the HD 6850 in particular, where only one power cable is required for a single card, you only need two for CrossFireX. Not confident in the PSU you’re looking at? You can check out AMD’s official list of certified units, which might help you out.

Of course, we can’t dive into performance without talk of pricing, and fortunately for gamers, that’s another aspect that’s improved over time. The FPS/$ ratio has never been better, and if you are unable to purchase a second GPU at this point in time, you could simply pick one up now, and then another down the road no problem at all. Depending on how long you wait, that might even reap you the benefit of an even cheaper price.

AMD’s launch pricing is $179.99 USD for the Radeon HD 6850, and $239.99 USD for the HD 6870, and those prices seem to be holding steady at e-tail. If there’s one downside, though, it’s that the most popular brands have sold out since launch, so if you are looking for a Sapphire, ASUS or even XFX, you might have to alter your choice. That depends on your level of patience, of course.

Alright, enough of my blabbing! If you are unfamiliar with our testing setup and practices, I encourage you to check out the next page where we discuss it in full. Otherwise, head on over to page three where we’ll kick things off with Colin McRae: Dirt 2.