It’s been a little while since I took a hard look at where CrossFireX stands, and after performing all of this testing, and also our GeForce GTS 450 SLI testing last month, I am confident that there’s never been a better time to get into a dual-GPU setup. And considering some of today’s games prove glutenous even at 1680×1050 (I’m looking at you, Gothic 4), multi-GPU is even becoming a tease for those with modest resolutions.

Looking at things from the value perspective, AMD’s new Radeon cards in CrossFireX mode can offer an incredible FPS/$ ratio. Unfortunately though, a lot of it depends on the games you play, with some showing strong gains and others not so much. In the case of F1 2010, the gains were minimal, but with some others, the differences were massive.

If NVIDIA’s GeForce GTX 480 retails for $500, which it does, how could the value proposition of dual HD 6870’s be ignored? Combined, two of those cards cost $480, and as seen all throughout our testing, more often than not, the GTX 480 can only hope to keep up. In fact, the performance seen is so good, that it might even be difficult for the rumored GTX 580, which is touted as being 20% faster than the GTX 480, to make much of a difference. 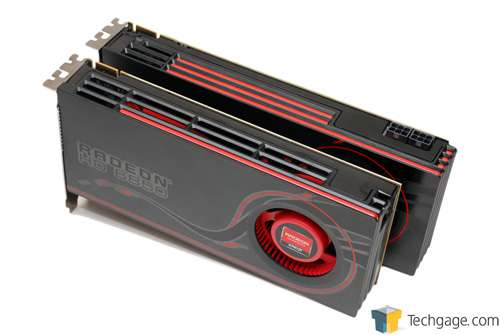 It is important to note, though, that the fact that AMD’s latest cards, when combined in CrossFireX, beats NVIDIA’s highest-end offering isn’t much of a surprise. After all, NVIDIA’s card came out this past spring, so AMD had just over six months to come out with something that would beat it. So, in that sense, the kind of performance we saw was almost expected. But that doesn’t make it less exciting.

One regret I have here with testing is that for the most part, we don’t have duplicate GPUs for the sake of CrossFireX and SLI testing. That’s something that will change, especially now that both technologies are far more relevant than ever. We never made it much of a priority in the past to benchmark dual GPUs, but being that it’s so accessible today, I think it’d be a good idea to start.

Speaking of maturity, let’s take a look at the raw gains seen when using CrossFireX mode across the games we tested today. These are from our 1920×1080 results, and for emphasis, I bolded the gains that were especially impressive.

Dirt 2, Just Cause 2 and Metro 2033 all exhibited incredible gains with CrossFireX, and though we didn’t reach AMD’s 1.99x ballpark figure, we did get as high as 1.98x, which is without question impressive. Outside of those games, the gains were less impressive, although we did see a fairly respectable 1.52x gain in Mafia II with the Radeon HD 6870.

On the HD 6870, neither F1 2010 or Gothic 4 saw much of a gain, but it was the opposite case with the HD 6850s. As far as multi-GPU configurations go, even today, mileage will definitely vary. Of course, one glaring result was with Dead Rising 2, where due to the lack of proper CrossFireX profiles, we actually saw rather stark decreases. AMD stated that this will be fixed soon.

With all we’ve seen, could I outright recommend CrossFireX with these new cards? I think the results speak for themselves. While we didn’t see extremely impressive gains across all of the games we tested, the games we did see gains with were simply outstanding. Still, there is a reason to be wary of any multi-GPU configurations, and it’s especially seen with Dead Rising 2. Not all games will work well right out of the box with multiple GPUs, and whether or not that’s the fault of the GPU vendor, or the fact that the game simply doesn’t need so much graphical horsepower, it will depend on the title.

While I don’t consider CrossFireX to be bleeding-edge technology at all, because as mentioned before, it’s never been more mature, it is just one thing to keep in mind. If you want wicked-fast performance and don’t mind the possible occasional game not working so stellar, and potential tweaking that might need to be done, then this is a great route to take, and personally, it’s one I’d leap at no problem.

For me, I look at the value prospect, and with NVIDIA’s GTX 480 at $500, and CrossFireX’d HD 6870’s at $480, it’s hard to ignore. Most of the titles that saw minor gains didn’t even truly need major ones, but in the cases of hardcore games like Metro 2033, we saw an unbelievable 1.82x gain with AMD’s dual-GPU configuration compared to the GTX 480.

Of course, there is just one other thing to consider. Rumor has it that AMD will be launching its HD 6900 series in a month, and while the HD 6800 didn’t offer a revolutionary new design, this upcoming series will. Pricing is up in the air, but it looks like the HD 6900 series will offer almost twice the performance of these current single-GPU cards, meaning, no CrossFireX.

What that means is, if a game we tested with for some reason can’t take proper advantage of two or more GPUs, then a single monolithic chip such as the HD 6900 might deliver the performance we had hoped to see. Until it gets here, it’s hard to speculate. If you’re in the market now for a high-end AMD setup, I’d still encourage CrossFireX, because when the HD 6900 does get here, nothing says that the pricing isn’t going to be completely on par with CrossFireX’d HD 6800s. Plus, with all of the games out right now, it’d be hard to wait another month or so for either AMD’s or NVIDIA’s follow-up.