To retain modest pricing, it’s common to see lower-end graphics cards equipped with either DDR2 or DDR3. That design choice, though, can have a major effect on performance, something that’s proven twice over with AMD’s Radeon HD 5550 and HD 5570, both of which have just been upgraded with a move to GDDR5 memory.

In the early months of 2010, it became clear that AMD had the intention of not just painting the town red, but keeping it that way for a while. It accomplished this with not just one GPU launch, and not even two… but five, spanning across a month and a half. Of these, most were budget models, from the Radeon HD 5450 up to the HD 5670; the exception being the mainstream HD 5830.

On February 9th in particular, AMD launched the HD 5550 and HD 5570, also known as Redwood LE and PRO, respectively. At that time, the HD 5570 seemed to be the main focus, because for months past that launch, I had forgotten all about the HD 5550. In a rarity, AMD didn’t send out samples for that model, so it itself didn’t seem to value the card that highly.

Last month, I took a look at Sapphire’s version of the card, dubbed “Ultimate”, and I could begin to understand the reason AMD kept so quiet on it. The card for the most part wasn’t that bad from a performance standpoint, but when a card that costs about $20 more is about twice as fast, it makes you scratch your head with regards to its existence.

Things changed a little bit a couple of weeks ago, though, when AMD came to us and said that it would be upgrading both the HD 5550 and HD 5570 to use GDDR5 memory in lieu of the DDR2 and DDR3 the cards were equipped with before. It’s clear to me from personal tests in the past that faster and more efficient memory on a graphics card can make a sizable difference, but its more so an issue on budget cards, as mainstream cards generally already use the best memory available.

The big question of course is whether or not upgrading a sub-$100 GPU to GDDR5 is worth the added expense. After all, I didn’t recommend the original HD 5550 given it was priced just $10 – $15 lower than the HD 5570, but was much slower. And as the cards are “budget”, it’s hard to pack in all this top-end technology and keep things that way.

According to AMD, the pricing for the updated cards isn’t going to change from current market values, so that’s reassuring. This could have been made possible due to GDDR5 price-drops, or the fact that AMD is only packing in 512MB of the stuff, compared to the usually-included 1GB. On budget cards, 1GB is very rarely ever touched, so the move to less but much faster memory is a no-brainer.

For those looking to pick up either of these two models, the introduction of GDDR5 is a great thing, even if the performance increase is minimal (hint: it isn’t), thanks to the fact that pricing isn’t supposed to budge. With GDDR5, the memory speeds for both cards increases also, which I’ve reflected in our model round-up table below:

As you can see, there are no differences in core clock speeds between the old and the new, but the memory of course has seen a healthy bump, especially on the HD 5550. Both of the cards use the exact same GDDR5 and exact same speeds, and while I’m on this “exact same” kick, let’s take a look at the cards we were given, straight from AMD: 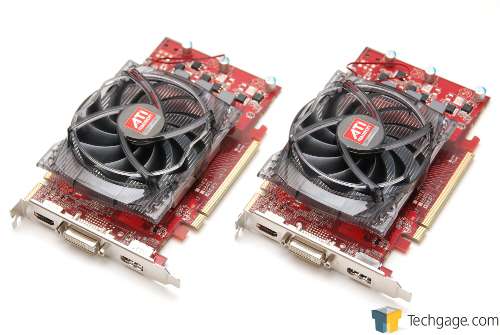 The fact that the HD 5550 and HD 5570 were close in design was never a question, but to receive both models looking 99.99% the same was kind of humorous. The absolutely only difference between the two cards was the model code on the back, and it’s not even a human-readable one, so these were like receiving a CPU that had its IHS printing rubbed out. Fun stuff!

A shot of both the GPU itself and GDDR5 IC’s can be seen in the photo below, and is pretty self-explanatory: 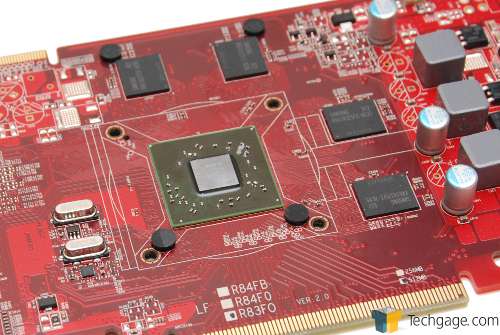 The samples we were sent are those of reference design, so vendors that sell AMD’s cards don’t have to stick to them, but can use them as a guideline. Regardless, since I had the cooler off anyway, I took a picture to help show it off. As you’d expect of a budget card, the cooler is rather uneventful, but to be fair, that’s fine. These cards don’t get that hot to begin with, so anything bigger or better would just tack on needless dollars to the price. 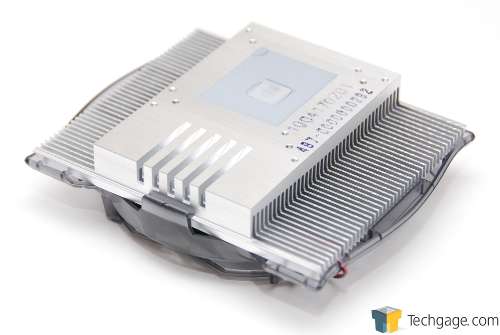 Along with this launch, AMD is again stressing the importance of its STREAM technology, especially with commercial applications such as CyberLink MediaShow and ArcSoft MediaConverter, but we’re not going to touch on any of that here. Testing with those applications is something I’m long overdue for, so I plan to test them out, along with others, and dedicate a special article to them. If you have any suggestions of other things to include in such an article, please feel free to let me know.

With our look at the updated cards out of the way, we can move right into testing. Well, after a look at our testing methodologies, of course.