During the launch of AMD’s “Redwood” products earlier this year, most of the attention was focused on the Radeon HD 5670 (Redwood XT) and Radeon HD 5570 (Redwood Pro). Until recently, I had forgotten all about the Redwood LE, also known as the Radeon HD 5550. My friendly reminder came in the form of a shipment from Sapphire, straight from Hong Kong, which included the company’s “Ultimate” edition of the card.

As the model name suggests, the HD 5550 falls just under the HD 5570 and above the HD 5450. Based on current market pricing, most HD 5550’s can be had for around $75, while HD 5570’s are closer to $85. With some effort, you can get either model of the card for much less than their respective values there, but for the most part, the difference between the two models is about $10.

Sapphire’s “Ultimate” edition of the HD 5550 will run a little bit higher, at around $90, which is about $10 higher than its reference design. Yes… to be clear, the price will be almost the same as the HD 5570. So what’s the point? Well, the “Ultimate” card is completely passive, and in our tests, it does its job very, very well. Think of it as the Vapor-X for the low-end.

To help predict the HD 5550’s performance even before it’s installed, we can take a brief look at the table below. As you can see, the HD 5550 has slower overall clocks than the HD 5570, and also drops off 20% of its stream processors. Based on these figures alone, we’re likely to see a rather noticeable decline in performance. Just what is the point of the HD 5550 even existing, then? I’m trying to figure that out myself.

But before I go all hater on this card, let’s take a look at all of its aspects, including performance, before drawing up some conclusions. As you can see in the photo below, the card isn’t a low-profile offering, but rather is designed from the standpoint that improved cooling is a good thing. And it is, especially if you’re dealing with an HTPC. You’ll also note the lack of a power connector, which isn’t unusual for lower-end GPUs. 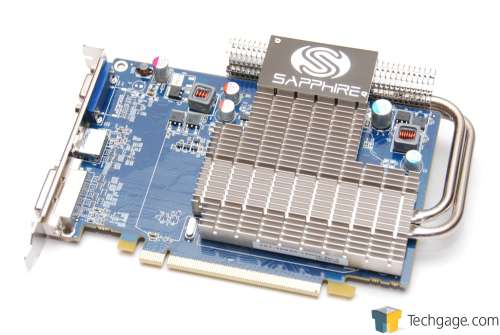 In taking a look at the card from a different angle, the overall heatsink design becomes clearer. The front of the card doesn’t extrude outward much at all, which means that it won’t block any other cards you might install in the next slot down. The backside is a different story, though, and depending on your plans, you can either consider this to be either a dual or single-slot cooler. 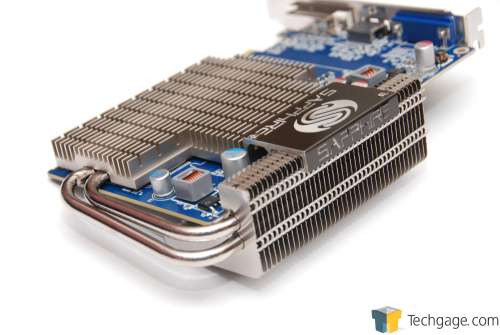 The reason I say that is that for most people, the heatsink on the back of the card isn’t going to get in the way. On most current motherboards, there’s usually a PCI-E x1 slot directly above the top PCI-E x16 slot, and as has been my experience, it’s usually not occupied. If it is, there’s still likely to be no issue, because most x1 cards are of a low profile variety, and as you can see by the back of the card, there will be a sizable gap between the chassis and the heatsink, so any card should fit fine. In the worst case, an x1 card you install might brush up against the back of this heatsink, but given the overall temperatures of the card, there wouldn’t be anything to worry about. 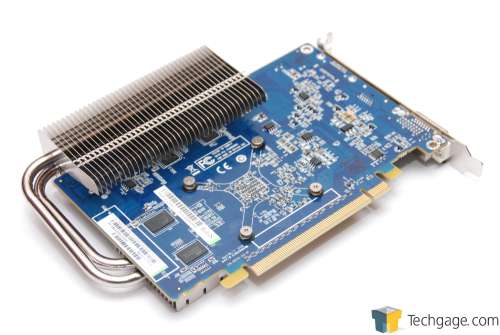 Sapphire’s Ultimate might not be the best-looking card out there, but given its purpose, the cooler definitely fits with the overall scheme. As we’ll see later, you won’t ever have to worry about the card overheating, either. It’s a passive cooler, but a very effective one.