by Rob Williams on February 9, 2010 in Graphics & Displays

AMD’s clear goal at the moment is to finish rounding-off its HD 5000-series line-up in advance of NVIDIA’s Fermi launch, and so far, it’s doing a good job. It’s continuing its success in this goal with the release of the $80 Radeon HD 5570, a card that’s designed to offer stellar media capabilities along with reasonable gaming performance.

Last Thursday, AMD introduced the newest member of its HD 5000-series, the $50 – $60 Radeon HD 5450. From its price-point alone, it’s easy to understand which market AMD was aiming for, and where that’s concerned, the card impressed. So much so, in fact, that we awarded it our Editor’s Choice award. For the money, the HD 5450 is packed and does well to keep NVIDIA at bay… for now.

In our launch article for that card, we mentioned that more cards were en route, and right on schedule, here we are with the HD 5570, a model that pretty-well falls right in between the HD 5450 and HD 5670. This card is set to retail for around $80, and given its specifications, its looks to be a superb buy when compared to the HD 5450. Sure, it may cost 60% more, but it’s also about 300% faster.

So who exactly is the HD 5570 designed for? It’s tough to be too precise about its market placement, because even the HD 5670 couldn’t be considered a true gaming card, and here we are with a model even slower than it. It’s also impossible to call it an ideal HTPC card also, since any HD 5000-series card could be considered as such, even the $50 HD 5450.

AMD places the HD 5570 somewhere in the middle, where the card is far more capable than the HD 5450 gaming-wise, but is still priced well below the $100 mark. For all intents and purposes, judging simply by the cover, this card would make a great HTPC card if some gaming is in the plan, as the actual form-factor of the card is much, much smaller than the HD 5670. 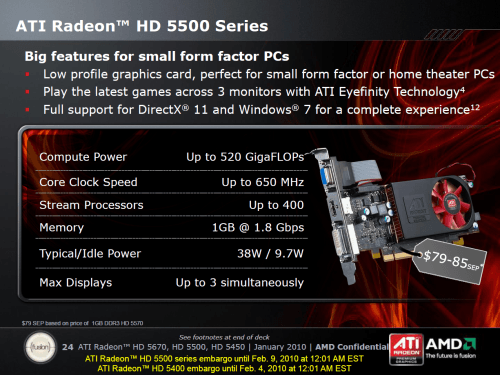 As seen in the slide above and the table below, the HD 5570 is placed well above the HD 5450 in terms of overall capabilities, with 5x the stream processors and a much wider memory bus. The memory clock has also been given a minor boost, of about 12%. Though the HD 5570 can be configured with 512MB of GDDR, chances are good that the most common configuration will be 1GB.

For our testing pleasure, we received the reference card straight from AMD, while Sapphire sent us its version of the card as well. From almost all perspectives, both cards are identical, from the specifications to the PCB design to the cooler layout. Because these cards are so exact, we performed our testing only with Sapphire’s card. 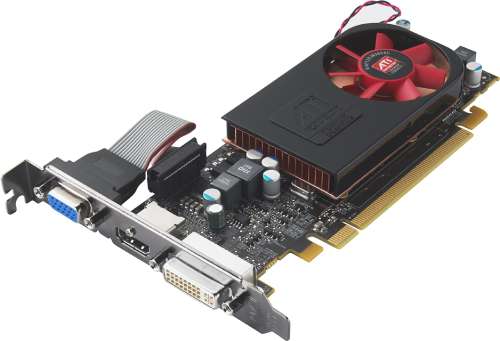 Like most other current HTPC-friendly cards, Sapphire bundles its cards with two different “LP” (low-profile) brackets, in case you plan to install the card into a very, very small chassis. 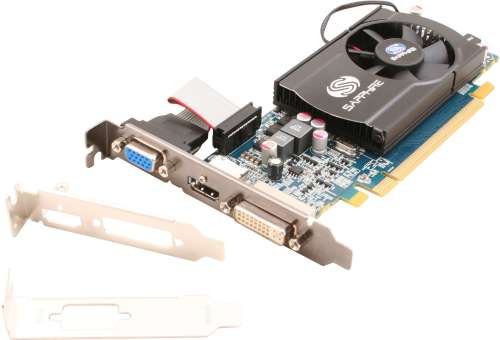 Compared to the HD 5450 reference design, the coolers seen on the HD 5570 could be considered boring. But, looks isn’t the main goal here, but rather performance and cooling-ability. The fans on these cards don’t get all too noisy during full load, but I still wouldn’t be surprised to see passive versions become available from certain vendors in the near-future.

On the following page, we’ll be taking a quick look at both our test machine specifications and methodologies, and then we’ll begin a look through our results starting with Modern Warfare 2.