The OS used in testing is Ubuntu 17.04, which is as out-of-the-box as we can make it. That means that the Nouveau driver is used for graphics (not that it should matter for CPU tests), and no unneeded software or services are installed. An exception: for the sake of improved AMD Ryzen support, the kernel has been upgraded to 4.10.1.

Most of our Linux testing is performed with the Phoronix Test Suite, which makes it ridiculously easy to benchmark a huge number of tests in one go, to let us, as Ronco famously said, “set it, and forget it!” Well, “forget it” until the next test needs to be run, anyway.

In addition to PTS, GeekBench is included for an overall performance look, while Blender and HandBrake are used for real-world testing. 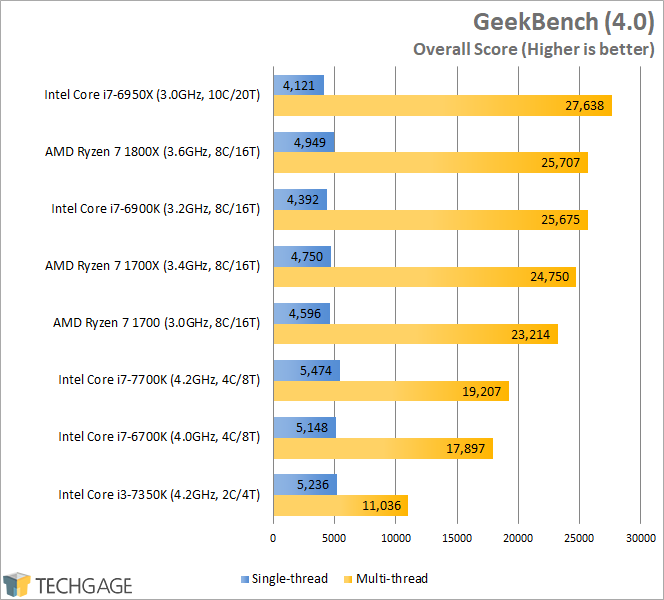 Both sets of results shine Ryzen in a great light here, with the single-threaded test aligning the chips close to Intel’s 8- and 10-core competition. It’s hard to beat Intel chips clocked at 4.20GHz, but pile on more cores, and Ryzen 7 can overtake those quad-cores with ease.

Compared to some other synthetic benchmarks tested in this article (Cinebench, POV-Ray), GeekBench has proven quite generous to Ryzen to put it so close to Intel’s big guns. 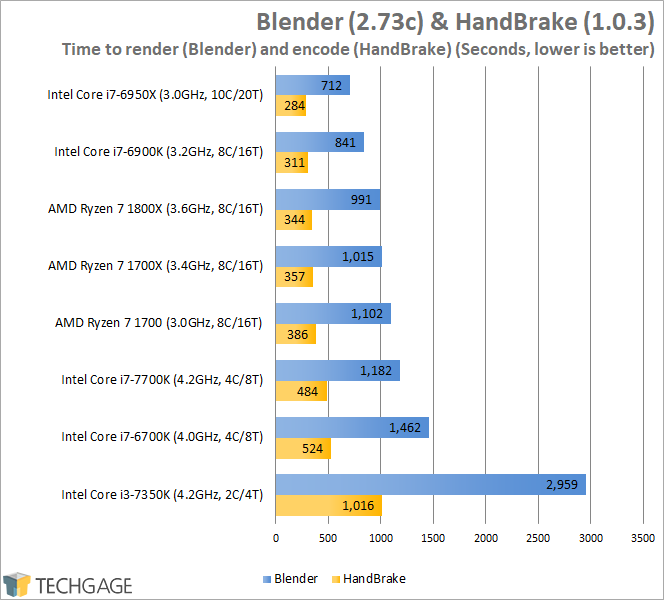 If you’re planning to use either HandBrake or Blender under Linux, then you’re going to love Ryzen. All three Ryzen 7 chips best Intel’s current quad-core champs, with the 6900K using its strong IPC to pull ahead of the 1800X.

How do these results compare to the same tests performed in Windows?

There’s no easy answer to that question, as both sides trade blows. An interesting result here is with the i3-7350K, which somehow performed much better with the Windows version of Blender, than the Linux one. At the same time, we have results like the 1800X, which took the exact same amount of time between versions.

What ultimately matters, though, is that all of the CPUs scale the same between versions. Both sets of results put Ryzen 7’s three chips right behind Intel’s top dogs.

(Additional results from our PTS testing can be found here.) 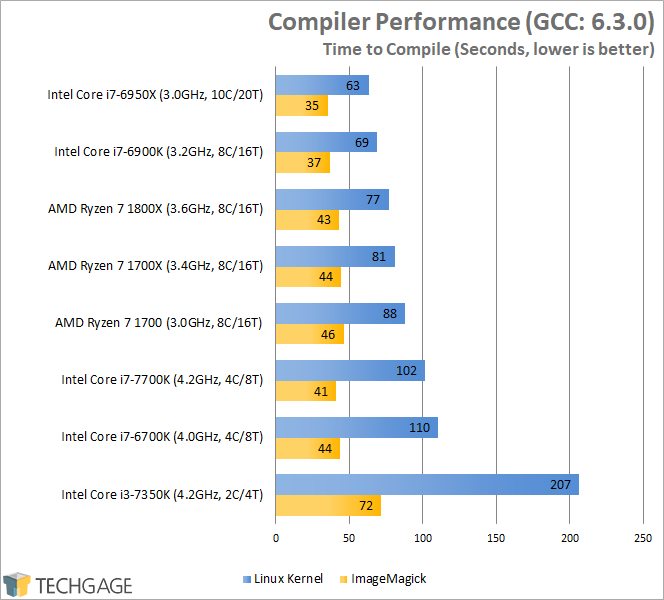 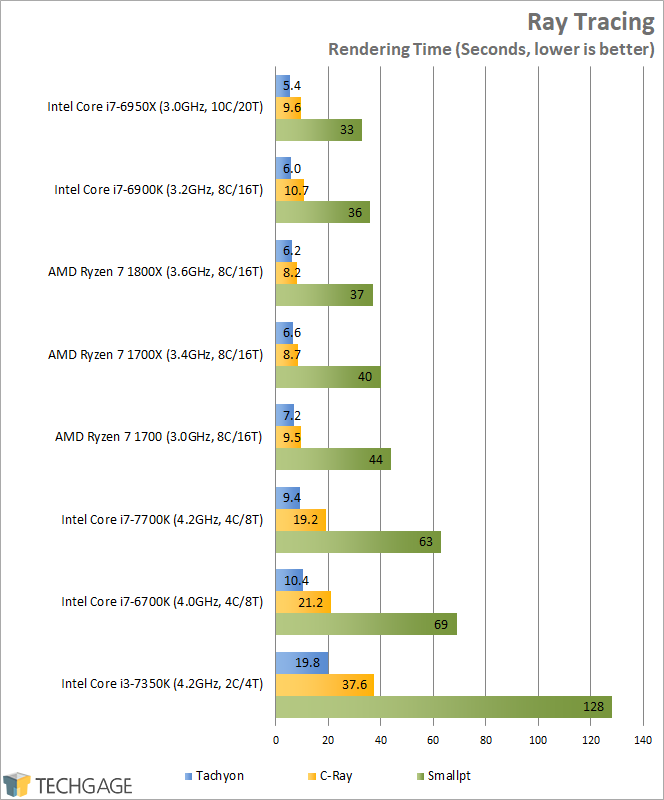 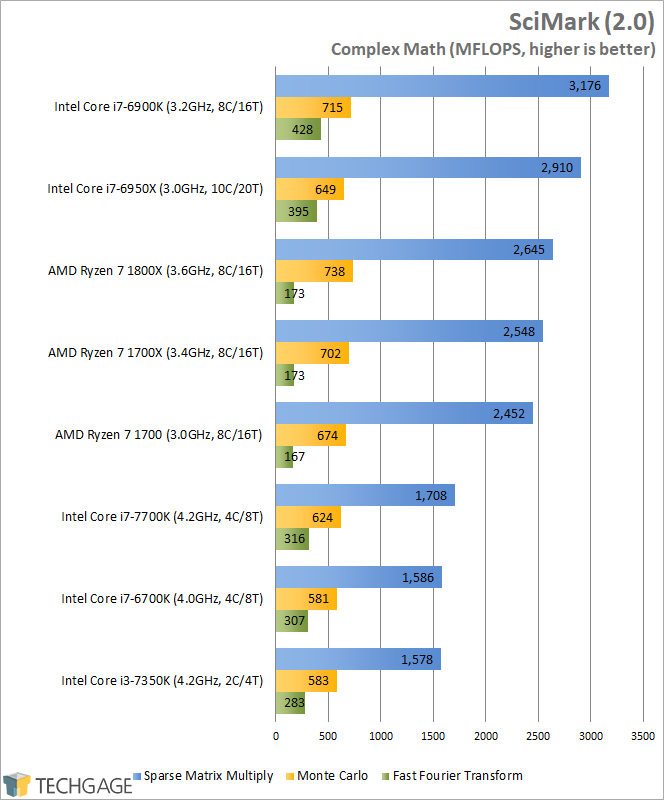 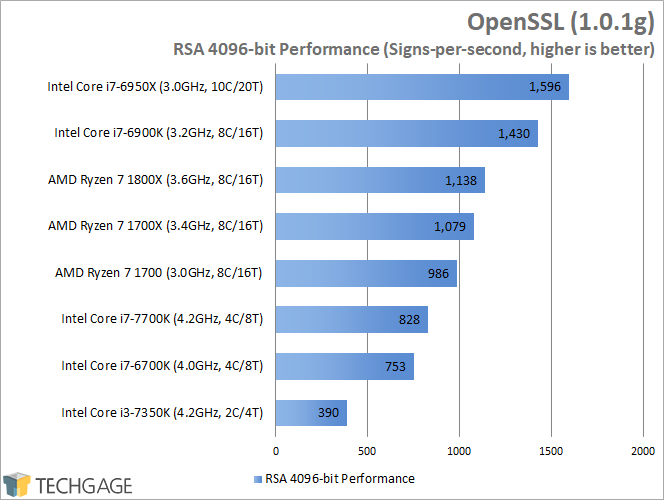 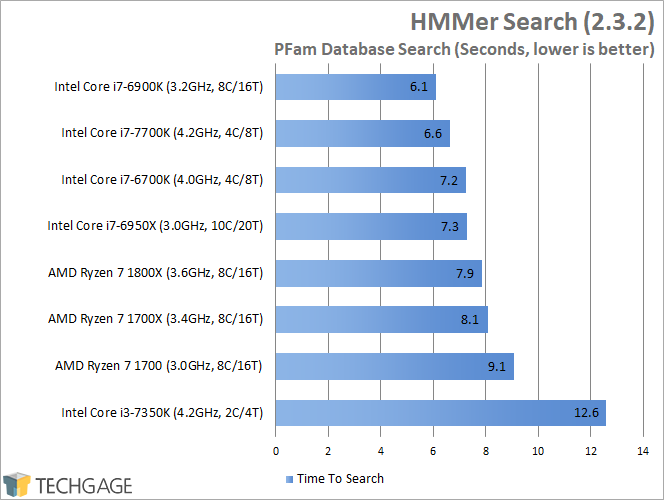 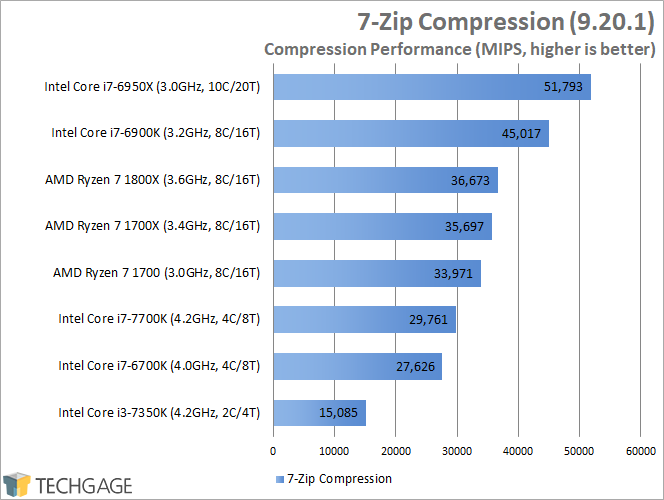 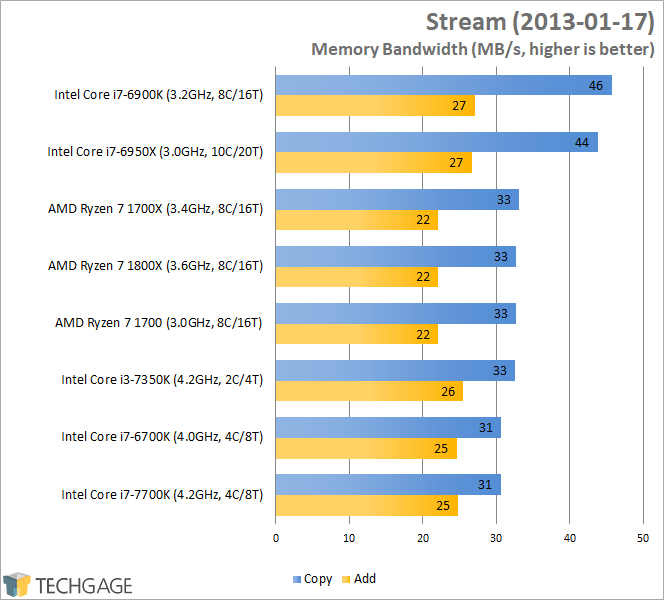 In every single one of these tests, aside from the single-threaded HMMer, even the lowbie Ryzen 7 1700 placed ahead of Intel’s Core i7-7700K. Memory bandwidth isn’t quite as high as what we saw on Windows, but it scales the same – at least based on the Copy result.

On the Sandra performance page, Ryzen showed some serious strength in encryption, and through Jack the Ripper, we see more of the same strong performance, with all three Ryzen CPUs besting the Intel quad-cores, falling short only to the 6900K and 6950X, and only in the Blowfish test. DES is too insecure to be used nowadays, and it’s too bad, since Ryzen blows away its competition there.

Overall, a great showing from Ryzen through all of the tests. The 1700 still looks to be the best bang-for-the-buck, as it beats out the 7700K in every single test except the two single-threaded ones – which was to be expected.