An In-depth Look at Steam for Linux

Though still in beta, Valve’s Steam client for Linux is stable, fast, and from what we can tell, matches the feature-set of the Windows and OS X clients 1:1. That being the case, there felt like no better time than the present to dive in, give a tour and relay our experiences with both the client and a slew of games.

As a long-time Linux user, I admit that I’m still in relative awe that Steam for Linux is, in fact, a reality. The state of gaming on Linux has never been ideal, with most gamers having to mess around with solutions like Wine or virtual machines – neither being ideal vs. a native client. In recent years though, things have been on the upswing. Take the Humble Bundle, for example, which insists that games sold are available for Linux (alright, most times). And now, with Steam for Linux – what more proof do you need that this is a viable gaming platform?

The best part about Steam on Linux, is that despite it still being in beta, it’s clear that the developers at Valve have put a lot of time and effort into making sure that this variant doesn’t lack in visual design, stability or features. On the surface, Steam for Linux looks identical to the client on competing platforms.

At the moment, Valve recommends using Ubuntu 12.04 LTS for the best experience, and in our quick testing across multiple distros, we’d agree. As mentioned last month, my experiences with Steam under Gentoo have been hit or miss, though all issues are related to the games, not the client itself. I’ve had better success with Linux Mint, though I’ve read success stories from those using Fedora and Arch as well. If you don’t run Ubuntu or any Ubuntu-based distro but want to give things a test on your own, we’d recommend heading to Google for a guide, because many exist for multiple distros.

Installation of Steam under Ubuntu mimics the process for Windows. You must head on over to the official download page and grab the “steam.deb” installer file. If you’re already in Linux, this will be default; if not, you’ll have to click the Linux link under the big green button. Once downloaded, you can simply double-click it, which will bring up the Ubuntu Software Centre. You then click “Install”, type in your password, and within a minute, your client will be updating and readying itself for first load. 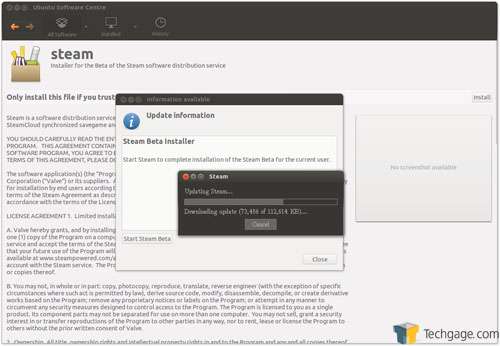 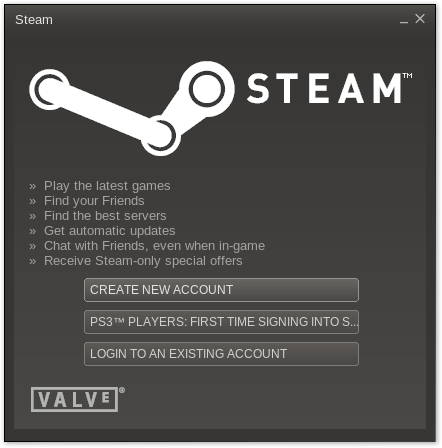 After logging in, you’ll be greeted to the main interface: 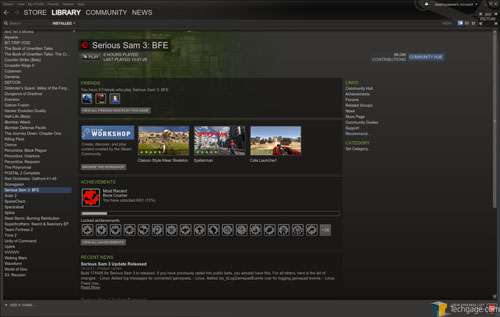 Overall, it looks no different to the Windows client, with the exception of the fonts in both the game box and certain areas to the right being a tad larger for some reason. Aside from that, when compared to the Windows version of the same screen, we spotted no single difference.

In Windows, all of your installed games will be located inside of the program’s actual install folder (by default), whereas in Linux, Valve chose to store them inside the user’s home folder – the right choice for the sake of ease and prevention of permissions issues. In Gentoo, this folder was /home/username/.steam, whereas in Ubuntu, it was /home/username/.local/share/Steam. If you’re not exactly sure where yours is, simply trying to install a game will tell you: 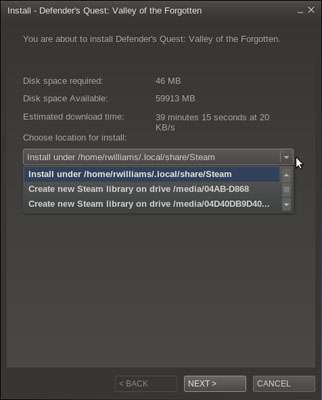 You’ll also notice that the option to install to other drives is presented. In order for this to work, the drive needs to be formatted using a Linux filesystem, as it will adhere to the execute permissions that are needed. Unfortunately, this means that an NTFS drive cannot be used for this purpose.

Once a game is downloading, you’ll be able to monitor its progress by clicking on the small menu under Library and switching it to Downloads: 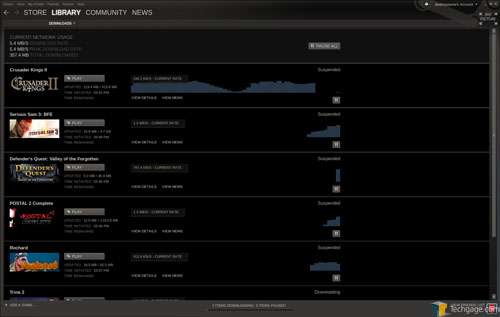 On the topic of that menu, an extra entry is included in the Linux client, “All Games”. This lists all of the games that you own through Steam, including those supported for Windows and Mac OS X. This does not mean that you can install and run them through Linux. Because you own the games, it makes sense to list them, but it sure is a tease. 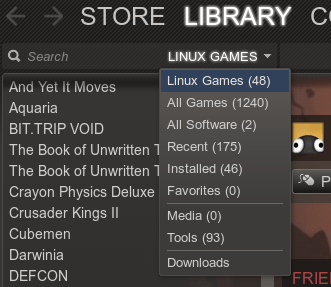 To give an idea of how the visual design of the Windows client carries over to the Linux one, have a look at the friend’s list:

It looks just like it would under Windows. It may seem easy to port software over from one platform to another and retain simple visual aspects like this, but believe me, it isn’t. Valve is to be commended for its work here.

There’s been word floating around that Steam games have the potential to run smoother on light-weight desktop environments, but in quick testing using Serious Sam 3: BFE, we couldn’t find definitive changes between using Unity, KDE or Xfce. We plan to do more testing in the near-future, however, once we find a proper benchmarking solution (Dear Fraps: Come to Linux).

Where desktop environments are concerned, one I’ve never cared too much for is Unity, and a perfect example of why is illustrated in the shot below: 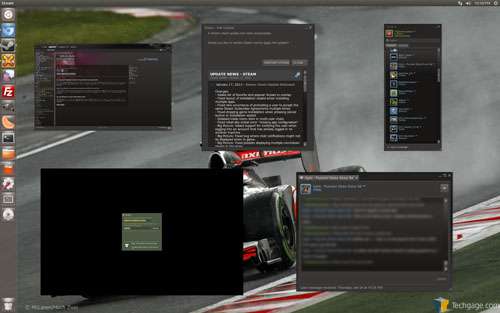 Because Unity encapsulates all of the sub-windows within an application to a single icon in the Unity bar, navigating an app like this, which could have many different windows open at once, can be a chore. Instead of simply being able to click on the task bar for whichever element you need, you’ll have to instead click on the Steam button and then choose the appropriate window from among the rest in this “All View”.

As much as I hate this implementation, this isn’t meant to be a hit on Unity, because I’m well-aware that some may actually prefer this sort of implementation. For Windows users familiar with Steam, this change might take some getting used to.

As we’ve known for a couple of months, Valve is planning to release a Linux-based game console in the near-future, so it’s of no surprise that Big Picture mode works beautifully with the current Linux beta. Overall, it looks identical to the Windows (and presumably Mac OS X) version, and doesn’t seem to forego any obvious functionality. 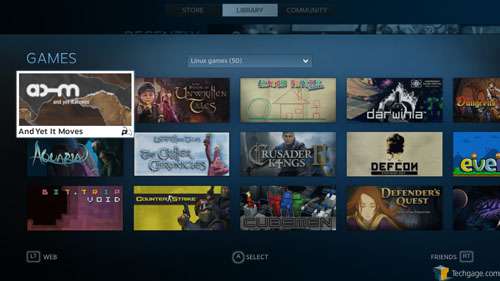 I did however experience oddities with my gamepad of choice, the Xbox 360 controller. The mapping was way off, but thankfully it only took a minute of using the configurator to fix that problem. Once solved, Big Picture was a breeze to use. 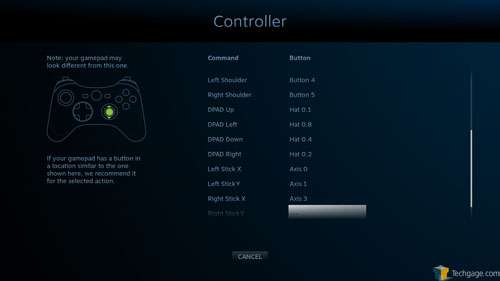 The only issue I experienced with Big Picture also plagues the Windows version: games that have launchers. A good example is Trine 2. Instead of simply going into the game when I chose it, I first had to fiddle with the launcher to click “Start Trine 2“. Unfortunately, this required a mouse. As Big Picture matures, these issues should go on the decline. Without question, it’s something that developers should take into consideration.

As things stand right now, Steam for Linux is stable. Every feature I attempted to use worked just fine, and the only issues I encountered were rare, and easily remedied with a quick restart of the client. For example, there were a couple of occasions where I’d receive a “The selected filesystem does not allow executing files.” error when trying to install a new game, and also a “Steam is signed with insufficient credentials” which came out of nowhere. Again, restarting the client got rid of these errors, and I’d suspect they’ll be no more once the client comes out of beta.

With all of this talk of the client out of the way, let’s get into the fun stuff, shall we? The games!