Pretend, for a moment, that you have no idea what this article is about. Just release all thoughts. Now, what’s the first thing that comes to mind when I say, “It’s the sexiest desktop environment around, but frustrating as hell!”?

If you said anything other than ‘GNOME 3’, you are either a chronic liar or one of the few people, like me, who kind of like it. Wait… did I just say I ‘kind of like’ GNOME 3, when I never liked GNOME 2? I think I did.

Alright, let’s face the facts. GNOME 3, since its release, has faced an insane amount of backlash, and perhaps for some good reason. First, it’s nothing at all like GNOME 2, which is part of the reason I like it. Second, rather than offer its users a lot of flexibility and customization options from the get-go, the tweaking-ability here is about as minimal as it gets. 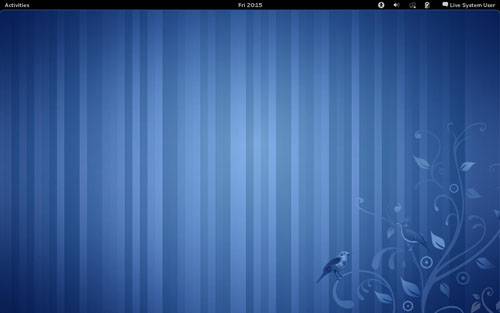 In fact, most of GNOME 3 itself could be called ‘simple’. There are no minimize and maximize buttons in a window title, no traditional applications system menu, and little in the way of UI features that take up precious real estate. But at the same time, GNOME 3 succeeds in becoming one of the most polished environments out there in terms of functionality and aesthetics. Simply put – it’s gorgeous.

At a fresh desktop, you’ll see something similar to the Live CD desktop shown above. There are no desktop icons, and no immediate functions to take advantage of. The top of the screen consists of a thin black bar with the day and time shown in the absolute center, and various system icons and your user information to the right.

Getting started with GNOME 3 is as simple as hovering over ‘Activities’ in the top-left corner. Doing so will result in this: 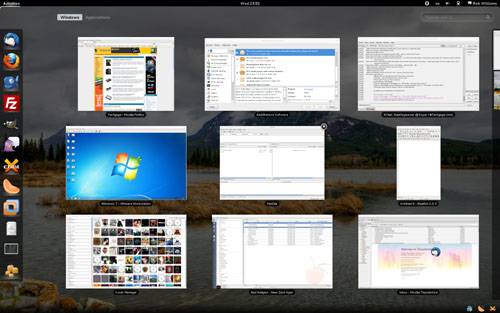 There are a couple of elements to make note of here. First, the dock to the left is where both open applications and static launchers are kept. The underglow behind certain icons denote the fact that the application is open. As you open more and more applications, this dock will begin to shrink down in size to accommodate the extra icons.

At the bottom right is a system tray where applications capable of minimizing straight to the tray can be found. In this shot, Xchat, Clementine and VMware are located there. As you’d expect, these can be right-clicked as normal to access whichever options the respective application has to offer.

The prominent feature of this screen is the cascading of open applications that are not exclusively minimized to the system tray. The goal is to make it easy to switch from one application to the next, and considering you have a lot more to look at than just a simple application icon as you would with an alt-tab, it should be easier to choose whichever application you need and then get on your way.

The last element in the screenshot above is found to the right; multiple desktops. With a quick click and drag of an application in this overview screen, you’re able to drop it into an alternate desktop. If you use the second desktop, a third will open, and so on. The animation and process of doing this is completely fluid, and highlights the attention to the aesthetic value of GNOME 3. I had wanted to include a screenshot of this feature in action, but unfortunately no screenshot tool I had could properly capture it.

Overall, I’ve come to like the ‘Activities Overview’ screen quite a bit, because with one quick swipe of the mouse, I can see my entire PC’s goings on, and with another, I’m right back to my work. This ties into the reason I like GNOME 3 so much, but before I go on, I will admit that I’m not like most other users. 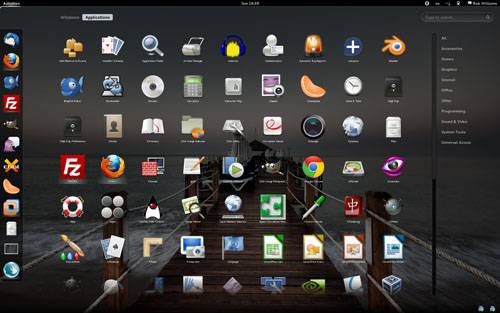 The first time I used GNOME 3, I hated it. Within fifteen minutes of using it, I was about to give up on this review. But as I began to use and understand it, I realized that because of the focus on hiding things in the background, I was able to better focus on work. I didn’t have instant messengers blinking in the corner of my eye, for example, acting as a distraction, but rather they were behind the scenes doing their thing while I worked.

The easy solution in another environment is to simply log off, but for business purposes I can’t. GNOME 3 gives me the best of both worlds – I can keep an eye on my IM when I need to, but not let it distract me while I’m trying to focus.

At the same time, the feature that makes it easy to focus becomes a detriment when you are working on a lot of things at once. In particular, if I am working on editing a bunch of photos, it’s tedious to have to alt-tab or use the Activities Overview to get back the program I need, rather than just clicking on a taskbar. Coupled with the fact that there are no desktop icons in GNOME 3 by default (it requires a tweak), I found myself getting a little annoyed with having to load up the file manager anytime I wanted a file on the ‘desktop’.

GNOME 3’s design is not going to appeal to everyone, that’s for certain. For those who enjoy tweaking their OS and don’t mind loading up a command-line, there are a ton of tweaks out there that can ‘restore’ certain bits of functionality to the desktop that were lost with the transition from 2 to 3. I didn’t test out any of these during my testing as nothing drove me so bonkers that I felt I had to, but from my understanding, many are very easy to pull off, and a simple Google search should help you fix what you need. 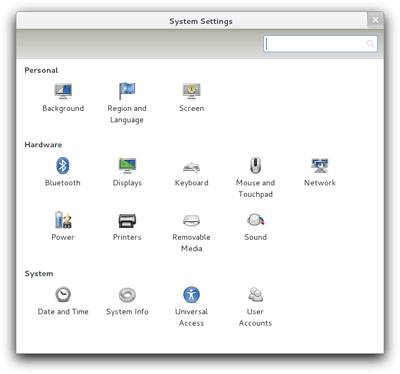 What configuration GNOME 3 does offer can be found in the ‘System Settings’, which can be found by clicking your name in the top-right corner or by going into the applications list. Here, the available options don’t look too far different from GNOME 2, though because of all the minor things taken out in GNOME 3, a similar set of options seems even more paltry.

In some ways, the simplicity is nice, but in others, there is a lot lacking here. You are unable to change the overall theme or window design, so for that reason everyone’s GNOME 3 install is going to look about the same. There are no options here to restore desktop icons, nor restore the minimize / maximize buttons. Again, there do exist tweaks out there to fix that functionality, and apparently the GNOME developers feel most people won’t mind loading up a terminal to tweak rather than use a simple GUI tool.

Another tweak-fixable quirk is having to hold ‘Alt’ while clicking on your username in order to see a ‘Power Off’ option rather than a ‘Suspend’. Above all, this seems to be one of the biggest issues people have with GNOME 3, perhaps next to the lack of minimize / maximize buttons.

As I discovered a fair number of bugs with Ubuntu’s Unity during my testing, I half-expected to run into the same sort of experience with GNOME 3, but that wasn’t quite the case. While I did run into a couple of issues where the entire desktop would lock up on me, I could never figure out if GNOME 3 itself was to blame, or an application I was running. Whenever it did lock up on me, I seemed to be running a Wine application, so I’m not sure if that’s related.

A more noticeable bug is this:

This is a problem that crept up over time, and simply didn’t exist for the first couple of weeks of using the desktop. Here, the applications located in the system tray sometimes adopt another application’s icon. In this case, Filezilla was fine, but Xchat used VMware’s icon. On some occasions, I’d see broken icons down here as well, or every single icon the same. Since this began occurring, it’s become a given.

Another oddity that developed itself over time is with regards to fonts, though it seems to be a problem specific to a Web browser. I say a ‘Web browser’ rather than a specific one, because the problem is evident in all of them that I’ve tried (Epiphany, Firefox, Chrome). I’ll let the pictures explain the problem since it’s much easier:

This might not be GNOME 3 specific but rather Fedora 15, but I haven’t been able to find the reason for it. On a fresh Fedora install, the font looks similar to Gentoo’s, so I’m not sure what would cause it to go a little funky over time. As mentioned though, this seems to be specific to Web browsers… applications in themselves are fine (the snippets above are from the Transmission Web version; the regular Transmission client looks fine).

For comparison, you can refer to the site where the snippet was taken. While not a deal-breaker, this is the first time I recall running into such a strange issue with fonts when testing out a Linux distro. (Edit: It appears that this particular font issue may be purely Firefox-related. Our related forum thread has more detail.) 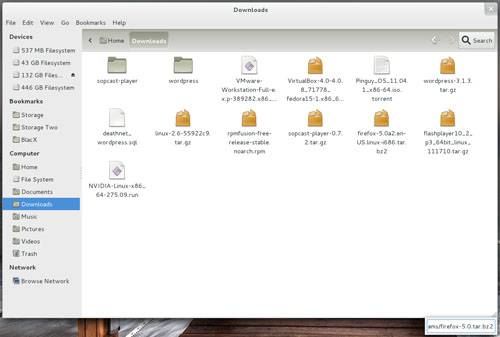 In the end, neither of these bugs are what I’d consider major… just ‘odd’. Aside from these, the desktop does have a couple of unexpected features. For example, when copying and pasting a file or files from one folder to another with Ctrl + V, rather than paste the files in, a text box in the corner shows some of the filenames in text form (pictured above). If you push enter, nothing happens. If you right-click inside the folder and paste that way, the result is as you’d expect. As I copy/paste a lot, this minor issue became rather frustrating as time went on.

GNOME 3 as a whole is difficult to portray through written text, and I’d be hard-pressed to believe that even video of it in action could give you even a basic idea of how everything works. If you are still on the fence about GNOME 3, the Fedora 15 live CD will allow you to test it without having to install it on your system. That’s likely the best way for you to make up your own mind.

Enough about GNOME 3 though, and more about Fedora 15! On the next page I’ll tackle some of the other specifics that Lovelock brings to the table.