One of the first things I do right after a fresh distro install is load up the built-in package manager and see if I can’t get my favorite applications installed without having to go the manual route. Fedora has always utilized the ‘yum’ package manager and nothing changes with 15. While it can be used via the command-line, the PackageKit application will provide a graphical version.

Accessing the tool is as easy as going to the Applications section after hovering over Activities in the corner, and then clicking on ‘Add/Remove Software’. It’s important to note that this tool is not used to update the OS, but rather that task is left to ‘Software Update’ (there’s a strangely named ‘Software Updates’ as well, which will allow you to customize the repositories).

Once loaded, you can simply type in an application to search for, or click on a group and peruse. While clicking the checkbox next to the application and then ‘Apply’ is simple, finding the application in the list is not always so. For example, in the screenshot below I searched for ‘thunderbird’, a rather straight-forward term. But instead of the best result being shown first, the appropriate choice is found way down the list. 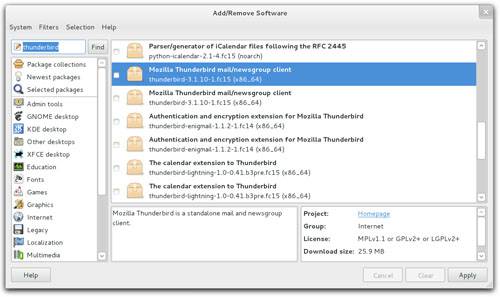 Compared to the software manager in Ubuntu, this is a little bit clunkier in that regard. In Ubuntu, Thunderbird would be listed first and is more obvious to be the right choice. Here, you will need to compare the titles with the actual package name to make sure it’s what you’re looking for. There is a comparable tool to PackageKit in Ubuntu which gives similar listings, but the primary software installer makes things a lot easier.

That all said, throughout all of my testing, I didn’t encounter a single issue with this software installer, so while it may lack a bit with its ease-of-use, it excels with regards to its stability.

Fedora is one of the few distributions to ship with SELinux (Security-Enhanced Linux) by default, but it’s an appreciated touch for those who care about the security of their machine on an application-by-application basis. With it, you’ll be able to adjust certain policies for important system services, and as the feature ties straight into the Linux kernel itself, the level of security offered is unparalleled.

If a potential problem is detected, SELinux will launch and tell you which process is involved and what it attempted to do. From there, you can troubleshoot, or if the problem isn’t really a problem, the report can simply be deleted.

The built-in crash reporter is also a nice touch, allowing users to easily analyze their dumps or submit them straight to the Fedora servers for automated analysis (this is not an ideal solution for security buffs, however, as some personal information may be included depending on the program or crash). 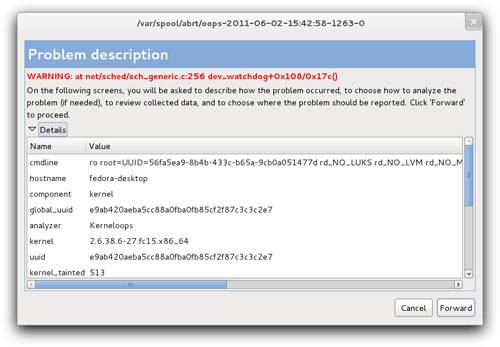 I had a couple of crashes throughout my month of testing, but most, if not all, seemed to be unimportant. Most would appear out of nowhere even when there was no visible crash at all. One example is a crash of the System Settings tool that I experienced; though only to the logger did it appear as a crash. On the surface, it seemed to close just fine.

While a little strange in some regards, it isn’t a bad thing to see notifications like this, because it does allow you to submit a bug report (and you should consider it) so that whatever bug/crash you did experience could be ironed out in the future.

As mentioned in the intro, Fedora strives to be a ‘free’ distro, and as a result, a lot of media support is not available out of the box. Those looking to avoid all commercial / proprietary codecs and software should be fine with this, but for those who are not as faithful to the ‘free’ software side of things as others, a tool called ‘AutoPlus’ helps you get popular software installed fast.

You can visit the official site for instructions on how to install the program, and once done, it will be available in your Applications list. Root access is required since software will be installed outside of the /home folder, so once a password is entered, you’ll see this: 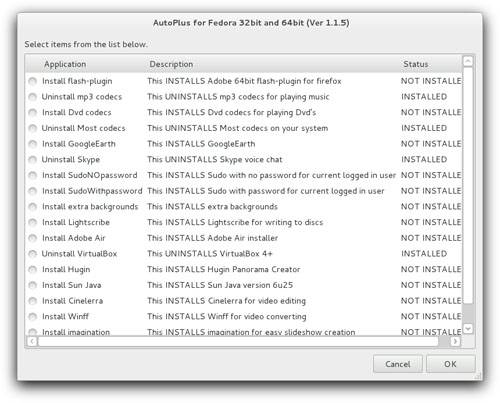 You can unfortunately only install one thing at a time, but doing so is easy. You simply click the respective checkbox and then click ‘OK’. After a few minutes, whatever software you installed will be good to go. In some cases, using this tool is even preferred to installing the software manually. In a personal experience, Skype worked with the install through this tool, while the version I installed straight off of the official website failed to launch.

Like a regular software repository, you’re able to uninstall anything you’ve installed through here, simply by repeating the steps you took to install it in the first place. For those who want proprietary media codecs in their Fedora install, there’s no easier way than with AutoPlus.

I am not sure if the ‘Spin’ Xfce and KDE versions of Fedora result in an identical-looking desktop compared to installing it through the repository, but here’s what both look like when taking that route: 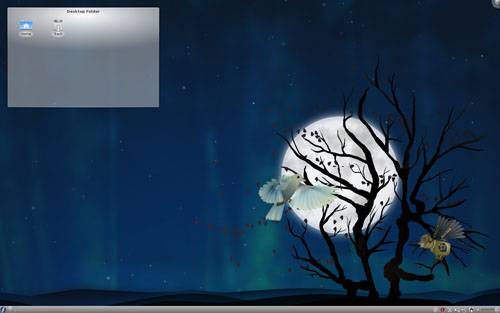 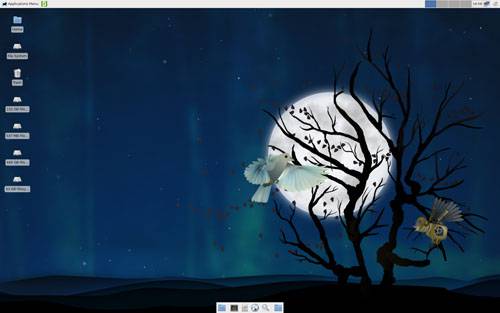 A lot’s been said about Fedora 15 in this article so far, so let’s wrap things up.