Installation of hardware into the Nine-Hundred can be a bit difficult due to the cramped nature of the case, but ultimately went off without any significant problems. The hardware used in this review will be:

While nothing particularly spectacular with this goods being used, it does represent a fairly mainstream PC that most anyone could use. First we installed the motherboard. This was easy and without anything else in the case, was a quick procedure. 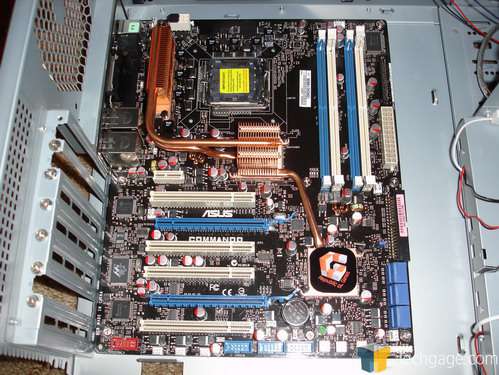 Once everything is installed, we see one downside to mounting the PSU in the bottom of the case. This is mainly up to the positioning of the power connector on the motherboard, and ultimately the boardâ€™s manufacturer, but we can see the 8-pin power cable having to run up and across the middle of the motherboard. This can be problematic because if the case is bumped, the cable could fall into the CPU fan and stop it. I only warn of this because it happened to me. 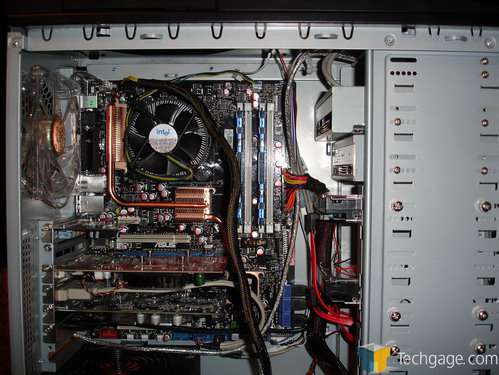 To test out the cooling capabilities of the Nine-Hundred, temperatures of the E6600 will be recorded at an idle state and at full load. This will be repeated with the system overclocked to 3.2GHz at 1.35 VCore.

Our conclusions are somewhat of a mixed bag. While I personally loved the design of the case itself, there are a few things that we feel that Antec could work on and easily improve. The first is the cable lengths. We were unable to connect all of the USB cables to the motherboard because they were just too short. If another inch or two was added to the overall length, the cables would be perfect. Granted, we were running it around a PhysX card, but all motherboards have a low PCI slot and more often than not, it will be populated.

Another complaint is the bottom mounted power supply. While there isnâ€™t really anything that Antec can do about this because all motherboards are different, I do not personally care for a cable running so close to my partially exposed CPU fan. This not only blocks some airflow, but also can stop the fan entirely. Not entirely Antecâ€™s fault, but something that we feel should be pointed out.

One last complaint is the flimsy feel to the side panel. With the panel off, it was easily flexed and bent. This isnâ€™t anything that canâ€™t easily be fixed but in our opinion, Antec really shouldnâ€™t have used such thin metal for a side panel with a window in the middle. I know that the window takes quite a bit of structural strength away from the side and thus, a little bit thicker material should be considered in the future. 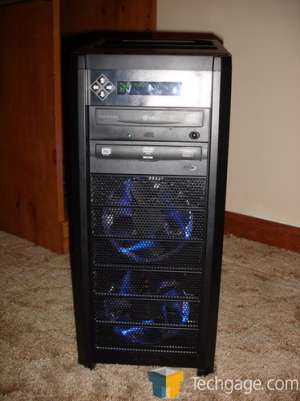 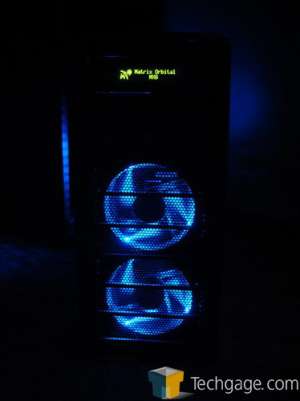 With those two gripes out of the way, we can get to the good stuff. We loved the exterior look of the Nine-Hundred. The front and top was well done and the airflow cannot be questioned. I would not hesitate to recommend this case to LAN party attendees because the size is right and in a crowded room, you can set the fans on high and more than likely, not hear them at all. The window on the side allows all to see your PCâ€™s internals, even though the cramped area inside the case doesnâ€™t allow for the best of cable management.

All in all, I am walking away from the Antec Nine-Hundred a bit underwhelmed. But I also have to keep in mind who and what this case what designed for. All of the things that I do not care for in this case, aside from the weak side panel and the short cables are what make this case so perfect for gamers and ultimately that is the crowd that Antec is going for with the case. I personally like classier designs and for me, I am going to stick with my P180 but to show off a water cooled PC at a LAN party, I canâ€™t think of many other cases that I would rather have my PC housed in. Taking this all into consideration, the Antec Nine-Hundred earns an 8 out of 10. Itâ€™s not perfect for all, but for the gamers, this is a sure bet.