To test the cooling efficiency of the case, I first made sure that the cables inside were tidy and not in the way anything to block airflow. All fans were used, including the extra 1200RPM 120mm fan. Despite an eVGA board being shown during installation, the final testing was completed using a slightly different setup.

All temperatures were recorded using Everest 4.0. The graphs explain the gains from using the case with the fans at the lowest, medium and highest speeds. Two full runs of 3D Mark 2006 were run in order to push the CPU and GPU to its highest levels. Room temperature was 72°F. 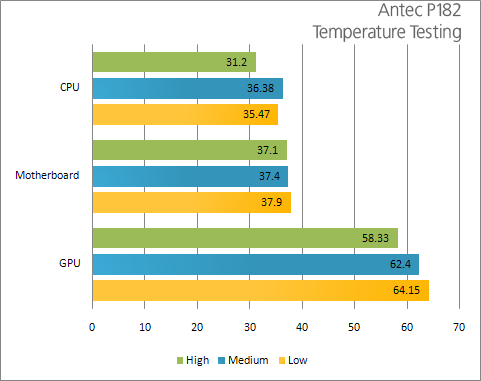 Simply put, Antec’s P182 is easily one of the best cases I’ve ever used. If that quick answer doesn’t satisfy you, allow me to elaborate. When I first received the case, I was unsure how well I was going to like it. After all, I am not particularly a case guy. I’m normally happy by anything that holds my components. After using the P182 however, I became a believer in the reasoning behind why current owners of the case are so pleased.

From the get go, we see innovative design that makes you think, “that makes sense”. The mounting locations of your components helps improve airflow, which for obvious reasons, is a good thing. The case includes three large 120mm fans, two of which are controllable by a flick of a switch on the back of the case. It’s a simple feature, but an appreciated one. 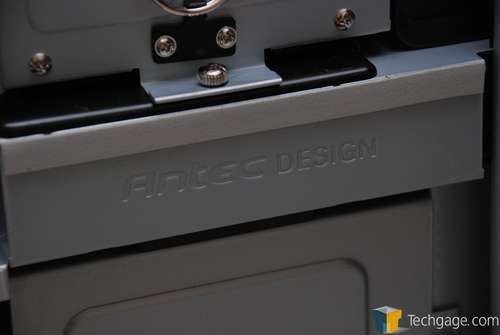 Besides cooling ability, the case is also designed for silence. At its minimum, I can barely hear a fan over the rooms ambient noise. Each door includes three layers in order to help further the dampening, and even the hard drives and computer itself are aided for silence by their rubber mounts. Even your front mounted fans will be quieter than in other cases, since you can keep the door closed while still allowing air to come in through the sides. It’s an innovative case overall.

The biggest reasons to pick up the case may very well be its looks, and price. It’s one of the cleanest looking cases I’ve come across and it’s a pleasure to see it sitting beside my desk. As for current prices, the case costs $150 on average, which is well worth it from every angle.

In the end, the P182 is a case that looks great, is efficient, innovative and is backed with Antecs legendary quality. I have no reservation in awarding this case a 9 out of 10 alongside our Editors Choice.