As to the small power supply, it held up far better than I had thought it would. To stress it, I ran two instances of SuperPi, two instances of Prime95 and a loop of 3D Mark 06 for 6 hours. 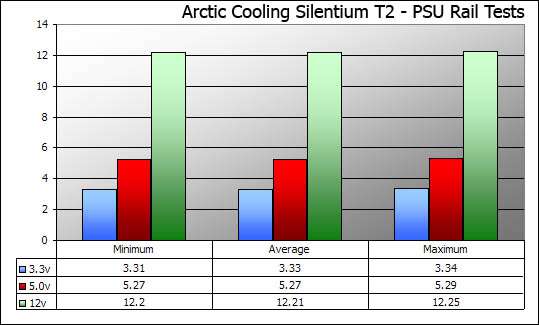 I am very impressed with the performance of the power supply. Near all components were running during the 6 hours, including the power hungry dual core CPU. The largest delta was 0.05, better than anyone could expect out of a PSU that’s included with a case.

Overall, this case has it’s share of pros and cons. Sadly, I feel that the cons outweigh the pros, because I was quite frustrated by the end of installation. The case doesn’t offer incredible cooling, but it keeps everything pretty quiet, which was the primary goal.

Some of the problems I ran into, could have been prevented had their been instructions included with the case. The Arctic Cooling website is not exactly that user friendly, so it took me a while before I found out the instruction manual was available in PDF form. Of course, that doesn’t help anyone who is building their first computer who don’t have access to the internet and a printer. 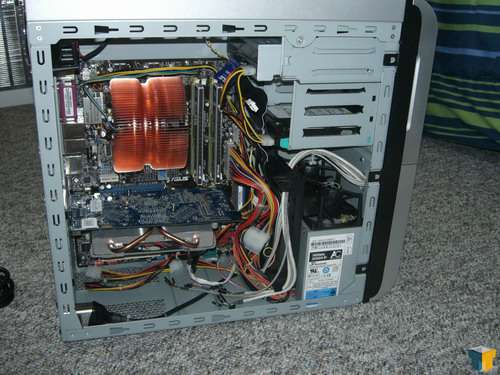 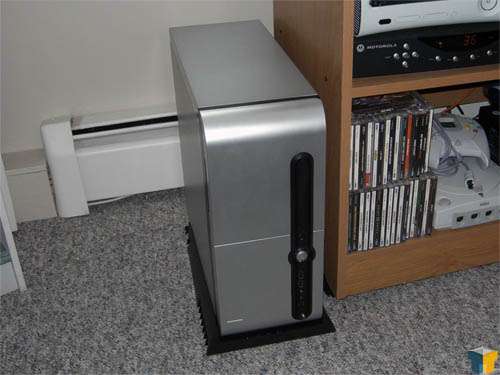 In it’s favor though, the case does have good styling. It’s not amazing, but it isn’t supposed to be. The thermodynamics are well thought out, but it doesn’t really seem to give us a huge advantage at all, which could be due to our already high ambient temps (80°F).

The power supply is probably the biggest gripe of them all though. Granted, it has a peak power of 450W, but it lacks many connecters. If you have more than one S-ATA drive, you are out of luck without a power adapter. The same goes for a PCI-E card that requires a 6-Pin connecter. I truly believe they should have held back on so many Molex connecters and instead included extra S-ATA and a PCI-E connecter. A 24-Pin and 8-Pin connectors able to break off into 20-Pin and 4-Pin, respectively, would have been a huge benefit.

In the end, this is a solid case, but it seems to be strictly suited for an HTPC user with an outdated setup. If the power supply was bulkier and had more necessary connectors, the overall score would be much better. However, as it stands, I am giving the Silentium T2 a 6 out of 10.

If you have the urge to comment on this article, and you know you do, then jump into the related thread. You do not need to register before replying to our content threads.

I am sorry to hear that the Silentium T2 did not meet your expectations.

After inquiring it did seem that the ADI had sent you an old case which was for RMA (damaged platform, no manual,older version of sidewall, newer ones came out 8 months ago and are easier to remove). It was set aside and person responsible mistook it as the case to send to you.

To address the questions you had:

PSU: Our current PSU is powerful enough for most configurations. We tested it in a system with Pentium D840 and ATI X1900XT VGA board. This system draws max. 215 Watts from the PSU. We tested with synthetic benchmarks as well as the 3D Mark 2005. Just recently we wanted to make sure to have enough margin (power wise) for our system we show at the Computex. Our PSU passed loads of up to 450 Watts continuously and 23 Amp. at 12V. Probably a lot of “500 Watt” PSU had failed these tests. There will be just very few configurations that are not working with our PSU (e.g. quad SLI). Further it offers a Power Factor Correction (PFC
) value of 99%. This assures that you just pay the real consumption because apparent and real power are practically the same. A high efficiency of over 75% also shows that we are not talking about a cheap PSU.

It is correct that we just offer a 20 Pin mainboard and a 4 pin CPU power plug. But there is no mainboard that doesn’t work without our PSU. No adapter must be used, 4 pins of the socket will keep empty.

The PSU issues will be solved when we launch a 650Watt PSU (over 85% efficiency) second half of this year.

PCI adaptors are not included in our PSU for the VGA cards as the high end board manufacturers include a PCIe adapter, so it is not necessary for the PC case manufacturer to do so.

We will be coming out with a revision 2 model of our Silentiums second half of this year. The platform (plastic bottom) will be secured to the case, HDD will include a passive heatsink which will be set horizontally rather than vertically. It will be enclosed with a vibration absorption material and PSU will have one 120mm fan to exhaust air out of the case at the front.