by Brandon Mietzner on December 9, 2013 in Gaming

Assassin’s Creed is a series willing to take risks – whether it’s with the story or the gameplay. Yet, as forward-thinking as it has been, it has become the epitome of why gamers dislike sequels; nothing has really changed or evolved since Assassin’s Creed II.

Assassin’s Creed III (our review) did the most to change that; it dabbled in sea-faring combat, but there wasn’t much centered around it. There were of course other minor elements that were added, such as hunting, but they weren’t as successful at captivating the audience’s attention as naval combat was.

Assassin’s Creed IV took the success of naval combat from III and ran with it in full here – the entire game is based around it. You take on the role of Edward Kenway during the golden age of piracy. The game features Blackbeard, rum, booty, and of course, typical Assassin’s Creed flair. One change that many might not expect is that instead of having other assassin’s do the commanding, you do. 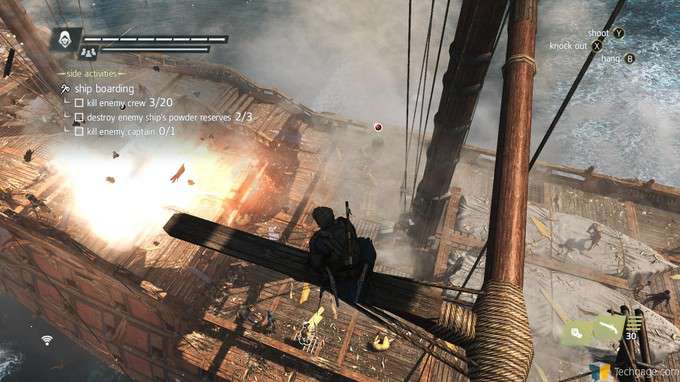 The aptly named Kenway fleet is made up of ships that you have boarded, plundered and captured. A successful capture gives you three options: Fix your ship, lower your wanted level or send to your personal fleet so it can be sent on missions to sell certain items only available in its own mini-game; these missions net you main game currency.

The items bartered in this mini-game can only be gained in the mini-game itself, but a captured ship can be broken down to give you exclusive currency to fix your other ships, which you will do a lot of. With the mini-game aside, the main focus of naval combat is to secure goods so you can upgrade your ship – the only way to do so.

This focus of keeping everything compartmentalized is what drags the game down to the briny deep when it comes to time management. There will be a lot of time spent trying to get the upgrades necessary to take on larger ships to get a bigger haul or even progress through the main story. This adds what I call a lot of “busy work”; sure it was fun, but after the first 20 hours it became a chore and no longer so.

The upgrades are a little bit more relaxed compared to previous AC titles when it comes to Edward Kenway’s gear. There is still hunting and money to consider, but the raw materials can always be bought for his personal outfits and other upgrades for his weapons. This is the exact same upgrade system we saw in the previous game; sadly, so is the free-run and the hand-to-hand combat, which is still just as dull and buggy as ever. 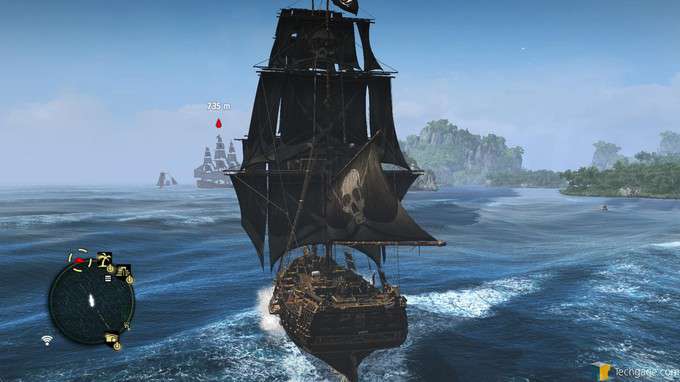 There has been no attention put into changing or fixing some of these core gameplay mechanics. Sure, the naval combat is a nice distraction, but at the end of the day, it’s about Kenway, and how you control him. For example, there were many times I’d be free-running and miss a jump, or he wouldn’t climb up when there was an obvious ledge. This meant I had to do a lot of things over, just like I have had to in the previous Assassin’s Creed games.

As for combat, it is still a button mash – sure, there are counter moves and other weapons to keep it interesting, but those skills are quickly mastered if you’ve played the previous games. Many of the same problems that have been there since the first Assassin’s Creed are still here; the minor exception is that there are many more places to hide, making stealth an easier mechanic to work with (but it still can be unforgiving at times).

A change I was delighted to see is that the optional objectives during the story missions are much easier to achieve than in previous games; sure, you still need to do them a few times to get them all figured out, but they were achievable without timing everyone’s movements and having only one route.

The whole game, not just the story missions, feel more open then its predecessors, but there are still many places you cannot go unless you’ve been there through the main story. This problem limited item collecting, side missions and even upgrading the ship because I felt unsure if there was a problem with the game or if I was doing something wrong. Thus, the game can still confuse what you can and cannot do. This obviously shows us that some improvement has been made to the gameplay, but sadly none of the major complaints have fully been addressed. 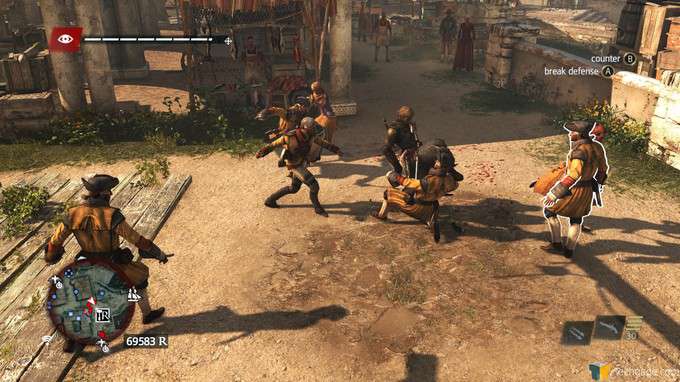 A new kind of adventure to the game comes in the form of underwater salvage side missions. These locations certainly look much more fantastical, but gameplay-wise they change a lot of the rules on you: The controls, limited amount of air buoy’s to help you, holding your breath, hiding from sharks, not hitting sea urchins, and etc. This idea might have sounded great on paper but I had several issues with it.

To elaborate on my plight during these expeditions, I would try and turn in to a sunken ship by making a sharp turn but wouldn’t be able to make it in. Thus, I would get eaten by a shark or I would lose more air, have to turn around and come at the hole straight on. This is yet another horrible control mechanic that needs to be fixed.