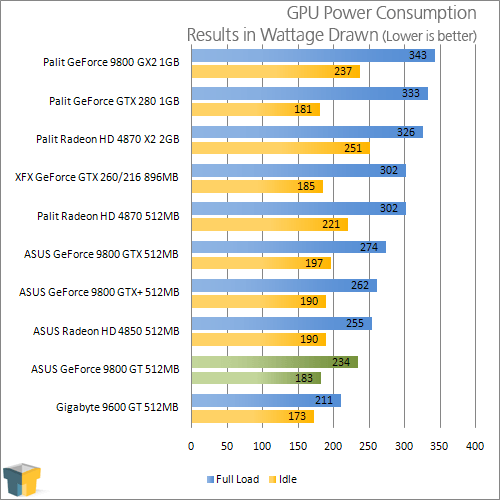 With default clocks, the power consumption scales with the 9600 GT, and falls right behind the HD 4850. The included iTracker software allows you to go into a power-saving mode that will decrease the power even further when the GPU isn’t being used for 3D graphics. With stock speeds, our ‘idle’ wattage was 183W, while with the power-saving enabled, it was 165W.

From a value standpoint, the 9800 GT is a great card. Most such cards hover around the $100 area, which makes it appropriate since many 9600 GT’s can be had for around $80. The performance differences between the two aren’t major as you’d expect given the majorly increased number of cores, but it’s a good boost nonetheless.

Beyond the 9800 GT would come the HD 4850, by an additional $30, and for an average of $20 more than that, we get the even faster 9800 GTX+. There are so many models on the market right now, that the FPS/$ ratio is very good, and no matter what card you pick up, you’re generally going to get what you pay for.

In the case of this particular card, I’d have to say it’s not worth the cost-of-entry. It currently retails for $149.99, and for almost the same price ($160), you could score a much faster 9800 GTX+. If you happen to take advantage of mail-in rebates, then this card will end up costing you $129.99, which makes it a little bit easier to stomach. But again, there are many more 9800 GT’s available that go even lower. Some, as I mentioned, even go as low as $100. 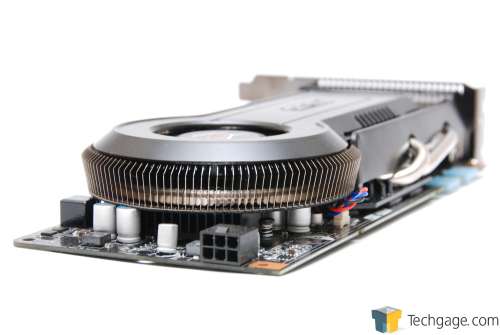 What ASUS’ card does offer is extremely low noise when at idle. It’s so quiet… you’d swear it was using a passive cooler. Still, given the cost, it almost would have been nice to see an actual passive cooler, because at least then, this card would have a very important redeeming feature.

All in all, the 9800 GT is a good card for the money, and delivers a great value. But for even better value, this particular model should be avoided. ASUS themselves offer other 9800 GT’s that cost less than this (one is $109.99 after MIR at NewEgg, currently), which aside from the cooler, has almost identical specs to this one.