The most unique feature of the P5E3 Deluxe is the fact that it contains an embedded Linux, thanks to the folks at Splashtop. Essentially, there is a chip on the motherboard that contains a pre-configured version of Linux that will allow you to boot up your PC and be able to surf the web within seconds.

While the overall usefulness can be argued, it’s a technology that’s bound to catch on, especially with media-specific motherboards and notebooks. Take this one scenario. You thought you were finished with your PC, so you shut it down… and suddenly curse yourself for forgetting you needed to look up a piece of info online.

No problem. Boot back up, enter the Splashtop environment and load up the browser and have a go. Instead of waiting for a few minutes for the PC to boot itself back up, you could be in the Splashtop browser within 15 seconds of turning on the machine. That’s where Splashtop will be most useful.

How does the process work? After booting up the machine, you will be greeted with this screen: 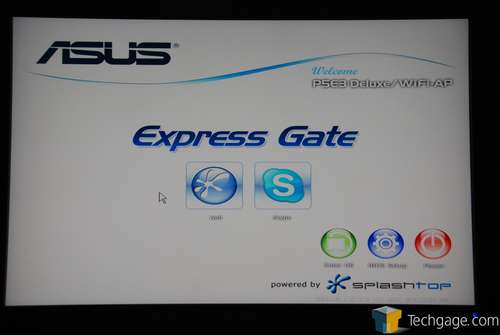 From here, you will be able to forgo the Splashtop environment and continue booting, or go straight into the BIOS setup. By default, the computer will continue to boot if nothing is touched for ten seconds. If you do want to head into the embedded environment, you can click on Enter OS, Web or Skype to be brought in.

If ever there were a lightweight Linux, Splashtop might be it. It’s well-secured, so you will not even be able to hit up a terminal, or install anything, or even save anything. It’s a small OS that’s designed to allow people to get online quicker and talk to their Skype contacts (even with a Mic!). 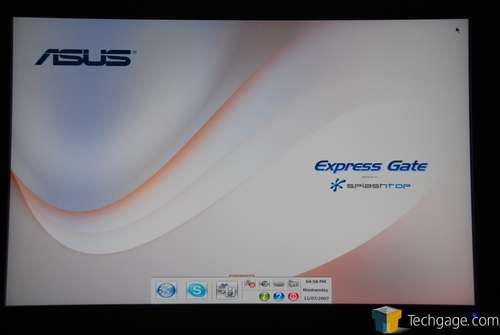 Nothing is really complicated here. If the distro doesn’t set up your peripherals to your liking, there are a few minor tweaking options. The highest resolution available is only 1440×1050, but again, this doesn’t matter, since the purpose of the OS is specific.

Once booted in, you might be able to hop online right away, but if not (like me), you will need to go into the network configuration and un-check the LAN port that you are connected to and re-click it for it to configure itself. If under a DHCP connection, this will be simple. If you are not, then setup is a little more time-consuming, but I am sure you are well aware of that.

It goes without saying that Express Gate is more of a technology demo than anything, because most people who purchase the board are not going to stick with a minimum OS. However, it does show us what’s to come, and the future looks good. If implemented on a notebook computer, for example, the battery-life should be far extended due to the fact that many components are not being pushed to the fullest degree – especially the hard-drive.

I am looking forward to seeing how Splashtop will update their embedded Linux and also to see who else will be implementing it into their own motherboards. For even more information, you can head on over to the official site.