The P5E3 Deluxe WiFi is easily one of the most robust X38 offerings available and will do well to please anyone who manages to get their paws on it. The higher premium hurts a bit, but when taking into consideration how feature-packed this board is, the price is made easier to stomach. Not to mention that the DDR3 memory that the board requires will likely cost as much as the board itself, if not more.

The board has not just a few, but many redeeming features. One of the more obvious would be the ExpressGate embedded Linux feature, but that will be more of an acquired taste than anything – one that not too many people will be too interested to dabble with. But it’s cool-factor is evident and we can only hope that Splashtop continues to regularly update the OS.

From a layout standpoint, this board is near-pristine… a total rarity. Everything is in a convenient location and the fan connectors are plentiful. During installation, there was nothing that struck me as odd, although the fan connector beside the north bridge and WiFi card can be a little tricky to get to once everything is installed. That gripe is so minor, it’s almost non-existent.

While not necessarily new, it’s nice to have the board passively cooled, thanks to the heaps of copper. As mentioned earlier, two chipset fans are included if overclocking is in the cards, but I didn’t personally find much of a difference in overall overclocking ability with or without them.

Speaking of overclocking, how did the P5E3 perform? How does 460FSB with a Quad-Core sound? 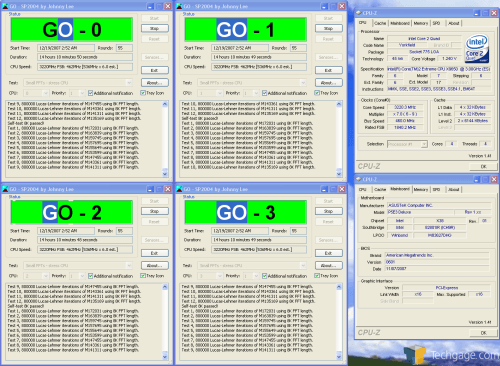 I didn’t test out the overclocking ability with a Dual-Core, but chances are that would result in ~470 – 475MHz on the FSB. There is no question in my mind that anyone who has intentions of purchasing this board also has plans to throw a Quad-Core processor in there. I don’t know too many who would purchase a $700 motherboard/RAM combo… to chuck a Dual-Core in there. The same overclock was achieved on two P5E3 Deluxe motherboards, so I am confident that’s the maximum most people will see.

It goes without saying that I recommend this board to anyone who wants a feature-rich offering, but of course it’s not for everyone. The biggest issue here is total cost, and not just for the motherboard itself. Cheap DDR3 2GB kits retail for $300, while 4GB DDR2 kits can be had for half that. It’s a tough situation and totally depends on whether or not you want to have the “latest and greatest” or save money and stick with another solid board, such as the Maximus Formula. 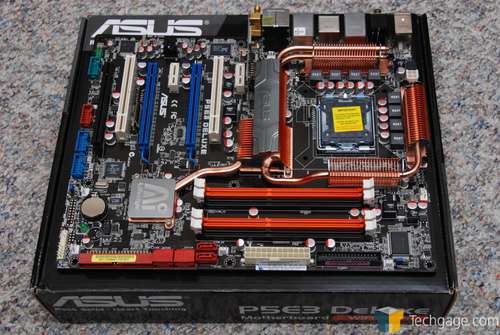 If I were personally building a DDR3 PC, this is the board I’d choose due to the feature-set and stability. For the hardcore overclockers, the Maximus Extreme would be a better choice as it includes better cooling, water-cooling for the north bridge and more features to cater to the OC’ing enthusiast. We will have a review of that board shortly.